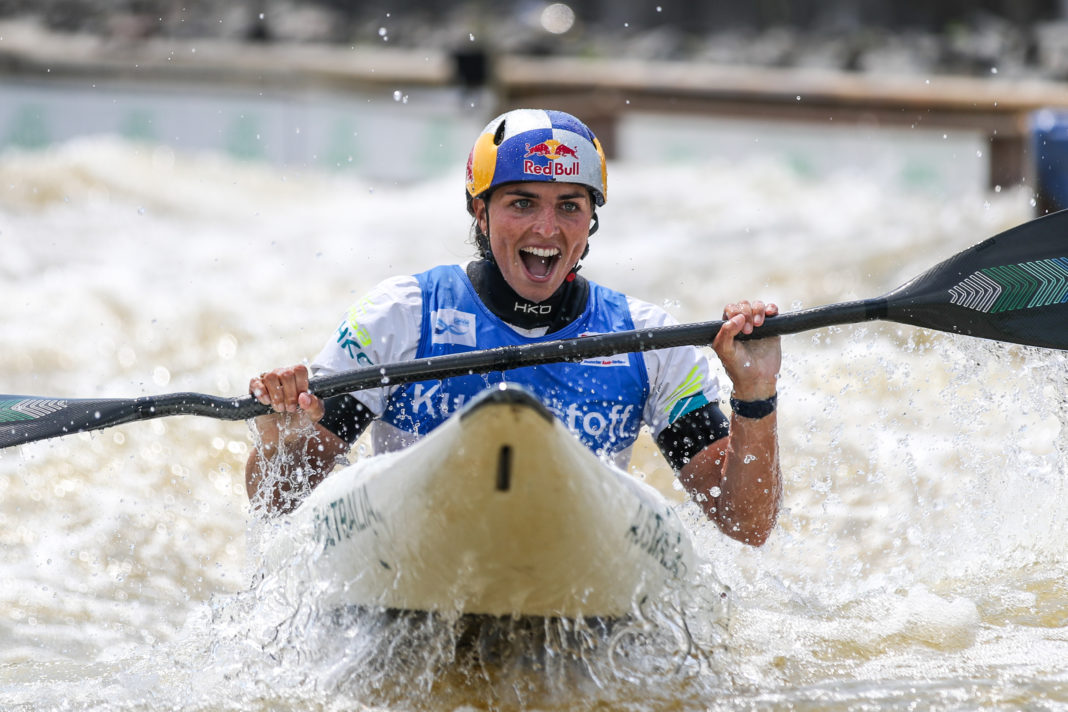 Australia’s Jessica Fox stunned the international canoe slalom world on the second day of the 2021 ICF Canoe Slalom World Cup #2 in Markkleeberg, Germany, when she took home the win in the women’s K1, in a race that was titled as ‘out of this world’ by her competitors. The win comes despite a two-second penalty for a gate touch, but in a stunning performance on the rest of the course, the three-time K1 world champion and dual Olympic medallist never left any doubt that she will be the one to beat come Tokyo.

“It was a great run and I’m really happy with that race. To make a little mistake at the top but really push hard into the finish and pull off some hard moves at the end, I was really pleased with that,” a beaming Fox said after her race.

“I didn’t feel great at the top, maybe a bit of nerves and a bit tentative, but as soon as I got out of that middle section I knew I really had to go for it on the bottom and not give any time away so I really attacked it and went for the riskier direct move on gate 22 and 23 and managed to pull it off. So really pleased, really pleased today,” Fox analysed her run.

The 27-year old was also full of praise for her German competitors, after beating them into second and third on their home course, especially for Ricarda Funk, who she will be lining up against in Tokyo again.

“Ricarda is an incredible competitor and she always races super well. She’s always present for the big finals and every race, the heat, the semi. I knew she would be really difficult to beat here but it’s never been the intention to come here and beat her or any competitor. It’s always about putting down my best runs and to see where that places me. So it’s really special to share the podium with the two German girls. It’s really special and I’m very happy to take the win.” It is the first World Cup season since mid-2019 for Australia’s Olympic team canoe slalom paddlers and it’s almost two years since Fox stood on top of the podium in the K1 and C1 at the 2019 ICF World Cup Final in Prague in August 2019. Taking home the double World Cup win was followed by two silver medals at the 2019 ICF Canoe Slalom World Championships in La Seu Spain with both results locking in her Tokyo selection.

“At Seu at the world champs I was second, but still really pleased with my race, so I think it’s extra special to put down a fast run that I’m proud of and that wins,” Fox said.

Jessica Fox and Noemie Fox have also both qualified for Sunday’s women’s C1 semi-final, which will be another chance for a medal. For Tokyo team mate and Rio Olympian Lucien Delfour the World Cup in Germany did not go to plan, after he finished the semi-final with two 50-second penalties and a two-second penalty for a gate touch.

“I had a bit of a shocker to be honest. At gate two I was too tight and I missed it. I kept on going and I tried to keep the lines really tight and I missed out again on gate eight all together. That doesn’t happen very often and it’s frustrating. Usually we get 50 at gates, because we are a bit tired, especially at those upstream gates and the head is not fully in but this time, I completely missed the gate, which is really frustrating and not very usual at all,” Delfour summed up his race self-critically.

Despite the unexpected mishap, Delfour was still thankful for the opportunity to be finally back on the international racing circuit.