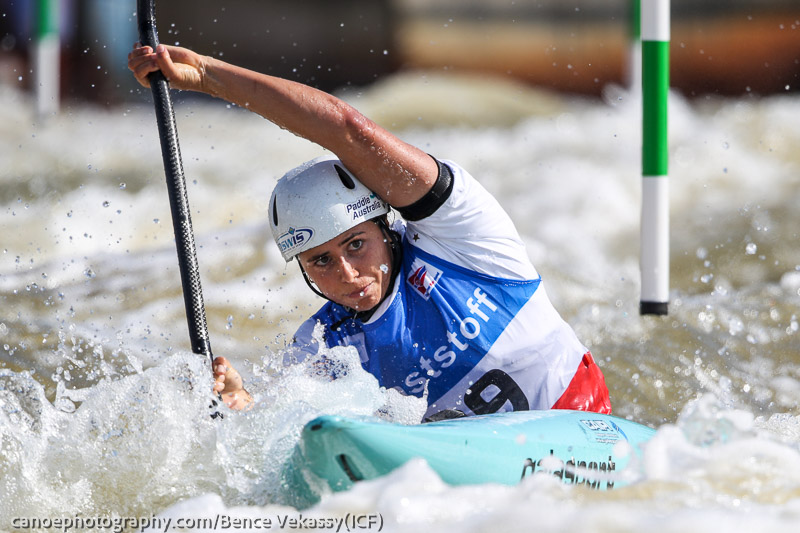 Jess Fox, Lucien Delfour, Dan Watkins and Noemie Fox progress to next round of racing

The summer heat arrived in Germany and so did some hot Aussie World Cup racing with all of Australia’s Tokyo bound canoe slalom paddlers progressing straight through to Saturday’s and Sunday’s semi-finals on the opening day of the 2021 ICF Canoe Slalom World Cup #2 in Markkleeberg (Leipzig), Germany. Australian Olympic Team paddlers Jessica Fox, Lucien Delfour and Daniel Watkins, as well as Australia’s Noemie Fox were on fire and only needed one run to qualify for the next round of racing.

It is the first World Cup season since mid-2019 for Australia’s canoe slalom paddlers, who are making the most of their opportunity to race the world’s best with only 35 days to go to the Tokyo 2020 Olympic Games.

Australia’s greatest canoe slalom paddler of all time, Jessica Fox, comes to World Cup #2 after a successful Olympic season opener at World Cup #1 in Prague last weekend, where she won won kayak bronze and canoe gold. Fox will be doubling up in both events in Tokyo and on Friday a second place in the women’s K1 and fourth in the C1 heat were enough for the three-time K1 and four-time C1 world champion to progress straight through to the semi-finals. This marks a successful return to racing for Noemie Fox, who focussed on her master degree and some professional opportunities during the COVID-travel restrictions last year.

“It was really good and I had no idea what to expect really and there were lots of cobwebs to dust off in kayak. I also just changed boats recently. The course is really hard and there a lot of stoppers but I made it through in the first run which has never happened in a World Cup so I’m very excited,” Noemie Fox said after her kayak race.

“It’s really hot so the ideal game plan was to just do one run in each class, that was the main goal. My other goals during these races were to just get the feeling back, enjoy it, as we haven’t had world cups in such a long time and I’m super happy to be here. It’s great conditions, everyone is respecting the COVID restrictions, it’s hot and sunny and the course is really tough but really great, so I think it’s perfect conditions for a World Cup,” Noemie Fox added after racing in sweltering conditions on a technically challenging course.

Tokyo bound Lucien Delfour, who won a silver medal at his last World Cup on the same course in 2019, also progressed through to the semi-final, finishing 13th overall in the men’s kayak heat on Friday, despite two touches and four seconds in penalties.

“I was happy with the top section, half way down I decided to take a bit of a risk, which didn’t really pay off, so four seconds of penalties is not amazing but it’s still a good raw time,” Delfour reflected on his race.

“It’s always a relief to get through in the first run. It’s not as hot as Tokyo will be, it’s beautiful summer really and quite enjoyable, so I’ll just keep cool and stay in the hotel until tomorrow.”

Fellow Tokyo team mate Daniel Watkins, who will make his Olympic debut in Tokyo, wrapped up a successful first race day of racing for Australia with a top-three finish in the men’s C1 heat and the fastest raw time, boosting his confidence ahead of Sunday’s semi-final.

“It was a very good run. I started off a little shaky and took a touch at the top and lost a bit of time in the first upright but after that the run really came together. It was nothing like amazing, the boat ran really well which was my plan to just take safe lines and keep the boat moving and it worked really well. I think the pace is pretty good and I got a lot left on that run I reckon, so feeling good for Sunday,” Watkins said after his race.