Australia’s most successful canoe slalom paddler of all time Jessica Fox will head into the Tokyo Olympic Games with two 2021 World Cup gold and one World Cup bronze added to her name, after wrapping up the 2021 pre-Olympic World Cup series in Germany over the weekend.

In her only international racing ahead of the Games, Fox won gold in the women’s K1 on Saturday at the second ICF Canoe Slalom World Cup in Markkleeberg/Leipzig (18-20 June 2021), adding another medal to the C1 gold and K1 bronze she won at the ICF Canoe Slalom World Cup #1 in Prague, CZE last weekend (11-13 June 2021). The three-medal haul, including two gold, was followed by a fourth place in the women’s C1 on Sunday.

It was the first World Cup racing since mid-2019 for Australia’s Olympic team canoe slalom paddlers and the first times back on a World Cup podium for Fox since her World Cup final win in both the K1 and C1 in August 2019, following a COVID-disrupted 2020 season.

On the last day of the two-event pre-Olympic World Cup series, the three-time K1 and four-time C1 world champion, pushed the boundaries and took some risks which in the end saw her finish outside the podium in fourth and +11.27 seconds behind Germany’s reigning world champion Andrea Herzog in first. Tereza Fiserova (CZE) and Austria’s Nadine Weratschnig finished second and third. 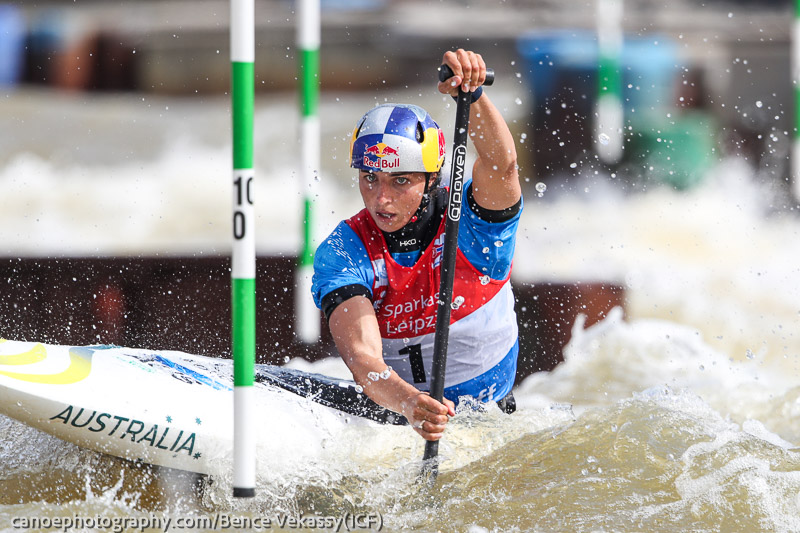 “I tried to push the boundaries, cut the lines a little bit, changed my tactics. Some of it paid off, but two big mistakes meant that it’s fourth place. But I think that’s what these races are about, trying things and getting back on the start line. Andrea (Herzog) put down an amazing time to start with and I was really hoping to chase that, but not today. It wasn’t the run I was hoping for in the final,” Fox reflected on her final run.

Last weekend, Fox won the C1 final with over four seconds ahead of Herzog, but in the final on Sunday, the Leipzig local, who will represent Germany at the Olympic Games, was the only paddler to put down a clean run on her home course.

“It’s a hard course, the whole way down from the first gate until the last gate you got no breathing space and you really got to keep pushing and attacking. I had a good semi, tidy, clean, but I knew I had to step up for the final. So I tried to change my tactic in the middle and on the top section as well to try and squeeze out extra time,” Fox analysed her run that saw her finish outside of the podium.

It was a whole different story on Saturday though, when Fox stunned the international canoe slalom world with a win in the women’s K1 that saw her an impressive 3.52 seconds ahead of Germany’s duo of Ricarda Funk in second and Elena Apel in third and in a performance that was titled ‘out of this world’ by her competitors. “I was really really pleased with my K1 run and I think it’s extra special to put down a fast run that I’m proud of and that wins. It’s always about putting down my best runs and to see where that places me and it was really special and I was very happy to take the win.” Fox said about Saturday’s final.

Following her gold and bronze from last weekend, another gold this weekend, plus a fourth place finish, Fox was pleased with her overall World Cup performance just under five weeks out from Games.

“Overall there has been really good paddling and I’m really pleased with the way I’ve raced and there have been good runs across the board from the heats to the semis and to the finals, so I’ve got a lot to take away and work with and now it’s just that final stretch to Tokyo,” Fox said. Following her C1 gold in Prague, as well as the K1 gold in Markkleeberg, the current K1 and C1 world number one, will be heading into Tokyo as a double-medal prospect in both events. It will be the first time Fox will double up at the Games, with the women’s canoe events set to premier on the Olympic program in Tokyo.

In Germany, Jessica Fox was joined in the C1 final by her sister Noemie Fox, who progressed through to the final with a tenth place in the semi.  But missing a gate in the final, followed by a couple of gate touches saw her finish eighth overall and repeating her result from the World Cup last weekend.

“I’m pretty gutted because I felt so good on the course and my speed is there. I’m super happy though to have been able to make the two finals at both world cups. But in the final today (Sunday), there were lots of errors, a tricky course, and a fifty (seconds in penalties) for me, plus six but I think there are a lot of good elements to take away,” Noemie Fox said after her run.

“There was lots to adjust to on the international scene, which is why I have been so happy to be able to integrate the top ten on every single one of my C1 runs, including the quals and that’s a big positive for me.  Now it’s about fine tuning for the rest of the season,” Noemie Fox added about her promising performance after a long time away from international competitions and aiming for the world championships later in the year. But first, it will be cheering on her sister, as well as the rest of the Australian team, in Tokyo.

In the men’s events, Australian Olympic Team paddler Daniel Watkins, who will make his Olympic debut in Tokyo, bettered his result in the men’s C1 from the first World Cup by three spots to finish 17th overall in Germany. The Tasmanian showed good speed at both World Cups finishing fifth and third in the heats respectively to progress through to the semi-final round and was thankful for the opportunity to race the world’s best in Europe ahead of the Games.

“There were definitely good bits in it, but we’ll have to go back and review it all. The speed is there and we have another month. It’s been pretty important to be back here, it’s been so long and it’s been nice to race the world and see where we stand. We are heading back to Prague tomorrow and then over to Paris for a week before we go to Tokyo next month,” Watkins outlined the plans ahead. For Tokyo team mate and Rio Olympian Lucien Delfour the World Cup in Germany did not go to plan, but after a 13th place at World Cup #1, he also remained positive for the next few weeks ahead of Games.

“I had a bit of a shocker here in Leipzig to be honest. That doesn’t happen very often and it was frustrating,” Delfour summed up his semi-final race self-critically. Like Watkins he was thankful for the opportunity to finally be back on the international racing circuit though.

“It’s always a good experience being able to travel again and paddle on different courses, so it’s been a good experience overall. I’m looking forward to get to paddle on the Paris 2024 course for the first time over the next couple weeks, which is pretty exciting and then it will all be about Tokyo,” Delfour said about the plans ahead. Australia’s Olympic Team paddlers will stay in Europe over the next few weeks, before heading to Tokyo at the start of July for an ICF training camp on the Olympic course ahead of the start of the Games and the start of the Tokyo 2020 Olympic Canoe Slalom Competition from 25-30 July 2021.

Races can be reviewed here: https://www.canoeicf.com/

All results can be accessed here: https://www.canoeicf.com/canoe-slalom-world-cup/markkleeberg-2021/results