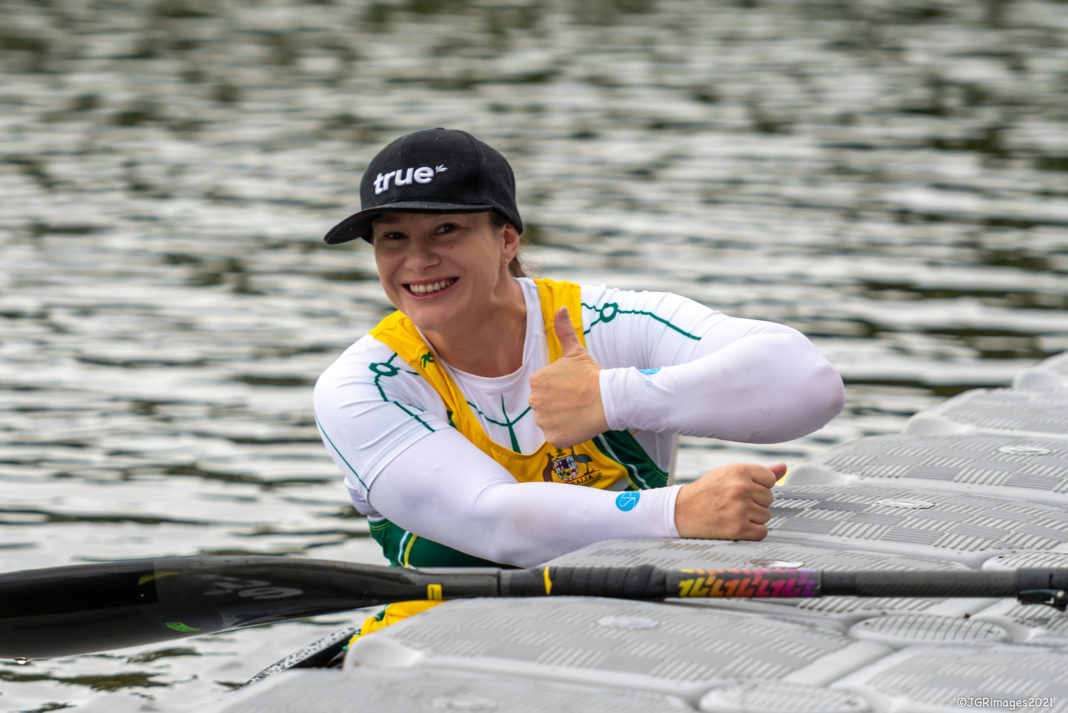 158 days out from the start of the Tokyo 2020ne Paralympic Games Paddle Australia’s paracanoeists Curtis McGrath (QLD), Susan Seipel (QLD) and Dylan Littlehales (NSW) have their Tokyo tickets in sight, after fulfilling the Paddle Australia nomination criteria in their respective events at the paracanoe selection racing at Sydney International Regatta Centre on Thursday (18 March).

It’s been a long wait for Australia’s paracanoeists, but on Thursday they once again proved they are world class and ready to wear the green and gold at the Tokyo 2020+1 Paralympic Games in five and half months’ time.

“It’s really cool to be here.  It’s nice to be back in Sydney, racing on an international course and having the opportunity to race Dylan and the new guys coming,” Paralympic champion Curtis McGrath expressed what everyone felt after a year away from competition.

After fulfilling the nomination criteria in both the kayak and the va’a (outrigger canoe) and following the addition of the va’a to the Paralympic program, the 10-time world champion is set to compete in two events at Tokyo 2020 – the KL2 and VL3.

“We had to work a lot on the V1 and trying to get the numbers up in paracanoe and getting it added to the Tokyo program and it’s nice to be have the chance to race both boats and I’m grateful for this opportunity.  To represent Australia is the ultimate goal and hopefully I can stand on top of the podium twice too,” McGrath said.

Until then, there is still a bit of work to be done, but McGrath is confident he is on the right track.

“There’s still a lot to do in refining those little things and working on my starts.  I’ve had the opportunity to train with the Olympic women’s squad over the last couple of months and that’s been really good and invigorating to always have someone to chase and push, so it’s been nice.”

“Tokyo is going to be different. The overall experience will be somewhat diminished by the whole COVID situation, equally it’s so nice to be able to represent your country and hopefully we’ll all get the opportunity to compete,” McGrath added.

Paralympic silver medallist Susan Seipel is also set to get the chance to represent Australia in two events following Thursday’s racing.  Racing in her brand-new green and gold boat, she ticked the box and met the nomination criteria in both the kayak and va’a and could not stop smiling after finally being able to race again.

“I was smiling on the start line and was really excited to be back racing.  I do really love the racing part of it.  It was like déjà vu from 12 months ago, but no one could have predicted what was going to happen.  It is what it is and I don’t think it has been detrimental in our training.  I’m just super excited to have the opportunity to compete in both classes in Tokyo.  I’ve always dreamed about it since I started, so it’s really good to have the opportunity to race both of them,” Seipel said.

The team will continue racing this week as well as at the Paddle Australian Canoe Sprint Championships in May and will continue their race preparation in the lead up to the Games.

“I will just be working on getting faster and working on the sprint as we’ve been doing a lot of aerobic stuff over the longer season.  Now it’s time to fine tune all the little sprint things that we need to work on,” Seipel said about the tasks ahead.

“I’m cautiously optimistic about Tokyo.  It will definitely be different but nonetheless I’m in pretty good shape and I’m hoping to get even faster before then, that’s the main thing and I’m excited for that.”

Paralympian and team youngster Dylan Littlehales has definitely been getting faster and has shown one of the strongest improvements among Australia’s Paracanoeists over the last five years.  He has been one of the team members who most likely has benefitted the most from the Games’ postponement.

He won the kayaking event at SIRC in a strong time, fulfilling the nomination criteria for the KL3.

“That was a fun race and it’s just good to get back out here, back on the water and get a couple races back in the (starting) gates.  It’s important coming into a Paralympics to race on an actual course and other athletes in a competition environment,” Littlehales said.

“I’m definitely one who benefitted from the Paralympics postponement a lot more than others.  It gave me the chance to just step back for a month or two and reset.  It also gave me another year of development.  I would have been going at 20 years old to Tokyo, now I have that extra year and will go as 21-year old, which is a huge developing age in kayaking.”

While Rio 2016 Paralympians Curtis McGrath, Susan Seipel and Dylan Littlehales have the nomination criteria boxed ticked, fellow Rio Paralympian and Paralympic silver medallist AJ Jennings (former Reynolds) will go into a race-off with Paralympic wheelchair medallist Kathleen O’Kelly-Kennedy on Friday, after a tight battle to the line on Thursday.

The growing depth of paracanoe in Australia was exciting to see at Thursday’s trials with the Western Australian Institute of Sport squad of Ben Sainsbury, Mark Daniels and Kathleen impressing selectors with strong performances as paracanoeing continues to grow in Australia and on the road to the Paris 2024 Paralympic Games.

Australia already secured all four Paralympic quota at the 2019 ICF Canoe Sprint World Championships and following the Paralympic trials today and the added race tomorrow, Paddle Australia selectors will make their decisions and nominate athletes to Paralympics Australia for selection for the Tokyo 2020 Paralympic Games to be held .

Tokyo will only be the second time that paracanoe will feature on the Paralympic Games program.

Head to the Australian Paddle Team on Facebook for interviews, results and updates from the event: www.facebook.com/auspaddleteam