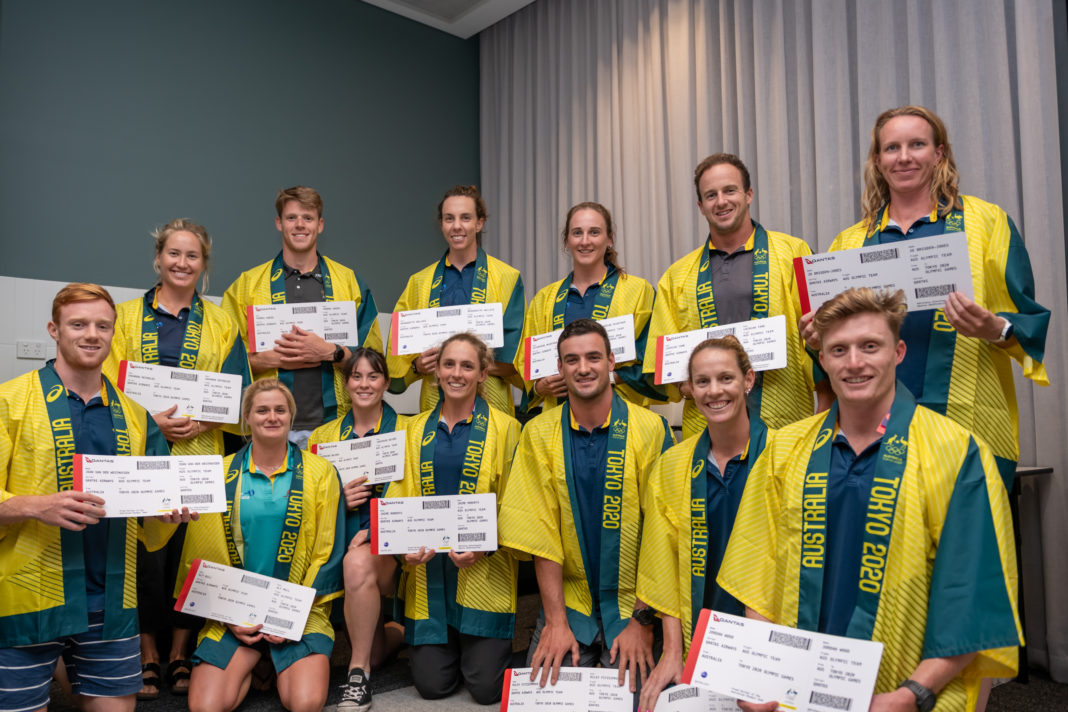 Paddle Australia’s canoe slalom paddlers were already selected by the Australian Olympic Committee (AOC) at the end of February 2020, while canoe sprint was one of the last teams to secure their AOC selection on 26 March 2020, two days after the Tokyo 2020 postponement was announced.  This meant they had the peace of mind to have secured their spot, but with the first round of COVID-lockdowns already in place, the team only ever got to celebrate virtually – until this weekend.

“I got to cut the celebration cake and share it with my team, the paracanoe and slalom team and support staff.  Last year I ate the whole cake by myself,” Bernadette Wallace (SA) laughed.

“But seriously, Friday night we finally got to celebrate as a team, with the amazing athletes and support staff that have carried each other through this year of uncertainty.  We finally celebrated our Tokyo selection but also the adversities we have overcome this year to make it to that room,” Wallace added.

Wallace will make her Olympic debut in the women’s canoe events which will premier at the Olympic Games in Tokyo.

“It was nice to get a team photo without a zoom filter on my face,” Wallace’s C2 partner Josephine Bulmer (SA) joined in with a smile.  “I thought it was really great to be able to celebrate with the team in person and bounce off the excitement we all have for each other.”

The celebration event took place in Penrith where the team spent from Wednesday to Sunday (17-21 March 2022) at a Tokyo 2020+1 Simulation Camp, which included the team celebration on Friday as well as a full Tokyo 2020 Canoe Sprint race program at Sydney International Regatta Centre (SIRC).  It was the first racing opportunity on an international class course for the athletes since selection trials at SIRC in 2020.

“I am so grateful the event has been able to go ahead as it is a huge opportunity to be able to prepare for Tokyo in the best way possible.  We race for only two minutes, but nailing the preparation for those two minutes is what the goal was for me this week,” Wallace said.

A sentiment echoed by Jean van der Westhuyzen (QLD), who will also be heading to his first Olympic Games and has been racing both the men’s K1 as well as the K2 1000 together with fellow Games debutant Tom Green (QLD) this week.

“It was great to be able to come together as a team and celebrate being part of a special Olympic team.  Plus, it’s been fantastic to get some racing under the belt.  It’s good to have that sort of race feeling after not having races in so long.  With four months to go we have some time to build on performances and really try nail the next training block.  I’m really looking forward to it,” Westhuyzen said.

Green also took out the win in the men’s K1 1000, with the team youngster continuing to go from strength to strength following his clean sweep in the K1 selection events in 2020.

“I feel pretty good and it was good to get back out on the course and do some hard racing.  It’s good to be back.  I’ve been going well with Jean and it just feels like we continuously improve and continuously just learn from each other and the boat and I’m pretty excited and stoked to be part of that team.  That 12 months gave us a lot of time to do all kinds of training and work on areas we wouldn’t have been able to, so it’s been good,” Green also tried to look at the bright sides of the postponement.

Following a week of racing in strong rain, Green added jokingly, that “the humidity was about the same than in Tokyo,” thus perfect for a simulation camp.

“It was tough conditions and I think Tokyo will be quite tough as well, bumpy and windy so this was just practicing for the worst and hopefully it will be better.  But if it’s not, we’ve trained in it, raced in it,” Green said.

While it will be the first Olympic Games for Wallace, Bulmer, Westhuyzen and Green, team mate Jo Brigden-Jones (NSW) will be heading to her second Games after also racing at London 2012.

Like the rest of the team, Brigden-Jones was also grateful for the joint team celebrations, which also included the formal presentation of Tokyo 2020+1 Qantas flight tickets as well as the AOC ASICS Hapi Coats, which were presented by AOC Vice President Helen Brownlee AM.

“It was great to get together as a team and have more of a formal presentation and celebration for making the Tokyo Olympic team.  It was a shame we couldn’t have the celebration last year straight after we qualified and it was strange trying to celebrate at home without your teammates and knowing the Olympics were now 17 months away,” Brigden-Jones reflected on the situation 12 months ago.

“It was really nice to see everyone in their hapi coats and with our giant Qantas boarding passes as we finally got the team together.  Murray Stewart was unable to be there, but it will be great to be all together training on the Gold Coast in the lead up then in Tokyo, which seems to be sneaking up on us quickly.  Each day we recognise the importance of making each training session count and searching for all the improvements we can make,” Brigden-Jones said.

Brigden-Jones lined up at SIRC with her fellow women’s K4 paddlers Cat McArthur (SA) and Western Australians Jaime Roberts and Shannon Reynolds, who are all heading to their first Games and also raced the K2 together with Jaime Roberts as well as the K1.

“It’s been so good to be back racing at Penrith for this simulation regatta.  Utilising the start gates is always so beneficial for our races.  It’s hard to replicate those pre-race feelings and nerves in training, that’s why it’s been so good to be on the start line again and putting together what we have been working on in training,” Brigden-Jones explained the significance of the camp.

“The simulation has also been about the mental preparation with getting used to wearing face masks, following COVID rules and the little things like race numbers and accreditation makes it all feel real again and like we are at an international competition.” Canoe sprint talent Kailey Harlen, who just missed out of selection last year, was one of the stand-out Paris 24 squad paddlers, finishing second in both the women’s K1 200 as well as in the women’s K1 500 and in between Rio Olympians Alyce Wood (QLD) and Alyssa Bull (QLD).

Alyce Wood (nee Burnett) and Alyssa Bull, will be contesting the women’s K2 500 as their main event and made the most of the race opportunity at the Sydney 2000 Olympic course.

After finishing eighth in K2 final in Rio, the pair is excited to head to Tokyo with the aim to better their result and get on to the podium and the last 12 months have been beneficial for their progress.

“We thoroughly enjoy coming here and race in Sydney, it’s a great facility and it brings the race excitement and nerves back to you.  These last 12 months have been a blessing in disguise for us. We’ve definitely used it really well and we’ve come a long way since 12 months ago.  And we’re pretty excited to put it to the test against the other countries in a few months’ time;” Bull said.

“I think all the memories from last year when we did qualify and then being here that same week but a year later gives you all those good feels and the good energy and it’s good to be able to come out here and practice the Olympic program.  It makes everything more real, particularly after the year that we’ve had.  It does feel like Tokyo is just around the corner now” Alyce Wood said, referring to a year having past between the Olympic selection trials last year and the racing this week.

The team operated in a COVID-safe environment during the simulation camp, including masks and isolation in the team hotel, in order to best simulate the conditions to be expected in Tokyo.

“It’s actually been really beneficial coming here and practicing the full Olympic program with all of the COVID rules, including getting used to putting the mask on, taking it off, being in lockdown in the afternoon is what we’ll do in the village, having limited amount of food choices at breakfast and lunch.  It’s good to be able to practice those little things outside of racing and then obviously having the exact same program to what we will have at the Olympic Games.

“For us it’s having the K2 the first few days and then we would have to reset and race the K1s as well and back up for competition day three and four.  So it’s been really good to go through the motions and tick off things and change things as we go,” Wood described the camp conditions.

Paracanoe
The Tokyo 2020+1 Simulation Camp also included the Paddle Australia Paracanoe selection trials after the paracanoeist confirmed their nomination criteria last year, but never got through to selection following the untimely Games’ postponement.

In the race off for the final spot, AJ Jennings was up against up and coming paracanoe talent and former wheelchair basketball Paralympic medallist Kathleen O’Kelly-Kennedy (WA), who had pipped her on the line on Thursday.  But on Friday, AJ’s experience prevailed, and she was able to secure the nomination with a win.

“I had a really good race and I was happy with it.  The day before, I knew I executed the race pretty badly and lost the connection.  But today (Friday) I did my own race.  That’s what we sometimes forget when we know there’s something big at the end of it, you forget the now.  And today I lived and raced in the now and took each stroke as best as I could,” Jennings said.

And looking ahead to the Tokyo Paralympic Games she added, “It will be a busy and hard five months, but I’m up for it.  The main thing in Tokyo will be the racing and I’m putting my trust in the officials and the people running the event to keep us all safe, which they will do a 110% and to make it an exciting Games.  It will be known as a different Games because of the circumstances but I think we can all look forward to some really good competition, where everybody will have had the same struggles and we all will want to succeed to get on to that podium.”