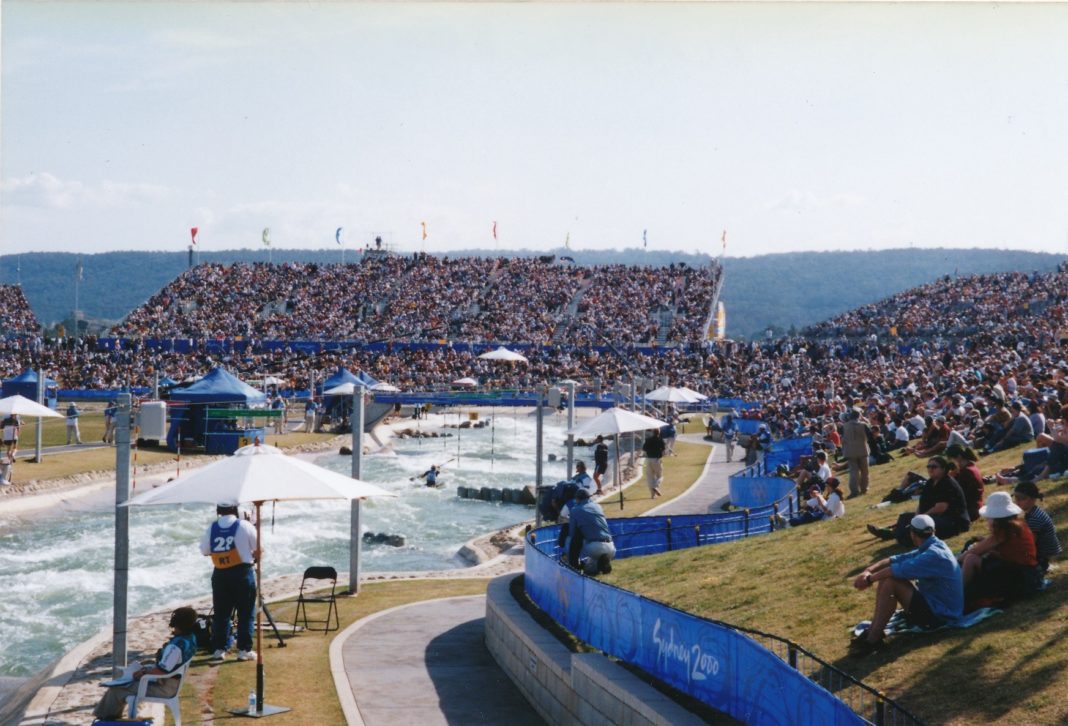 Twenty years since the Sydney 2000 Olympic Games, Paddle Australia Olympians, coaches, administrators and volunteers have been sharing their #MySydney2000 memories about ‘the best Games ever’ and celebrated the 20thanniversary of the Canoe Slalom competition at Sydney 2000 at Penrith Whitewater Stadium last week.

Canoe Slalom kicked-off the paddling events at the Sydney 2000 Olympic Games with Australia’s team of five competing on the purpose-built Penrith Whitewater course from 17 – 20 September 2000.

20-years on, three time Olympian and Atlanta 1996 silver medallist Danielle Woodward still remembers the Games well, especially because they were a home Games, which made them extra special in her Olympic memories, despite not winning a medal. 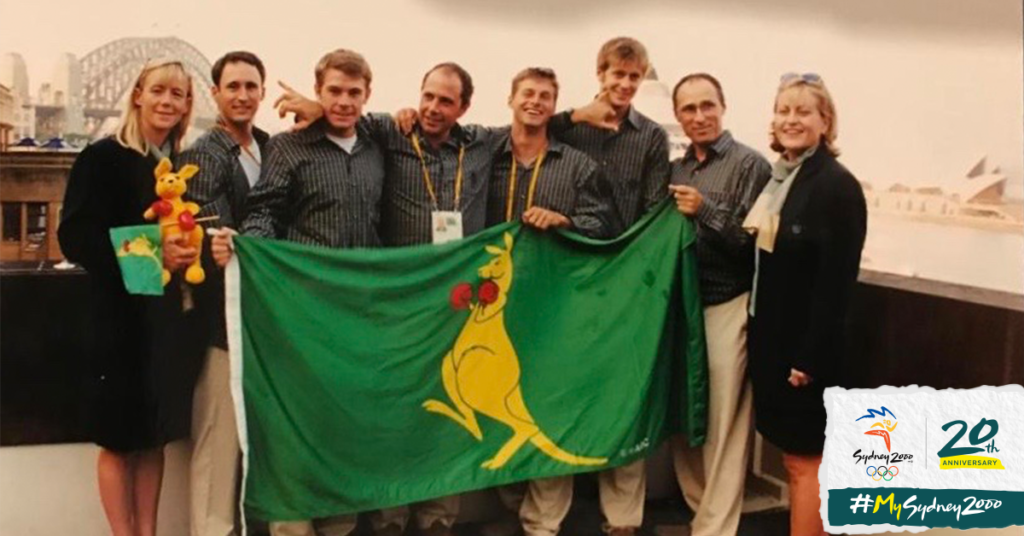 “I remember the Sydney Games so well and have such fond memories because it was a home Games.  It is difficult to describe the feeling of competing on home turf.  I still remember the walk into the opening ceremony and how the roar of the crowd was literally deafening.  I had never experienced anything like it,” Woodward described her feelings at the opening of the Games.

Originally, canoe slalom was not going to be on the Sydney program and securing canoe slalom for the Olympic Games 2000 took an international effort.  So, seeing the Australian and international fans getting behind their athletes and bringing the Penrith Whitewater Stadium to life with a sold-out crowd made for a canoe slalom competition never to be forgotten and added to everyone’s “best Games ever” experience.

“I was so proud of Australia when I heard that the slalom venue was sold out every day of the competition.  This was for a sport that was not well known as an Aussie sport.  People just wanted to be part of the Games.  The stadium and the crowd and how engaged and excited everyone was.  It was definitely one of the highlights of the entire Games.  It was such a warm experience with the whole of Australia cheering for Aussies” Woodward said.

“Sitting on the start line was nerve racking, being in front of a home crowd but the volume of noise they made every time an Aussie came down the course was deafening.  That noise was terrifying and exhilarating at the same time, it lifted you to give your all.  I didn’t paddle my best on the day but even so when I went around to see the crowd, they were so proud and welcoming.  It is really hard to describe,” Woodward said about her Games experience, after finishing eighth in the final.

The home crowd is also what Games debutant Robin Bell remembers the most.

“The home crowd was amazing.  I remember warming up hearing this massive noise erupt. Talking with another competitor I asked ‘what was that about’ and he said that the commentators just read out my name off the start list.  I never experienced anything like it,” Bell said. 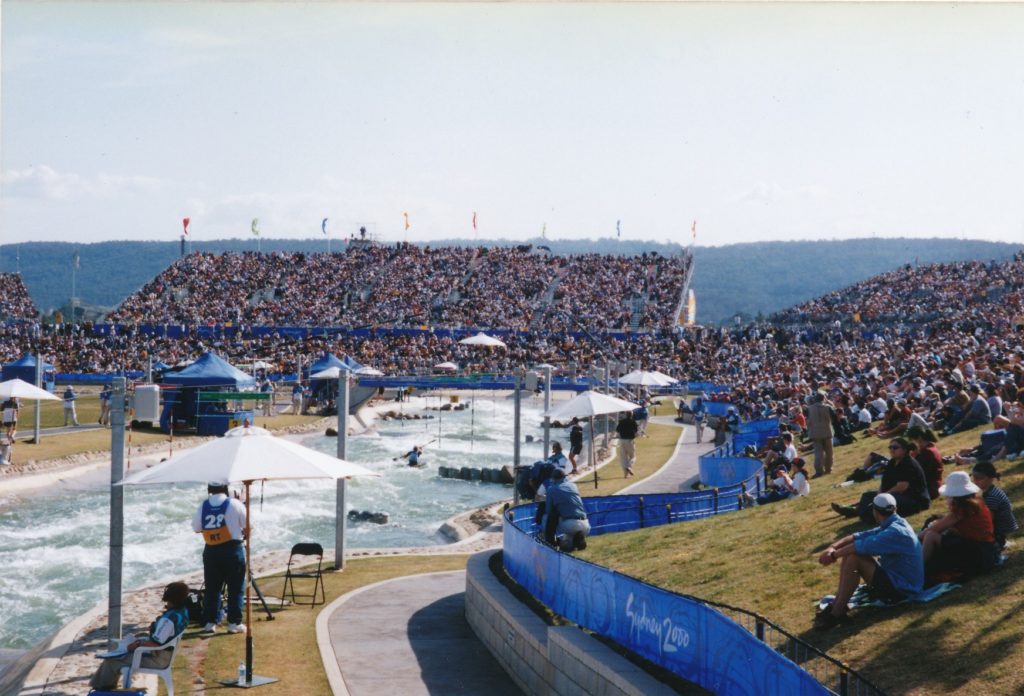 “The biggest crowd we had was about 15 people before that and we had, I can’t remember if it was 12,000 or 14,000, whatever it was, and it was a massive thing for me.  Such a small packed stadium filled of Aussies and the atmosphere was intense.  It was such good positive energy coming from the crowd – all over Sydney.  There was an amazing amount of positive energy and everyone was just having a good time,” Bell added.

The paddling did not go as planned for Bell at the time, but it was Sydney 2000 that kick-started his Olympic paddling career.

“The paddling was not too memorable unfortunately.  It was kind of bittersweet because I didn’t perform to what I should’ve done, I suppose.  I performed at the start, but I just couldn’t finish it off which was really unfortunate.  I wanted to bring home a medal for Australia but we missed out by a bit in the end, so it was bittersweet,” Bell said about the racing that saw him finishing ninth.

Nevertheless, Sydney was the start of a paddling career for Bell that spanned three Olympic Games, including a bronze medal in Beijing in 2008 and a world champion title in 2005.

“It certainly did kick it (Olympic career) off.  I had something to prove on the Olympic stage.  I did feel like I belonged mixing it up with the best paddlers.  The Sydney Games certainly gave me a taste of the Olympics and I knew I wanted to perform in that arena and it did set me up for Athens.  Then coming fourth in Athens upset me enough it drove me onto Beijing.”

Experiencing Olympic Games for the first time was an inspiration, which went beyond paddling and changed his life.

“My best memory was getting involved with the broader Aussie team and meeting my wife in the village of course,” Bell said, who met his now wife Julia Wilson at the Games, who was competing in the rowing events in the women’s quadruple sculls.

Meeting other athletes was one of the key parts of Bell’s Olympic experience.

“What inspired me actually was meeting the other Olympians as well.  Canoe slalom’s obviously a pretty small sport, it’s grown in Australia, but it was actually meeting the rest of the Australian Olympic Team.

“I started doing a bit of training with different sports as well which got me more engaged with the whole Olympic process and leading up to Athens.  When you’re younger you need a lot of on the water technical skills and as you get older you need to get that core fitness going and you can do that by doing several different sports.  I really enjoyed joining in with the Sydney Uni rugby players and the water polo team.  I used to do a lot of boxing with Paul Miller, who was on the Sydney 2000 boxing team.  So, I found it really motivating through all the different other sports.  It was such a fantastic team and everyone felt welcomed, so it was good fun,” Bell described.

While Sydney 2000 were the first Olympic Games for Bell, it was the final Games for Woodward, who was 35 years old at the time and was juggling her work at the Australian Federal Police with her training.

“I had considered retiring after the 1996 games but decided to give it one more go when Slalom was confirmed in the Sydney Games.  I was already 35 so trying to work and compete was hard.  I would spend a fortnight in Penrith training and a fortnight at home in Melbourne working.  Whilst I wasn’t sure when I would retire exactly, I knew it would be my last Games.  It is a pretty good way to end an Olympic Career,” Woodward said. 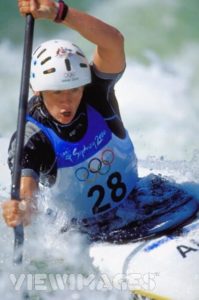 Woodward also had some unforgettable memories from the Games overall.  “There were so many memorable moments at the Games it is hard to narrow it down.  The girls water polo win, Cathy’s 400, the atmosphere in the village.  My favourite part was when you were outside the village and just walking around everyone was so friendly.  There was just a wonderful vibe in the city throughout the Games.”

Woodward, OAM who continues being involved in sport on various levels and has attended two more Summer as well as two Winter Games as part of the Australian Olympic Support Team and amongst others as Deputy Chef de Mission on the Rio 2016 Team, also has some advice for Australia’s up and coming paddlers with another home Games hopefully on the horizon for 2032.

“It is a lot of hard work and dedication but if you love what you do and want to go to a Games it is worth every hour that you spend training.  It is important to have fun paddling.  A home Games is extra special and having had the privilege to go to Games in Europe, America and Australia, Australia was without a doubt the most fantastic Games in the way they were run, especially with our volunteers.  There is nothing quite like competing at home,” Woodward concluded.

A sentiment shared by Olympian Richard Fox, who came to Sydney two years before the Games to lead the Australian team as Head Coach and also remembers the Sydney spirit.

“I think in our case, everyone felt lucky to be there because of how our sport nearly missed out on being there at all.  Add to that the amazing atmosphere and the memories come flooding back.  The Games brought together so many people from every walk of life and in every role imaginable.  I asked my neighbour, “where were you in Sydney 2000?”  He said, “I was building the village, mate!”

And about his most memorable moment he added, “One standout for me was when the announcers called out the athletes’ names.  The roar that went up for each Australian was something that I had never imagined.  From a sporting perspective it created a massive platform for our future success.  Can we do it again….?”

With Australia discussing a bid for the 2032 Games, the question is excitingly real with his daughter, dual Olympian Jessica Fox hopeful. 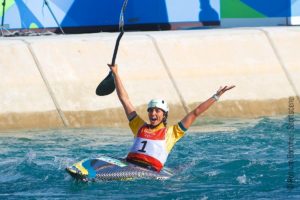 “I really hope we can host an Olympic Games in 2032! It would be incredible,” Fox said, who was only six years old at the time of the Sydney Games, but was inspired by the Games to follow her Olympic dream.  Since then, Fox has become the greatest slalom paddler of all times, has won two Olympic medals, ten world championship titles and is set for her third Olympic Games come Tokyo 2020+1.

“I was six when the Olympics were on in 2000 and I remember seeing some phenomenal athletes racing and on the top of that podium.  They came back year after year and I even got to race with some of them Stepanka Hilgertova (CZE, Sydney 2000 gold medallist women’s K1) and Tony Estanguet (FRA, Sydney 2000 gold medallist men’s C1) 12 years later in London. The Sydney 2000 Games have inspired my dreams and Penrith became my home. I hope I can inspire many more generations of paddlers to come as well,” Fox said.

And about her memories she added, “I don’t remember everything and we seem to have misplaced our photo album, but I do remember the slalom events and how huge the crowd was.  I remember random things like having ice cream at the swimming, being big fans of Ian Thorpe and Susie O’Neill (I had a Susie barbie doll that would swim in the bath!), and I also remember staying up late and watching the opening ceremony and being obsessed with Nicki Webster!  Of course, we also watched a lot of the events on TV and some of those moments stayed with us to this day, including Cathy Freeman’s gold medal.”

“I wish I was a bit older in 2000 to understand and appreciate just how special it was to have a home Olympics, but I think Sydney’s legacy had a significant impact on me.  Obviously having the whitewater stadium in Penrith and being able to train there once I was old enough has been a great and is one of the reasons, I’ve been able to achieve what I have.  I also remember going to Sydney Olympic park and seeing the names of some of Australia’s greats throughout school sports carnivals and excursions and every time I’m in Sydney Olympic Park I imagine just how amazing those two weeks 20 years ago would have been!”

For more about the sport of canoe slalom and our Olympians head HERE:

The Sydney 2000 celebrations continue for another week with more memories from the canoe sprint competition.  You can share you memories by tagging @auspaddleteam and using the hashtag #MySydney2000 or sending us your pictures and memories to media@paddle.org.au.