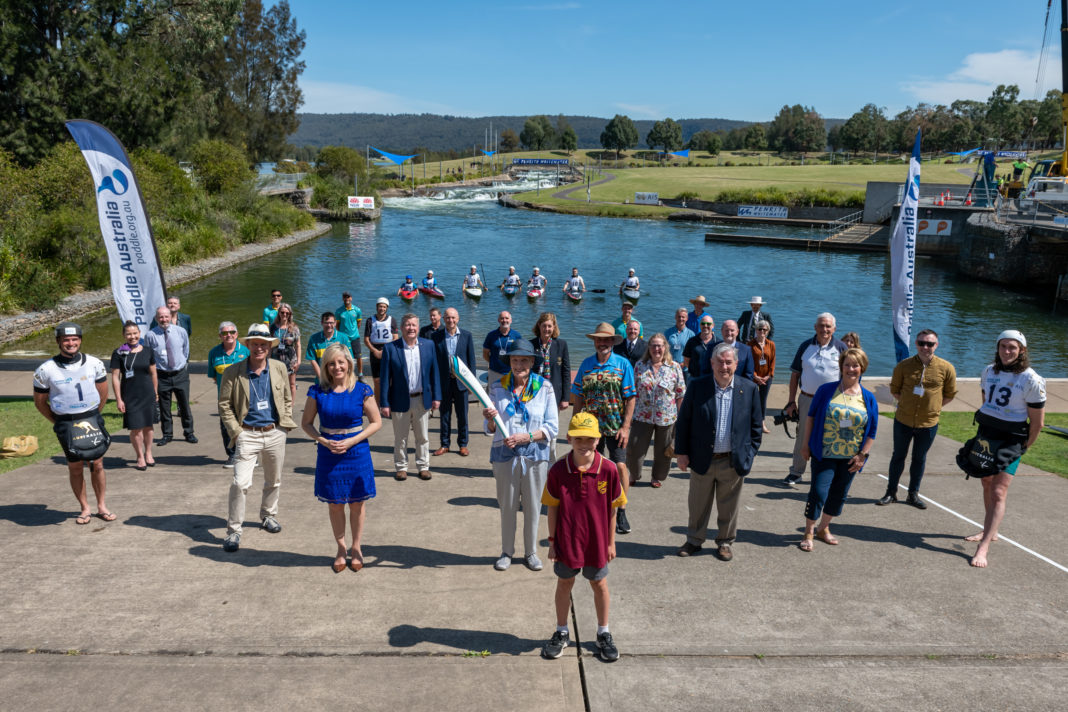 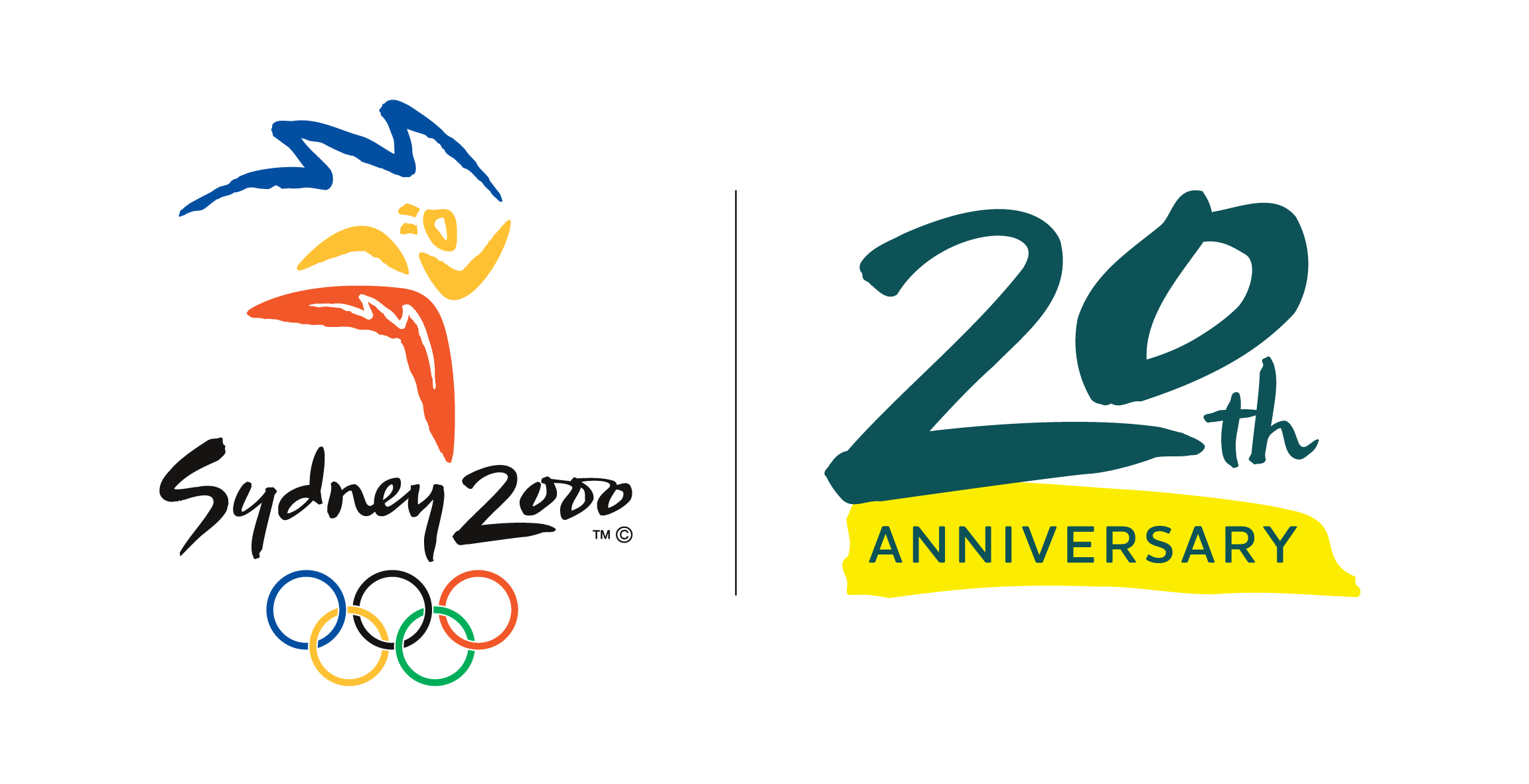 20 years on from the Sydney 2000 Olympic Games canoe slalom competition, current and past Olympians came together at Penrith Whitewater Stadium today to celebrate 20 years of Olympic legacy.

“It’s great catching up with everyone.  Some of the guys on the team, I haven’t seen literally for about 19 years.  At that point we had common ground and then they were a bit older than me so they kind of left and had kids and work, so it’s really good catching up with everyone and reminiscence about the times we had in 2000,” Bell said, enjoying the celebrations.

“There’s a lot of stories that happened in 2000, some of them you can share, some of them you can’t but there’s a lot of good, fun times.  The best thing about it was that Sydney was so good, there was such a big energy in Sydney at the time.  Everyone was getting into it, everyone was having a good time, so it was such a good thing,” Bell described his Sydney 2000 memories. 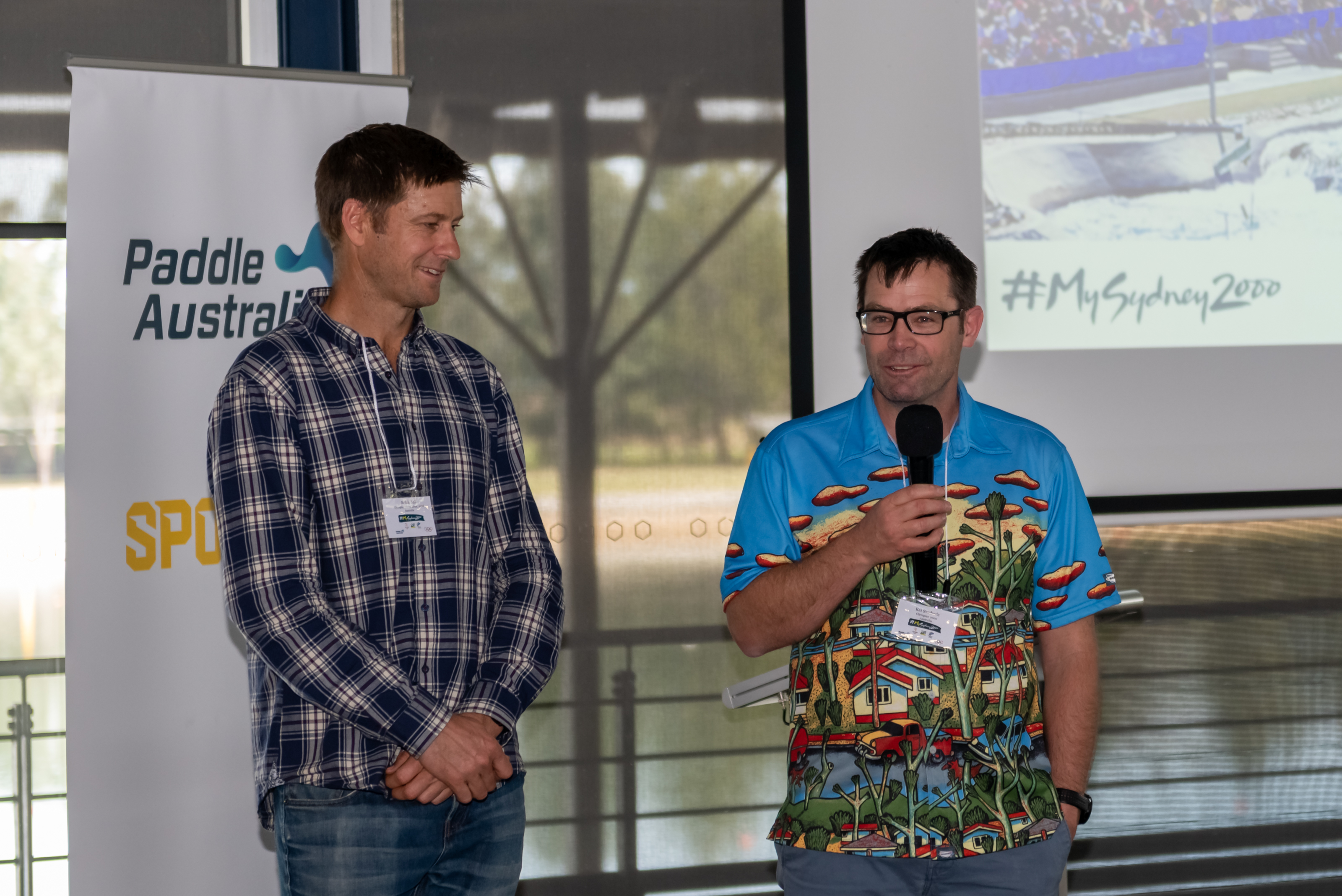 “What inspired me actually was meeting the other Olympians as well.  Canoe slalom’s obviously a pretty small sport, it’s grown in Australia, but it was actually meeting the rest of the Australian Olympic Team.  I started doing a bit of training with different sports as well which got me more engaged with the whole Olympic process and leading up to Athens.”

Since Sydney 2000 Penrith Whitewater Stadium has continued to host the world’s best paddlers and has been pivotal to the success of Australia’s top canoe slalom athletes, including 2008 Olympic silver medallist Jacquie Lawrence, 2008 Olympic bronze medallist and world champion Robin Bell, as well as Jessica Fox, who was inspired by Sydney 2000 at the age of six to follow her Olympic dream.  Since then, Fox has won two Olympic medals, ten world championship titles and is set for her third Olympic Games come Tokyo 2020+1.

“Penrith Whitewater Stadium has been an integral part of my career.  I was able to build my whitewater skills and technique on a world class venue, be exposed to some of the world’s best athletes who have been coming to Penrith since 2000 for the Aussie summer and we’ve been able to host international events,” dual Olympic medallist Jessica Fox said from her current training location in Pau, France about the significance of Penrith Whitewater Stadium for her Olympic career. 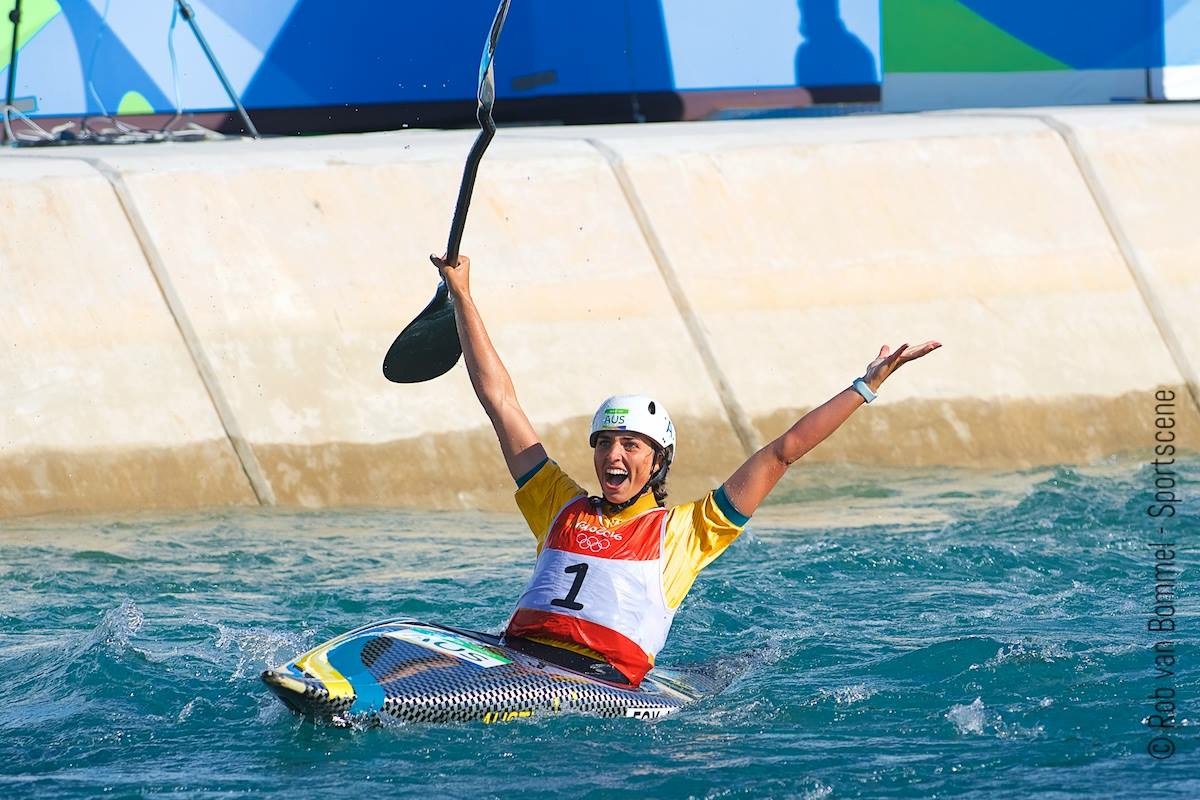 “I wish I was a bit older in 2000 to understand and appreciate just how special it was to have a home Olympics.  I think I was more inspired by the Athens Olympics, being 10 and sporty and already dreaming of the Olympics… but I think Sydney’s legacy had a significant impact on me.  Obviously having the whitewater stadium in Penrith and being able to train there once I was old enough has been great and is one of the reasons, I’ve been able to achieve what I have,” Fox added.

Fellow Rio Olympian and Tokyo 2020 team mate Lucien Delfour joined the celebrations in Penrith and agreed about the impact Penrith Whitewater Stadium has had on his career as well.

“I came out here (to Australia) in 2007 and that was my first time on an actual artificial course that’s Olympic size and I thought it was amazing.  It’s such a different thing from a natural river, it’s messy and perfect at the same time and it’s so much fun.  For me, it’s great to train here every day, it’s one of the best courses in the world,” Delfour said. 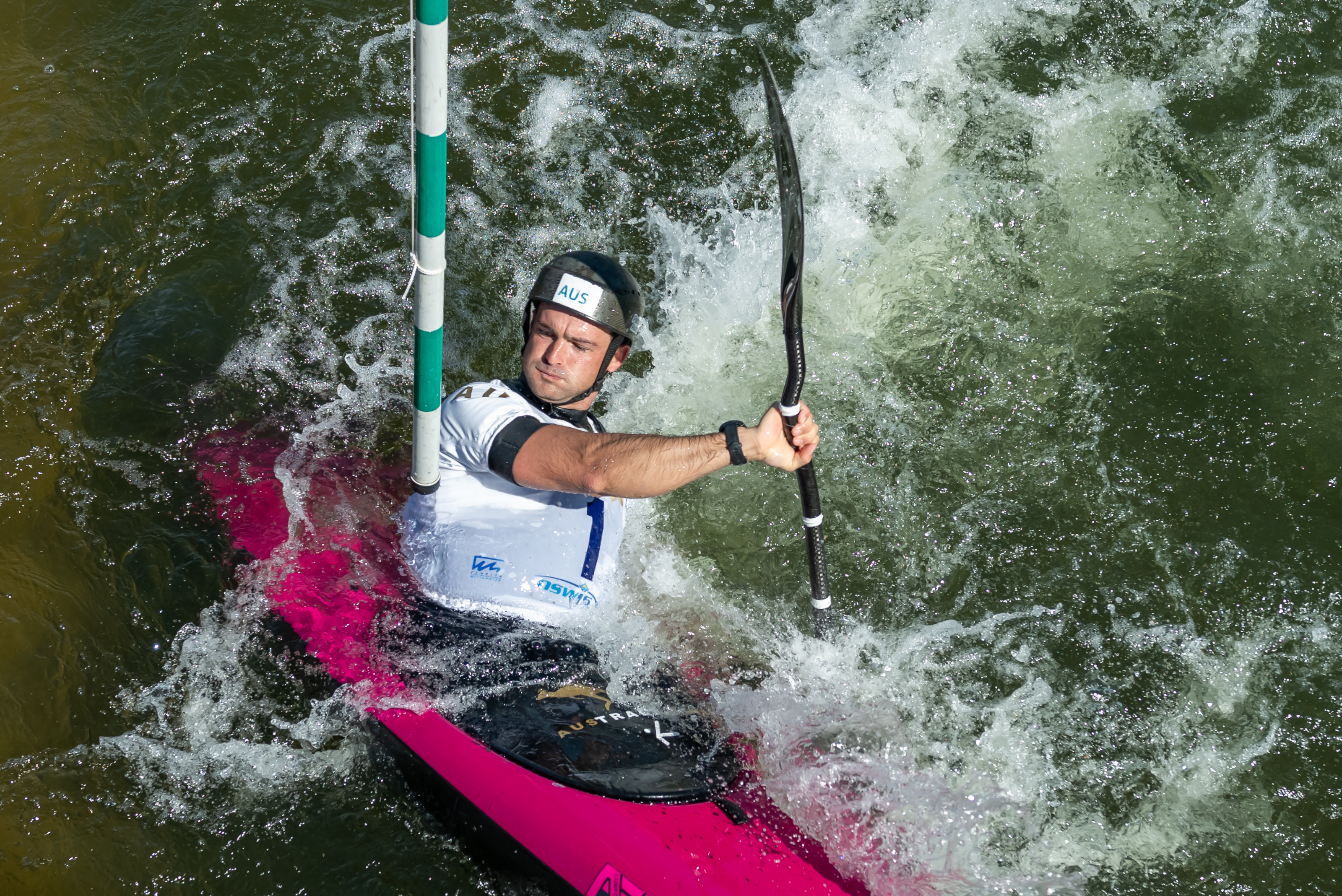 “I was at school back in France, so I remember some of it but as a kid…I remember the French paddlers smashing the Games with Tony Estanguet winning the Games in the men’s C1, which was such a big event in France.  Back then I always thought it was such a dream but not necessarily reality.  I thought it was amazing but I always thought those guys were in such a different league,” Delfour reflected on his Sydney 2000 memories, which inspired his own Olympic career. 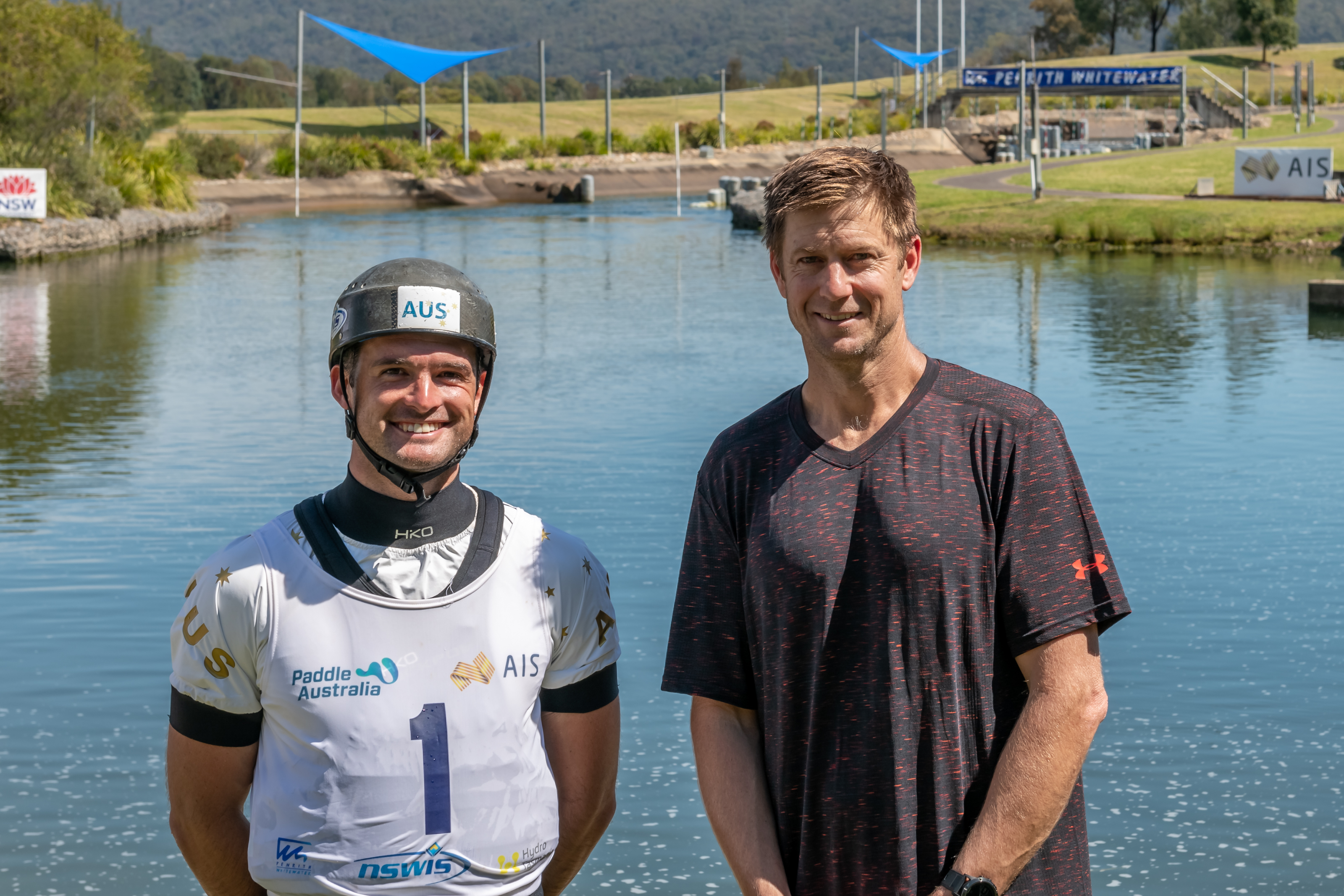 Sydney 2000 was also the inspiration for Blue Mountains local paddler and Rio Olympian Ian Borrows, who has fun memories of the Olympics.

“I live in the Blue Mountains and I was lucky enough to have my father and mother bring us down here to watch the canoe slalom and the racing here.  It was one of my favourite events that I did get to watch and I was lucky enough to watch a couple of the Olympic events.  With this course being built, it was a stepping stone into starting paddling, taking advantage of this venue which was here and I managed to paddle for the past 20 years here and overseas, and it’s been really fun.” 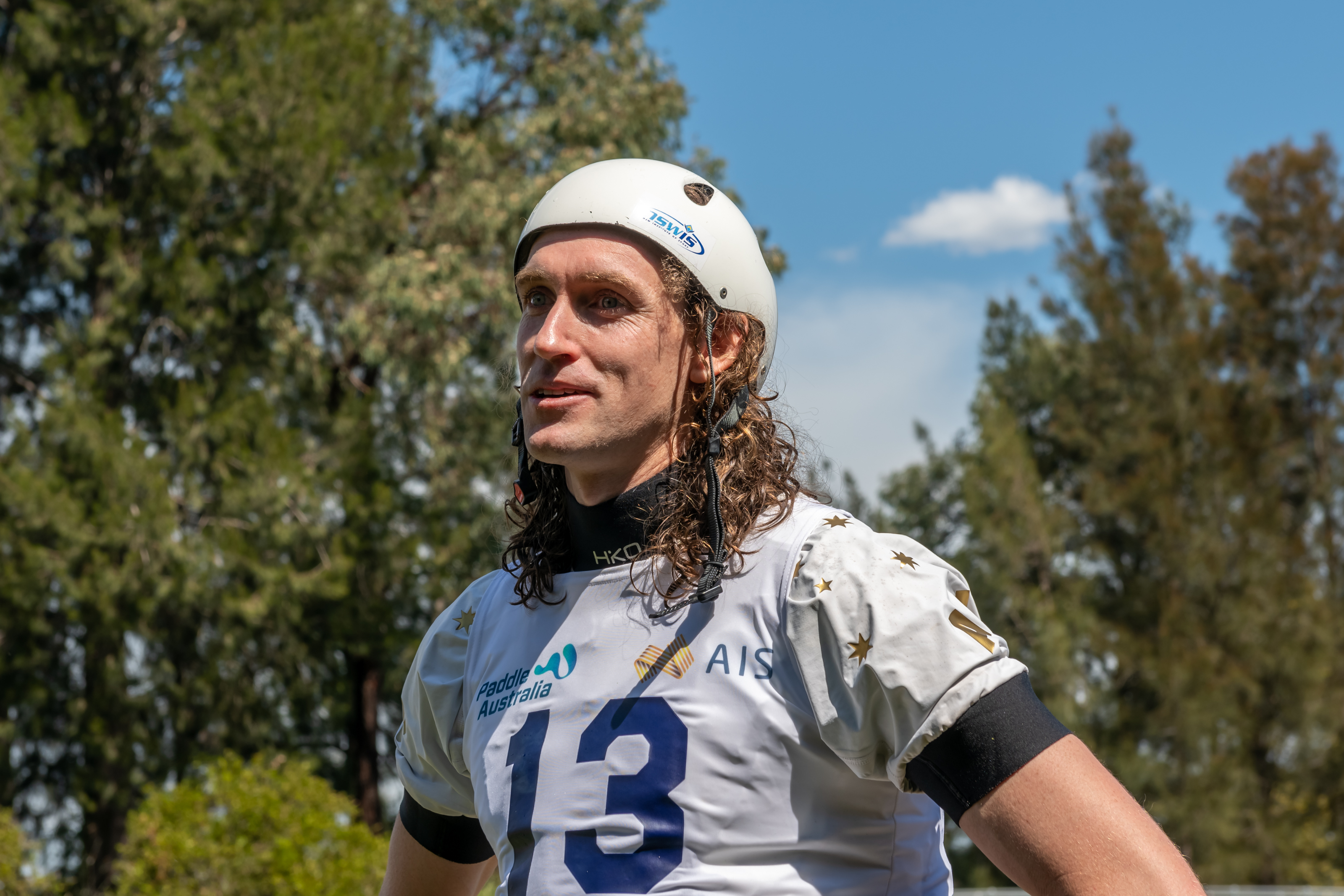 Australian Olympic Committee CEO Matt Carroll acknowledged the legacy of Penrith Whitewater Stadium, which 20 years on is still pivotal to the success of Australian canoe slalom.

“20 years on, it’s one of the great legacy venues from the 2000 Games.  Not only is it a legacy venue but it’s also a way for the athletes to keep training for the Games that have rolled on since then and Australia’s done very well in the sport of paddle.  So, having this centre built at the time was obviously a lot of foresight and it’s lasted for years,” Matt Carroll said.

“Having this venue here is so important for the athletes’ preparations for the Games.  If we didn’t have it here in Australia, it would make it a whole lot different.  A lot of athletes around the world are jealous of Australia because we are able to keep preparing, so that’s a big plus.  Looking down the track, before we know it, it will be Paris and then LA and who knows, we might have a Games in South East Queensland in 2032, so a great 10-year runway,” Matt Carroll added looking ahead. 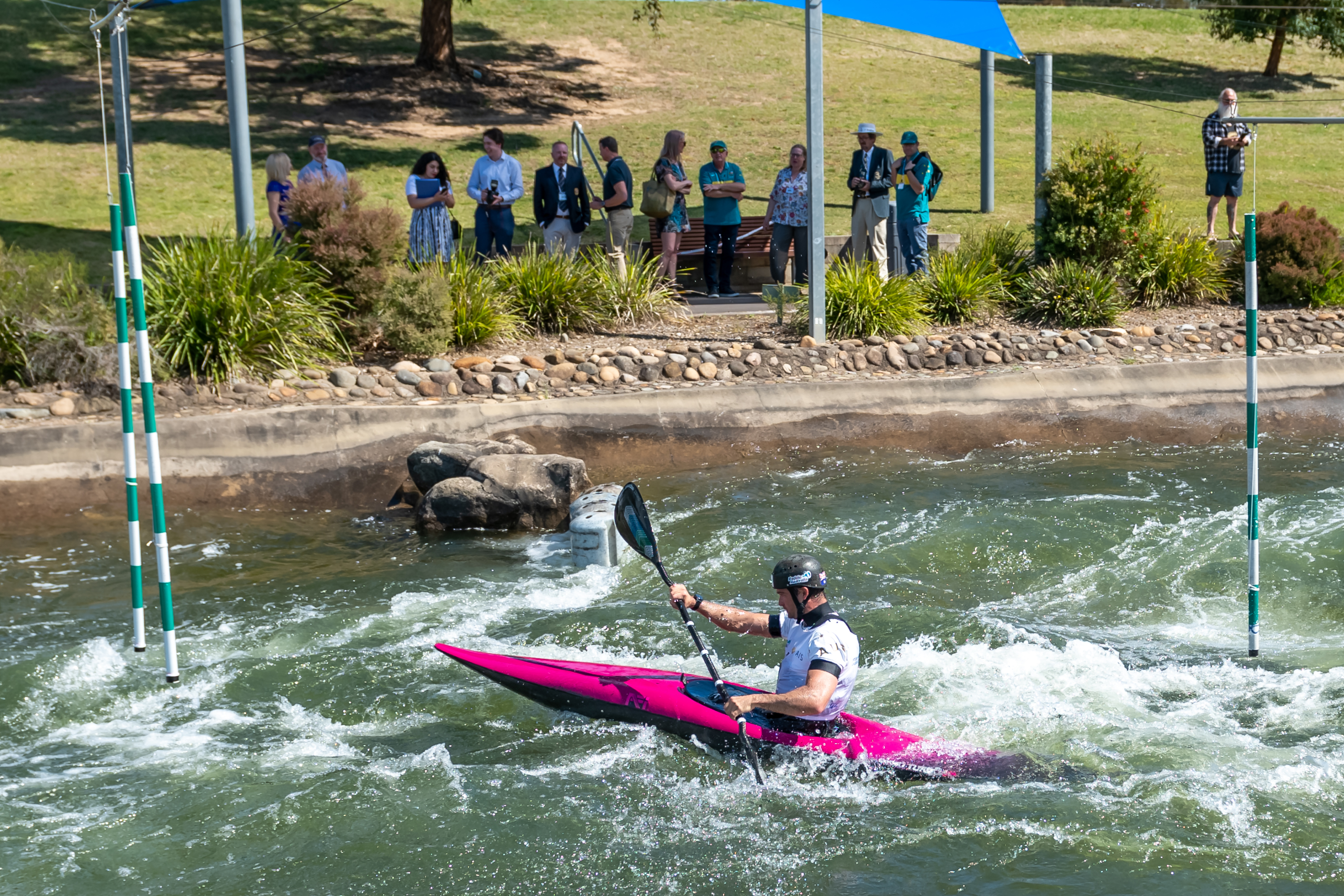 Celebrating the 20th anniversary of the origins of this iconic Sydney 2000 legacy venue, also marks the starting point of an exciting future for the Olympic sport of canoe slalom and the local community of Penrith with an Australian Government grant towards a permanent high-performance facility at the venue securing a bright future for Olympic paddling in Australia. 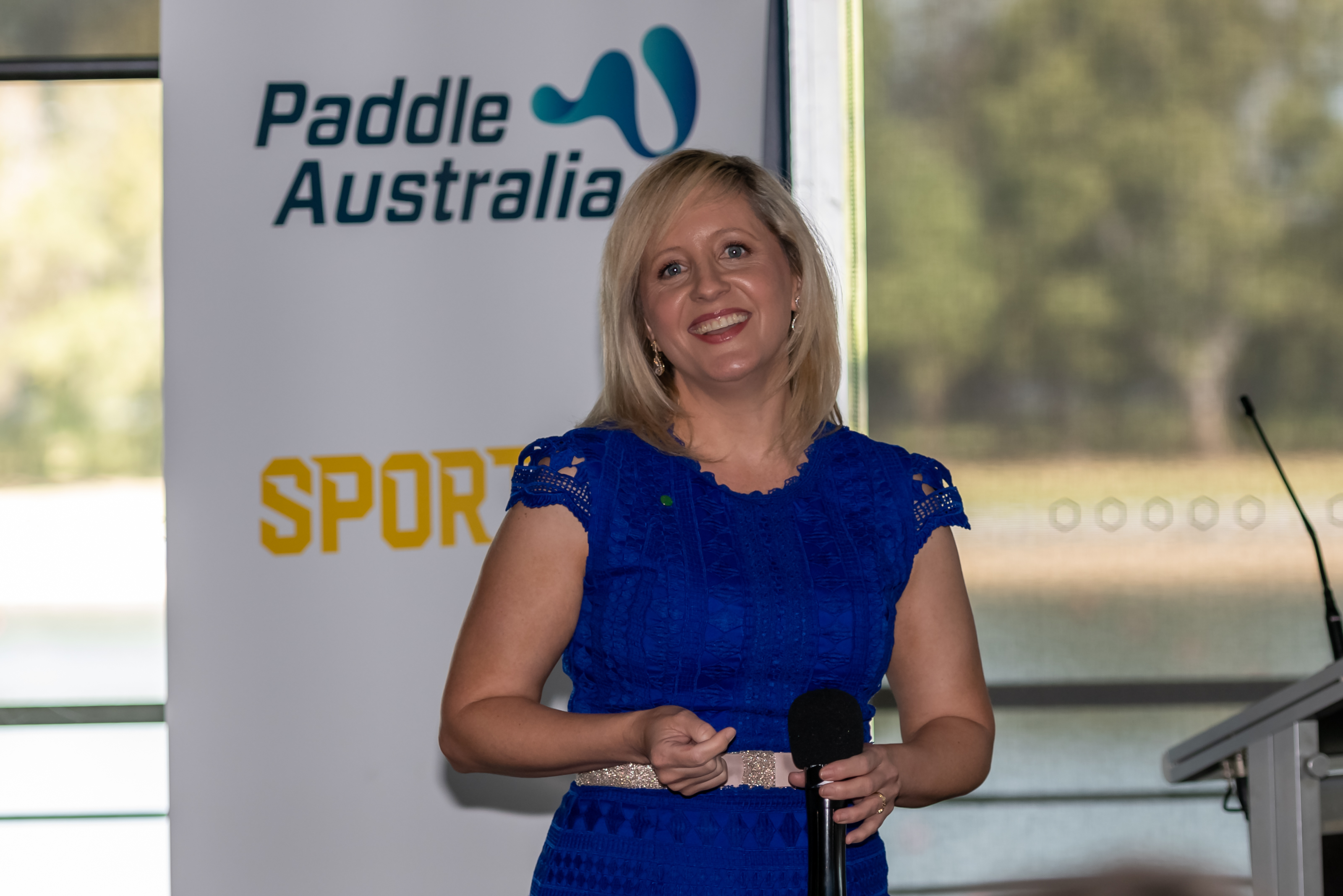 “$2.3 million, I’m so pleased.  That was one of my election commitments going into ensuring that the athletes of the future are going to have the best facilities that we can offer.  I think that’s really important in making sure that our team gets the best opportunities and also the young people coming through.  I’m really excited about the future, the next 20 years really, of the stadium,” Federal Member for Lindsay, Melissa McIntosh MP welcomed the release of the first trance of the $2.3 million Commonwealth investment in the Penrith Whitewater Stadium, which will build Penrith’s whitewater future.

“It’s fantastic to be here and to see that the Olympic legacy, the whitewater stadium, is still going strong.  We have new athletes coming up through the ranks and to have it so vibrant, it’s really a testament to all the work that went on 20 years ago to get this place up and running,” Ms McIntosh recognised the efforts of Australia and its partners to bring canoe slalom back to the Olympic Games for Sydney 2000 and to get the built of the Penrith Whitewater Stadium off the ground.

Ms McIntosh also has a personal connection to the Sydney 2000 Games, the Games she met her husband Stuart.

“It was such an exciting time, well obviously I met Stuart (husband) here, he was competing for Great Britain for canoe slalom, so I was here cheering him on and also the Australian team.  I was working for the member for Lindsay, Jackie Kelly, and she was the Minister for the Olympics at the time, so I had a lot to do with the whitewater stadium.  It was just that feeling of everyone coming together, it was just such an exciting time for our community.” 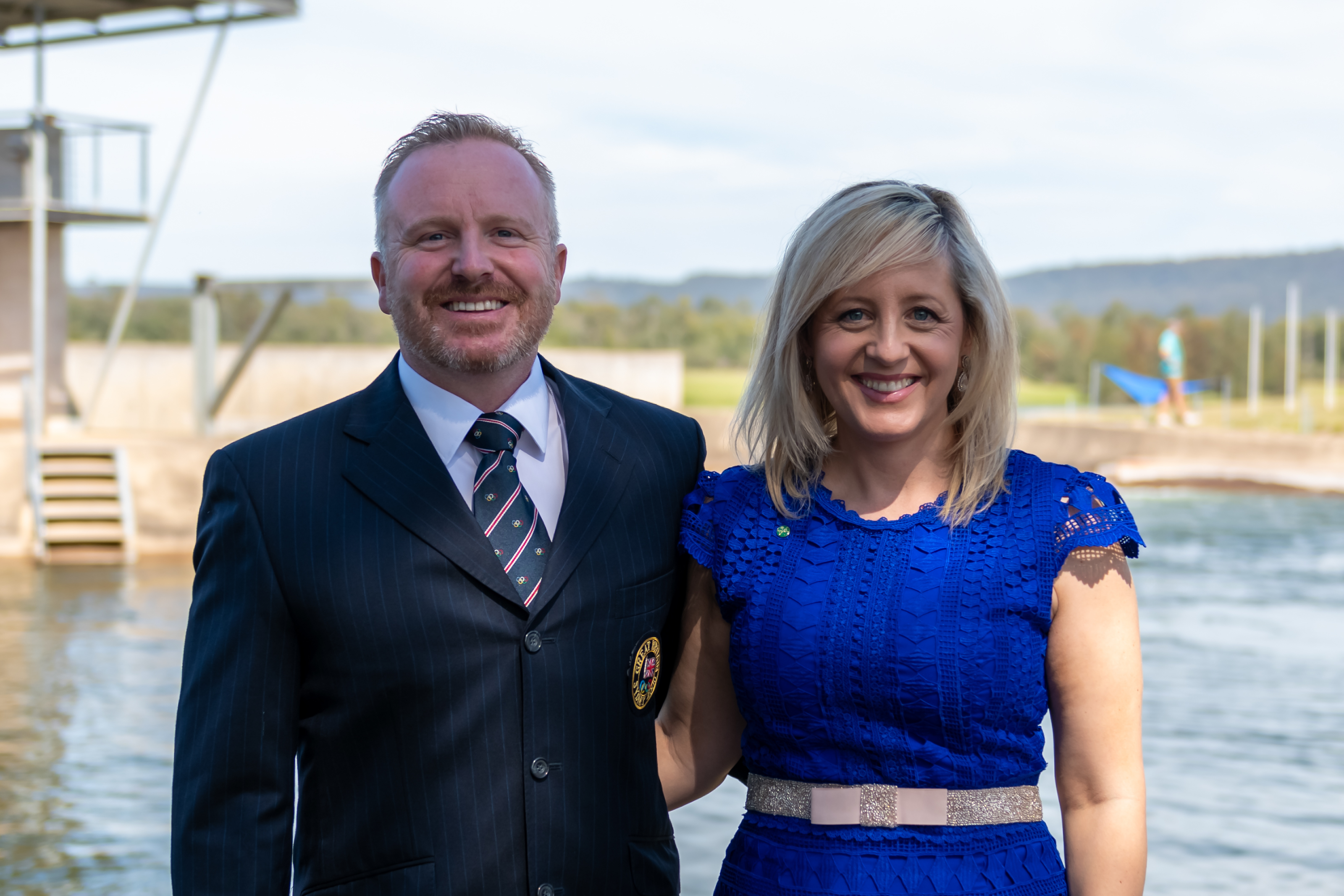 Member for Penrith Stuart Ayres could not be at the anniversary event, but sent a video message from Parliament.

“This is a fantastic opportunity to celebrate our wonderful Whitewater Stadium as well as our Sydney International Regatta Centre (SIRC) which 20 years on still continue to provide the people of Penrith such joy and such fantastic facilities for the elite athletes who come and train at those venues.”

“A big thank you from the bottom of my heart.  It’s been an amazing 20 years and I remember being out at the site during the Olympics watching our fantastic athletes perform on the world stage and putting Penrith on the world stage as well.  And there is a strong and bright future ahead for the Whitewater Stadium as well as for SIRC and they are a strong part of what we as a State Government operating in Penrith with plenty of opportunities for athletes, visitors and local citizens alike.

“It’s exciting to imagine the improvements to our whitewater venue that will support the future of our sport with a smaller channel that will be so helpful for developing athletes and our elites, as well as more activities for the general public.  It would be great to see the Whitewater Stadium evolve into a public space that connects the lakes, to the city, and the river.” 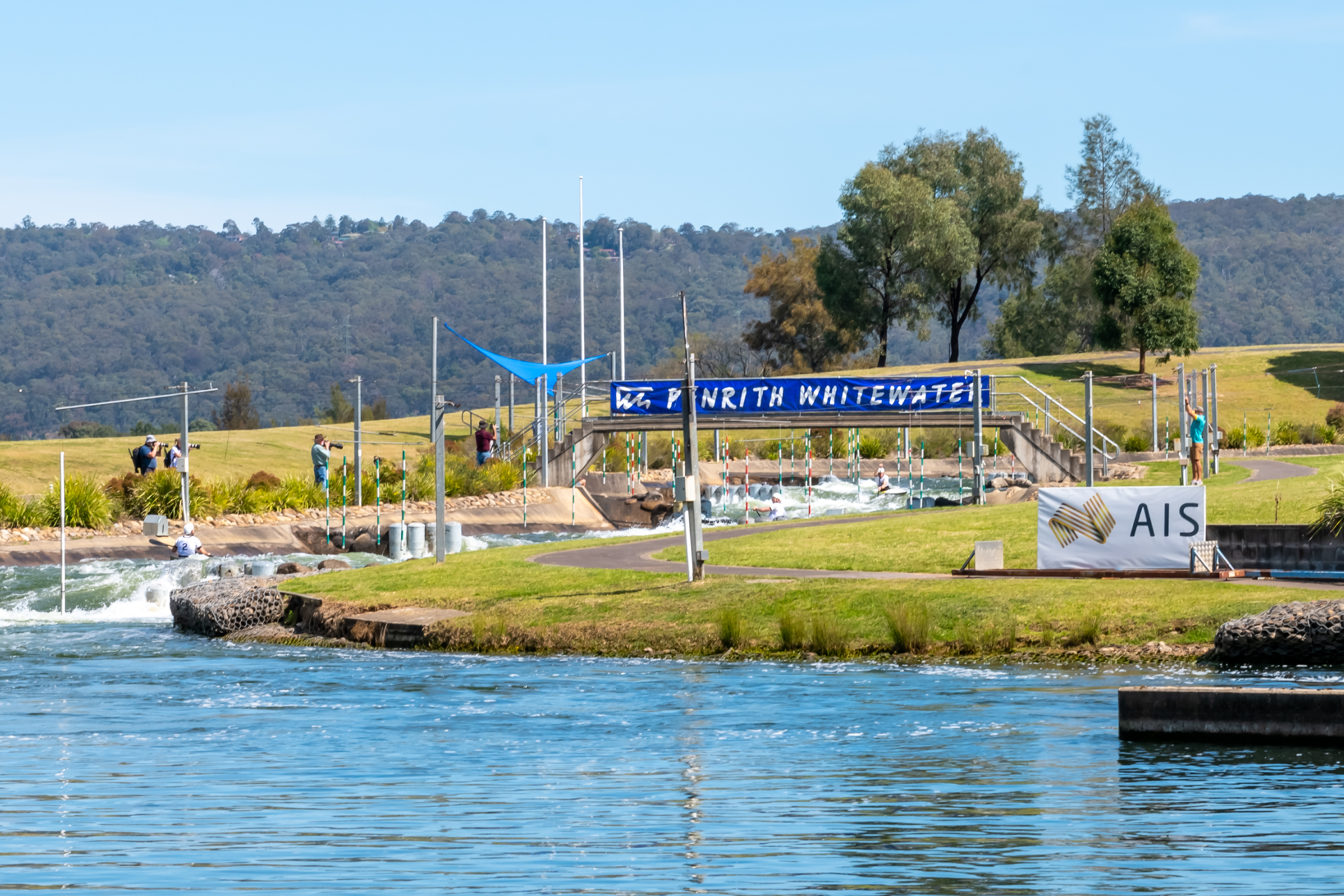 The future plans for the venue were presented at a celebratory luncheon at the Regatta Restaurant and will continue to be unveiled over the next couple of months.

Follow #MySydney2000 as well as the @auspaddleteam for more on paddling at the Sydney 2000 Olympic Games.