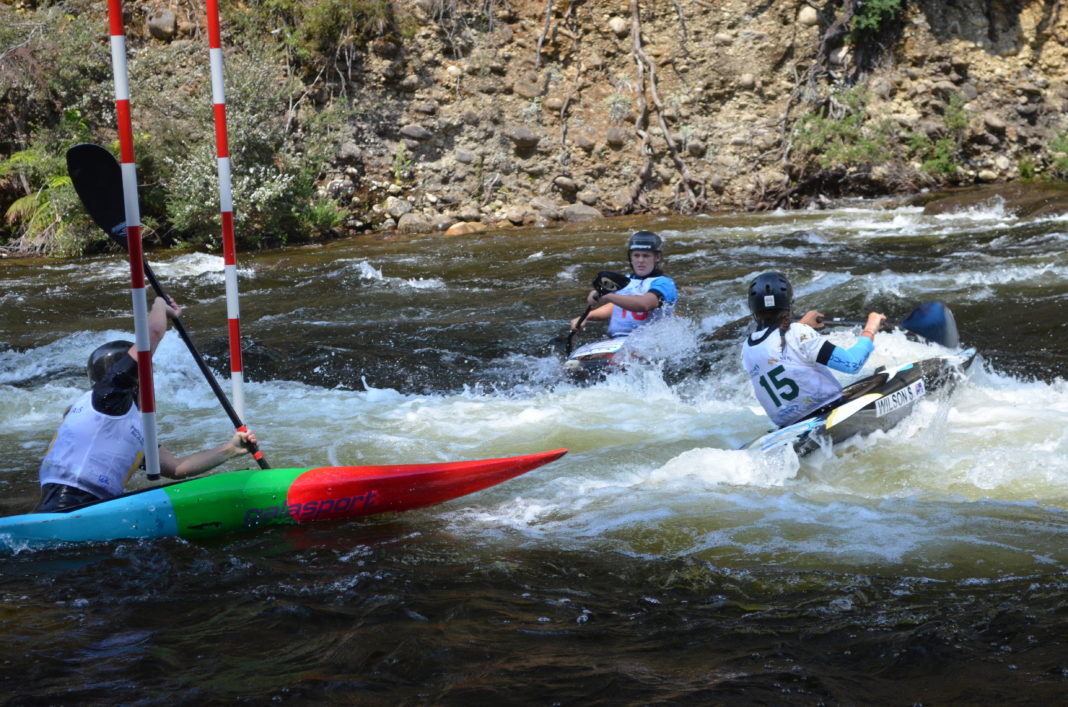 The 2020 National Canoe Slalom Age Champs wrapped up on the Upper Mersey River in Tasmania today (Sunday, 5 January) with the National Club and Schools competition and with last year’s winner Ivanhoe Grammar once again taking out the National School’s trophy.

The final day of Paddle Australia’s 2020 National Canoe Slalom Age Champs saw some very strong performances with much of the competition dominated by interstate visitors for the National Club and School’s competition.

Victorian U16 paddler, Mark Crosbee continued his blistering form taking out the fastest time in the Men’s C1 class against all age groups with his nearest rival, Daniel Shamieh from the U23 age group coming in six seconds behind him with Benjamin Ross, from the U18 class, taking out third place just second later.

The Women’s C1 was again dominated by NSW U18 paddler, Sophie Wilson in a time of 109.78 second, a clear winner with second place going to Victorian U18 canoeist, Georgie O’Callaghan with third place getter, Miranda Pulkkinen coming in at 134.53 seconds.

The Women’s K1 race was a repeat of the C1 results with the top three led by Sophie Wilson in a time of 100.14 seconds, just pipping out close rival, Georgie O’Callaghan at 1010.14 seconds and Miranda Pulkkinen’s third place in a time of 103.12 seconds.

The school and club events wrapped up a successful event, that started with the team events on Friday and saw the individual races day on Saturday.

In the final of the Men’s Under 18 kayaking event on Saturday afternoon (MK1), line honours went to local paddler, George Lazenby with a time of 99.38 second, just clear of Benjamin Ross of Victoria and Declan Ellis of NSW. These three paddlers also formed the top place getters in the Men’s U18 C1 series with Lazenby coming third behind Ben Ros and Declan Ellis.

The Men’s K1 U16 saw Mark Crosbee of NSW, narrowly ahead of local paddler Hamish Dalziel with Ben Little of Victoria in third place.

Mark Crosbee had a great day also taking out the Men’s C1 U16 race, with Hamish Dalziel again taking second place, this time joined by another Tasmanian paddler, Hugh Clements.

In the Women’s K1 events, Sophie Wilson of NSW had a great day taking out top spot in the U18 series, repeating this success again in the afternoon’s Women’s C1 U18 race. Local paddler Claire Hodgman came fourth in the K1 and fifth in the C1.

Already on Friday, the team events kicked off the first of the official races on the Upper Mersey River in Tasmania.

In the team events, first place medal honours in the Men’s K1 went to the team of McLaughlin, Little and Crunkhorn finishing 13 seconds ahead of Tasmanian team Matt Dalziel, David and John Borojevic with Galea, Stamp and Crosby making up the third spot.

In the Women’s K1 Teams event, line honours went to Wilson, Libreri and Latter followed by Berryman, Crosbee and O’Callaghan in third position.   Ellis, Ellis and Mujcinovic took out honours in the Men’s C1.

See all results below or here: https://slalomage.paddle.org.au/#live-results

For more information about Paddle Australia and the 2020 National Age Slalom Champs, please go to our website at: https://slalomage.paddle.org.au/

Paddle Tasmania and Paddle Australia would like to thank all the event sponsors without which these races could not have taken place: Hydro Tasmania; the Tasmanian State Government through Events Tasmania and Communities, Sport and Recreation, Tasmania Parks and Wildlife Services; and, the Tasmanian Institute of Sport.

The 2020 event was organised in partnership with Paddle Australia (PA).