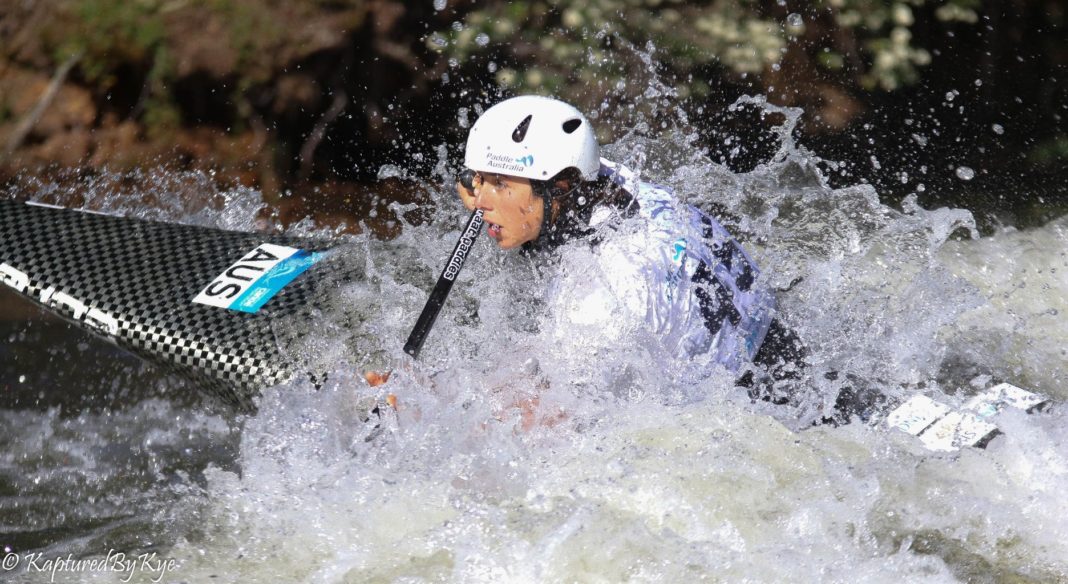 Noemie Fox led the charge on an outstanding day of competition at the 2019 ICF junior and U23 canoe slalom world championships in Krakow, with all but one of the team progressing to the U23 semi-finals.

“It’s a nice change, I haven’t done just the first runs of qualifying in a long time,” Fox said.
“And tomorrow is a day off, so I’m going to get a lot of rest, which is nice. It’s good to get through on the first run, but also to get through with a solid run is quite good.

“I know Krakow pretty well. It’s changed quite a bit, I find it slower and a lot more physical, but it’s nice to on an artificial course. I’m feeling good.”

Kate Eckhardt is also through to both the K1 and C1 semi-finals, after finishing 15thin the K1 and then second fastest on her second run in the C1.

“I was very annoyed with my paddling on the first run of the C1, but got it back together on the second,” Eckhardt said.

“It wasn’t anything amazing, but enough to go through. My third run of the day, so I was definitely pretty tired and trying to hype myself up before the run.”

Joining Fox and Eckhardt in the C1 semi-final will be Demelza Wall, seventh fastest on her second run.

“It was a bit nail-biting, but a big relief to get through,” she said.

“I think that I have got more to put out on the course. It was hard for me to bounce back on the second run, because I really struggle with nerves. But I had a lot of confidence in some of the paddling I had done, and knew I just had to do that on the whole of the course.”

“It still wasn’t the perfect run, but on that kind of course its pretty hard to get a perfect run. I’m so happy because it’s been a bit of a struggle, so I’m over the moon right now.

Brodie Crawford qualified in eight position, and with four seconds of penalties was happy with his raw time.

“I just stated nice and composed, didn’t try and rush any of the moves, just tried to put my boat in the spots that I planned and it came off well,” Crawford said.

“I’m really happy all three of us are through, it’s been a while since we’ve done that at U23 worlds.

“I’m really happy with my raw time, it’s up there with the best, and there were a few mistakes so I know I’ve got the pace to really punch for the final.”

Steven Lowther also got through to the semis, finishing 13th.

“It was pretty touch and go for the first half, but I’m really happy I managed to get it back together for the second half,” Lowther said.

“I was feeling good, but definitely a little bit nervous. This is my last U23 world champs, and I haven’t had the best track record in the past, so to go out with a bang would be awesome.”

Georgina Collin celebrated her return to the Australian team by qualifying for the semi-final of the U23 K1. She finished fourth on her second run.

“It wasn’t super-fast, but it was clean and I’m really so stoked,” Collin said.

“I was so nervous, especially before my first run, I had so many butterflies in my stomach. Sitting on the start line I just kept telling myself to breathe.

“My goal was to make it to the semis, so I’m so happy to have made my goal. I missed the team last year by such a small amount and I was so upset. I took a few years off and then I decided to come back, but I didn’t think I’d go to a world championships again. All of this is a bonus.”

Angus Thompson was the only Australian not to make the semi-finals, picking up two gate touches on his second run to cruel his chances of making the next round.

Racing resume on Thursday with the heats in the Junior events.

Watch racing live via www.canoeicf.com or via youtube HERE.

Athletes interview can be found on www.facebook.com/auspaddleteam