Home Team Canoe Slalom Team Australia’s Junior Paddlers Advance Through To Next Round of Racing At Canoe... 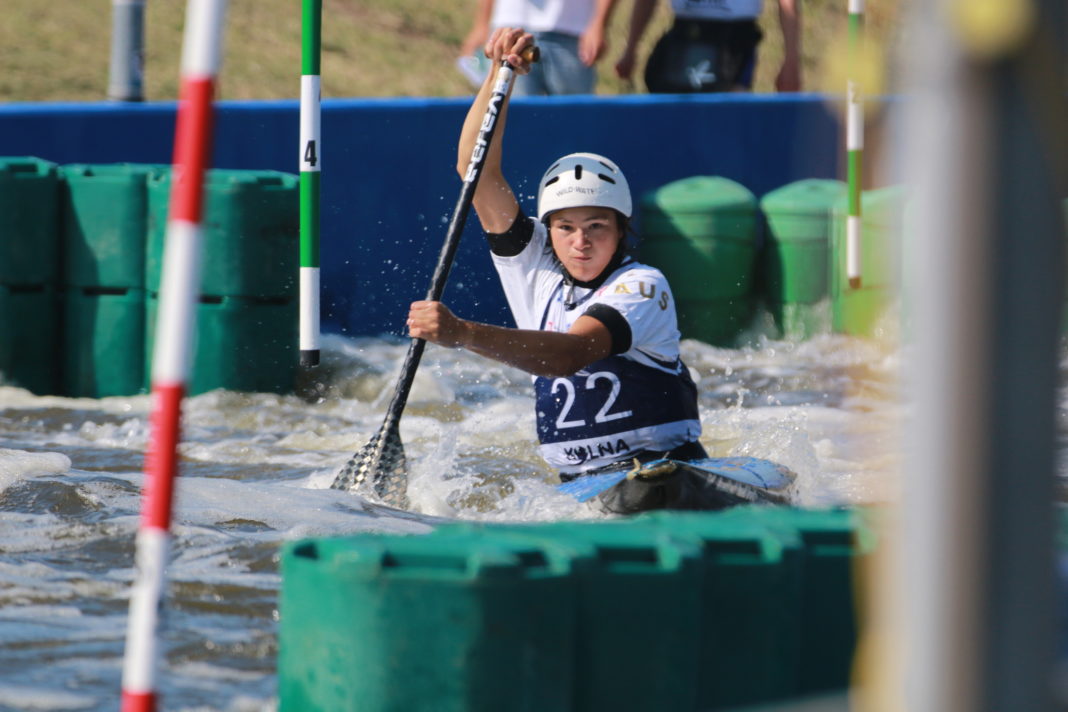 It was another outstanding day for the Australian team at the ICF junior and U23 canoe slalom world championships in Krakow, Poland although there were plenty of nervous moments as the juniors took to the water for their first day of individual competition.

Perth’s Jack Choate qualified through to the semi-finals of both the junior K1 and the C1, Daniel Shamieh (VIC) will join him in the C1, while Joshua Montalto (VIC) had to wait for what seemed like an eternity before being confirmed in the semi-final field for the junior K1.

Alexandria Choate bounced back from a disappointing K1 to qualify for the semis of the C1, but Sophie Wilson (K1), Bradley McLaughlin (K1) and Mark Crosbee (C1) all narrowly missed out on progressing.

It was a long day for Jack Choate, who got through to the K1 semis on his first run and the C1 semis on his second run.“I was off to a bit of a rocky start this morning in the C1, but came through on my second run and that gave me a lot of confidence with the course,” he said.

“I was pretty confident on my run that I would be able to make the semis.”

His sister was devastated after missing the cut for the junior K1 in the morning, and also came up just short on her first run in the C1. But she put it all together on her final run of the day.

“I’m tired, but happy to make it through,” she said.

“Today was a bit mixed, a bit of a disappointment, but at least I could pull it together to get through on the last run.

“For me it’s about forgetting about what has just happened. I like to listen to music, distract myself, reset and then get ready to go.”

Daniel Shamieh’s first world championships is off to a strong start, qualifying on his second run for the semis of the junior C1.

“I was a bit disappointed with my first run, but I really took the opportunity to give it my all on the second,” he said.

“This has been an amazing experience, I wouldn’t trade it for anything really.”

It was an even longer wait for his team mate from Melbourne Canoe Club Joshua Montalto, who had to watch on nervously after his second K1 run to see if his world championships were over. He ended up qualifying in tenth position on the second run, squeezing out his teammate and close friend, Bradley McLaughlan, by just 0.1 of a second.

“I can’t describe it, I can’t put into words what happened, I don’t really know what to say,” an emotionally drained Montalto said after the race.

“One of my friends was 0.1 behind me, it could have been me or him on any other day. I have so much respect for him.

“I was just hunched over, face in my hands, I couldn’t watch anything. I never want to be in that position again. I have so much relief. After last year, I said I would be back, and now I’m back and I’ve redeemed myself.”

McLaughlan said he will learn from Thursday’s experience. “It’s a little margin to lose by, that’s for sure,” he said.

“It’s quite heartbreaking, but there was nothing I could do. I think I’ve learned a lot, I feel like I have the pace to be higher up, it’s just putting it all together.”

Penrith-paddler Sophie Wilson raced with her wrist heavily strapped and only just fell short of qualifying for the semis of the junior K1.

“It wasn’t the best run, but I’ve done a lot of learning,” she said.

“I was nervous, I was excited. I know that I need to not touch gates, and be more cautious on the water and be aware.

“My goal was to do the best I could and have fun. My wrist was quite sore when I was paddling, but I just had to work through it.” Mark Crosbee also fell agonisingly short of a place in the semi-finals. He finished his second run in the junior C1 in 13thposition, just over one second outside 10thplace.

“I’m a bit gutted not to make semis, but I proved what I could do on my second run,” he said.

“My first run I was feeling pretty sick, I nearly threw up, but I felt a way to cope with it on my second run and felt more relaxed.

“It means a lot for me to be here. It’s amazing to be representing Australia at a world championships.”

Racing resumes on Friday with the U23 and junior men’s C1 and women’s K1 semi-finals and finals.

More athlete interviews can be found on www.facebook.com/auspaddleteam