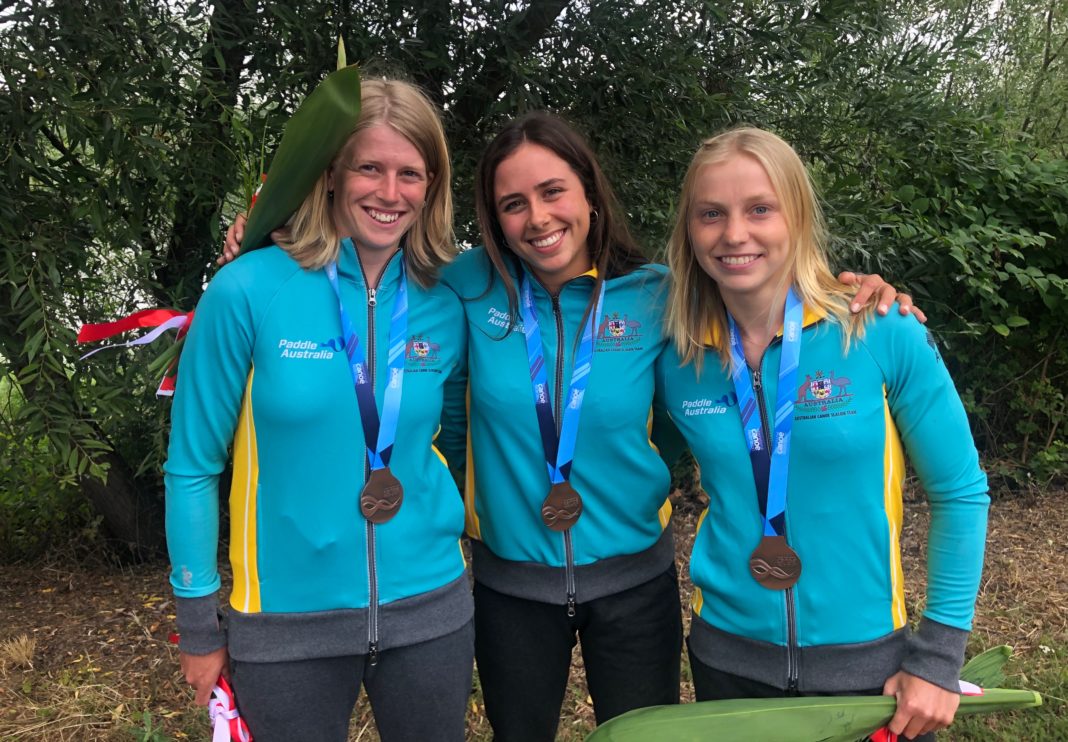 Australia’s long tradition of winning canoe slalom world championship team medals continued on Tuesday with a bronze medal for the women’s U23 C1 team at the junior and U23 titles in Krakow, Poland.

There were several other strong performances by Australian team members alongside the medal-winning exploits of Noemie Fox, Kate Eckhardt and Demelza Wall, which has set a platform for a strong showing by the team from down under this week.

The C1 bronze medal was the only non-European medal on an opening day dominated by France and Italy. For Wall, it was also her first ever world championship podium.

“It feels pretty good,” Wall said. “I was really nervous. I just kept telling myself in my head to have fun and focus on my paddling. I slept ok last night, but I can’t eat during the day.

“It was nice to put down a good run, and it’s nice to share it with Noemie and Kate, it’s fun to paddle with them.” Fox said the European teams have an advantage over the non-European countries because they all competed at their continental championships earlier this month.

But she said the trio are already looking forward to next year.

“We don’t have the European championships to practice at,” she said.

“It’s our first team medal together, and we have another year of U23 to come as well.

“We had a pretty strong plan, but obviously with teams you have to be able to adapt and be flexible. But we were confident and supporting each other.”

Fox and Eckhardt also competed alongside Georgina Collin in the K1 team event in the morning, finishing sixth. Eckhardt said it helped for their C1 preparation.

“I think we learnt from our mistakes,” she said. “There was one little tricky bit on the course where  we made a mistake in the kayak, so I think that really helped our plan setting for the C1.

“Obviously there are differences, because you only have one blade in the C1. And also it does make you a bit tired.”

The Australian men’s U23 K1 team of Steven Lowther, Tristan Carter and Brodie Crawford finished seventh in their event, picking up six seconds in penalties for gate touches. Their raw time was the quickest on the course.

“Overall we had pretty good speed, and we felt pretty good and comfortable together as a team,” Choate said.

“It was just a small mistake in the middle which cost us.”

The junior and U23 world championships continue on Wednesday, with U23 men’s and women’s K1 and C1 heat runs.

See the Australian race times below and the schedule HERE.

Watch racing live via www.canoeicf.com or via youtube HERE.