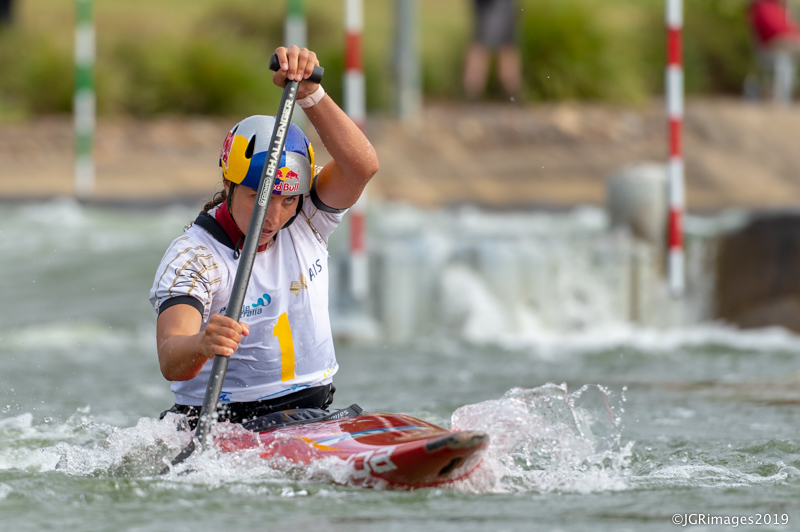 Jessica Fox returns to London after a record-breaking 2018 season that saw her unbeaten in the women’s C1 for the whole World Cup series, taking home the World Cup crown in both the women’s C1 and K1 and wrapping it all up with double World Championships gold. Fox’s individual World Championships gold medals stand at seven now, making the 25-year old the most successful individual slalom paddler of all time.

“2018 was a brilliant year. I think it came down to great preparation, a great team around me and really enjoying racing. Each year is different and I’m sure 2019 will bring some new challenges and tough competition. The main goal for this season is to qualify for Tokyo, there are a number of world cups that count towards selection as well as the World Championships, so it’s a big year!” Fox said.

“I’m really excited to be back in London and get the feel for the course again. Lee Valley is one of my favourite courses and I find it one of the most physically demanding artificial courses as well because there are difficult features the whole way down,” Fox added about the course she won her first Olympic medal at.

Following the 2012 Olympic Games, Fox had her last competition at Lee Valley in 2015, when she won the women’s C1, the boat class that will debut at the Tokyo 2020 games and the boat class she remains unbeaten in after also taking home the win at the Australian Open and Oceania Championships earlier in the year as well as winning the class at the Pyrenees Cup a couple of months ago.

“The goal is to race my best race and get the international season started. Double gold – that would be the perfect weekend, but the racing is always tight and exciting and the competition is very high and getting better each year,” Fox said about her expectations.

“The women are pushing the boundaries and racing faster and tighter lines. The British women are consistently in finals and on the podium and I bet the British girls will be firing on their home course, so they will be hard to beat here at home.”

Jessica Fox, Noemie Fox and Ros Lawrence will all double up in both the women’s K1 and C1 events. In the men’s events, Daniel Watkins will also double up, while Lucien Delfour and Tim Anderson will contest the K1 and Steven Lowther the C1.

Racing starts at the Lee Valley Whitewater Course on Friday (14 June 2019) with the men’s and women’s K1 and C1 heats.

Lee Valley is the first of four World Cups, followed by a World Cup final. The circuit continues in Bratislava, Slovakia and Ljubljana, Slovenia the following weekends.
All of the finals from the World Cup series and World Championships will also be available on the Olympic Channel