Home Team Canoe Slalom Team When It Matters Jess Fox Is At Her Best – K1 World... 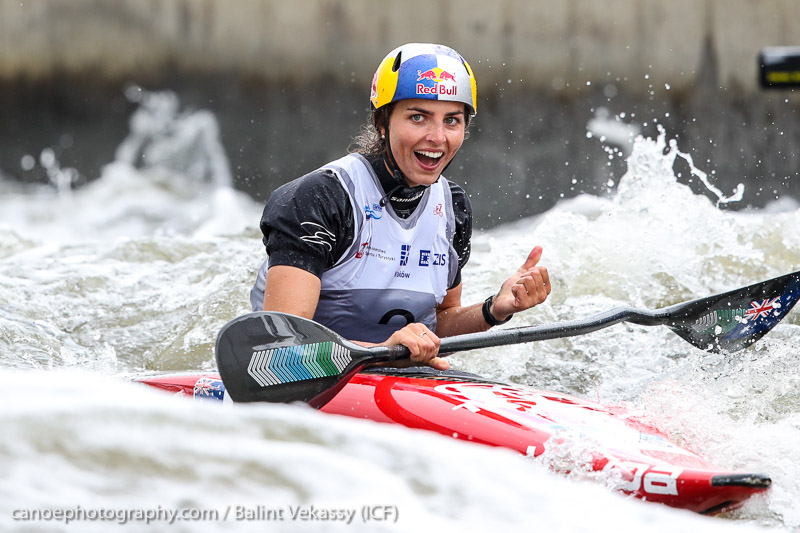 Jess Fox found her best form when it mattered to take out a third World Cup gold medal from as many races when she won the women’s K1 final at the second Canoe Slalom World Cup of the season in Krakow, Poland, on Saturday (30 June 2018). She finished the final in 91.51, 0.89 seconds ahead of surprise silver medallist, Lucie Baudu of France, with Italy’s Stefanie Horn finishing third. “I didn’t have a great start in the qualifications, I was a bit messy and too cautious, so to back it up and really attack it in the final, I’m so pleased and quite surprised to take the win again,” Fox said.

“The gates that were set today were quite hard, and some of them not really using the water, so it was really physical and you had to keep it together the whole way down.

“It’s such a difficult course, and quite hard on the arms. I didn’t go as fast as my semi-final, but I was clean and tidy, with no major mistakes and a sprint to the finish. I’m so thrilled to win again. I can’t believe it.” Fox is now a clear leader in the overall women’s K1 World Cup standings after winning the first two races at the ICF Canoe Slalom World Cup in Slovakia last week. She will have a chance to bring up another double when she contests the C1 on Sunday.

In other Australian results on Saturday, Ros Lawrence (NSW) only just missed making the final of the women’s K1, finishing 11th in the semi-final, while Daniel Watkins (TAS) picked up six seconds in penalties to finish the men’s C1 semi-final in 23rd.