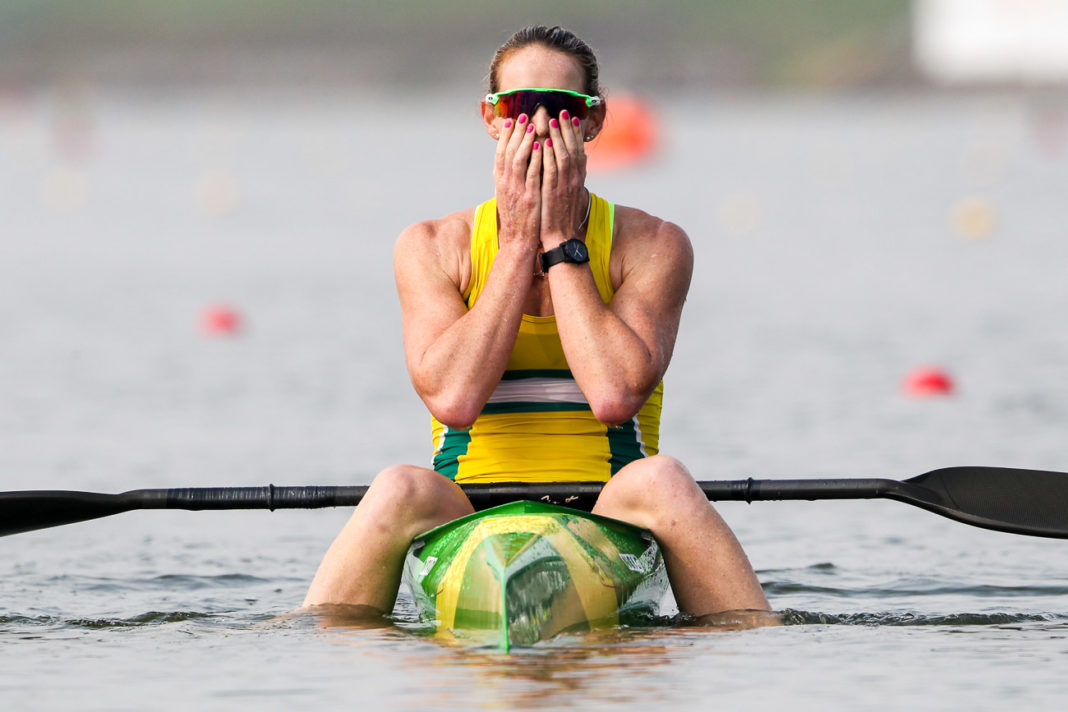 Australia has picked up two more gold medals on the final day of competition at the 2017 ICF Canoe Sprint World Championships, with the men’s K4 1000 and Alyce Burnett in the K1 1000 getting the honours in front of a capacity crowd in the Czech village of Racice.

Burnett, who made her Olympic debut last year alongside Alyssa Bull in the K2 500, went out hard early in the 1000, and was able to hold her lead over the closing stages of the race.

“I haven’t done to many 1000’s internationally, so I wasn’t sure where I was going to sit. Coming through the 500 I was a fair way in front, and to be honest I had a bit of a thought ‘maybe I’ve gone out too hard here’.

“But the last 20 I knew I just had to stay in my boat and I had it. It was an amazing feeling, crossing the line first.”

The K4 1000 crew of Ken Wallace, Riley Fitzsimmons, Murray Stewart and Jordan Wood were determined to go out on a high in an event that is no longer part of the Olympic program, and having won the Olympic gold in London in 2012.

Stewart, the only remaining member of the Olympic crew, said victory was bittersweet.

“It’s definitely special to win a World Championship, we’ve come close a few times, but that was a good way to send the event off,” he said.

“It’s a pity that we won’t get to race it that much going forward, but it was good fun out there.”

Wallace is the most experienced member of the team, and said it was exciting to win a sixth World Championship gold medal.

“It’s nice, it’s actually really nice to be able to call yourself World Champion again, and in a different event where you can actually stand on a podium with some mates,” he said.

“The amount of time we actually spent in that boat, it just goes to show the experience the four of us have, we can throw something together on the day and lead from start to finish.”

Wood, who partnered with Fitzsimmons to win World U23 K2 1000 gold in 2015, said it was special to win a gold at a senior World Championships.

“It means the world to me, it’s an event that I really love,” he said.

“I’ve raced it over the past few years and haven’t got on the podium. This could potentially be the last K4 1000 that we do, so to come away with a gold is just unreal.”

Fitzsimmons said to win with a limited preparation was a great result.

“We’ve been paddling in the boat once a week, and we’ve really been trying to do that exact race in training,” he said.

“I feel like in training we couldn’t quite really nail it, but today was our day, we did the perfect race.”

Burnett said despite the gold, which follows on from Bull’s gold in the World U23 1000, the focus was still very much on the K2 500.

“We’ve got a really good crew behind us, and a good training squad as well, and we work really hard day in and day out,” Burnett said.

And Burnett said to win gold on the same day as boyfriend Jordan Wood was extra special.

“How cool is that, we are both going home World Champions,” she said.