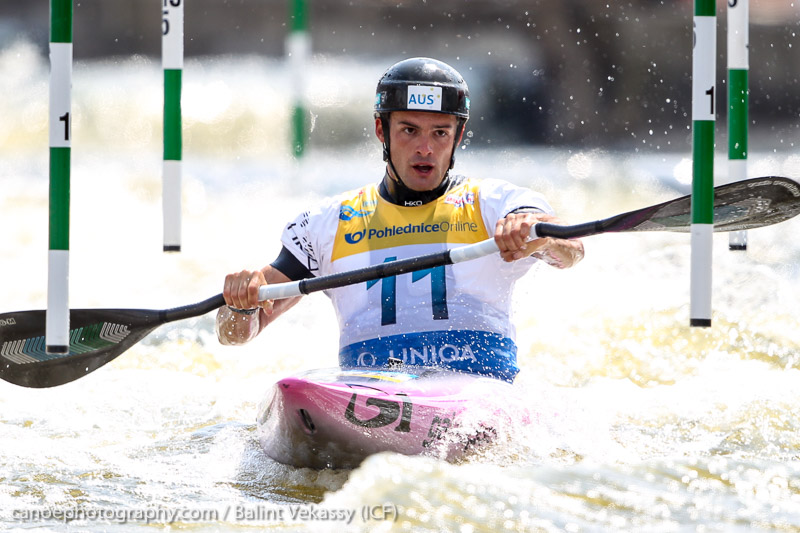 The lead-up to Lucien Delfour’s first K1 run at the ICF Canoe Slalom World Cup in Prague on Friday was absolute chaos.

But it seemed to work for him, with the Australian posting a sizzling run to qualify fastest for this weekend’s semi-finals, and in the process edging out a trio of highly fancied Czech paddlers competing on their home course in front of their home crowd.

Fox, sister Noemie, Lawrence and Kate Eckhardt will all compete for a place in the C1 final on Saturday afternoon, Australian time.

The chaos in the Delfour camp was entirely avoidable, but who can judge the mindset of an elite athlete as they prepare for competition.

Firstly, Delfour had forgotten he had sent the seat from his boat in for repairs the previous evening, so he had to scamper back to the repairers to retireve it.

Then he discovered his boat was too light, even with the seat back in it, so it was another scamper to find the weights to make his craft legitimate.

Eventually he got on to the water, and now the scorecard tells the story; 77.43, finishing ahead of the highly fancied Czech pairing of Vavrinek Hradilek and World Champion and Olympic bronze medallist, Jiri Prskavek.

“Maybe it worked well for me, gave me less time to think about my race,” Delfour said.

The solid opening run was a good confidence boost for the 2016 Olympian.

“I was a bit surprised because in the past I haven’t done that well on this course,” he said.

“It’s the first time I’ve had a really good run straight away, so I’m pretty pleased. And it’s always hard to beat the Czechs on their own course.”

Delfour has always had a reputation for speed on the K1 circuit, but his prowess always carries risk.

At Rio last year, Delfour’s first Olympics, the Australian attracted a 50-second penalty for a missing gate which cost him any chance of a Games final.

It means when he gets it right, the results are always good.

“It’s full of doubts and certainty, but it was great to get that run out of the way, hopefully I can do the same again in the semi-final and final”

Jess Fox, a multiple world champion in the C1 and K1, took a careful approach to her qualifying runs on Friday, but was content to be into the semis of both events.

“It wasn’t perfect,” she said after qualifying in 11th place in the K1.

“I made mistakes, I was pretty cautious because it was very windy and I felt like I couldn’t attack the ups like I wanted.

“I was a bit disappointed with my penalties in the C1, but my objective was to just make it through to the semi-finals.”