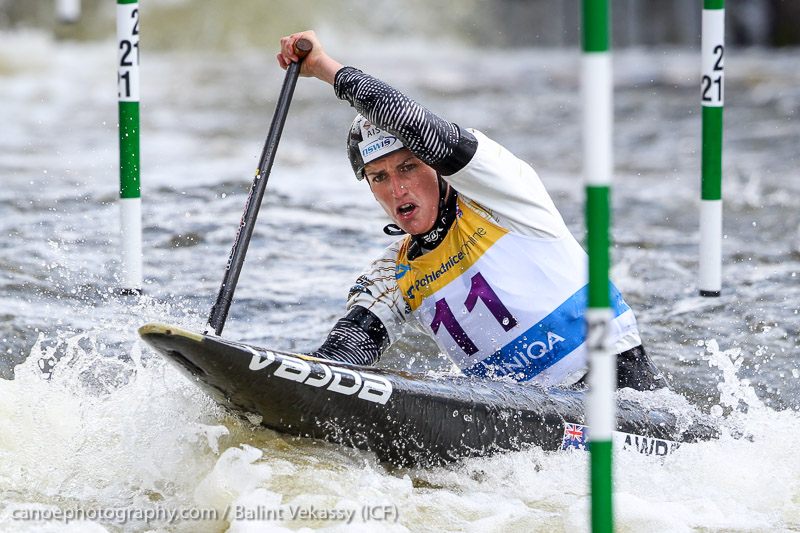 Australia’s Lucien Delfour and Ros Lawrence have put in brave performances but finished outside the medals in their respective finals at the ICF Canoe Slalom World Cup in Prague.

Delfour was left fuming after picking up a two-second penalty which left him in fourth place in the men’s K1 final, while Lawrence’s chances of a podium in the women’s C1 evaporated when she picked up a 50 second penalty for a missed gate.

Without the two second penalty Delfour would have finished third behind Czechs Vit Prindis and Jiri Prskavec.

“I’m really pissed off, I did what I could on the water, it was pretty windy, and I know I didn’t touch that gate,” he said.

Delfour was the quickest paddler in qualifying, and went into the final as the equal third fastest.

But he said he still knew winning a medal would be difficult.

“I wasn’t overly confident to be honest,” he said.

“It’s always hard to race in Prague, it’s always so tight and the Czechs are always so sharp.

“So I knew I had to put down a good run, even though the conditions were quite hard today. But it just didn’t work out.”

Lawrence went into the C1 final as the fastest qualifier and the only Australian, after teammates Jessica and Noemie Fox and Kate Eckhardt all picked up 50 second penalties in the semi-finals.

Lawrence was also the only athlete in the semi-finals not to pick up any penalties, but in the final she struck early trouble, missing a gate and attracting an automatic 50-second penalty.

“I guess the process was good, so I’ll work on that for next weekend and see what happens.

“I haven’t raced a lot of these girls internationally for a long time, so it was good to see that I’m still up there. I’ve got a brand new boat too that I’m not really used to, so it’s nice to know that I can still do it in this boat.”

Lawrence said she felt good going into the final, but then heard the commentator announce she had a 50 penalty.

“I thought I was okay, but then when things go wrong in hindsight, it’s easy to say I wasn’t,” she said.

“But the actual final was a long series of disasters. But there were some good bits.

“I just tried to make the rest of my run go as well as I possibly could, but I guess at some level, knowing I got a 50 I maybe paddled a little differently.”

Lawrence eventually finished ninth in her first major event since taking a year off from international competition.

She’ll join Jess Fox and Eckhardt in today’s K1 semi-finals, and then head to Augsburg for World Cup 2.

“There are four more World Cups to go, at some great courses, and the level of C1 racing is getting better and better in every race so it’s an exciting field to be part of,” she said.