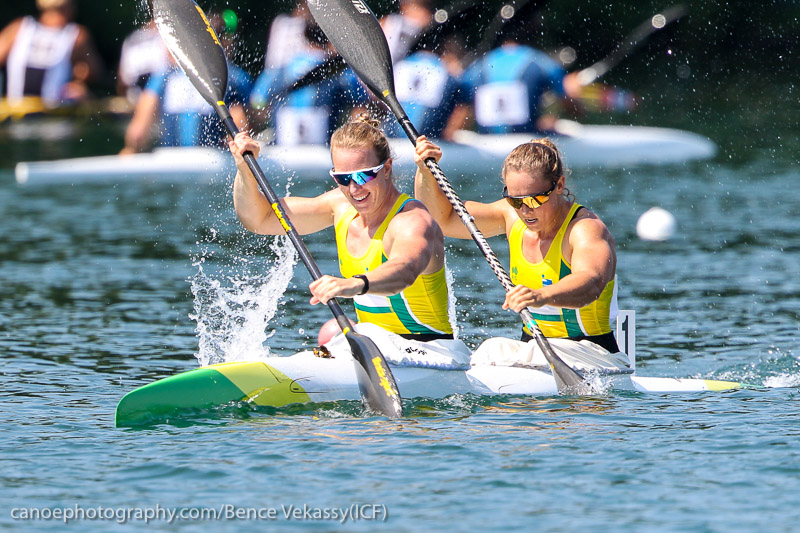 Australia has picked up a gold and a silver medal on the final day of competition at the International Canoe Federation Sprint Canoe World Cup in Belgrade.

Alyssa Bull, who won silver in the K1 1000 in Szeged one week ago, cemented her reputation as the iron woman of canoe racing with a solid win in the K1 5000 final on Sunday afternoon.

Jo Brigden-Jones joined WA’s Jaime Roberts to win silver in the K2 200, adding to the silver medal she won in the K1 1000 on Saturday.

Earlier Bull teamed up with Olympic teammate, Alyce Burnett, to finish fourth in the K2 500, agonisingly close to a breakthrough podium at an international meet.

“It sucks to be so close, but we’ve made a lot of improvements in the past year or two and we can’t be disappointed with where we are at.

“It just puts more fire in your belly for Worlds coming up.”

“Our aim for these World Cups was to make top half of A-finals, and I suppose just to come so close, it makes us more hungry,” Bull said.

Brigden-Jones said it was a shock for her and Roberts to win a K2 medal in their first international race together.

“It’s pretty crazy, I really didn’t expect it so it’s a bit of a bonus,” Brigden-Jones said.

Roberts said the silver medal was a highlight of her career.

“We nailed our start, and it just set up the race perfectly,” she said.

The Australian team heads home on Monday and will return to Europe for the Sprint Canoe World Championships in the Czech Republic in August.