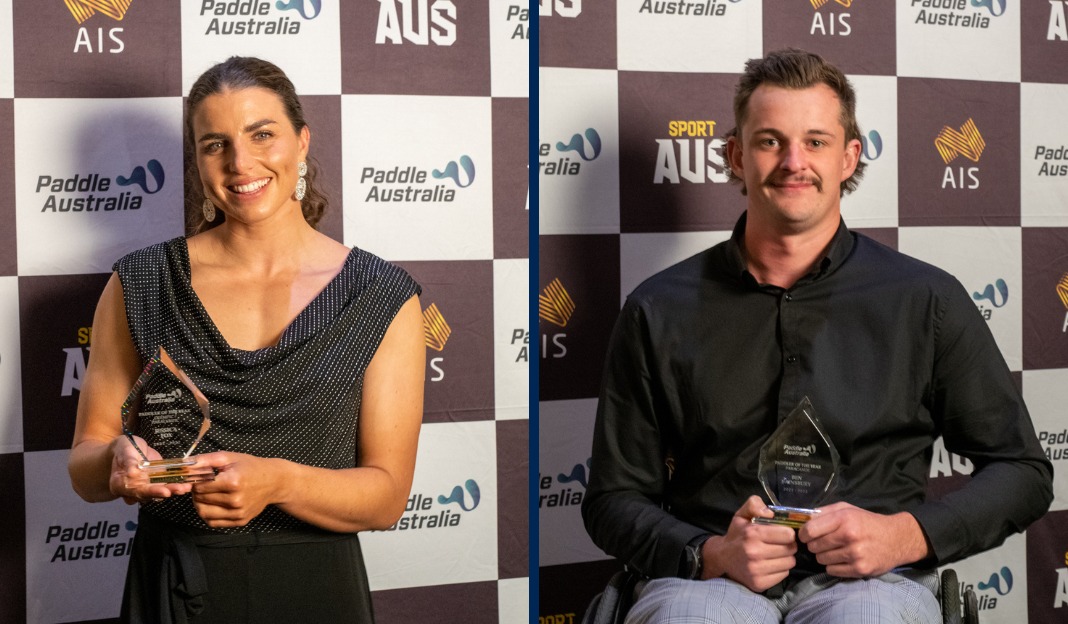 The paddling community shone bright tonight at the 2022 Paddle Australia Awards, with a gala event in Sydney celebrating achievements over the past 12 months.

Olympic gold medallist and world champion Jessica Fox was presented with the Athlete of the Year (Olympic Disciplines), adding yet another accolade to her ever growing collection.

“It is an honour to win this award and it has been such a great season for me,” Fox said.

“I had some ups and downs, but taking the overall World Cup win (kayak) and backing up the world title in the Kayak Cross (formerly known as extreme slalom), I was really happy with my performances.

“It’s also left me hungry to improve on the areas that I can see there is still more to learn and more for me to give,” she said.

Almost 18 months on since winning gold at the Tokyo Olympic Games, Fox said it has been business as usual despite the next Olympic Games in Paris 2024 only being 18 months away.

“Coming off an Olympic year, with a big build up especially with the delay it was really different to other years.

“It’s not that I didn’t have expectations this year, but it was a year of trying new things…getting on the start line and putting down the best runs that I could.

“Next year, 2023, is when it starts to build back up again and we look forward to things like Olympic qualification, so it will be a different year next year,” she said.

Paracanoe rising star Ben Sainsbury took out the Athlete of the Year (Paracanoe), after bursting onto the scene at the 2022 ICF Canoe Sprint and Paracanoe World Championships.

“It’s been an amazing experience, I was up against some great athletes and people (Dylan Littlehales and Susan Seipel) and it’s an honour to be named the winner of this award,” Sainsbury said.

“This year has been surreal, it’s all happened so quickly – being my first year at the World Championships and to win a world title has been amazing.

“I didn’t expect it and I still can’t believe that it’s happened – it’s been such a crazy season and year for me,” he said.

The 21-year-old, who hails from Western Australia, won gold in his international debut, in the men’s VL1 200.

“My coach Shaun Caven gave me a pep talk before we headed down for the race, and I was a bit emotional,” Sainsbury said.

“So my emotions were building up that whole time and when I executed the race like I wanted to and crossed the line first I looked straight at my Aussie teammates and support staff on the shore and I was so proud.

“To have that crew support me, and to know what I’ve been through and taken my family and friends through since my accident – it was nice to be able to repay them a little bit and give them a little bit of a high too,” he said.

Terry Bolland (WA) was awarded the prestigious President’s Award after the 70-year-old paddled every day for a year, amassing 14,000kms and raising $17,500 for the Prostate Cancer Foundation.

“It was such a surprise when I heard my name called, I didn’t even know I had been nominated and I wasn’t expecting it at all. It’s one of the greatest honours of my life,” Bolland said.

The women’s canoe sprint K4 were awarded Team of the Year, for their breakthrough performance at the 2022 ICF Canoe Sprint and Paracanoe World Championships, where they won silver.

Bull also won an Award of Merit for her individual K1 World title, as did Jackson Collins for their pair’s Mixed K2 500 World Championships gold.

“It’s been a great 12 months and it’s cool to be here tonight and to celebrate the whole world of paddling, which is what we all love to do at the end of the day – and it’s not just us on the sprint course it’s slalom, it’s the adventure stuff.

While he couldn’t be there to celebrate, stand up paddler Michael Booth (WA) was awarded the 2022 Paddler of the Year (Non-Olympic/Paralympic).

Husband and wife duo Chris and Brenda Hurley (QLD) were awarded Club Coach of the Year and Volunteer of the Year respectively.

NSW’s Chris Thompson was named Technical Official of the Year, and Anne Langsford from South Australia took out Instructor/Guide of the Year.

Paddle Australia President Andrea McQuitty said it was a great celebration of the Australian paddling community.

“I think this year has been the year of bringing paddlers back together across state and international borders, and it’s fantastic to have members from our diverse paddling community together for the awards this evening,” McQuitty said.

“It’s incredible to see how well our paddlers have performed on the international stage after such a long break.

“We’ve been absolutely blown away by the results of the women’s in the canoe sprint program, Jess’s (Fox) success in Canoe Slalom but also in stand up paddle boarding where Michael Booth won two World Championship titles, it’s been an extraordinary year,” she said.