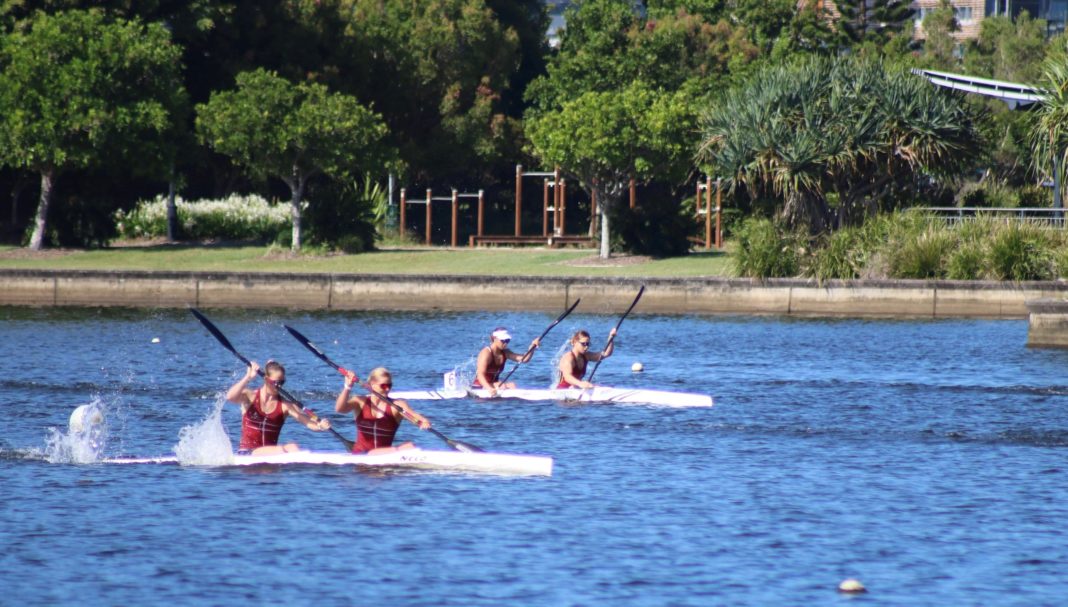 It has been a long time without races for Paddle Australia’s Olympic and Paralympic canoe sprint paddlers, but Paddle Queensland’s Canoe Sprint State Championships on the weekend (Saturday, 6 February) provided the racing opportunity everybody has been longing for.

Paddle Australia’s Tokyo 2020+1 Olympic kayakers, who were one of the last teams selected before the Tokyo 2020 Games were postponed last year, were out in force at Lake Kawana at the Sunshine Coast for their first regatta since Olympic team selections.

“It was great to be back out racing for the first time since our Olympic trials in March 2020.  We’ve been doing a lot of time trials in training in the recent weeks, but nothing beats the pressure of a race setting,” Rio and Tokyo Olympian Alyce Wood was excited to be back racing.

“We’re both really happy with the progress we’ve made in the K2 over the last year or so.  All of the data we’re producing is trending in the right direction, and it’s feeling really connected and together.  The race over the weekend wasn’t our best, and it wasn’t our worst, so we were able to pull some positives from it as well as find some things to work on and improve on in the coming months,” Alyce Wood said with the pair set to contest the K2 at Tokyo in less than six months’ time.

“It was so good to be back racing, we have been working really hard in this extra time and it was good to actually be able to have a race day,” K2 partner Alyssa Bull shared the excitement of finally being back at a regatta.

“AB (Alyce Wood, nee Burnett) and I are pretty excited with how our K2 is going and we have been able to identify areas we can improve in and still build on the parts we are good at.  It’s always a bit of fun along the way too.”

The dual Olympians grew up at the Sunshine Coast and with the whole Olympic kayak team competing at Lake Kawana, the state titles provided an exciting opportunity for the next generation to race their Olympic heroes.

“The Sunshine Coast has become a mini breeding ground for Aussie Kayakers, so it was great to be able to race State Champs up there for the first time since 2012.  There’s some really exciting talent coming through in the development squad and for them I think the weekend was a great opportunity to race our entire Olympic team without the pressure of selection like we experience at National regattas.  I’m really looking forward to seeing how they progress in the coming years,” Alyce Wood said.

The team has been training at the National Training of Excellence (NCE) at the Gold Coast under the guidance of new women’s sprint kayak coach Rene Olsen, who joined the team in January (see media release HERE).  Tokyo will be the first time since London 2012 that Australia will be represented with the maximum number of six women in the kayak events.

Tokyo team mates and Rio Olympians Riley Fitzsimmons and Jordan Wood finished second in the both the men’s K2 1000 as well as the men’s K2 500 with only 0.56 seconds separating them from Green and van der Westhuyzen in the latter.

“It was nice to finally race again and although it was a very rusty performance it was nice to be back racing,” Rio and Tokyo Olympian Riley Fitzsimmons (NSW, Avoca) said after the regatta.

In the absence of international racing last year and with an uncertain national and international competition calendar ahead, the high level of competition within the team makes all the difference as the team continues to prepare for Tokyo.

“The future is unknown for now but I can only control what I can and that’s my performance I can produce day in and day out.  So, until we get the opportunity to race again, I’ll be focussing on being better each day and staying fit and healthy,” Riley Fitzsimmons described the current challenge for athletes.

“Fingers crossed nationals (in Sydney in March) goes ahead and it would be nice to get onto a world renowned race course.  But no matter what happens, we’ll be preparing for some sort of time trial if nationals aren’t meant to be.”

While Paddle Australia’s Olympic canoe sprint athletes are already selected, Tokyo selection is yet to be confirmed for the paracanoe squad, with Paralympic medallists Susan Seipel and Curtis McGrath also enjoying the racing opportunity at the state title event.

“It was great racing for the first time in a very long time and I was extra excited to try out my new boats.  I am now paddling a Nelo para K1 and have a new Zulu outrigger canoe.  I had always planned to keep training beyond Tokyo, so Paris 2024 is something that I would like to work towards in both boats,” Rio Paralympic medallist Susan Seipel outlined her goals about contesting both the KL2 and VL2 events at both Tokyo and Paris.

Rio Paralympic champion Curtis McGrath also kicked off the season in style, by putting in strong races in both the kayak (KL) as well as canoeing event (VL) at Lake Kawana.

The ten-time paracanoe world champion also teamed up with Rio Olympic medallist Lachlan Tame in the men’s K2 500 to finish an impressive third.

While the Tokyo Olympic Games are less than six months away, the countdown to Paris 2024 for those who are aiming for one of the next Games is also well underway.

Paddle Australia’s Paris 2024 Talent Development squad, the so-called Paris 24 Squad, is offering a development path to those up and coming paddlers, who are not selected for the Tokyo Games, but have their eyes set on Paris 2024 and beyond.  The ‘Paris 24’ program aims to continue developing Australia’s next generation of Olympic paddlers and to keep them involved in the absence of international racing opportunities.

“The Paris 24 squad is a great opportunity for the athletes to train together and keep the fire alive during these tough COVID times,” former U23 team paddler and current Paris-24 team athlete Brianna Massie described the aim of the squad.

Massie, who currently lives and trains in Sydney and already put in a strong performance at the Paddle NSW Canoe Sprint State Champs a couple of weeks ago, was thankful for another racing opportunity on the weekend.

“I was so grateful that we were able to race on the weekend at QLD and a few weeks earlier as well at NSW state.  It has been a very uncertain season with racing being cancelled because of boarder closures and lock downs. It has made me appreciate how good racing is,” Massie said, who also finished seventh in the women’s K1 500 A final.

With Brianna Massie, cousin Jenaya Massie, Mackenzie Duffy and Alexandra Clarke Queensland is represented with four female kayakers on Paddle Australia’s current Paris 2024 Talent Development squad.  All four originate from the Sunshine Coast and are keen to follow the footsteps of their fellow Sunshine Coasters and Olympic paddlers Alyce Wood and Alyssa Bull.

“The Sunshine Coast is an absolute breeding ground for phenomenal athletes.  We are so lucky to have had a number of athletes inspire us and show us what is possible with hard work and dedication.  Alyce grew up in Maroochydore Surf Club a few age groups above me and opened up my world to dreams that I wouldn’t have otherwise known were in reach,” Brianna Massie explained.

“On top of that, the Sunshine Coast has unsuspecting athletic personal at every step, especially in the surf club in environment. I am lucky to have met so many that have inspired and taught me along the way.”

“I am so, so proud to have been included in the Paris 2024 Squad and my goal is to be selected for the 2024 Summer Paris Olympics.  Being a member of this team is encouraging me to train and learn from experienced paddlers, improve my technique and hopefully, race my best yet!  As a younger kayaker, I have learnt how important it is in kayaking to work well as a team, so this squad gives us plenty of opportunity to practise this skill,” Jenaya Massie said about being part of the Paris 24 squad.

“I have been lucky enough to have joined in a few sessions with the new open women’s coach, Rene Olsen.  This has definitely been a highlight for me and I am really looking forward to benefiting from Rene’s paddling wisdom in years to come,” Massie added about her recent training opportunities at the NCE.

The Sunshine Coaster, who now lives at the Gold Coast, and is coached by triple Olympian, Olympic Champion and Queensland Academy of Sport (QAS) Head Coach Ken Wallace, has been enjoying her time with the QAS team.

“Racing on the weekend was great and I was stoked to be back on the water with the QAS racing team.  It was fantastic to finally race at a regatta, and even better that it was at my old training grounds, Lake Kawana and it was awesome to have interstate competitors too.  There was definitely a buzz and everyone was just happy to be paddling,” Jenaya Massie said about the weekend.

“I think that a major factor contributing to the days racing success was the awesome support that athletes have received leading up to the Sprint Champs.  Spending the off season down on the Goldy with Kenny Wallace, the new QAS coach has been a big inspiration for me.  Ken’s QAS team is just awesome to train with.  Ken’s training environment is super positive and encouraging, and we can’t thank him enough for his loyal commitment and dedication to coaching,” Massie added.

And while happy about her current training environment, she also credits her Sunshine Coast origins for her developments as a kayaker.

“The Sunny Coast has definitely been a good breeding ground for strong female paddlers.  The surf-life saving movement has been a big contributing factor to this without a doubt and we are all very inspired by Alyce and Aly.  We have seen them grow and develop into Australia’s best female paddlers and they have encouraged us to follow in their footsteps, so fingers crossed, one day we will be as successful as them.”

The next canoe sprint regatta will be the Paddle Australia Canoe Sprint Championships, which are scheduled at Sydney International Regatta Centre from 17-21 March 2021 with the event yet to be confirmed.