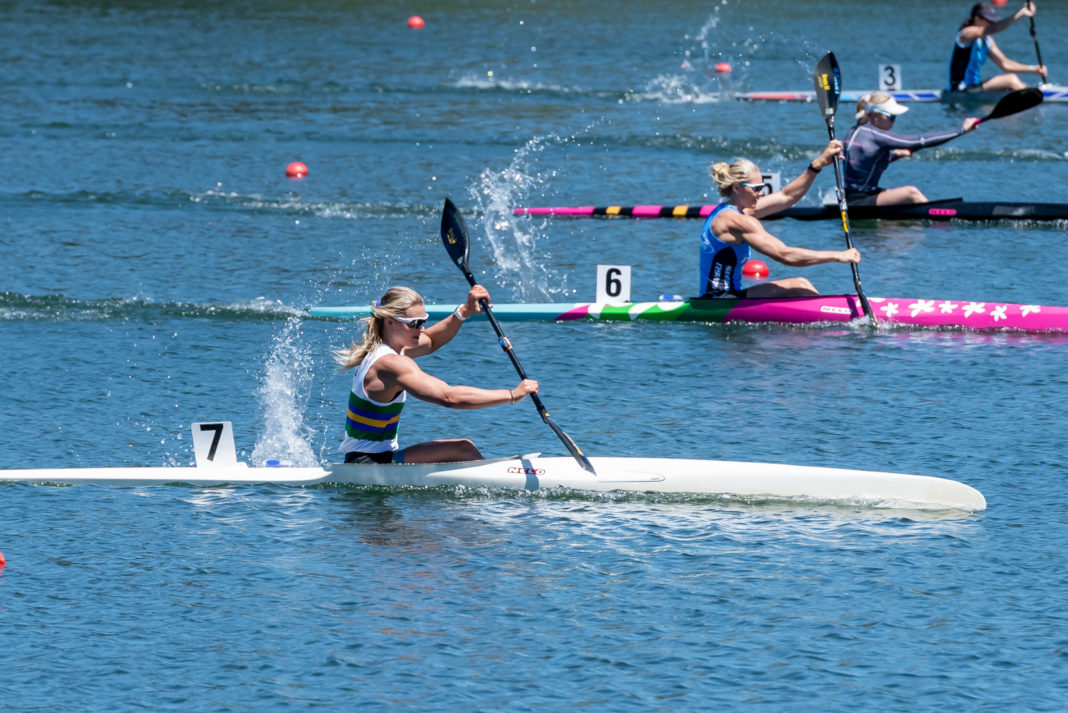 The next generation of Australia’s up and coming Olympic canoe sprint athletes has kicked off the Paris 2024 Olympiad with the first competition of the new year taking place at Sydney International Regatta Centre last weekend for the 2021 Paddle NSW Canoe Sprint Championships (16-17 January 2021).

While Paddle Australia’s Tokyo 2020 canoe sprint team is already selected and preparing at the Gold Coast, all eyes were set on those NSW based paddlers, who are aiming for the next Olympic Games in Paris 2024.

The so-called ‘Paris 24’ squad, a quality group of young developing canoe sprint athletes, underpins the current selected Tokyo Olympic Games Team and targets those athletes who have been identified as being in the pool to represent Australia at the 2024 Games.

The ‘Paris 24’ Paddle Australia initiative was launched last year with the support of the Australian Institute of Sport (AIS) and is designed for the ‘next generation’ of athletes with the aim to identify and support prospective Paris 2024 (and beyond) canoe sprint athletes, who have not been selected for the Tokyo 2020 Olympic Games.

Recognising the need to provide other development opportunities, the Paris 24 project creates opportunities that are designed to motivate, drive, upskill and fast track these athletes during the ongoing uncertain times, providing them with a goal to work towards over the next 12 months (and beyond) and to expose them to high levels of training with the aim of assisting their transition into the Senior Team.

“The NSW State Champs provided a great opportunity for more that 50% of our Paris 2024 group of athletes to race and they were very much looking forward to line up again.  There was some high-quality racing and we saw a number of the Paris 24 group really step up to a new level.  Our Tokyo Olympic team may already be selected but for this group the weekend was the first major step in the Paris 2024 journey,” David Foureur, Paddle Australia National Performance Pathway Lead – Canoe Sprint, explained.

The first year of any Olympic quadrennial cycle generally provides an excellent opportunity for the next generation of athletes to be exposed to quality development activities nationally and internationally.  In an ongoing global pandemic though, athletes for the Paris 2024 cycle have already experienced compromised access to development activities with a number of planned activities and camps over the last few months impacted by the current border restrictions, which made the NSW State Championships the first high quality regatta of the 2020/21 season and a welcome racing opportunity for NSW based athletes.

“20/21 is already proving challenging but we are doing everything to support this Paris 2024 squad to the best of our ability providing whatever support we can,” Foureur said. 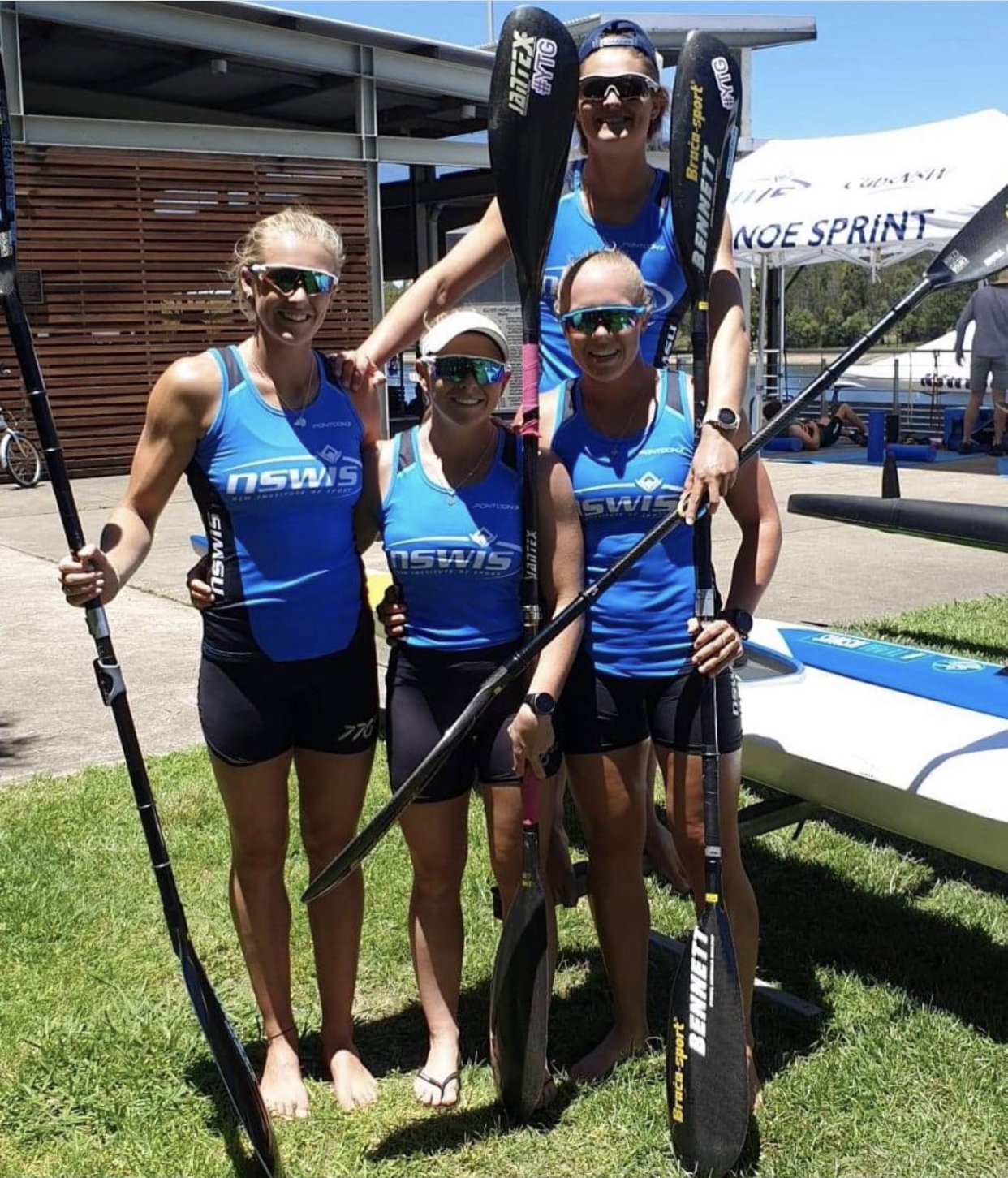 Amongst the athletes who impressed on the weekend, were Kailey Harlen (Sydney Northern Beaches) and Ella Beere (Avoca Kayak Club), who just missed out on the Tokyo 2020 selection last year, and are aiming for the Paris 2024 Games in three years’ time.

“NSW State Champs is always a great way to start the season and I was very happy with my performance on the weekend.  It has allowed me to pinpoint areas that I need to work on.  We were all extremely happy with how we raced the K4 500m and we put together a very good time.  It is wonderful to paddle with such a great group of girls
who are all so focused on working as a team,” Kailey Harlen summarised the weekend that saw her win the Olympic class events of the women’s K1 500m as well as the K2 500m together with Ella Beere.  Both train as part of the New South Wales Institute of Sport squad at Narrabeen Lake. “This weekend the NSW paddlers were hungry for some race experience and to establish a benchmark to build from leading into nationals.  Paris is a long way away and without the certainty of competitions, the Narrabeen squad and many other squads across the state have been more focused on week by week goals on how we can improve, so we are ready for anything.  We have a very strong younger cohort in our state, and the times achieved by the paddlers demonstrate some great resilience that has been so necessary in these times,” Beere said about the racing opportunity on the weekend.

At the NSW State Champs, Beere won the women’s K1 200, while Harlen also took home the win in the women’s K1 1000, with the pair adding a win in the K2 200 to their weekend medal haul.  In the women’s K4 500 both teamed up with fellow “Paris 24” paddlers Georgia Sinclair (Avoca Kayak Club) and Brianna Massie (Kawana Waters), with the latter also currently training in NSW, in a winning combination.

In dealing with the current uncertainties, both Harlen and Beere are focussing on the here and now while being thankful for their strong training squad and opportunities like the Paris 24 team.

“The Paris 2024 group is a great initiative.  Those of us in the group or close to making it are able to motivate each other and feel accountable to keep working towards a long-term goal.  It’s a long time away, so at the moment we are focusing on short term goals like improvements in technique and race strategy.  This way, when the time comes, we can feel we’ve given ourselves the best opportunity to step up,” Beere explained.

“I’m just taking every day at a time, with the ultimate goal of reaching my greatest potential in the sport,” Beere added about her approach, which is shared by Harlen.

“I try not to look too far into the future, but instead I focus on the ‘here and now’.  I love competing for my State and Institute and getting the best results I can for myself, my crew and my coaches as I know how much work they all put into each and every athlete in the squad.  Many of the Paris 2024 group are actually part of NSWIS so I feel like I am training at that top level every single day,” Harlen described her training with 50% of the Paris 24 group coming from NSW.

“I know everyone in the world is hoping that the vaccines will help but only time will tell.  My goal is to keep improving every day but I am also focusing outside of kayaking and trying to peruse my other passions in life such as being with my family and friends and also studying a Bachelor of Environment,” Harlen added about the importance of also looking beyond kayaking in these uncertain times.

Still a newcomer to the sprint team, Team NSWIS team mate Georgia Sinclair is also excited to be part of the Paris 24 squad, especially after she only joined the kayak sprint team just over a year ago when she came across from surf paddling and ocean racing.

“It was really cool to be named as part of the Paris 24 group and it’s really exciting to have the opportunity alongside such a strong group of girls.  It definitely put some ideas into the back of my mind about where I’d like to be in a couple years,” Sinclair said.

“I was really happy with my performance on the weekend, everything’s still such a big learning curve and it was really good to put some things we have been working on at training into practice.  I really enjoyed the opportunity to race and appreciated being able to,” Sinclair added about the NSW State Champs, where she finished third behind Harlen and Beere in the K1 500 and in the K2 500 together with fellow ocean racer Jemma Smith (Avoca Kayak Club).  She was also part of the winning K4 crew.

Like her team mates, Sinclair is appreciative of her strong training group in NSW. “As much as it’s uncertain times, it’s always competitive on the water and then we’re all good friends when we hop off.  We still have that sense of competition and I think we’ve done a really good job of getting through it as a team, almost not realising we’re motivating each other as we go.”

“My next goals and hopes are to continue learning and bettering myself and it’s actually been really great to have the time to ‘catch-up’ on technique in the boat and see improvements.  It is quite uncertain times so I’m not too sure what to hope for however I’d love the opportunity to finish of the season with another regatta,” Sinclair concluded.

Armstrong, who was still a Junior last year, took out the win in the men’s K1 200m, while Collins won both the K1 500 and K1 1000 events ahead of Armstrong and Jakob Hammond (Sydney Northern Beaches).  In the K4 500, Armstrong and Collins teamed up with fellow Paris 24 paddlers Hammond and Cunningham Fletcher (Avoca) for the win.

“I was pretty happy with how I went – Jake (Michael, coach) and I have identified some things I can work on though,” Armstrong said about the weekend.

“I’m pretty stoked to be a part of the squad as it gives me motivation to remain focused and keep training hard.  Paris is definitely a longer-term goal and I am also trying to keep positive about this year’s international season and achieving team selection.  Being in the squad definitely helps me stay motivated to train hard even though we don’t know what will happen internationally.”

“But it will be really disappointing if international competition is affected by Covid again – our U18’s team did not get to compete at Worlds last year and that was a big disappointment being my last year Junior,” Armstrong added about the current uncertainties.

While the Paddle Australia GP2 Canoe Sprint regatta (19-21 February 2021) had to be cancelled due to ongoing border restrictions, Paddle NSW is intending to put on a state event on 20 February.  Paddle Queensland will also be running their Canoe Sprint State Champs on February 6 with Paddle WA’s Canoe Sprint Champs scheduled for 30-31 January and Paddle SA State Championships for 6/7 March 2021.

All state events will give the Paris 24 athletes another opportunity to race ahead of the Paddle Australia Canoe Sprint Championships which are currently scheduled to take place 17-21 March at Sydney International Regatta Centre.