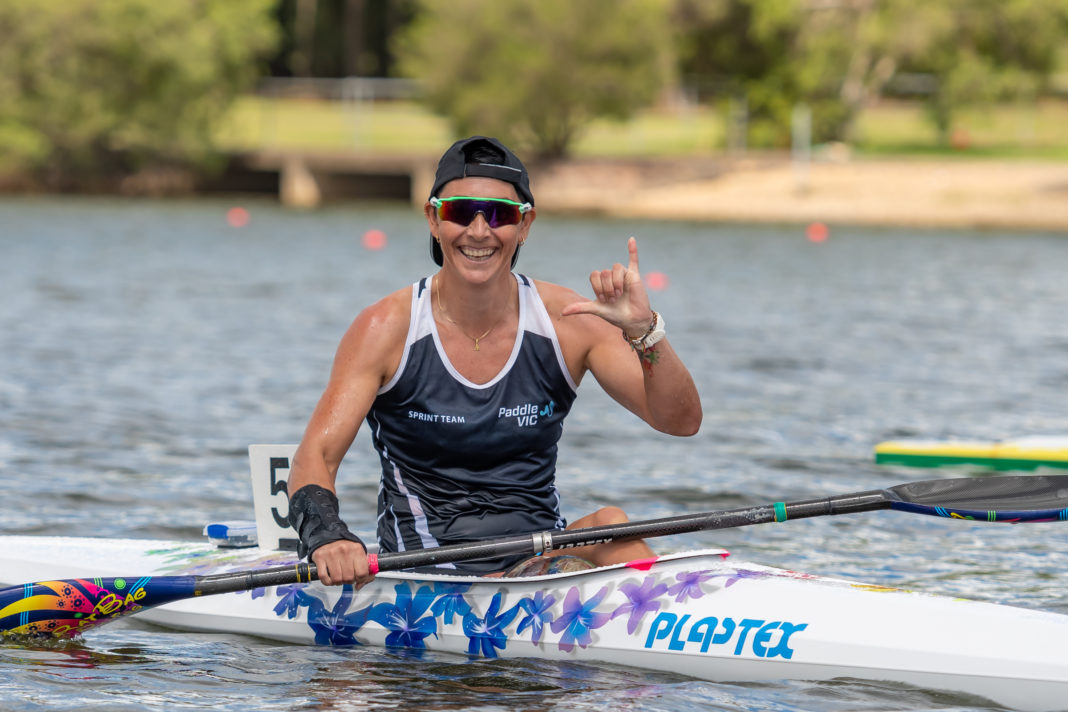 134 days out from the start of the Tokyo 2020 Games, the first Australian Olympic and Paralympic canoe sprint paddlers have provisionally locked in their Tokyo 2020 spot on the second day of racing at the 2020 Paddle Australia Canoe Sprint Championships.

Queenslanders Tom Green, Alyce Wood (nee Burnett) and Alyssa Bull made the most of their opportunities and winning the Olympic events of the men’s K1 1000 and the women’s K2 500 respectively, provisionally locked in their Tokyo 2020 spots. All three backed up their strong performances at the first round of selection trials at the 2020 Oceania Canoe Sprint Championships a couple of weeks ago (14-16 Feb) and locked in their top positions on the trial’s rankings with Thursday’s racing.

Olympic selection racing still continues until Sunday, 15 March before Paddle Australia selectors will nominate athletes to the Australian Olympic Committee for final selection. Pending all official processes, teams are expected to be announced over the next two weeks.

The 2020 Canoe Sprint Championships double up as the final round of Olympic as well as Paralympic selections and on Thursday all of Paddle Australia’s four Rio Paralympians Curtis McGrath (QLD), Amanda Reynolds (VIC), Susan Seipel (QLD) and Dylan Littlehales (NSW) also locked in their provisional spots –pending Paddle Australia nomination and selection by Paralympics Australia over the next couple of weeks.

Olympic Events – Men
Queenslander Tom Green once again was the outstanding athlete in the men’s kayaking events on Thursday, winning the semi-final in the men’s K1 1000 and backing it up with a win in the final a couple of hours later. 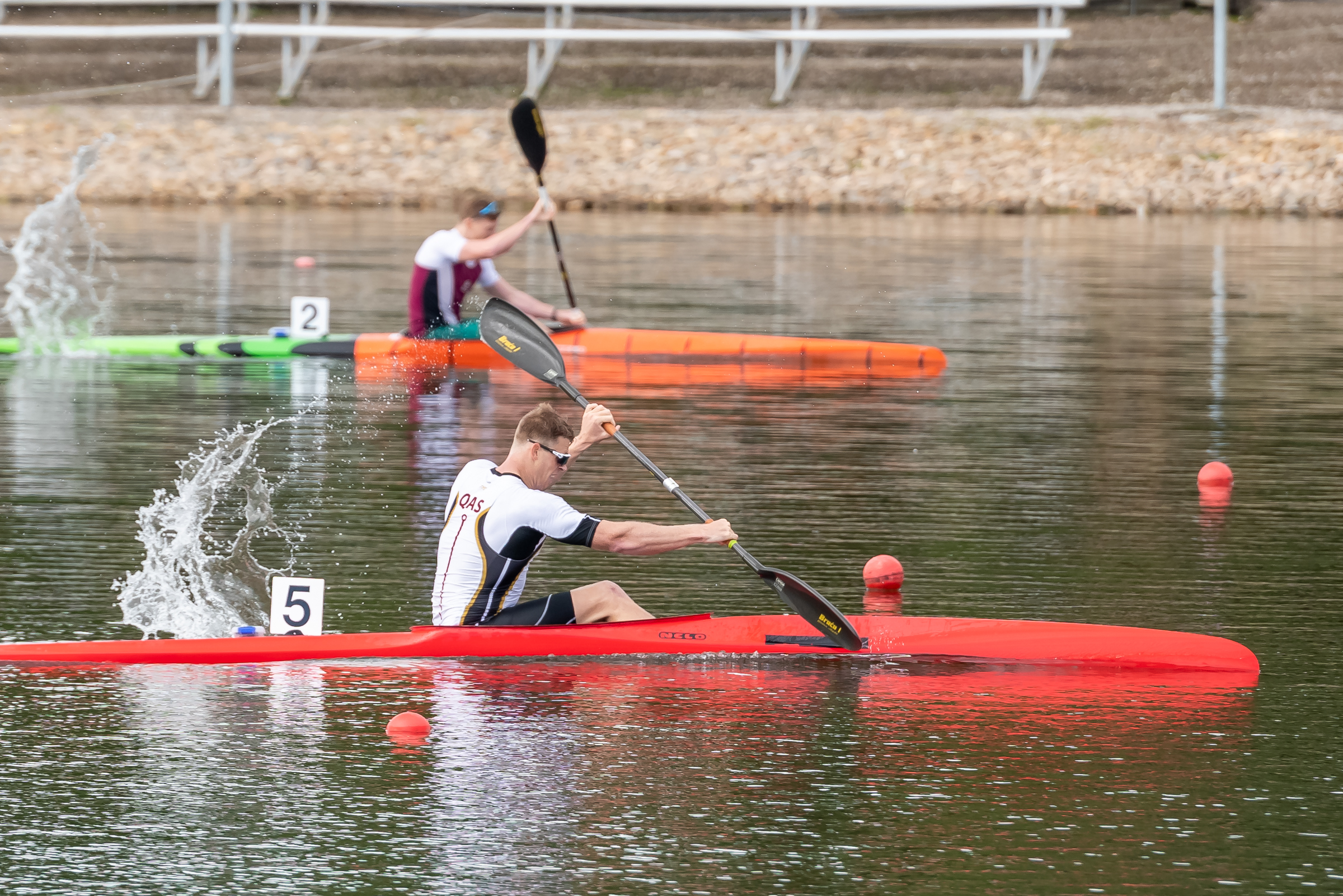 Green already was the stand-out paddler across the men’s kayaking events at the first round of selections at the Oceania Champs winning the men’s K1 1000, K1 500 as well as the men’s K2 1000 and U23 K2 1000 together with Jean van der Westhuyzen (QLD) and the win on Thursday locked it all in for the 20-year old.

“That was the goal to come and replicate what I did at Oceania and I just wanted to do whatever I can and leave no stone unturned. I did my best,” an excited Green said after the race.

In a stellar field, including Olympic champions Kenny Wallace (QLD) and Murray Stewart (NSW) as well as Olympians Riley Fitzsimmons (NSW) and Jordan Wood (QLD). the youngster showed his class taking home the win in a time of 3:36.15 and +1.10 seconds ahead of second placed Jean van der Westhuyzen with Jordan Wood following in third. 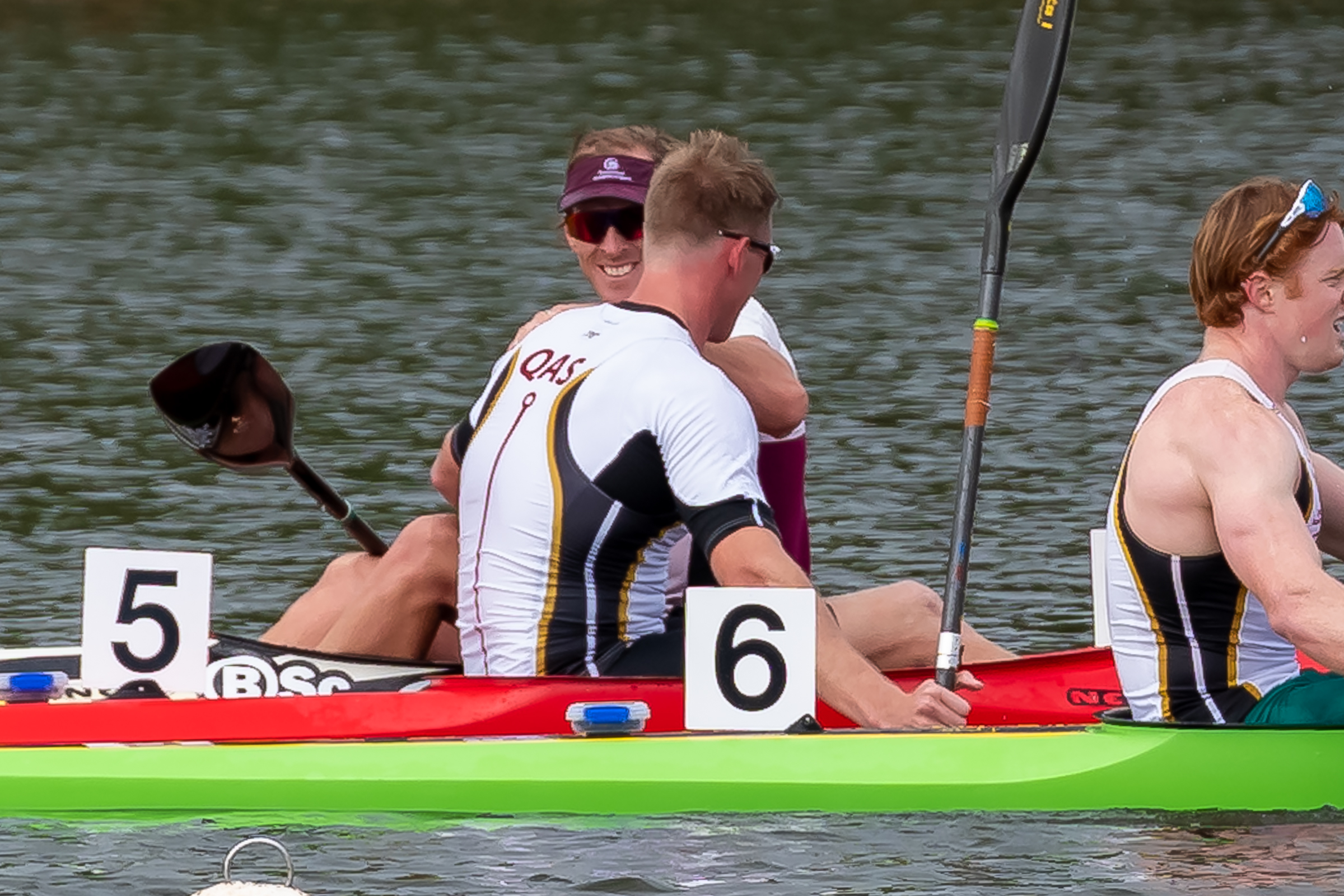 “It was definitely a tough race with a bit of a head wind which makes the race a lot longer, but it was awesome to race alongside those guys who are Olympic champions. I’ve been on teams with Murray and Kenny being around the shed all the time at Varsity and it’s good to learn from them,” Green said, who took home two U23 world champion titles last year and also was a finalist in his second world championships senior team.

Tokyo 2020 will be the first Olympic Games for Green, but with three days of racing left at nationals, Green will postpone the celebrations.

“Of course I could go and celebrate now but the job is not done yet. We still got K2 and K1 500 so I won’t celebrate until then and it also hasn’t really sunk in yet. But I think there was a lot more pressure on me at GP2. The pressure is a bit off now but we still got things to do,” Green added about the tasks ahead.

In other events, Matt Goble (SA) took out the win in the men’s K1 200, while more selection relevant racing in the MK1 500 kicks-off tomorrow with the MK2 1000 finals also scheduled for Friday. 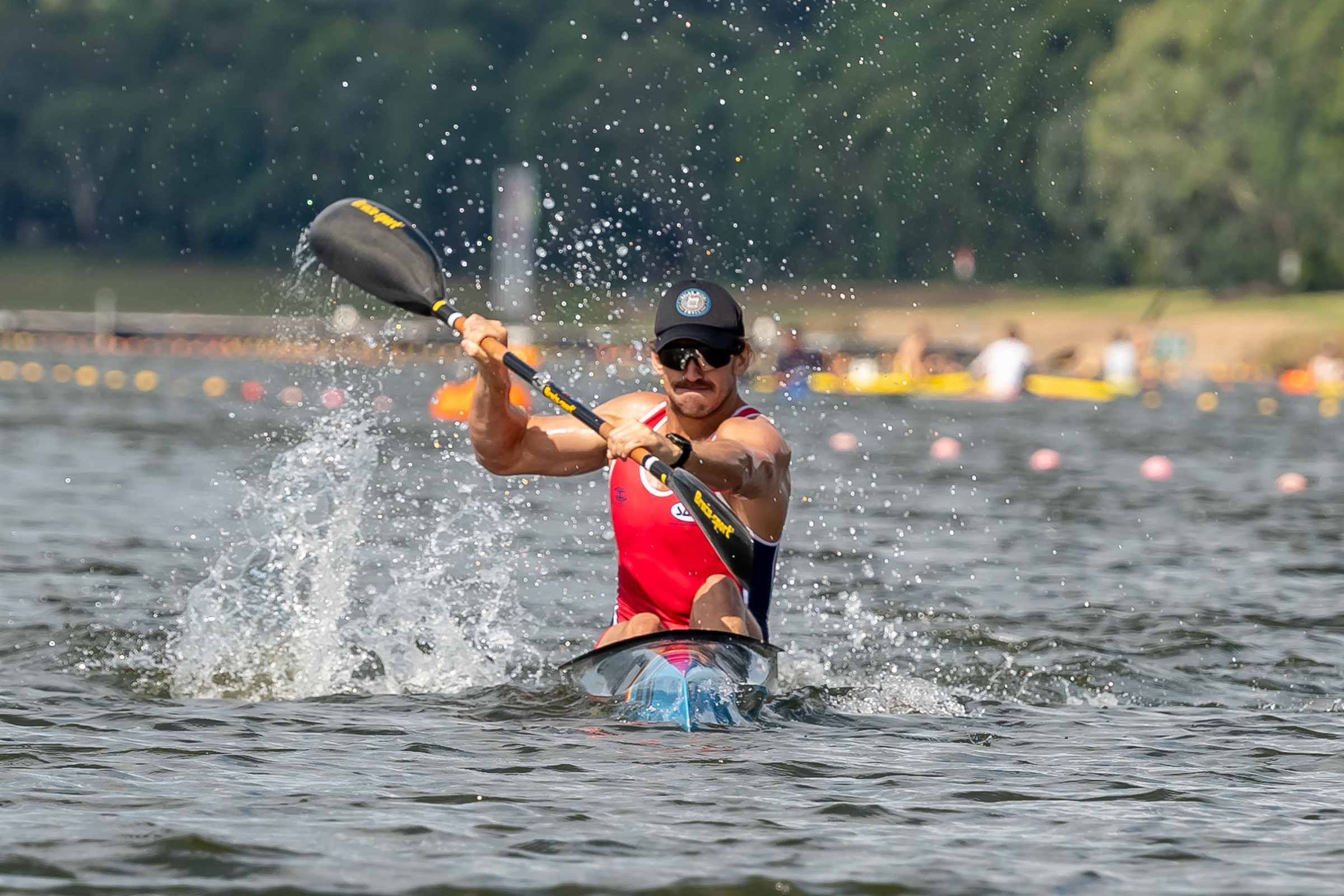 Olympic Events – Women
Rio Olympians Alyce Wood and Alyssa Bull have been the front-runners in the race for selections with the duo winning the women’s K2 500 at the Oceania Champs and adding a first and second place in the women’s K1 500 respectively.

On Thursday, the locked it all by backing it all up with another win in the women’s K2 500.
They took home the win in a time of 1:42.04 and +1.84 seconds ahead of second placed Jaime Roberts (WA) and Jo Brigden-Jones (NSW). South Australian Cat McArthur and Briana Massie (QLD) finished third. 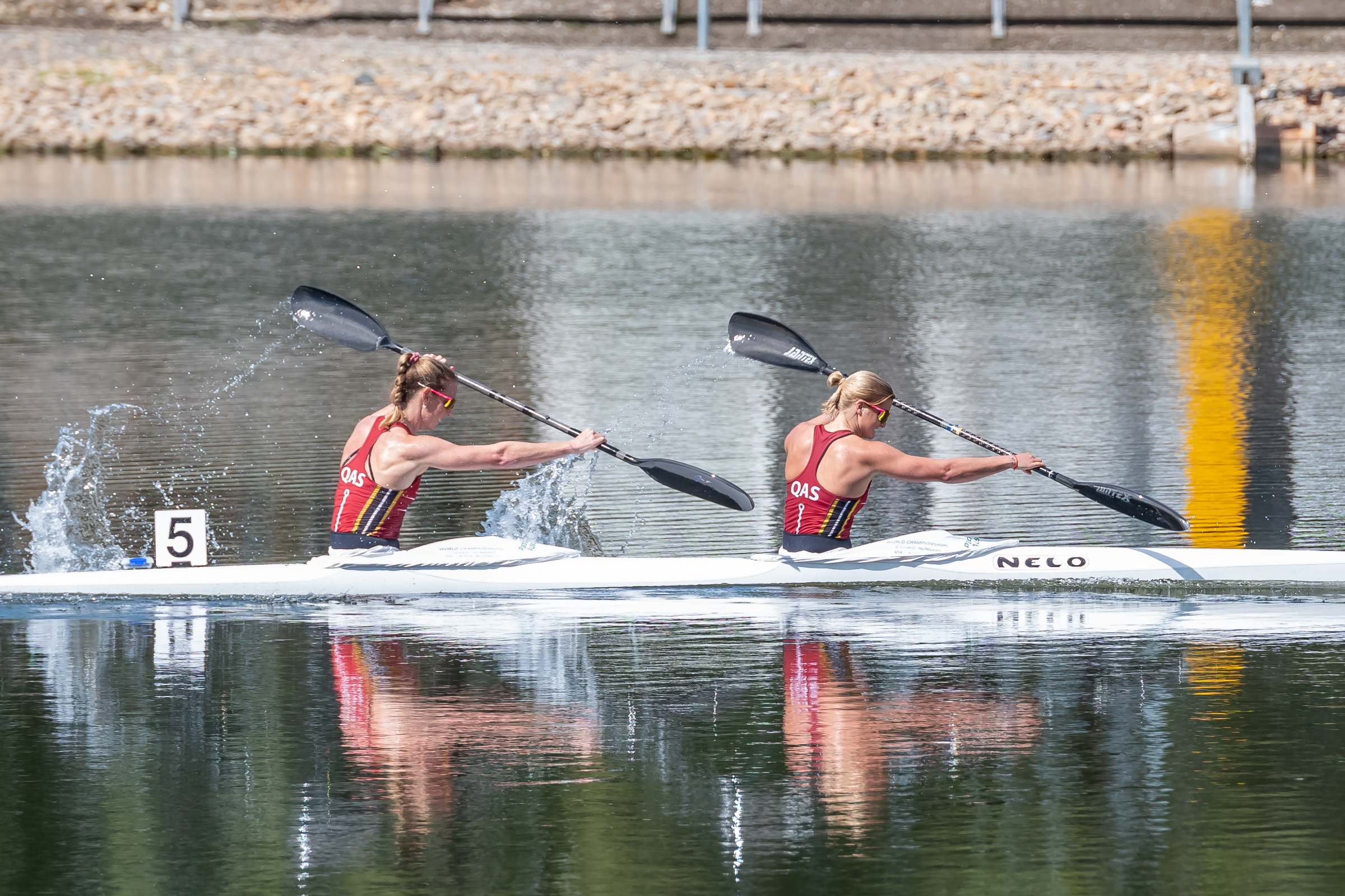 “After winning Oceania Champs we obviously had to back it up to make it best out of three and we wanted to make sure to wrap it up in that race today. We were really nervous and butterflies were definitely high when we hopped on the water this morning and it’s such a relief to tick that box and get it done. We are so stoked to have done it and be provisionally on the team,” Alyce Wood said

“I love racing in K2, it’s dead set my favorite event. I love racing and to do it with your best mate as well, there’s not better feeling. We are really happy that we’ve done it, getting in Olympic selection with two races and it is great that it doesn’t have to go to a third,” Alyssa Bull said. 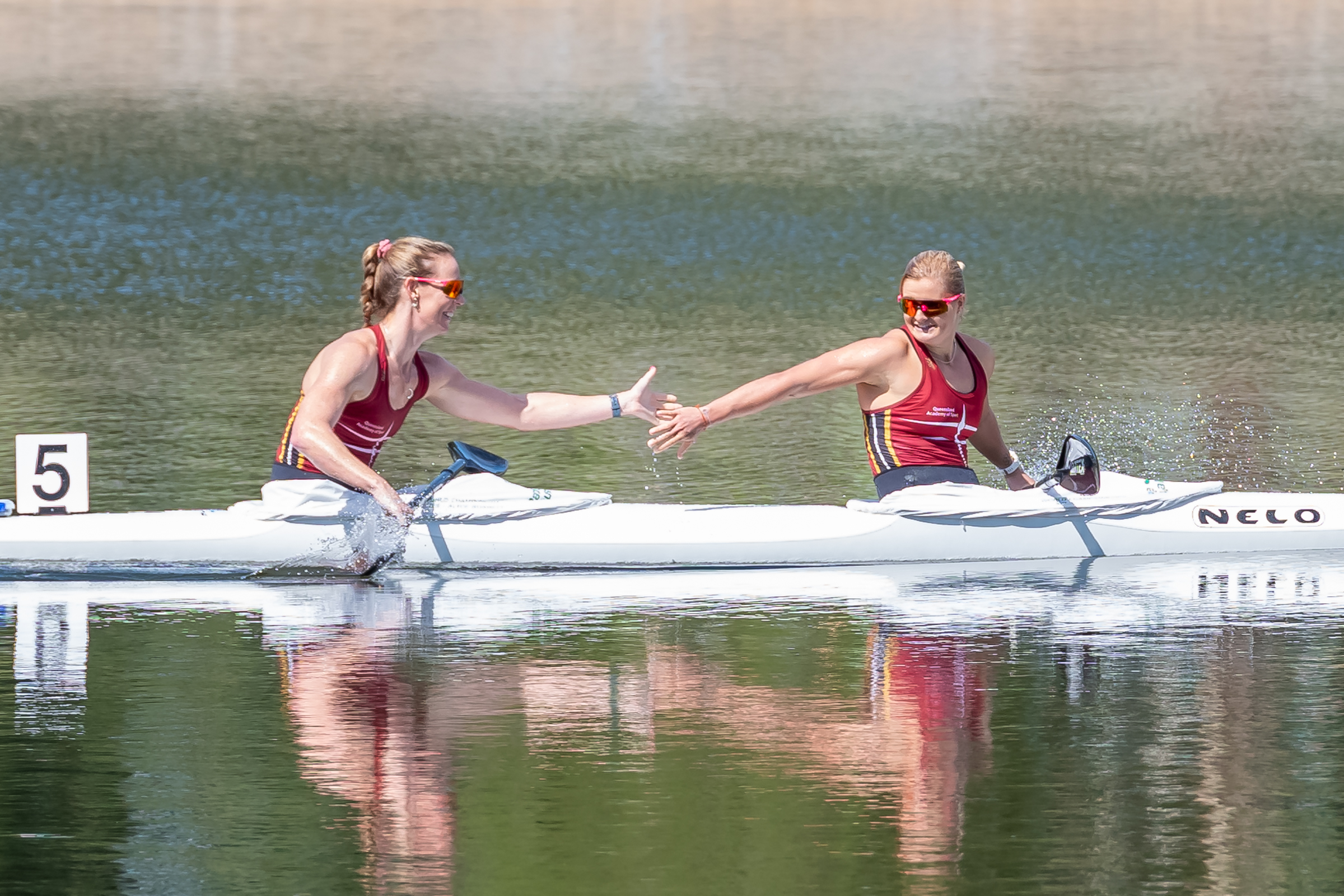 “There are quite a few crews paddling really quick out there, Jo and Jaime, Cat and Bri have been in the top end of all the finals this season as well and very close to us, so there was a lot of pressure to try and get that win today.

“To cross the line in front was a good feeling but the week is not over yet and we still have a few races to go and we also have some things we still want to achieve here, it’s the national championships so it’s straight back into the next races,” Bull added with racing to continue on Friday.

Selection racing continues for London Olympian Jo Brigden-Jones who finished a strong second day of acing with a win in the women’s K1 200, but it will be the women’s K1 500 racing from tomorrow that will be important.

“It’s been a good day two of nationals. Jaime and I finished second in the K2 which is good but we didn’t quite execute what we wanted to. It still was a pretty solid race and the K1 200 I really loved that race and came away with the win which is nice,” Brigden-Jones reflected on her racing so far.

“We have another selection race in the K1 500 with the heats for that tomorrow, semis and finals on Saturday, and a lot is based on that so obviously that is my next goal. We got few more races after that one as well, so we still got a long weekend ahead of us, but it is exciting with everyone paddling very well so it would be interesting to see the results on Saturday. 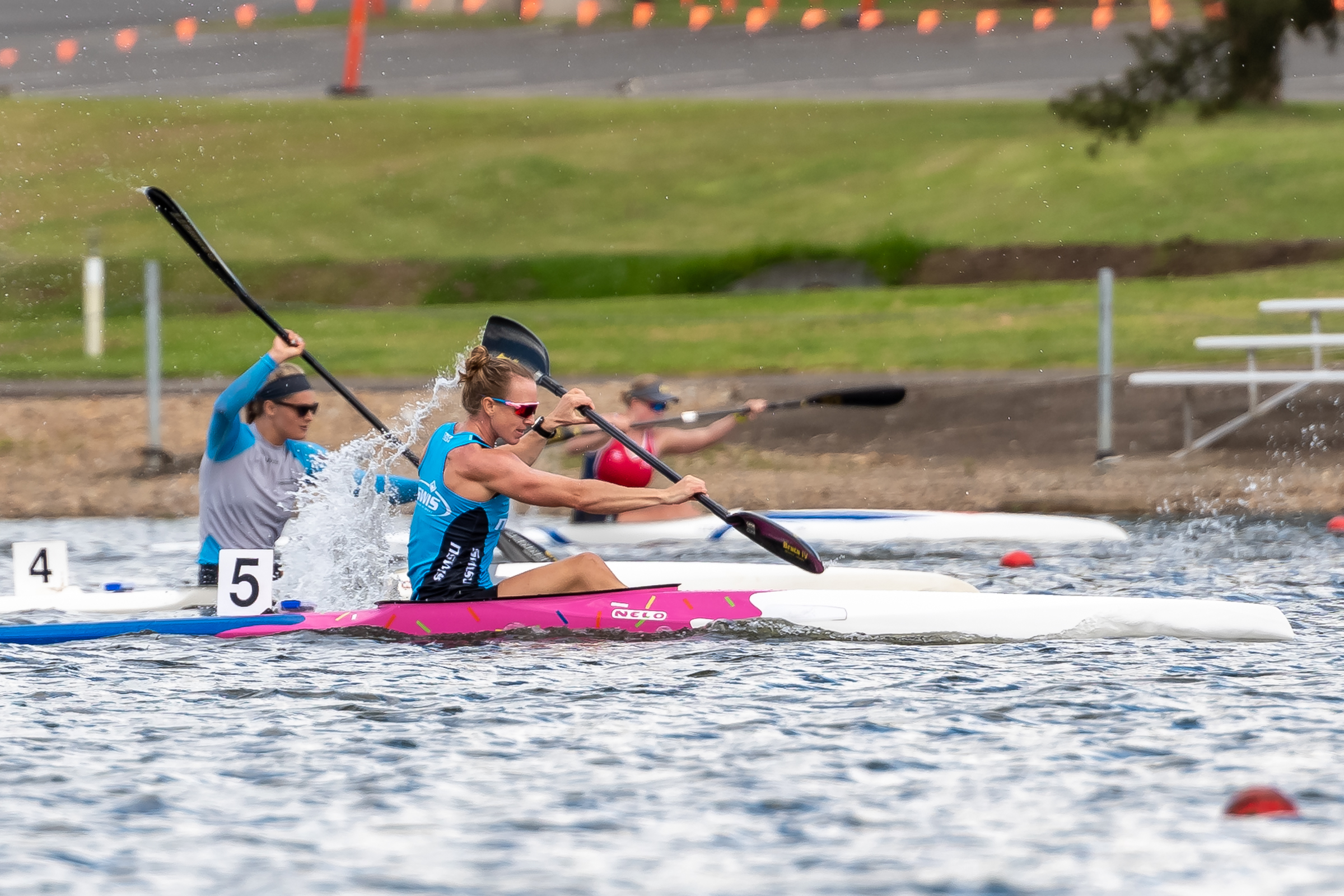 The women’s C1 was won by Josephine Bulmer (SA) after Bernadette Wallace (SA) was disqualified with an appeal pending. Aiming for Olympic selection and international performance standards the pair will have another two chances to gain selection in the women’s C2 500 tomorrow.

Paralympic Events
Already on Wednesday, Paralympic Champion Curtis McGrath and Paralympic bronze medallist Susan Seipel locked away their first two provisional spots for Tokyo 2020 in the Va’as, the outrigger canoe class that will premiere on the Paralympic program at Tokyo
2020 and did it again in the kayak events today.

The men’s paracanoe K1 200 was a internal team race-off between Paralympic Champion in the KL2 Curtis McGrath and Paralympian Dylan Littlehales, who races the KL3 class internationally, with Littlehales taking out the win over McGrath. Littlehales won in a time of 0:41.57 and +0.69 seconds ahead of McGrath.

“It was a bit the same as yesterday (in the va’as), the same sort of feeling. Obviously, Dylan was out in front of me which is nice to see and he is tracking along really well. But it’s really nice to have all the boxes ticked and we have a good team heading over and a good team provisionally selected. We are happy about everyone’s performance and looking forward for the next steps now,” McGrath said, who is a four-time world champion in the K1 (KL2 200) and a six-time world champion in the Va’as

Tokyo will be the first Paralympic Games for McGrath in two events and the chance of bringing home two gold medals. 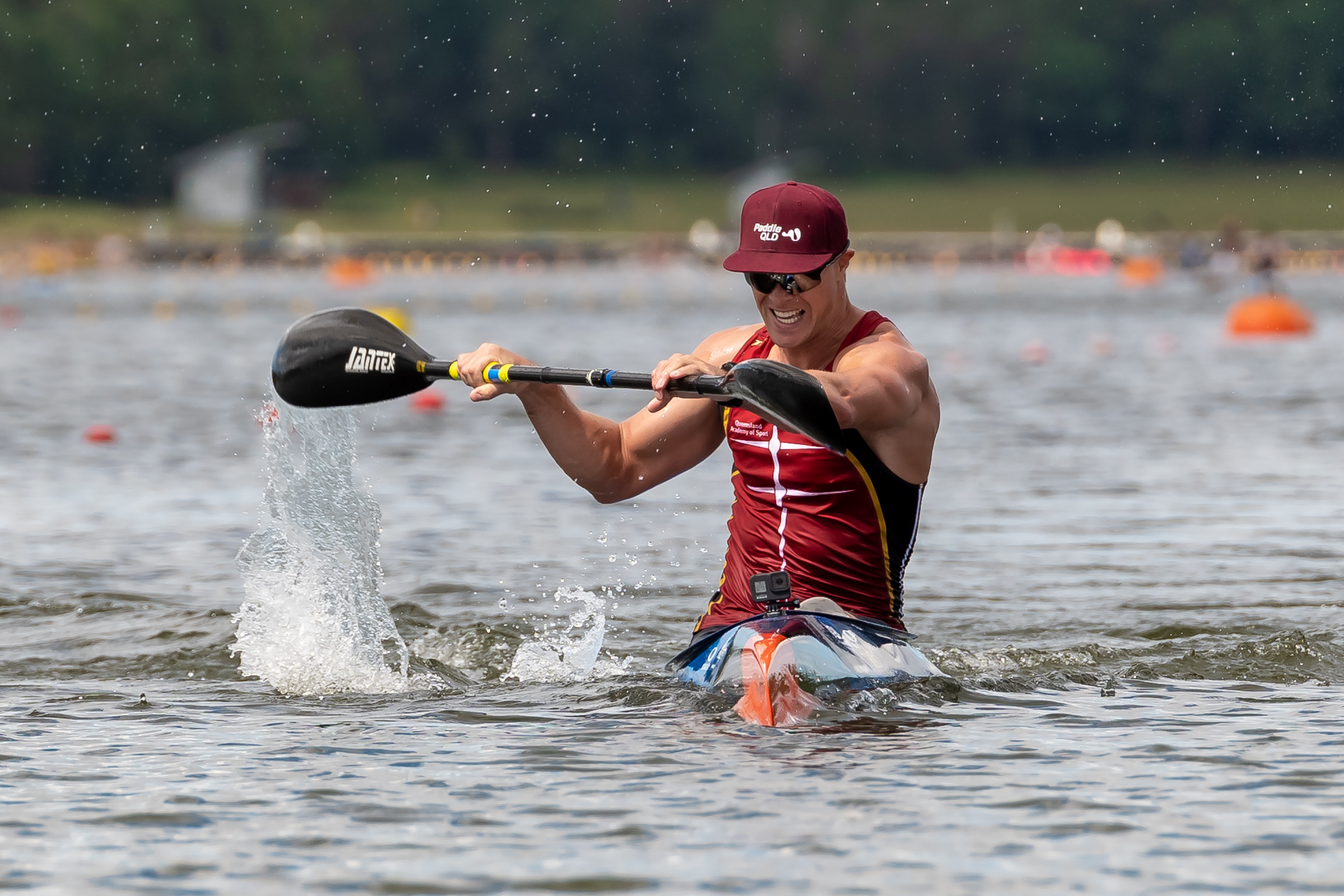 Paralympian Dylan Littlehales has shown one of the strongest improvements amongst Australia’s paracanoeists over the last four years and is looking forward to putting it all into action at his second Paralympic Games.

“I feel great, it was a good race out there, a good bunch of athletes and it’s good to know that I have got that spot secured provisionally. So it’s forward to Tokyo,” Littlehales said.

“The next goals is going to beat Serhii Yemelianov (UKR), the world champion, and hopefully I can bring home gold in Tokyo but that is still six month away so we are just going to keep working at NSWIS until then and keep the grind going,” Littlehales added confidently. 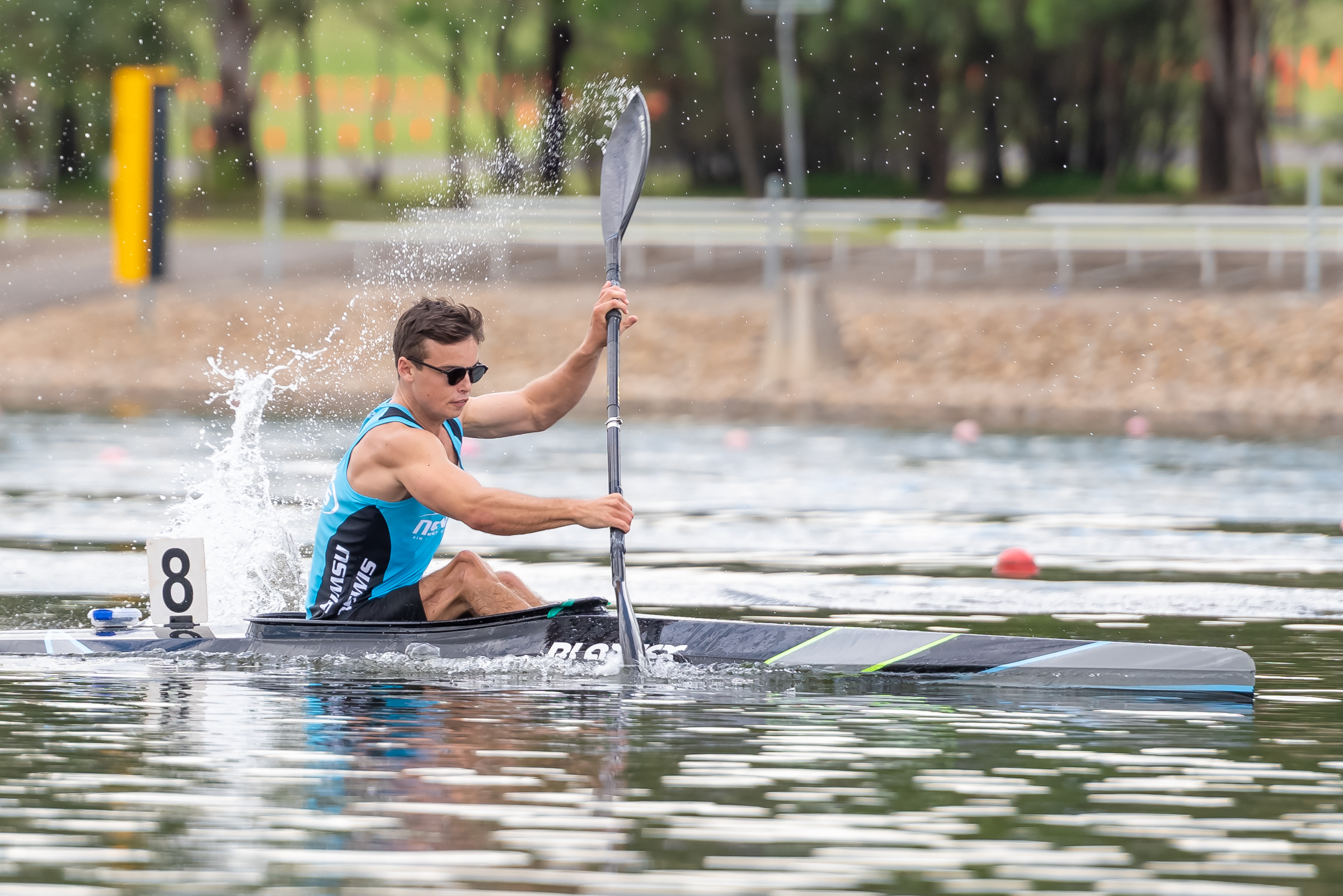 Paralympic silver medallist in the KL2 200, Amanda Reynolds, also put in a strong race in the K1 200 posting a time of 0:50.86, provisionally locking in her spot for Tokyo and her second Paralympic Games.

“I will be really excited when I get my official ticket, but I’m happy with the performance today and it’s been really good. You just got to do the best you can do and the hope was to secure my seat in the boat which I hopefully have done today. Times were a lot better than I thought they were going to be and we’ll crack open the bubbly once we get the ticket,” Amanda Reynolds said. 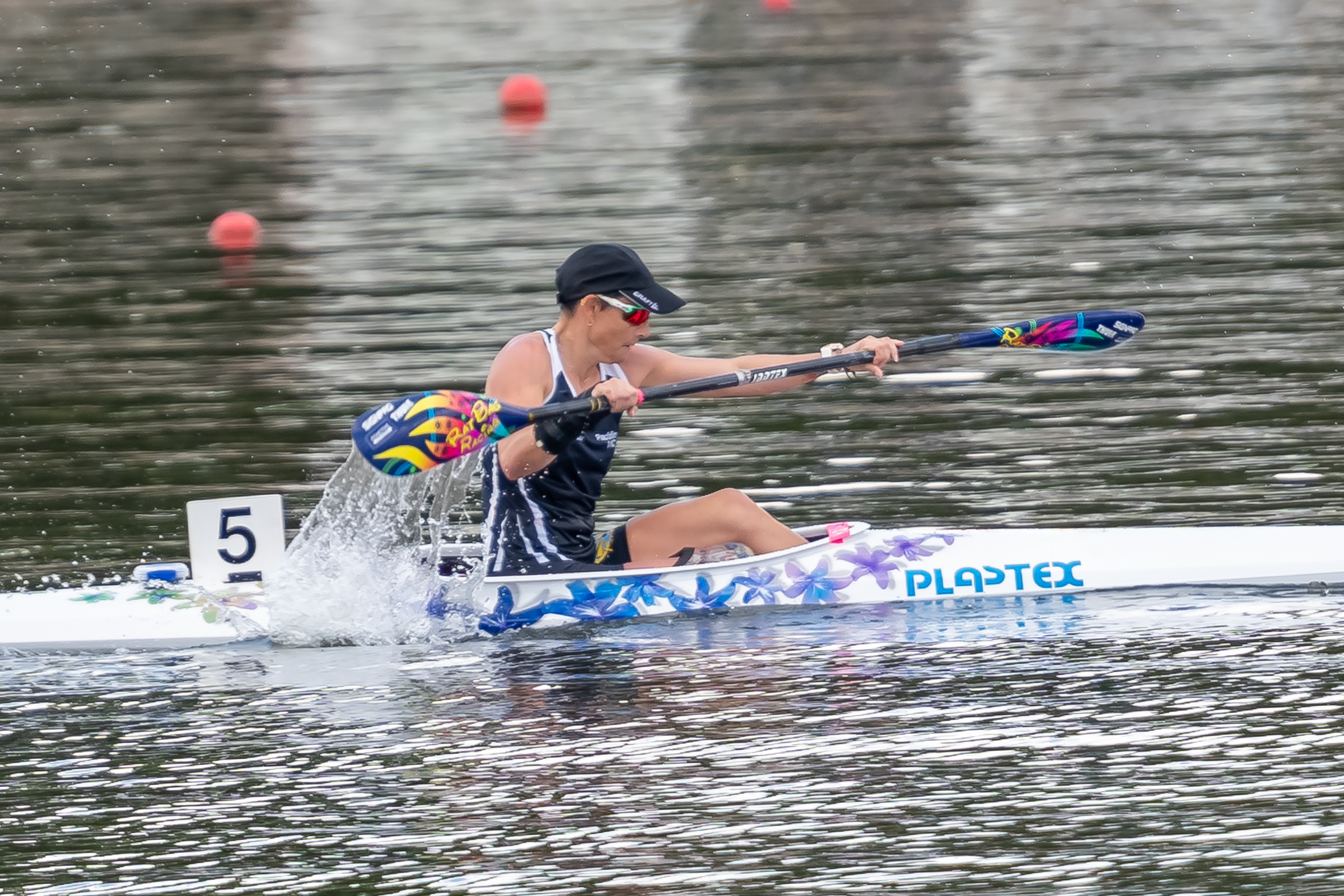 Paralympic bronze medallist Susan Seipel completes the Paddle Australia paracanoe line-up backing up her spot in va’a from yesterday in the kayak today.

“I really enjoyed my kayak race and we had bit of tail wind which is my favorite condition. I was happy overall with my race and it’s been really good to have the two selections events out the way now and just do some races for fun tomorrow,” Seipel said who will continue racing in the 500 metres events from tomorrow.

“We have a very small team and we have (2016) medal winners on our team so we kind of knew when we got the (quota) spots at the World Championships last year that those people probably, most likely get there but you never know and it’s good to be almost there and hopefully it will become official in the next few weeks and we can all celebrate then,” Seipel added with the pending formalities in mind. 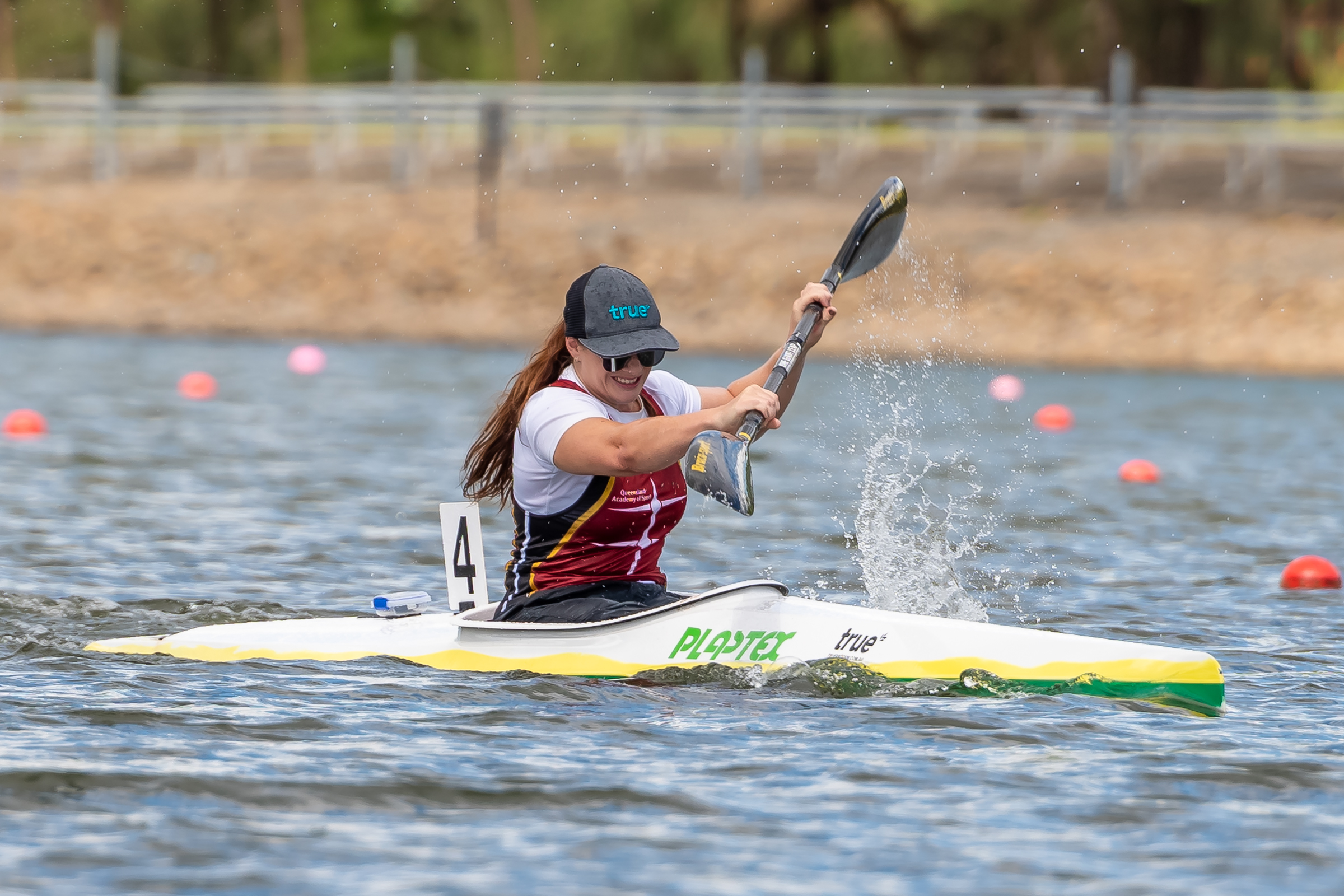 Australia secured all four Paralympic quota at last year’s ICF Canoe Sprint World Championships and following the conclusion of the Paralympic trials today, Paddle Australia will nominate athletes to Paralympics Australia for selection for Tokyo 2020 with teams expected to be finalised over the next couple of weeks.

Australia’s top Olympic paddlers are vying for the six available quota spots in both the women’s and men’s kayaking events. Two spots are available in the women’s (2) and men’s canoe events with athletes not only having to top the Australian ranks but also having to meet international performance standards. In the paracanoe events, four quota spots are available with athlete able to double up at the Games.