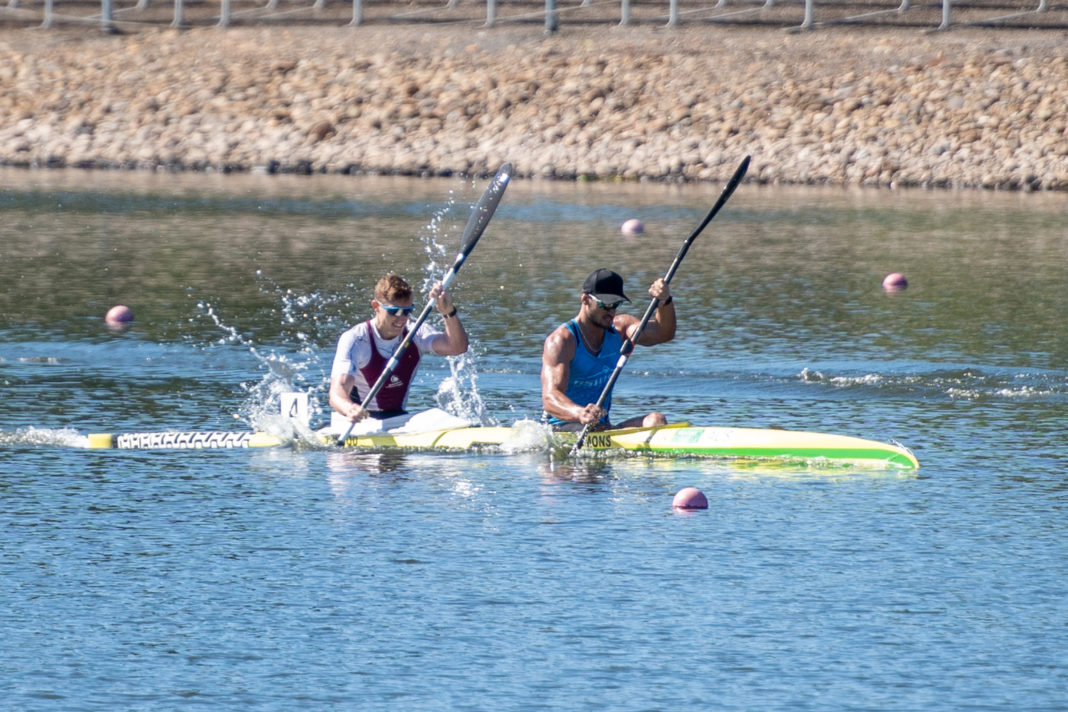 As temperatures were on the rise at Sydney International Regatta Centre, so was the race intensity with national titles as well as Olympic and national team selection racing heating up on day 3 of the 2020 Paddle Australia Canoe Sprint Championships (11-15 March 2020). 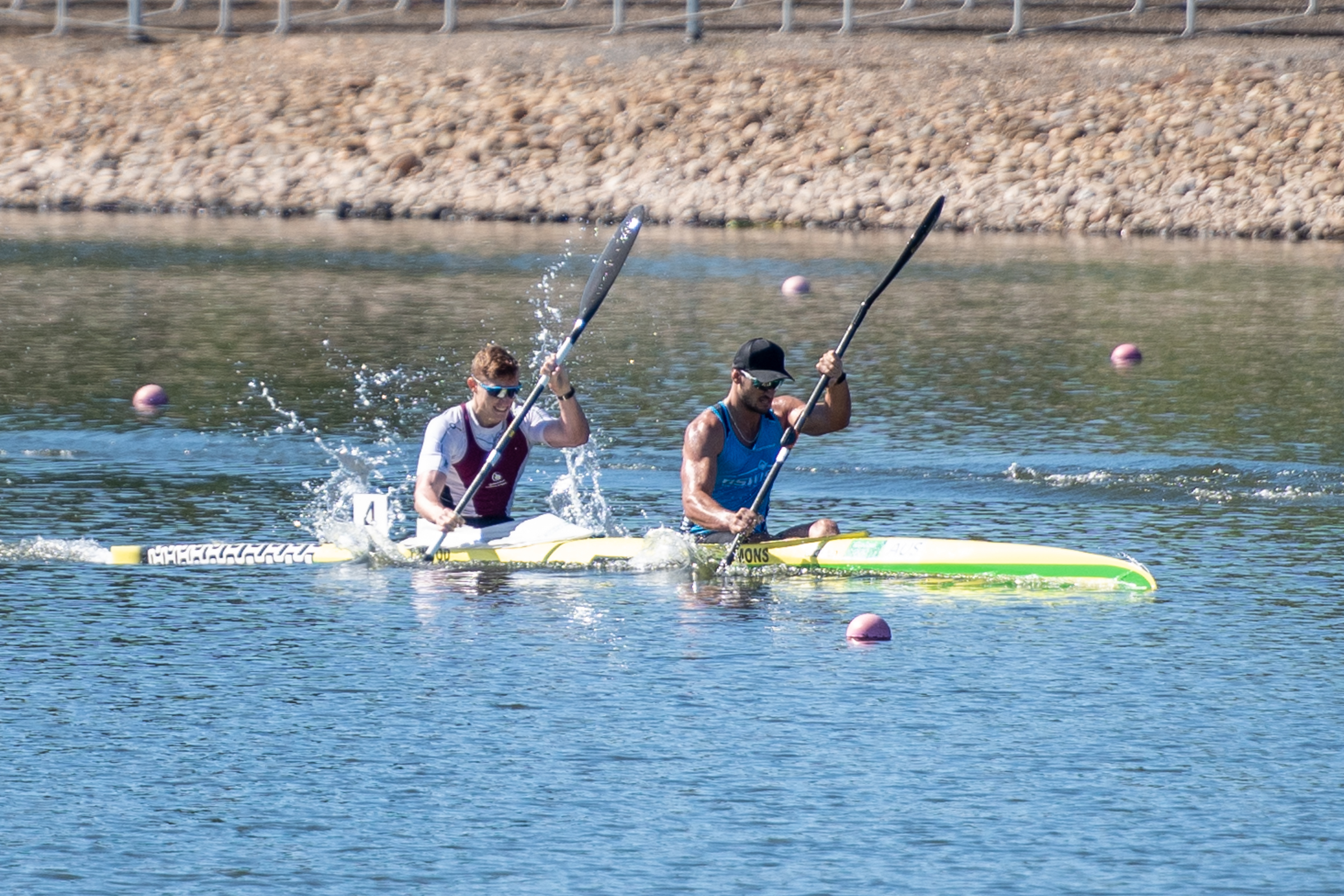 With Green and van der Westhuyzen winning the first round of selection trials in the MK2 1000 at Oceania Champs – Canoe Sprint GP2 a few weeks ago (14-16 February) and Fitzsimmons and Wood coming third, this was the opportunity to reserve it.

“I think we had a bit of extra incentive. We didn’t put our last races together like we wanted to and over the last couple of weeks went back to the drawing board and really started working on the basics again. We knew we had the ability to execute a really good race and there were only a couple little things that were missing at GP2 and I feel we really got it together which is great,” Jordan Wood said. 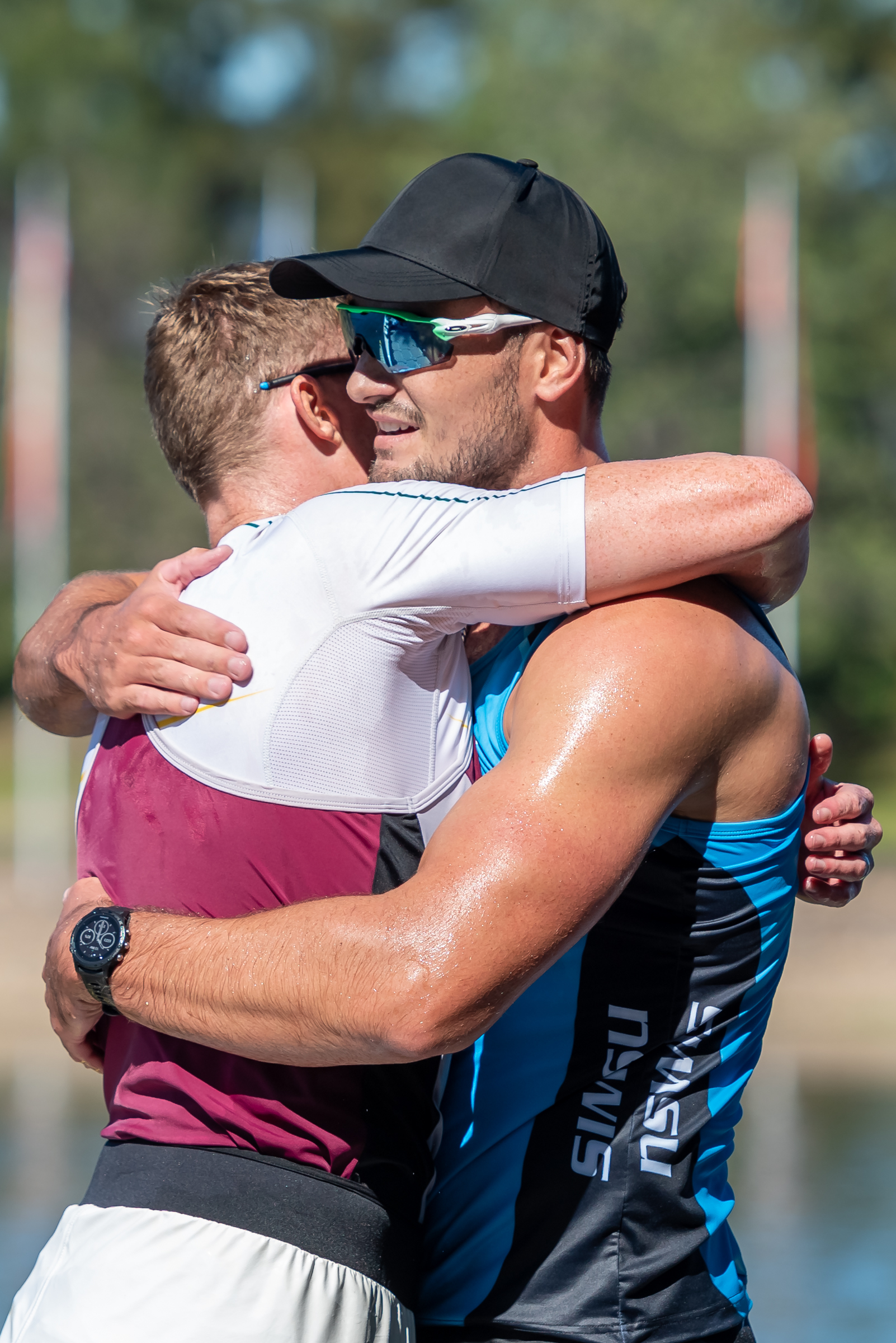 “I’m over the moon really. We haven’t had the greatest domestic season. We started off well and then the last few races were a bit up and down. So to come back and find that form again is really something and to put a race together like that is great. Tom and Jean have been pushing us all year, same with Lachie and Murray and the pressure really has been on. It’s great to bounce back and get ourselves back on to that top step of the podium domestically,” Riley Fitzsimmons added.

It was the fourth national title for the pair who also won Open men K2 1000 national title over the last three years. With the event the final round of selections, the win had more relevant than just winning the national title though.

“In regards to selections, it’s nothing but positive for us. We really wanted to come here and execute a really good race and show what we are able to do. We are the top five crew in the world and even better than that. Jean and Tom have really outperformed us all year, we came in and tried to equal them.”

“Australia has that possibility of racing two K2s at the Olympics so it’s a great chance for us and a great opportunity to have two boats at the Olympics and who knows what the future will hold for us. To make that second Olympics together would be amazing and we would love to go back there and get that experience again,” Fitzsimmons added about selections on the horizon

Final selection rankings in the men’s K2 1000 will be decided in a race off on Sunday. 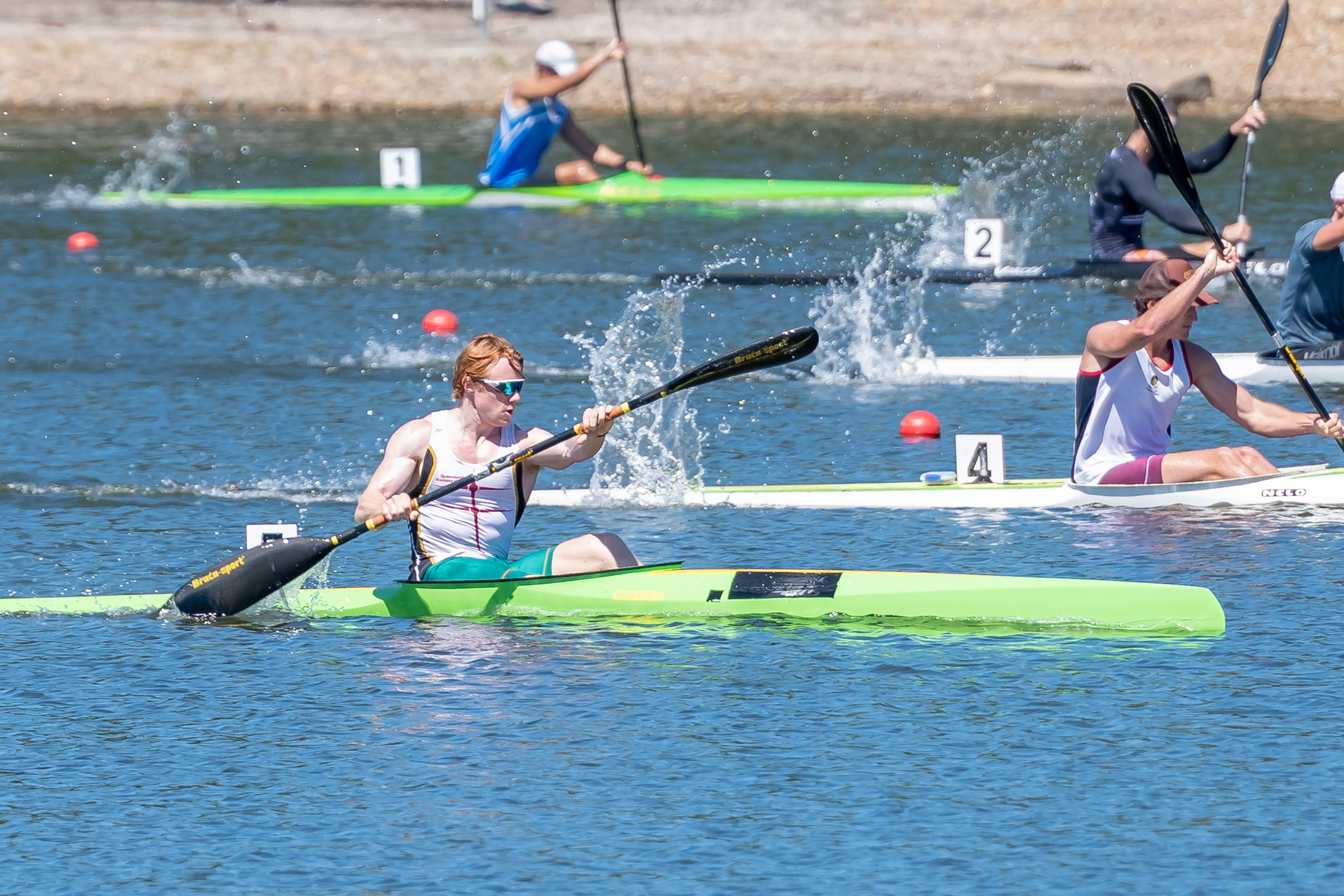 Olympic Events – Women
The women also raced the K1 500 on Friday with Rio Olympians Alyce Wood (QLD) and Alyssa Bull (QLD) backing up their strong performance from Thursday in the women’s K2 500 from when they won the national title in the class and provisionally locked in their spot for the Tokyo 2020 Olympic Games in the process.

On Friday, they also won their respective heats in the women’s K1 500 with London Olympian Jo Brigden-Jones (NSW) winning heat 3 and South Australian Cat McArthur taking home the win in heat 4 with finals on the schedule for Saturday. 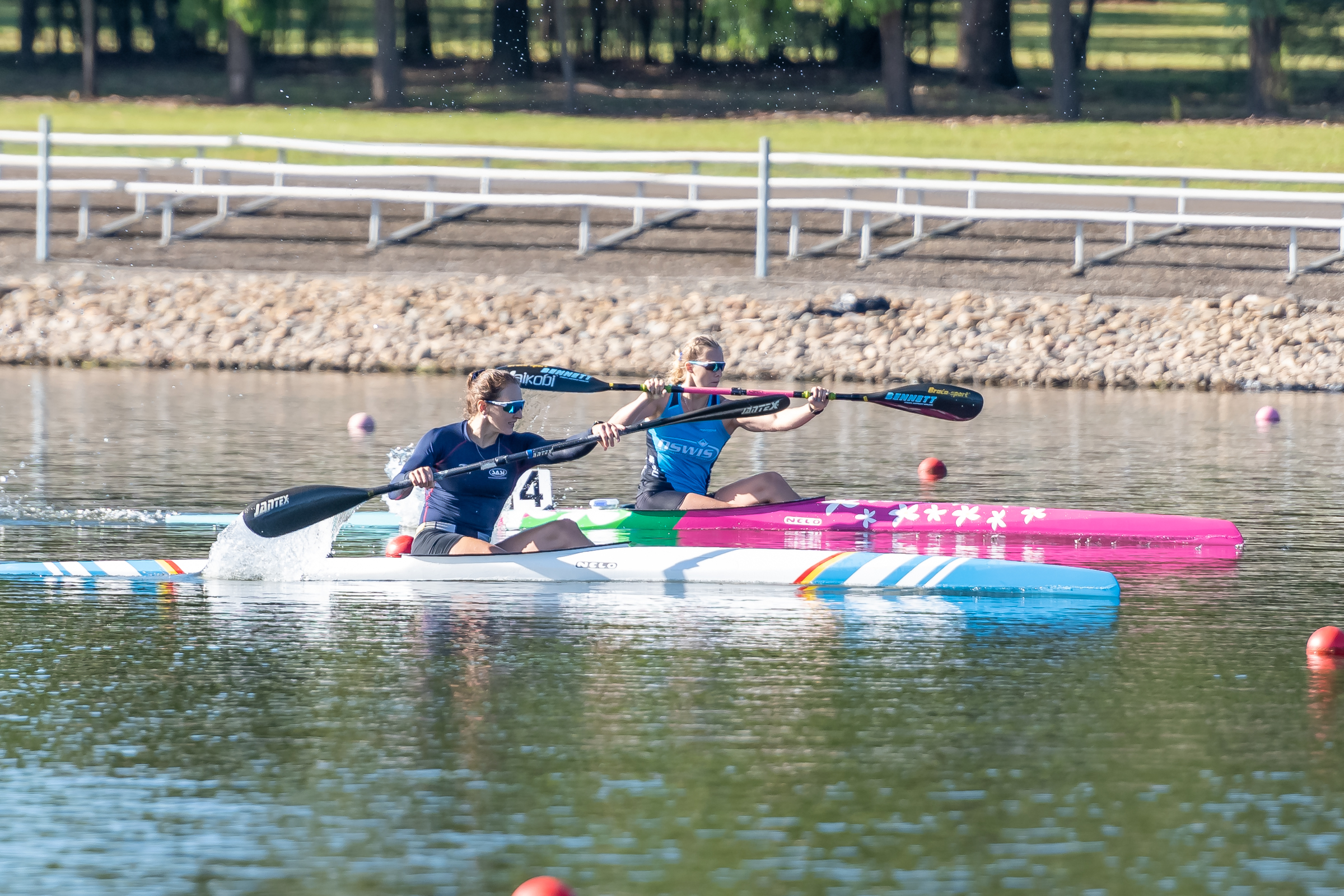 In the women’s canoeing events, it was all about the International Performance Standard times this week with South Australians Josephine Bulmer and Bernadette Wallace putting in a strong women’s C2 500 final in a winning time of 2:03.21.

“We had a really, really great race, that is our fastest domestic time that we got and stoked with how we pulled it out together and backed it up with two seconds difference from our seeding race to the finals, so I’m pretty happy with that,” an excited Josephine Bulmer said.

A lot was at stake for the pair, but they managed to keep it all under control. 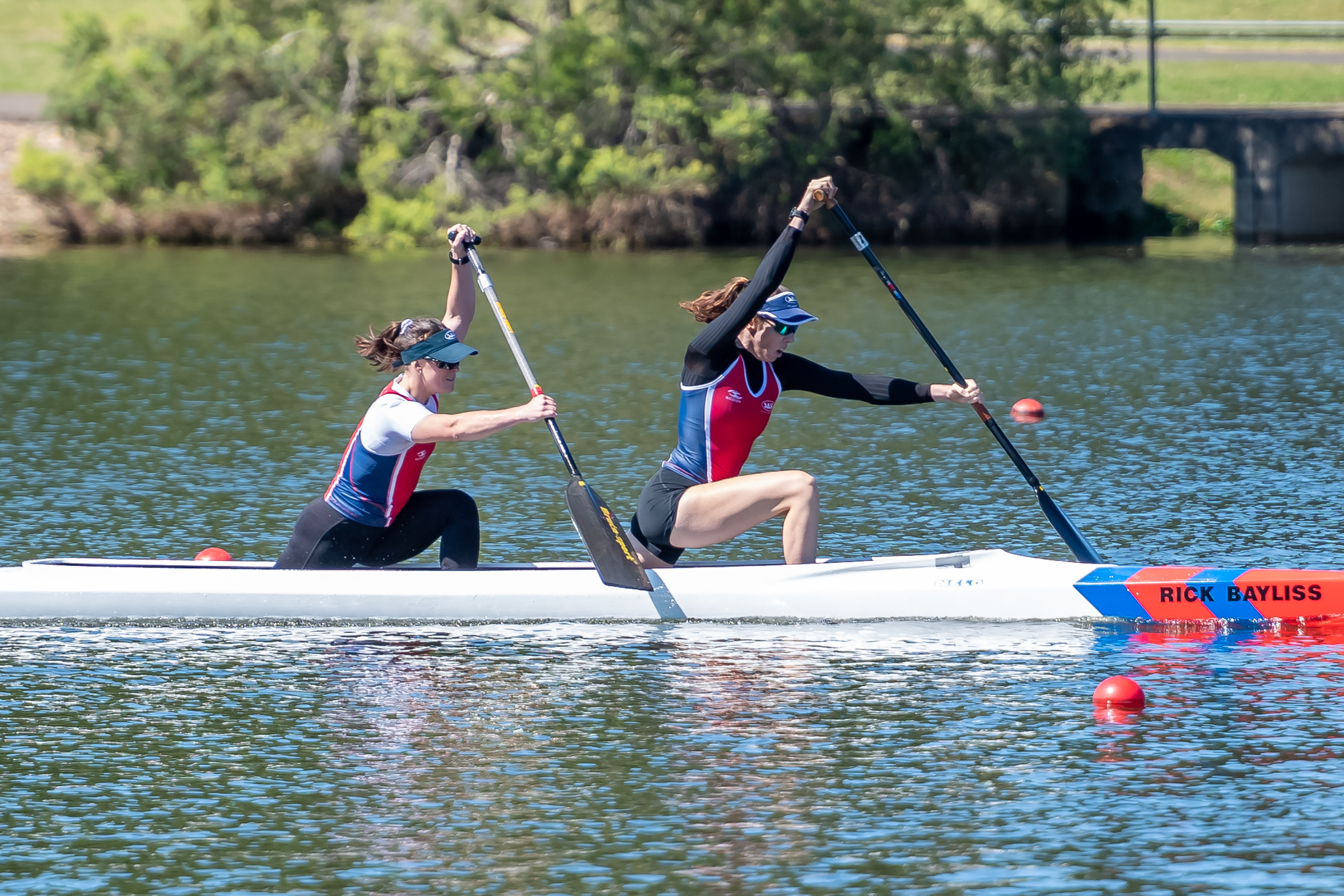 “Our nerves were out of control but we tried to stay within our control, but there was definitely some shaking on the start line,” Bulmer laughed.

“We’ve really had a whole team behind us, our peers, coach, squad, staff and everyone and it has been a really, really up lifting time and this journey has been awesome so far. We have done everything we could up until this point and I guess now it is in selector’s hands and we are just going to hope we did the best we could and I am happy with what we’ve done,” Bulmer added in regards to selections. 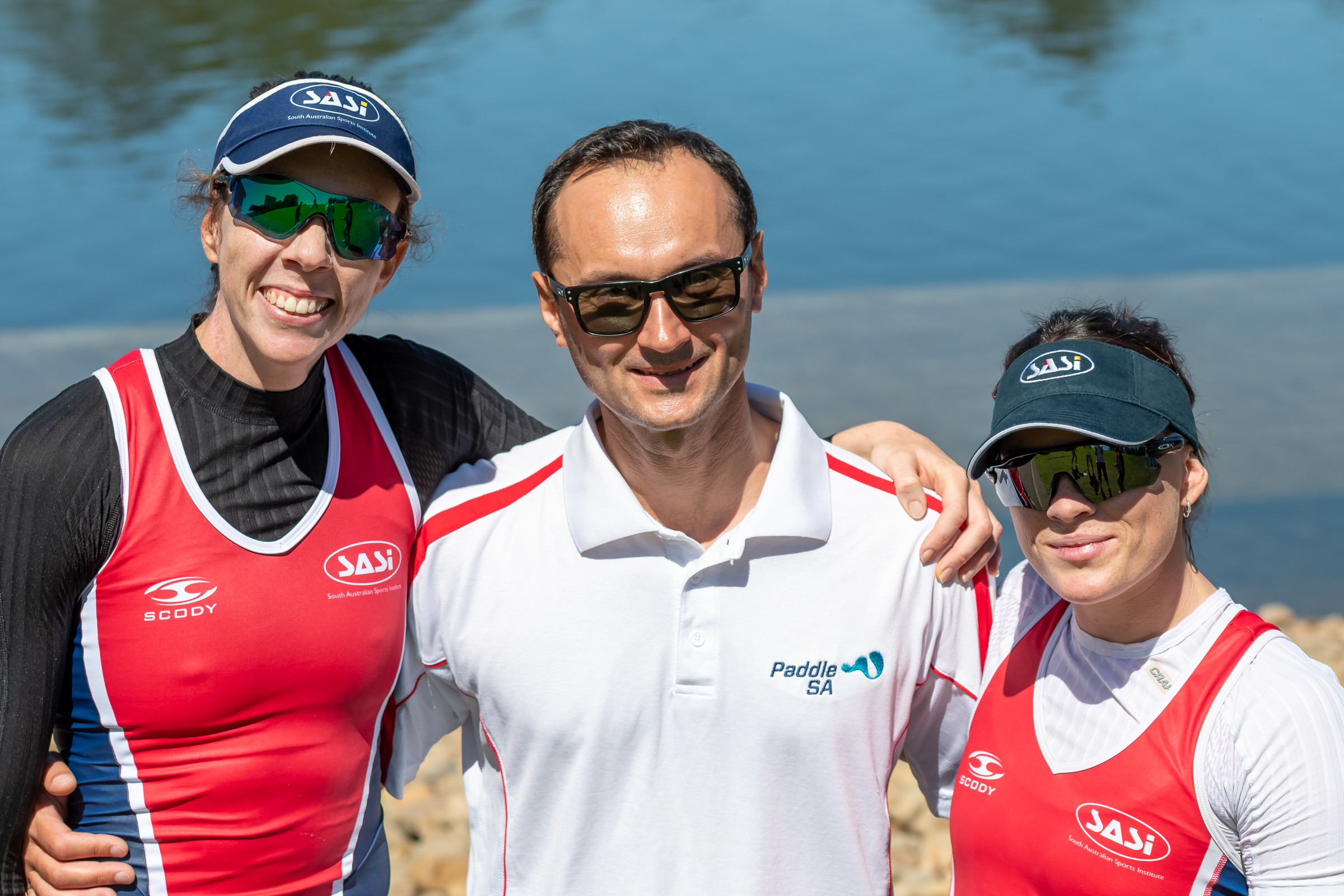 “That was the plan to come and try to take out both selection races and yesterday was a flyer and I was very happy. It was fast, but I didn’t know I was that fast and it was a really exciting race for me and a very, very hard race as well. I am just happy I could execute what I knew I could do and what I’ve been doing in training. I’m very excited about it all. It has been such a great week and the C2 with Josie and everything has been going to plan, so we are feeling really positive,” Wallace said. 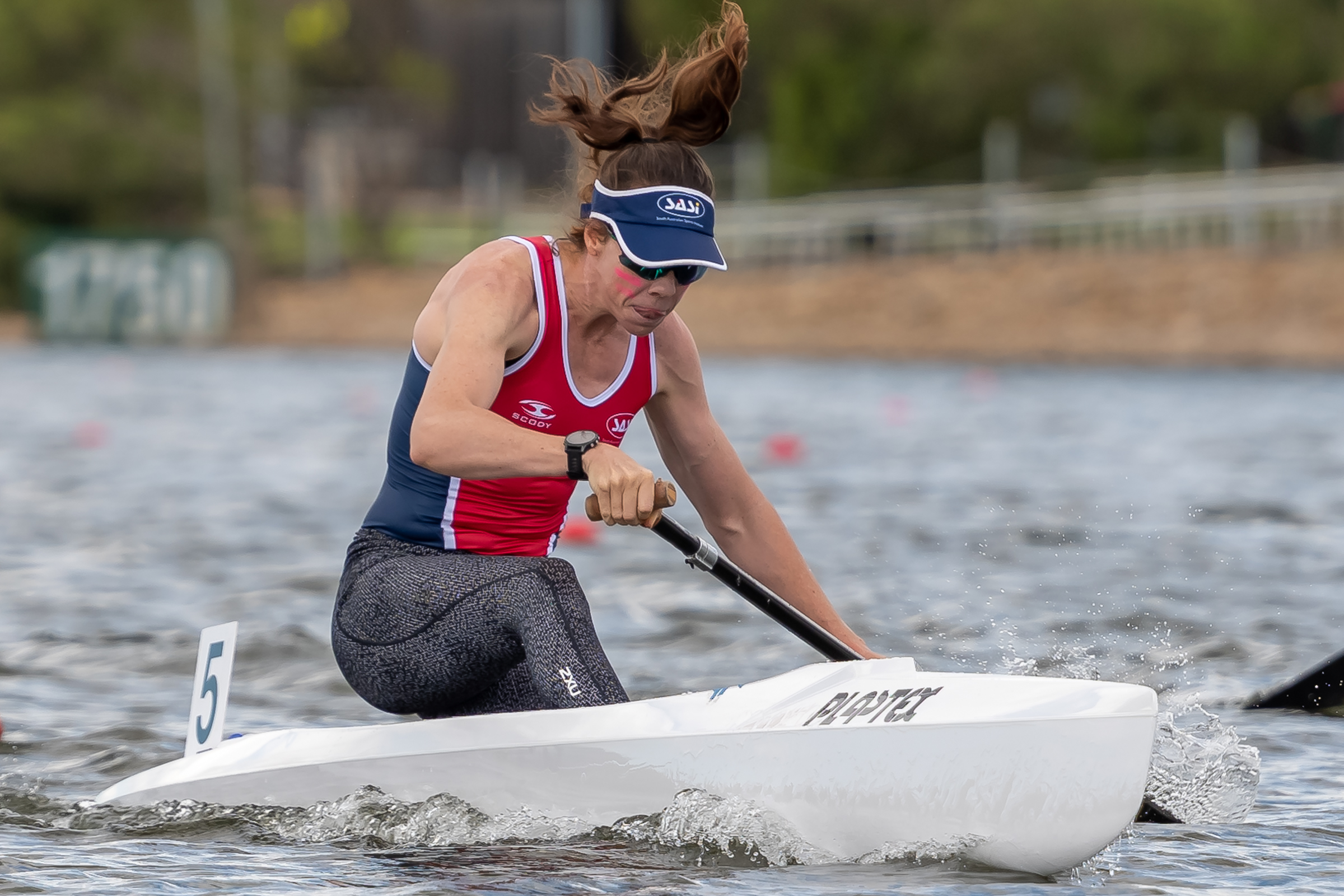 Putting in a strong time was the extra push needed for today’s C2 with selection decisions expected over the coming days.

“Today I just needed Josie’s legs there. She’s amazingly powerful and strong and I needed my little jetpack Josie in the back to push me over the 500 metres. It was the best that we could do and we had to be crazy enough to think a couple of years ago that we could achieve this and we had to remain crazy and stick to the plan no matter what’s happened. This was 0.68 seconds off and to be that close I hope they (selectors) will have a look at what we’ve done and what we’ve gone through to be that close to a ticket,” Wallace said.

The women’s canoe events premier on the Tokyo 2020 program and Wallace and Bulmer have come a long way since they started paddling together at the South Australia Sports Institute at the end of 2018.

Other Events
The 2020 Paddle Australia Canoe Sprint Championships also double up as the selection event for U23, Junior, Asia Pacific and Olympic Hopes team and Paddle Australia’s up and coming paddle talent put in another strong day on Friday.

In the under 18 women’s events, Western Australian Hariette Alexis impressed with her first national K1 title and a PB in the K1 200. 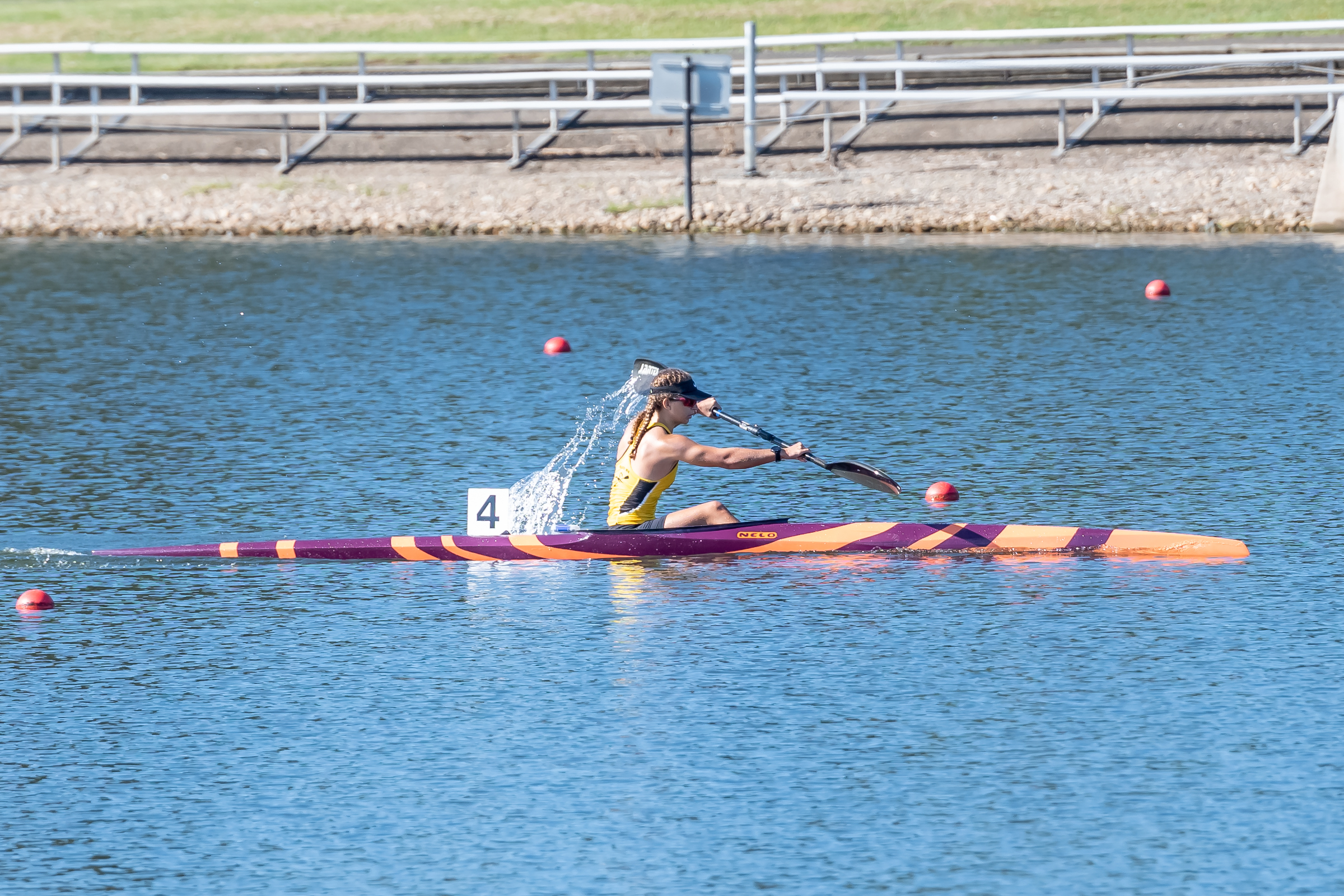 “I was hoping I would go well but didn’t expect this and was just giving it my best shot and see how it turned out. This is my first national title by myself and winning this I hope to be going to the Junior Worlds which was my biggest aim this year so I’m really happy with that and very excited as this would be my first team ever,” Alexis said.

And about the regatta overall she added, “It’s been really exciting to see how everyone else has been going, especially from my state as I train with them every day and it’s really good to see how your friends are going. And it’s really good to see who is winning in the Olympic events because I look up to them so much and they are all my inspiration.”

Alexis has had a strong regatta so far, coming third in the K1 500 and also won the K2 200 together with her club mate Elanor Disselkoem.

Jasmine Locke (NSW) and Chaise Richardson (QLD) ended a successful day of racing with a win in the women’s K2 1000, with Locke one of the under-18 stand-out paddlers at the event, who also won the K1 500.

“We knew we had the legs and the fitness to be able to pull through with the win. It’s been a pretty good regatta for me so far. I won the K1 500 which was really nice and I can’t wait to see how we go in the K2 500 tomorrow,” Jasmin Locke said, who only came across to sprint kayaking from surf paddling 16 months ago. 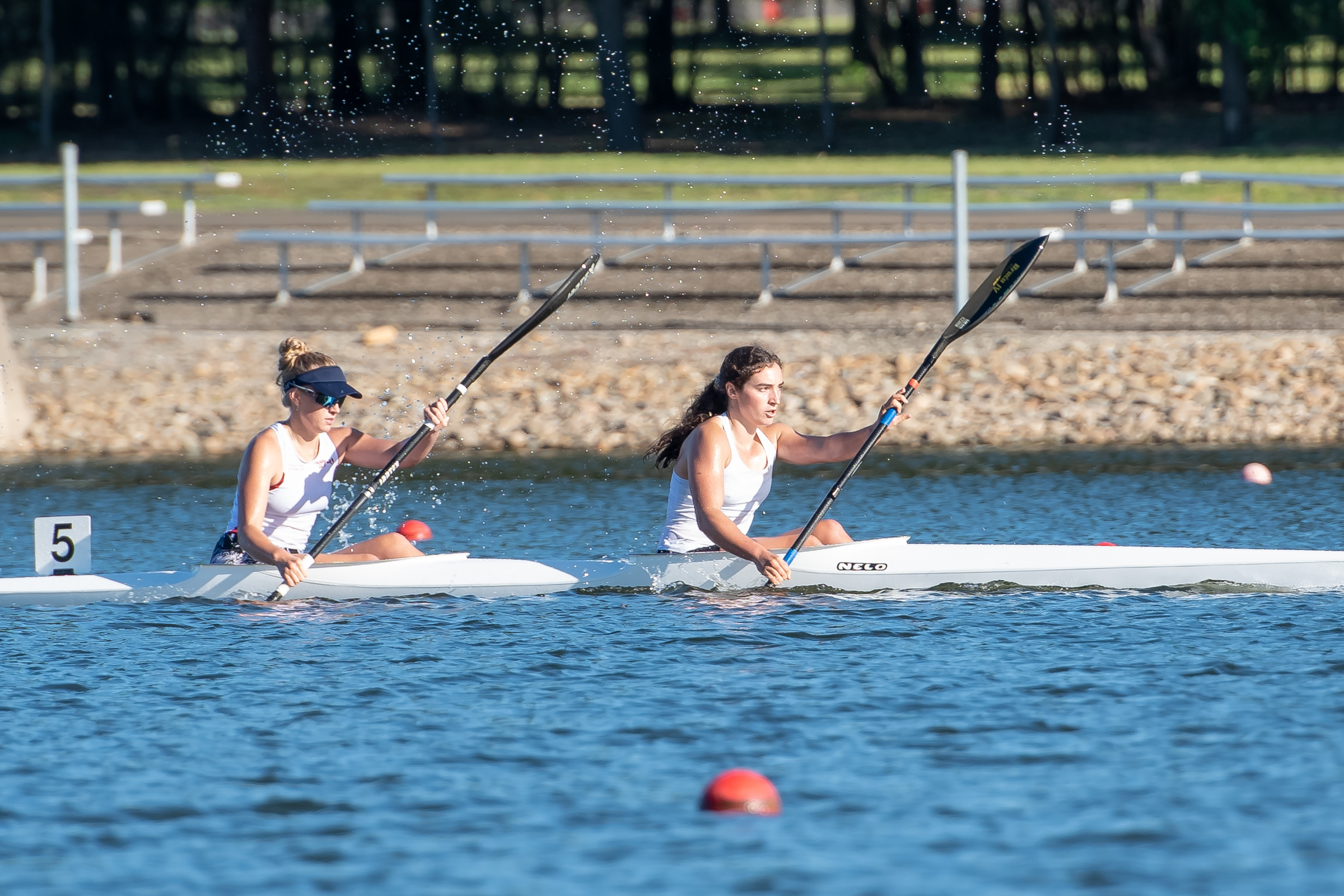 “I am so happy with this. It was a tough race and the boys made it hard to come through but I am so happy to take it out. We have won all the K2s (with Jarrah Sheppard) so far, the 500, 1000 and 200 and we also won the K4 200. You can’t take anything for granted in races like this but boys make it so though and I’m so grateful to come away with the wins,” Armstrong said.

In the under 18 events, Avoca Kayak Club paddler Fletcher Armstrong added another win in the men’s K1 1000 after already winning several other of the junior events. 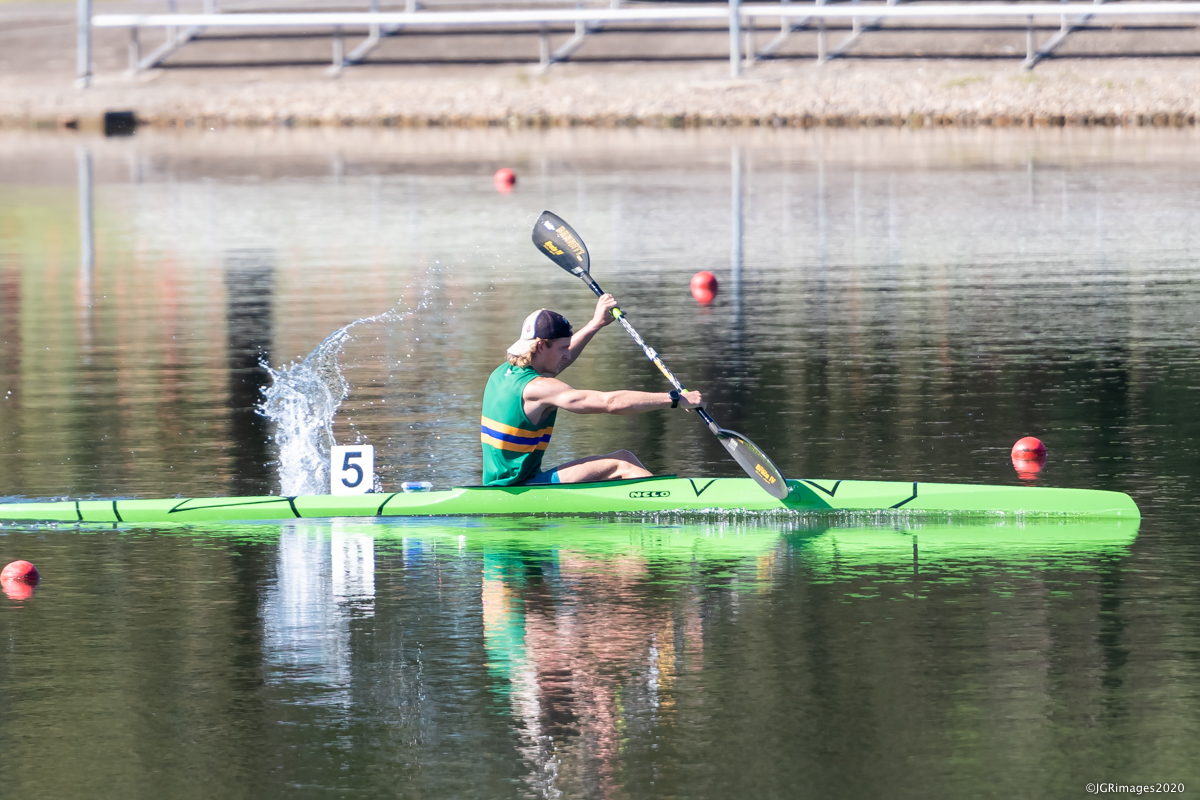 Racing continues at SIRC on Saturday, 14 March 2020 and will conclude on Sunday, 15 March 2020 including the interstate events.