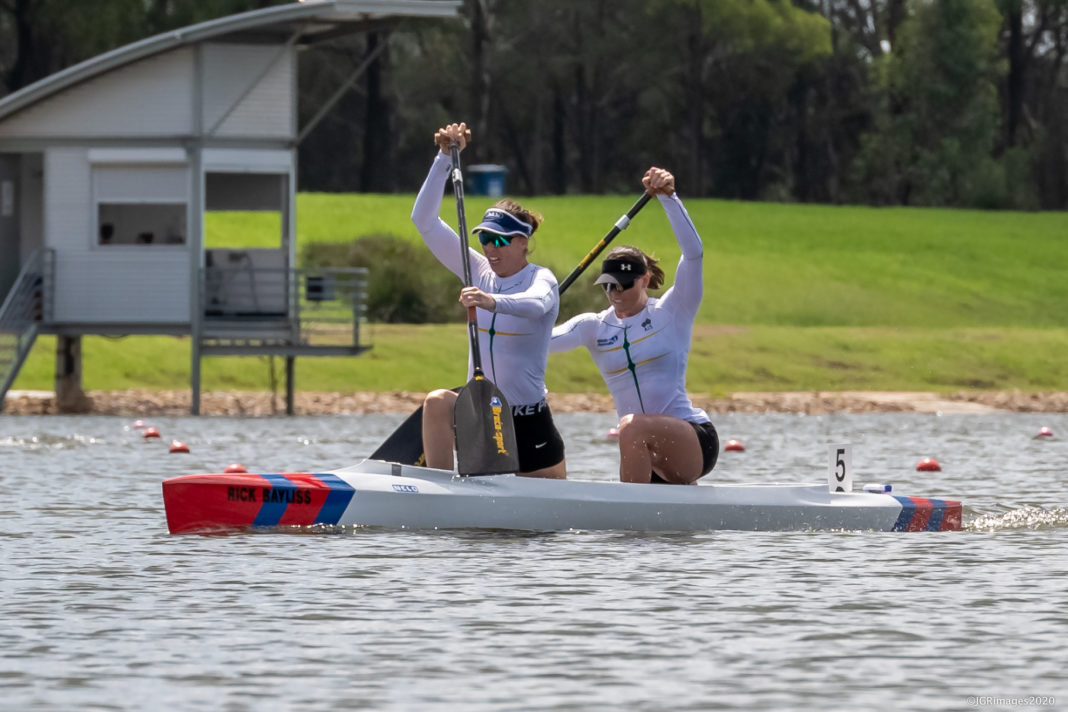 With an additional two quota spots in the women’s kayaking and women’s canoeing events, plus one quota spot in the men’s canoe events. Australia has provisionally secured the maximum quota it was aiming for. 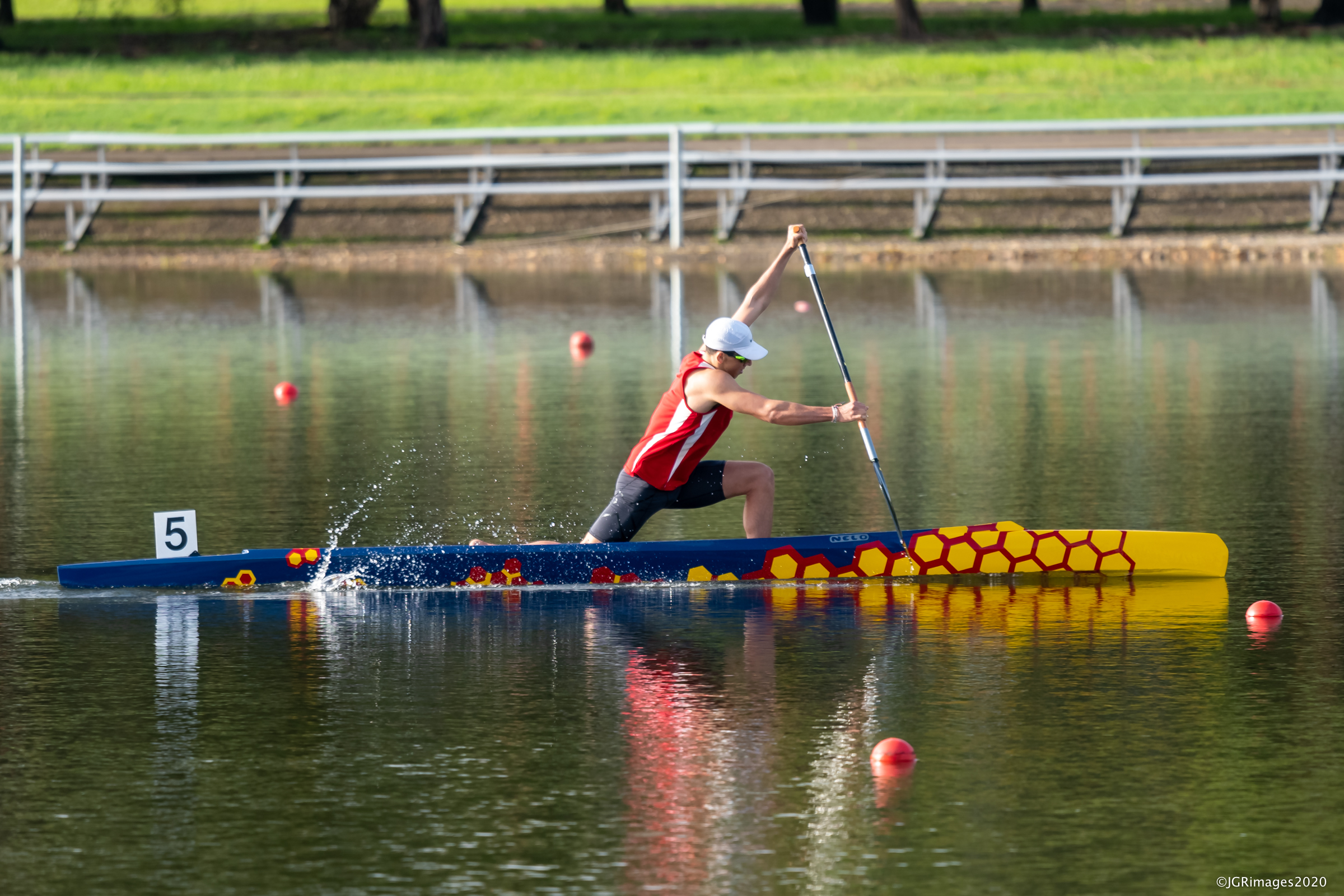 Benjamin Manning (QLD) kicked off the day taking home the win in the men’s C1 1000 heat and securing the Oceania quota spot ahead of Samoa and Cook Island in the process.

“We are really stoked to get another two spots for Australia and to be a part of it. It’s not any names on seats yet but it is exciting to be contributing to the bigger picture, which is really quite heartwarming,” an excited McArthur said.

“This was a bit of a redemption race for us after we didn’t have the race we wanted (to) at worlds last year and and we got to prove that we are deserving as senior paddlers. We proved that we can do this for Australia, for our country,” Brianna Massie added.

The women’s kayak team has now secured the maximum quota of six spots with athletes to fill these spots yet to be decided at this weekend’s GP2 as well as the Canoe Sprint Nationals following in March. 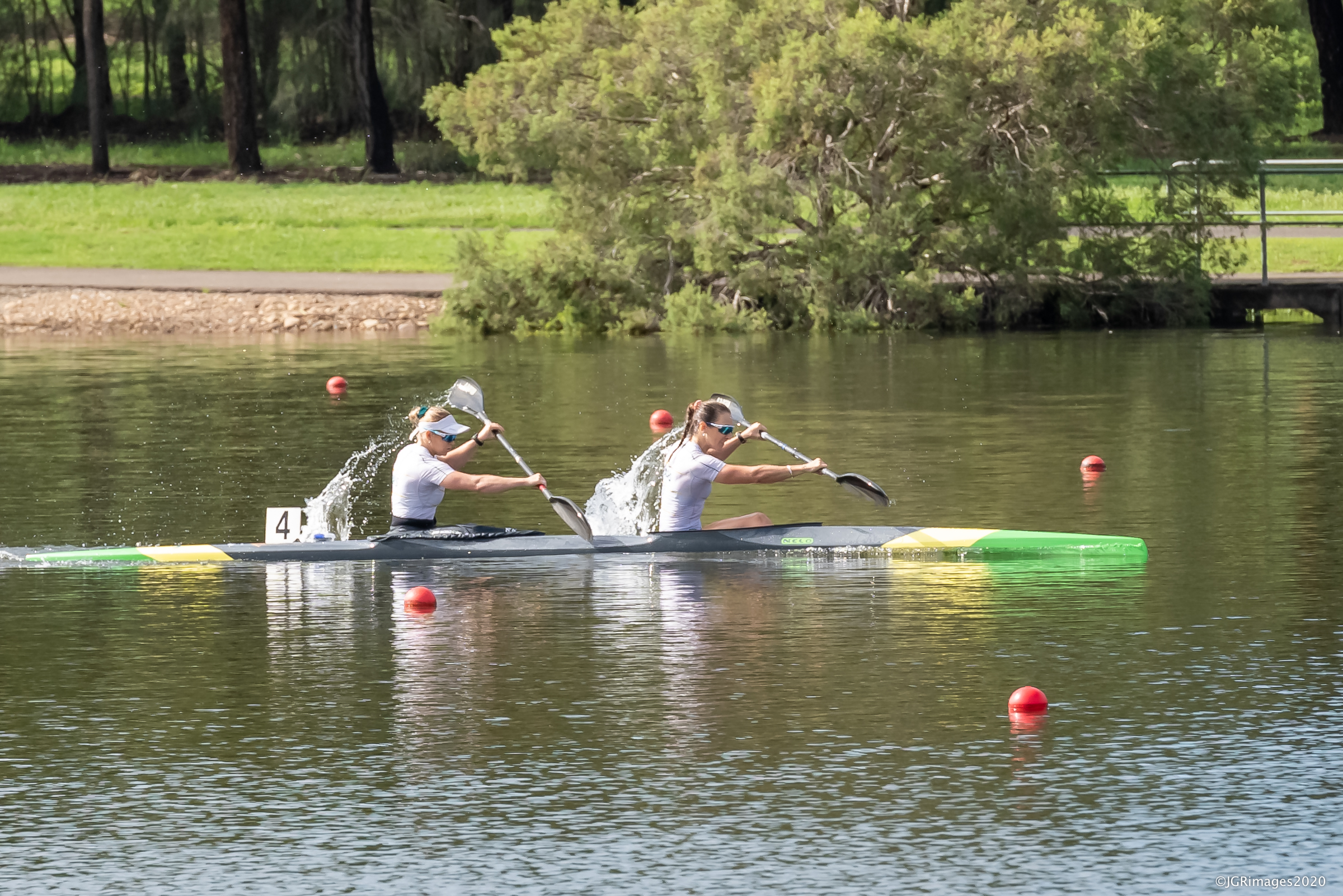 “This is the first step, we have ticked that box and now we are just completely focused on filling those six spots which will be decided in about a month time,” McArthur explained.

It is the first time since the London 2012 Olympic Games that Australia has secured the maximum quota spots in the women’s kayaking events.

“We only had three spots in Rio (2016), so it’s a really great step for Australia and it shows the depth that has come through over these years and it’s just great to be part of this,” Massie said.

Women’s canoe paddlers Bernadette Wallace and Josephine Bulmer wrapped up a successful day of Olympic qualifying for Australia and secured the women’s C2 quota after winning their C2 500 race.

Securing the first ever women’s canoe quota for Australia, the South Australian Sports Institute paddlers wrote sporting history, with women’s canoeing to premier on the Olympic Program at Tokyo 2020.

“It’s pretty exciting and my brain is still a bit scrabbled at the moment but it’s great and I was happy to be out there with Bernie. Nerves were pretty high and it was nice to have Bernie as support and I couldn’t ask for a better team mate. We both tried to forget about what was at stake and just do what we needed to do and executed a good race,” an emotional Josephine Bulmer said.

“Yes, we are definitely really happy to get this done. We’ve been looking forward to this race, and I guess visualising that race as well as making plans into the future towards August (Olympics). This was part of the plan and we needed to do that and do it in a good way. I’m really happy with our race and that we executed it as well as we did,” Wallace said.

Part of that plan was getting the quota, we needed to do that and to do it in a good way and execute it well is great,” a relieved Wallace said.

“We’ve been training so hard to be in this place in February, because it is so far away from August, so we are trying get our bodies into a sprinting nick right now. For me personally, it was a matter of just focus on a stroke by stroke approach, focus on what I’m doing and handling my body in the condition that it is right now and just being really strict on technique and the fundamental basics on moving a boat forward. It’s an honour and a huge responsibility to secure Australia a quota, but thinking about that wouldn’t make you fast on the start line,” Wallace added.

While the pair has ticked the first box of securing Australia the quota spot, it will still come down to meeting international performance standards across the two selection events in order to get selected. 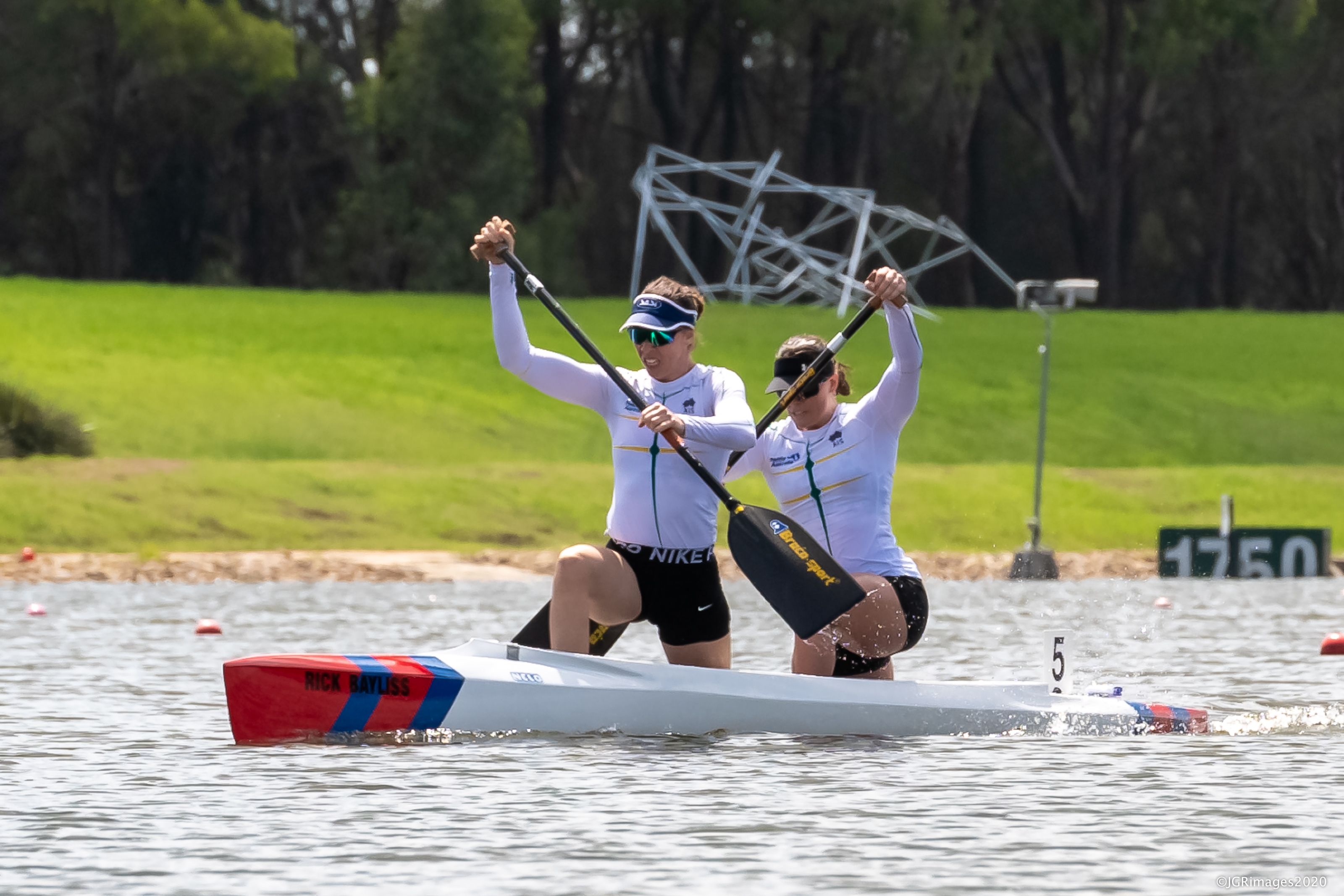 “The standards are there to help us be competitive overseas and I think it is exciting if we get close to that as it will put us in a really, really good position,” Bulmer said.

“If we can meet those standards by this time of the season that’s a dream. We are aiming for the Olympics though and we are focusing on more, which is a long way from now. The way we have been improving I don’t think it’s too far out to be thinking about more. I personally want to be thinking about higher goals than just the standard times because we will get close enough, I believe,” Wallace said confidently.

With Australia having secured their maximum quotas across the canoe sprint events, it was for the other Oceania countries to secure theirs with New Zealand provisionally taking home additional quota spots in the men’s K2 1000 as well as the K1 1000, while Samoa secured the women’s K1 500. For the other Oceania countries, the remaining continental quota spots still up for grabs are the men’s and women’s K1 200 which will be decided on Sunday.

In the mix for the men’s K1 200 spot on Sunday will be Tonga’s dual Olympian Pita Taufatofua, who already made several headlines in his sporting career, after representing Tonga in Taekwondo at the 2016 Olympic Games in Rio and in cross-country skiing at the PyeongChang Winter Olympics in 2018.

At Sydney International Regatta Centre Taufatofua is now aiming to write sporting history again by securing Tonga the first ever Olympic kayaking spot and compete in three different sports and three consecutive Games in the process.

Racing continues at Sydney International Regatta Centre with the focus now directed to national team selection and the first set of finals on the program.

Already on Thursday, two of the Australian U23 national team selection races were decided with 2019 U23 double world champion Tom Green (U23K1 and K4) taking home the win in the K2 1000 together with U23 K4 world championship partner Jean van der Westhuyzen (QLD). 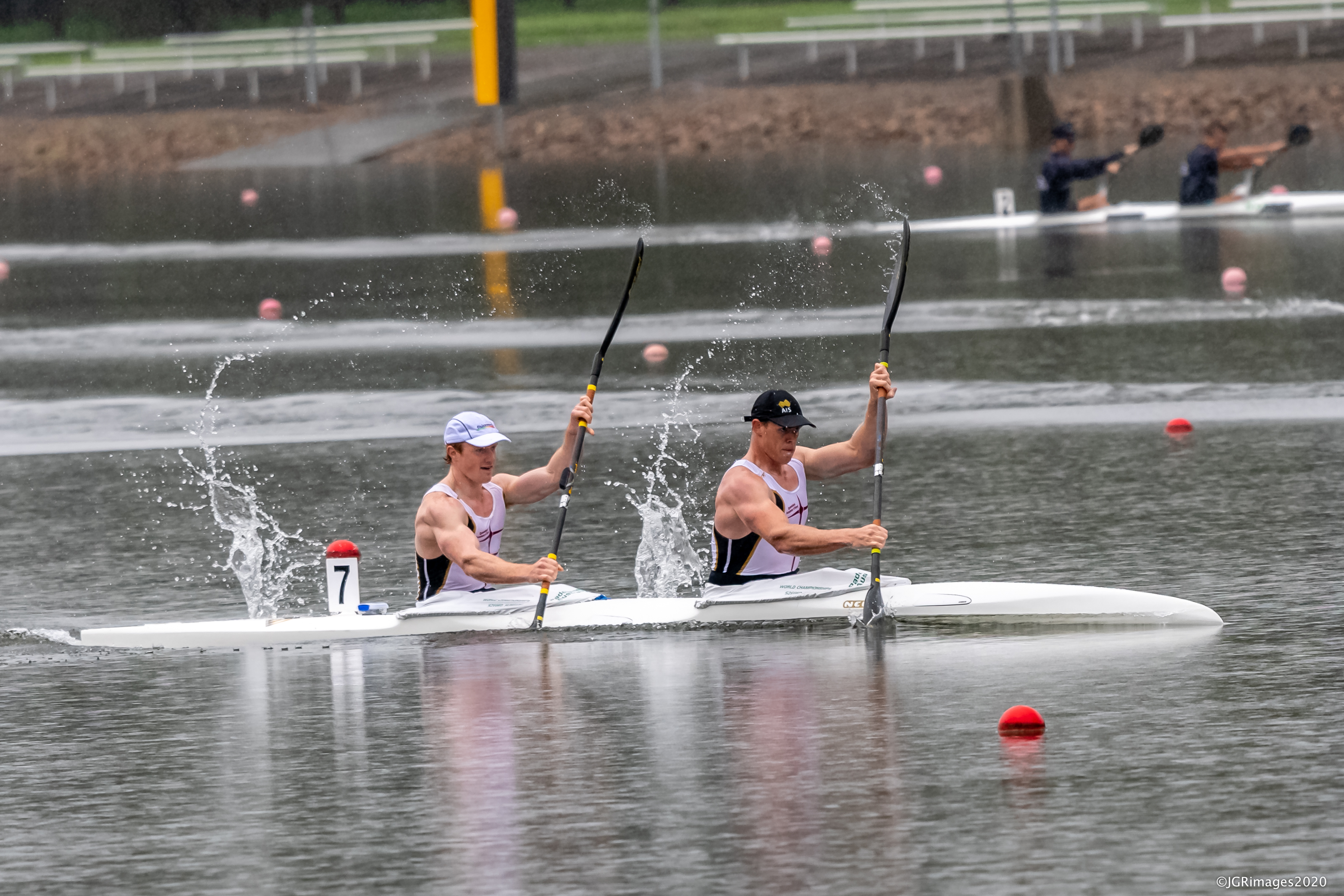 The women’s K2 U23 500 races was won by Kailey Harlen (NSW) and Ella Beere (NSW) who won in a tight race and only 0.01 seconds ahead of second placed Yale Steinpreis (WA) and Mackenzie Duffy (QLD), with both boats provisionally securing U23 selection.

“Makenzie and Yale had a really good race and in the end it was 0.01 so the closest that it could actually be without being tie and it was an exciting race,” Ella Beer said.

“We are a new crew, a very new crew and this is our first season paddling together and every race we have done so far, we have gone better and better. So hopefully we’ll do better and better again over this regatta and nationals. We got a few things to work on but we are definitely developing and honestly, we have nothing to lose. We will do our best and be happy with whatever happens really as long as we feel good in the boat and have a good race,” Beere added about racing in the senior races next.

“This was under 23 qualifying race so that means, we have locked in a spot to go to Germany (2020 ICF U23 Canoe Sprint World Championships) and I think that locking this in is just making us a lot more confident,” Kailey Harlen agreed. 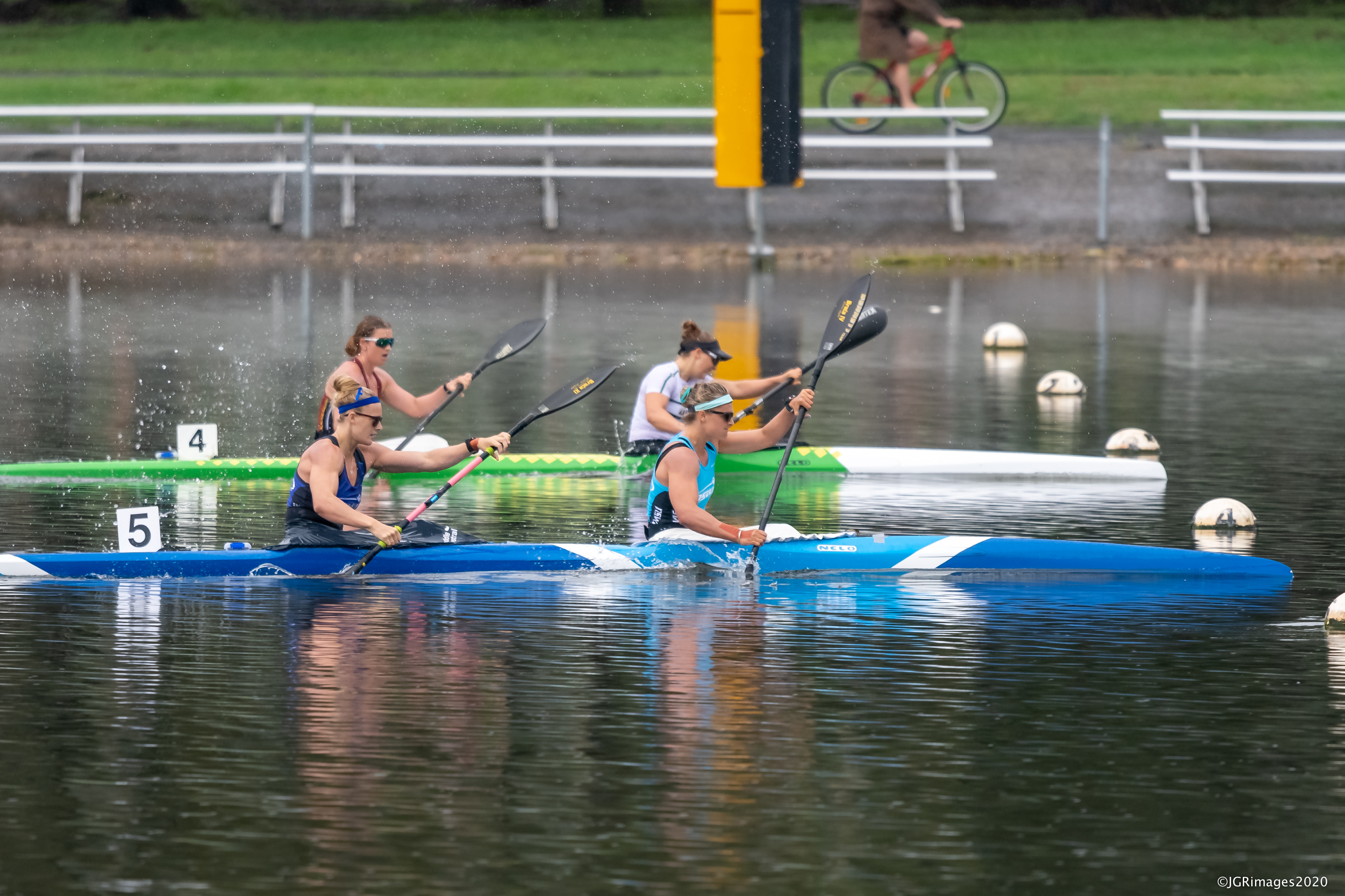 Over 150 athletes from ten countries are contesting the 2020 Oceania Association Canoe Sprint Championship and Paddle Australia Canoe Sprint GP2, with the event kicking off a hot month of paddling on Sydney’s 2000 Olympic canoeing courses and with Olympic and Paralympic team selections set to be decided in Penrith over the next couple of weeks at Sydney International Regatta Centre (SIRC) as well as at the Penrith Whitewater Course.