Six months out from the Tokyo 2020 Olympic Games, Paddle Australia’s canoe slalom paddlers have kicked off the international racing season in style with all top ranked Australians progressing through to the next round of racing on the opening day of the 2020 Oceania Canoe Slalom Championships in Auckland on Saturday (1-3 February 2020).

Australia’s most successful canoe slalom paddler of all time, dual Olympic medallist Jessica Fox, took out the win in both the women’s K1 and C1 qualifying, while Rio Olympian Lucien Delfour put in a strong second place in the men’s K1 qualifying.

The men’s C1 also got a first run in, which was won by Western Australia Steven Lowther, but with less than 30 C1 paddlers at the start line in Auckland and with the event doubling up as the final Tokyo 2020 continental qualifier in the class, it is tomorrow’s semi-final and final run that will count.

The men’s C1 continental qualification will be decided between Australia, New Zealand and the Cook Islands on Sunday and each of these National Federations have nominated up to three athletes to contest for the quota. For Australia, last year’s world championships C1 athletes Daniel Watkins (TAS), Ian Borrows (NSW) and Tristan Carter (VIC) have been nominated to earn the Continental Olympic quota in men’s canoe and they made the most of Saturday’s trial run to get used to the course. 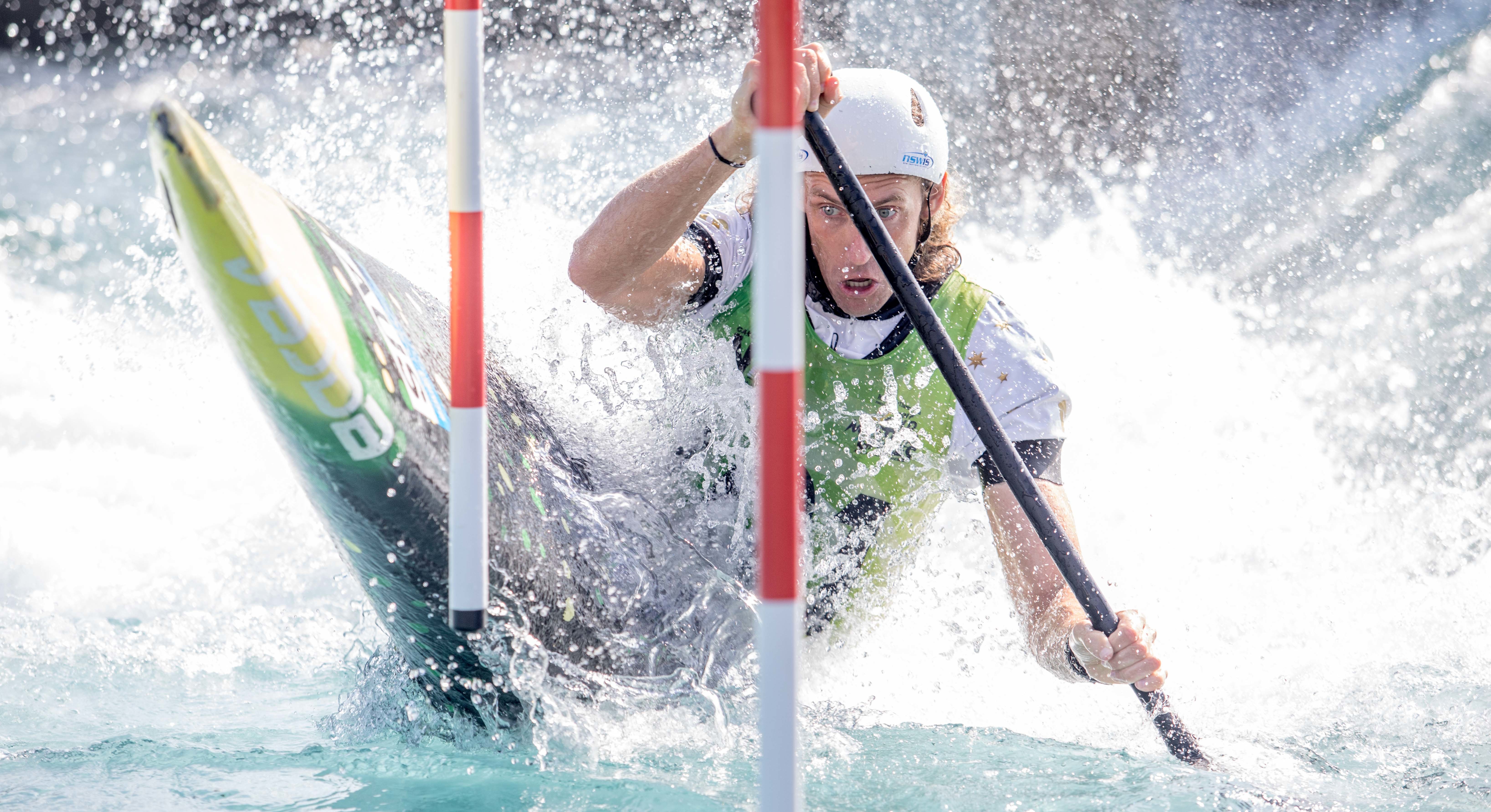 “Today was just to get a feel for the length of the course and what the course designers are doing and it’s all about tomorrow in the finals. We have Olympic qualification and Australia and New Zealand are battling it out to get a quota spot for the Olympic Games and then the Australians are also battling it out for points for selection. So, this is a big important race for us,” Rio Olympian Ian Borrows explained the significance of the Oceania Championships.

“It was a pretty solid run today. I had a big mistake in the middle, I came out a little bit too early in one of the ups but the rest of the run was pretty good. The course is pretty fun and I had a really good time. So hopefully we’ll back it through the semis and finish it off from there,” Borrows added after finished eighth in the trial run.

Out of the three nominated athletes in the C1, Daniel Watkins and Tristan Carter finished the first day in second and third respectively and ahead of New Zealand’s top ranked paddler Jack Egan in sixth. 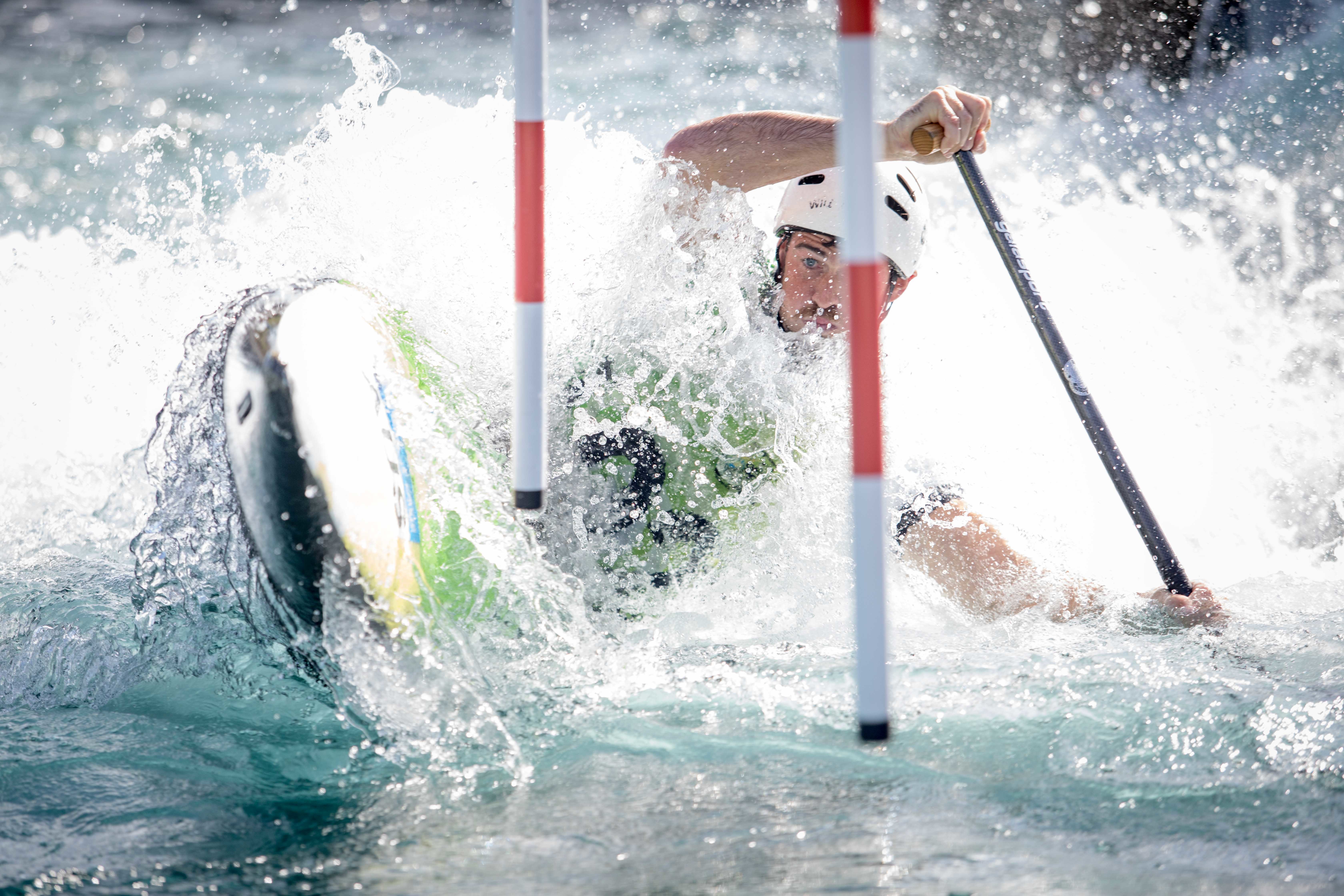 While securing the men’s C1 quota spot is a main focus for the Australia team, the 2020 Oceania Championships also count towards Olympic selection in both the men’s C1 and K1 events and Steven Lowther set a first mark on Saturday.

“I’m really happy with what was just a solid, controlled run and that’s what you want for qualifications. I’m quite pleased and I still got quite a bit of time in the bank to whip out tomorrow and I’m feeling confident going into the race,” Lowther said.

Ten Senior and U23 paddlers are representing Australia in the men’s C1 and with the depth in the class and the event counting towards both Olympic, World Cup team and U23 national team selection, the pressure is on to put in a strong performance in order to gain valuable selection points.

“Not being nominated for the quota spot takes a little bit of pressure off myself but in a way, it also has me on the edge of my seat hoping my team mates qualify the spot which I fully believe they will. But for me it’s just doing my own race and qualifying as that top nation spot to secure a good position for Olympic selection,” Lowther said confidently. 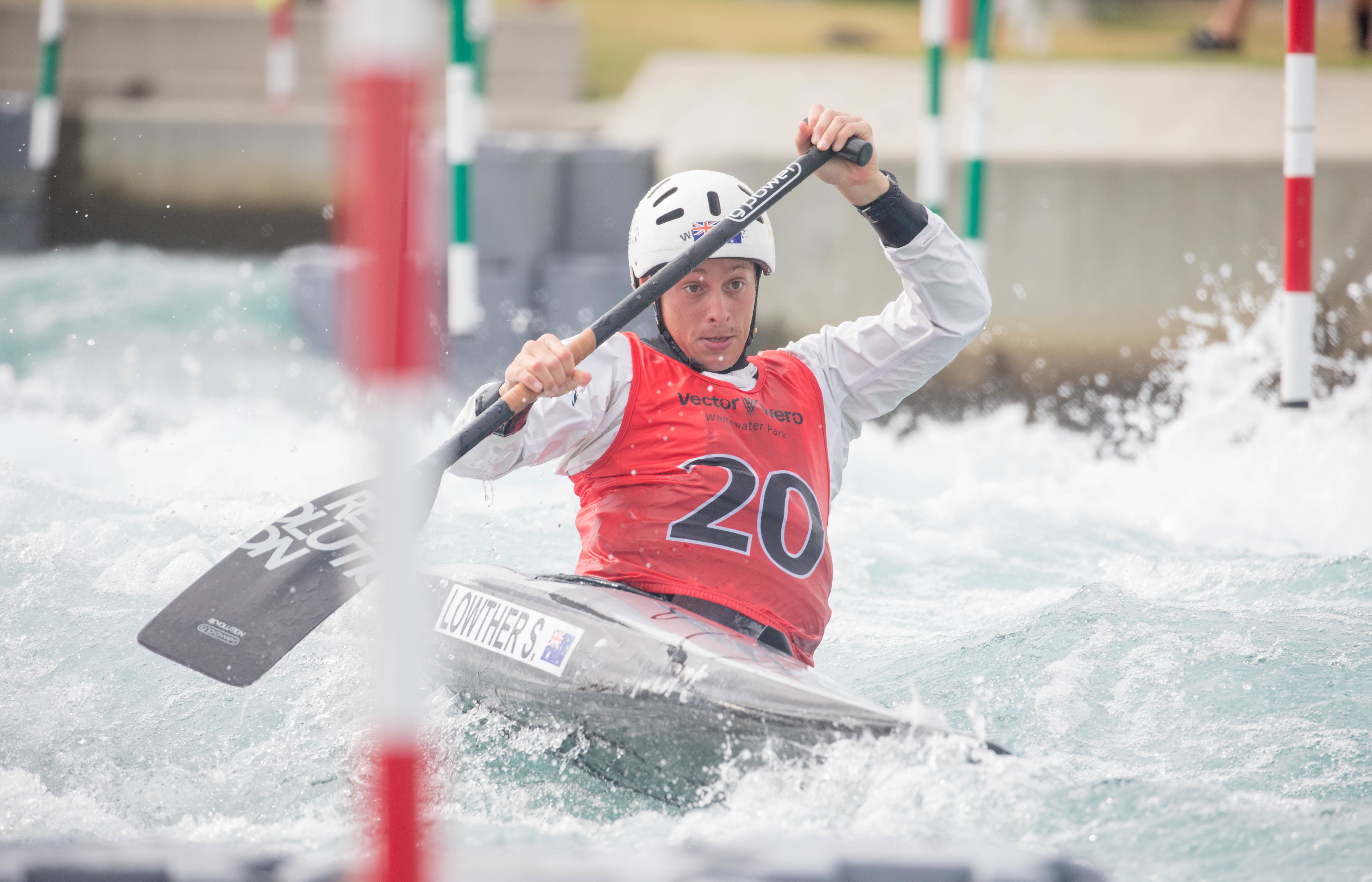 Internal team selection rivalry is also intense in the men’s K1, with Olympian Lucien Delfour finishing the qualifying round as the top ranked Australian in a clean run. Delfour secured Australia the quota spot at the ICF Canoe Slalom World Championships last year and finished the heat 3.96 seconds ahead of team mate Angus Thompson (NSW) following in fifth.

Three-time Olympian Warwick Draper (VIC) as well as Ben Pope (WA) were also in the top ten, while Tristan Carter and Daniel Watkins, who are doubling up, did enough to progress through to the next round in 11th and 13th.

Last year’s world championships paddler Tim Anderson (NSW) missed Monday’s K1 semi-final after a 50 seconds penalty in both the first and second run and will have another opportunity to go for selection at the Canoe Slalom Australian Open in a couple of weeks.

While the pressure is on for Australia’s men’s kayak and canoe paddlers as well as athletes vying for U23 selection, Jessica Fox, has already secured her Tokyo 2020 ticket and is the only Paddle Australia athlete who has already been selected on to the Tokyo 2020 Australian Olympic team.

For Fox, the 2020 Oceania Championship is mainly a training event and an opportunity to try different things in her Olympic preparation.

“It’s nice to be here back in Auckland at this epic course. It’s different to previous years when I had to get selected at this race so for me this is more like a training race and an opportunity to try out different tactics and just to see where I am at this time of the year when we have been training a bit heavier than usual,” Fox explained.

The Oceania Championships is also an opportunity to match herself against New Zealand’s Olympic K1 silver medallist Luuka Jones, who finished second in both the K1 and C1 behind Fox. In the K1 only +0.19 seconds separated the two, while Fox was +2.40 seconds ahead in the C1. 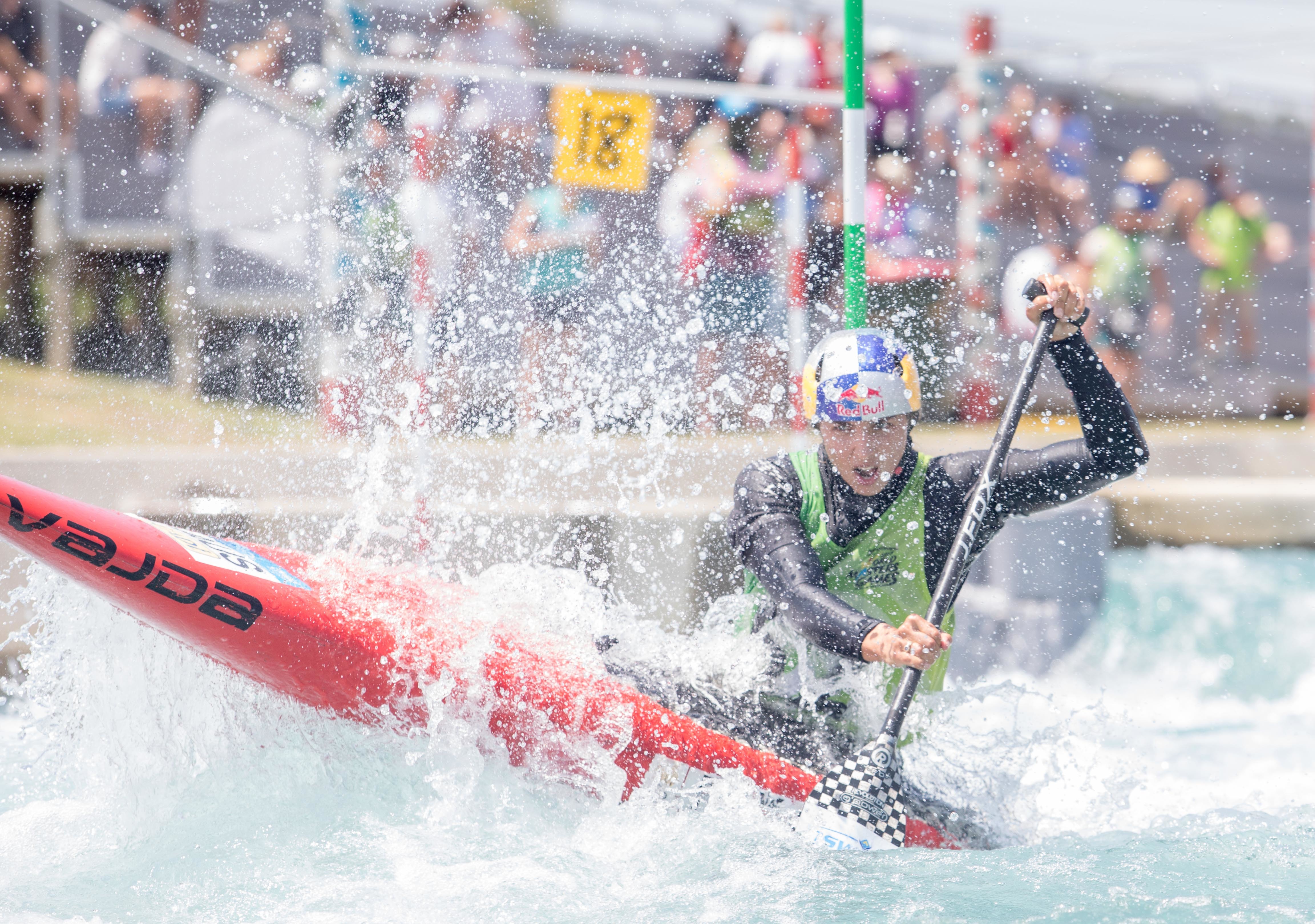 “I really enjoyed that run in the C1. The K1 was really physically hard so I was happy to get some nice smooth lines in the C1 and it felt like I was in the flow in that run. I’m excited to race here and to see how I fair against Luuka on her own course and to cheer on our Aussie boys who have to get the quota in the C1 men and it’s also the selection for the K1 men and C1 men for that Olympic spot. So, it’s quite a stressful weekend and I’m almost a bit more stressed for them than I am for myself but I’m looking forward to the next few days,” Fox added.

In the K1, Eckhardt finished a strong third and only +0.58 seconds behind Fox with Noemie Fox following in fifth.

“Overall, I was pretty happy with the way I paddled, especially in K1 I put down a clean run and made no major mistakes in either class which was really nice. There were a few things that I could have improved in C1 for sure but overall I’m happy how it all started and hopefully I can keep it together when it matters in the next few days,” Eckhardt said about her first international races this season. 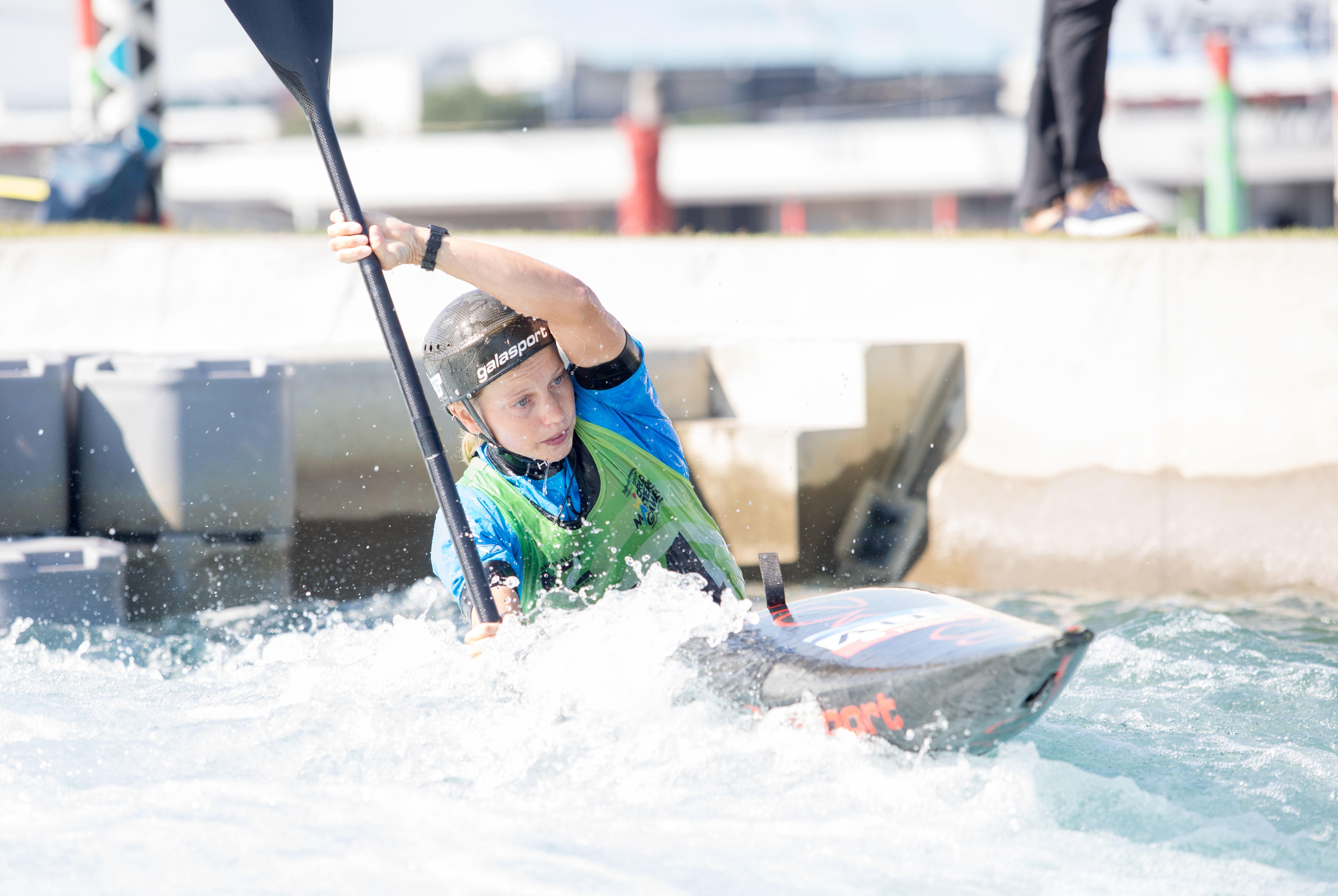 While the Olympic spots are taken, there is still a lot at stake for Australia’s strong women’s paddlers with U23 and world cup team selection on the cards.

“The girls spot at the Olympics are obviously decided with Jess pre-selected but for us the final result of this race counts as a selection race for both the U23 and the World Cup team. Plus, there is also a spot for the Olympic reserve which is decided from C1 results and this race also counts for that,” Eckhard explained.

First up on Sunday though, the whole team will throw their support behind the men with the C1 men semi-finals kicking off racing tomorrow.

“It’s pretty tense times for all the guys really. It’s the first Olympic selection race for them and we are also pushing to be the top Oceania boat in the men’s C1 as otherwise we won’t have the spot qualified. So we are really cheering for our guys to get ahead of the Kiwis as much as we love our neighbours, we really want that spot. It’s pretty tense between those guys but it’s all about being getting down and being as fast as you can,” Eckhardt added about the team tasks ahead.

Entry is free for spectators across all three days of the event, with racing continuing at 9:15 am local time (AEDT +2 hrs) on Sunday, 2 February 2020.

Livestreaming
The 2020 Oceania canoe slalom championships are being livestreamed on Sky Sport Next, in partnership with the New Zealand Sport Collective.

The Oceania Olympic Quota place will be determined on the final result achieved in the Oceania Championships by the highest ranked nominated athlete from an eligible Oceania National Federation i.e. in the semi-final or final.

Australia, New Zealand and Cook Islands are eligible to earn the Continental Olympic Quota in Men’s Canoe. Each of these National Federations may nominate up to 3 athletes to contest for the quota. 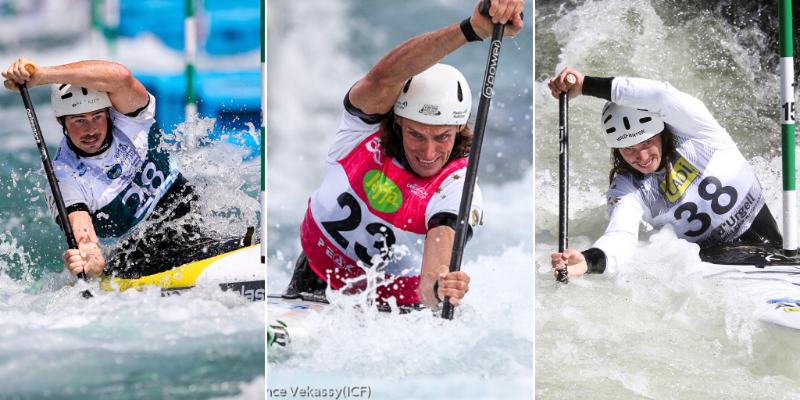