It was a golden day for Australia at the 2020 Oceania Championships in Auckland on Sunday with Paddle Australia’s canoe slalom paddlers winning two gold and one bronze medal and provisionally securing the fourth and final Olympic canoe slalom quota spot in the C1 men in the process (pending ICF and AOC confirmation).

Australia’s most successful canoe slalom paddler of all time, dual Olympic medallist Jessica Fox, continued her strong form from Saturday and backed up her women’s K1 win in the qualifying with a gold medal in the final on Sunday.

All eyes were on the C1 men though with the 2020 Oceania Champs doubling up as the final Continental Qualifier for Oceania and with Olympic selection kicking off for Australia’s C1 and K1 men in Auckland.

Australia’s canoe slalom paddlers already secured the maximum quota spots per country for the Tokyo 2020 men’s K1 and women’s C1 and K1 events at the 2019 World Championships and the Oceania Championships were the final opportunity to add the quota in the men’s C1.

Last year’s world championships paddlers Daniel Watkins, Ian Borrows and Tristan Carter (VIC) were the three athletes nominated to contest for the quota against New Zealand and Cook Islands and made their intentions clear early on in the day when they took out first (Borrows), second (Watkins) and fourth place (Carter) in the semi-finals. Fellow team mates Brodie Crawford (WA), Steven Lowther (WA) as well as Ethan Hodson (NSW) also progressed through to the top ten final.

New Zealand’s Jack Egan was the only other Oceania competitor in the final, but the pressure of holding New Zealand’s slim Olympic C1 hopes in his hands proved too much for the 18-year old teenager, who came unstuck with a 50 seconds penalty and some touches.

After that, it was a battle between the Australians, who were also vying for Olympic selection points. Watkins, who threw down the fastest run as the third last paddler on the course, saw Egan’s misfortune as he was warming up and was reasonably confident the Australian spot for Tokyo was in the bag, before charging down the course.

“I did see Jack’s run when I was warming up but it did not really change my race plan. With only one young new Zealander and six of us Aussies in the final it was pretty likely that we would get that spot. So I kept the same race plan and really attacked hard, just to try and race against the others. It was mostly a race between me and the other (Australian) boys,” Watkins said.

“It was a super challenging race today, a really hard course to start with, then a bit of the wind and the pressure of everyone throwing down and it was really exciting and really hard work out there,” Watkins added. 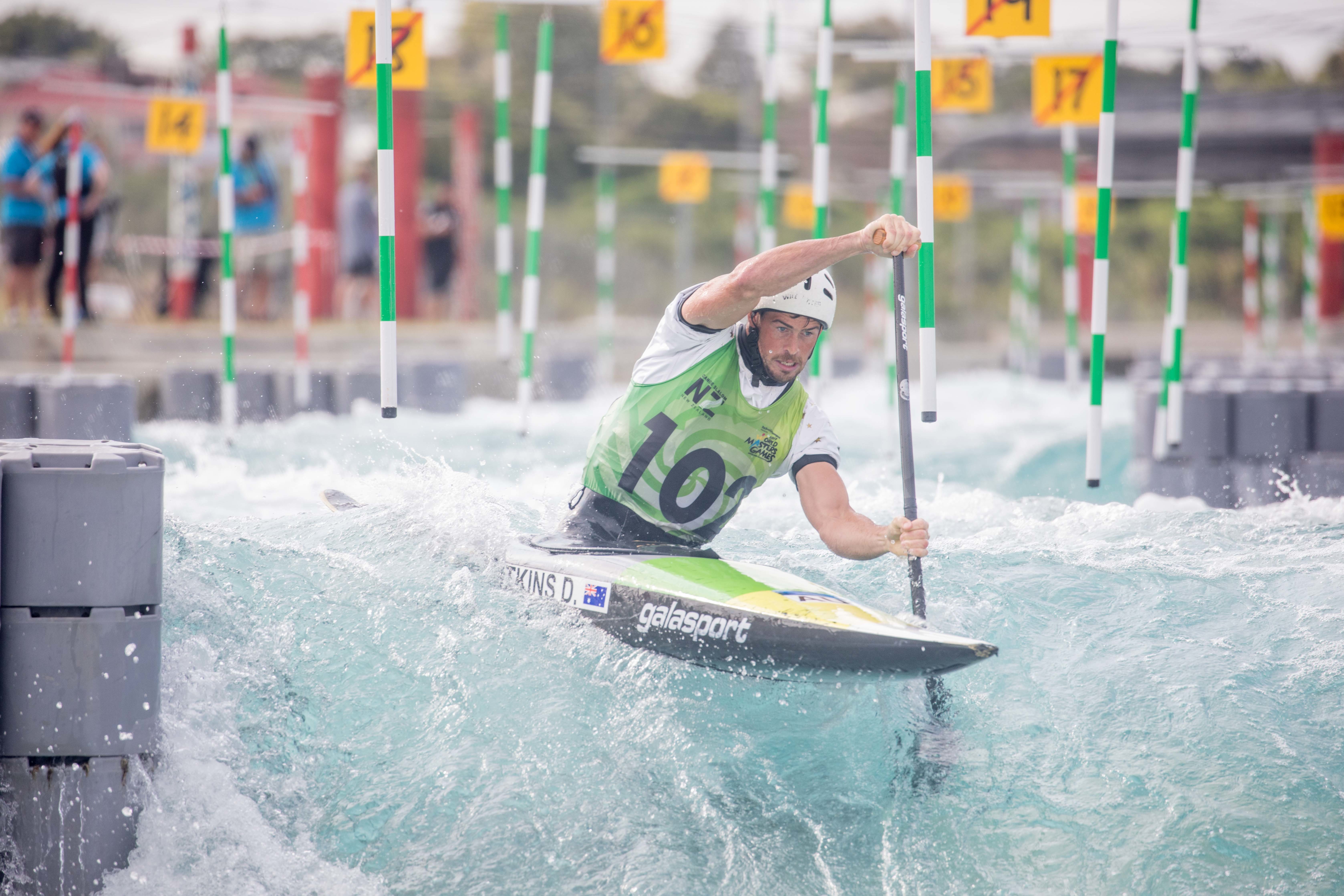 Watkins took out the win in a clean 101.57sec run and finished just 1.77secs ahead of Zach Lokken (United States) and 4.55secs ahead of team mate Ian Borrows.

This puts Watkins in the lead ahead of the final round of Olympic selection at the Australian Open in a couple of weeks (21-23 February 2020), but with Borrows right on his heels, it will all come down to the final two selection races in Penrith.

“Everyone is paddling really well so it’s going to be a bit of a fight out. I’ve got a bit of a home course advantage myself in Penrith so I’m really looking forward to getting back home and back into some training,” Blue Mountains local Ian Borrows said.

“For Australia to get a spot in the men’s C1 is awesome. As long as we got a spot it’s all good and now it’s a battle between the Aussies to see who can claim that spot. With only one place up for grabs it’s a tight field,” Borrows added about the quota. 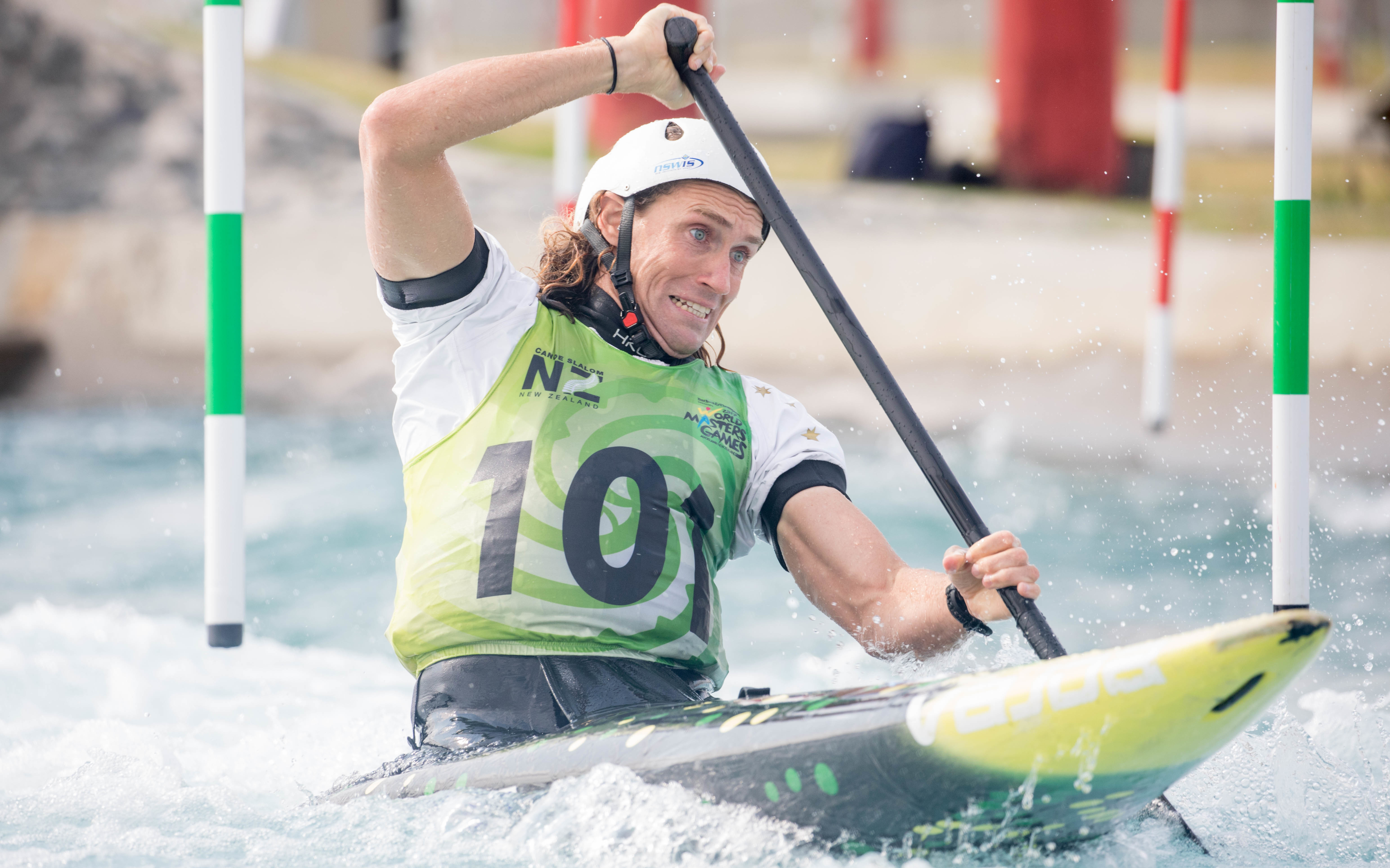 Finals on Sunday took place in challenging conditions at Vector Wero Whitewater Course with the wind continuing to increase during racing.

“The course itself is really good and the facilities are great. But the course they set today was really hard especially with the wind. We probably had 20km/h wind going out there and those gates were moving around and there was not much leeway to the gate so it was really hard racing and really hard to get it clean. But it’s been really fun,” Borrows said about the conditions.

Jessica Fox, who has more individual world championship titles than any other canoe slalom paddler in history, showed her class once again on Sunday, when she took out the win in the women’s K1 over New Zealand’s Rio Olympic silver medallist Luuka Jones in the challenging conditions.

Fox qualified third-fastest in the K1 women’s semi-final, but the 25-year-old tore more than six seconds off her qualifying time in the final, posting a faultless 102.14secs, just 0.49secs ahead of Jones with France’s Prigent following in third.

Fox, who has already secured her Tokyo 2020 Australian Olympic team spot in both the women’s K1 and C1, relished the chance to cross the Tasman and compete against the flying Kiwi, with the pair set to do battle again in tomorrow’s C1 final. 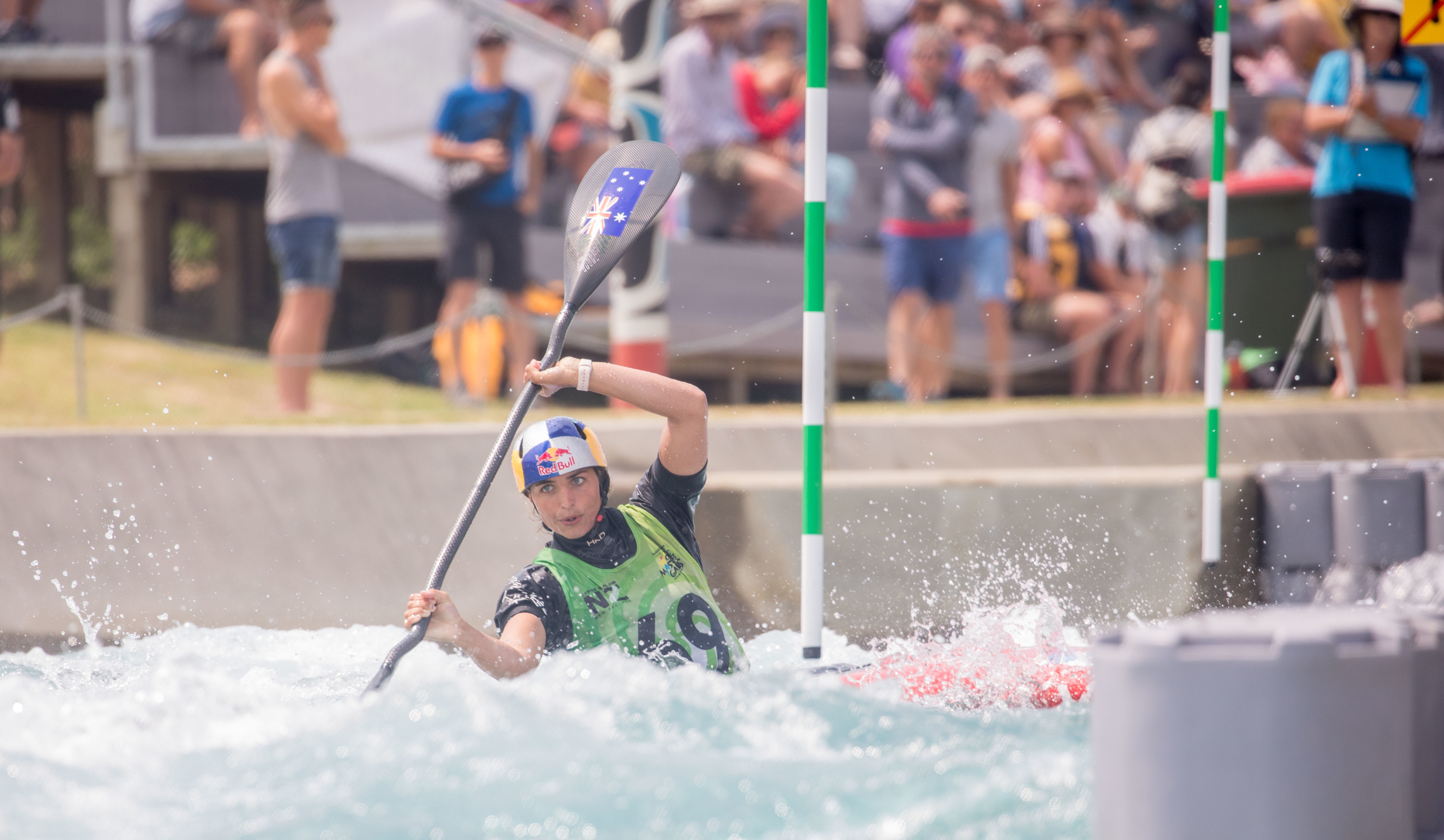 “The course is really technical and there are a lot of move throughout the whole course so you got to really be positioning well and then attack it when you can and with the wind on top of that, it was quite a challenge,” Fox said.

“So I’m very happy with that time because I had a mistake earlier on at gate three and I just tried to attack it and fix a few errors from my semi,” Fox added who is making the most of these racing opportunities to prepare for her Olympic campaign.

While the Olympic spots are taken, there is still a lot at stake for Australia’s strong women’s paddlers at the Oceania Championships with U23 and world cup team selection on the cards and Tasmania’s Kate Eckhardt made the most of her opportunity to set a mark and finished fourth in the women’s K1 final and first U23. Team mate Noemie Fox, who also qualified for the final, finished ninth. 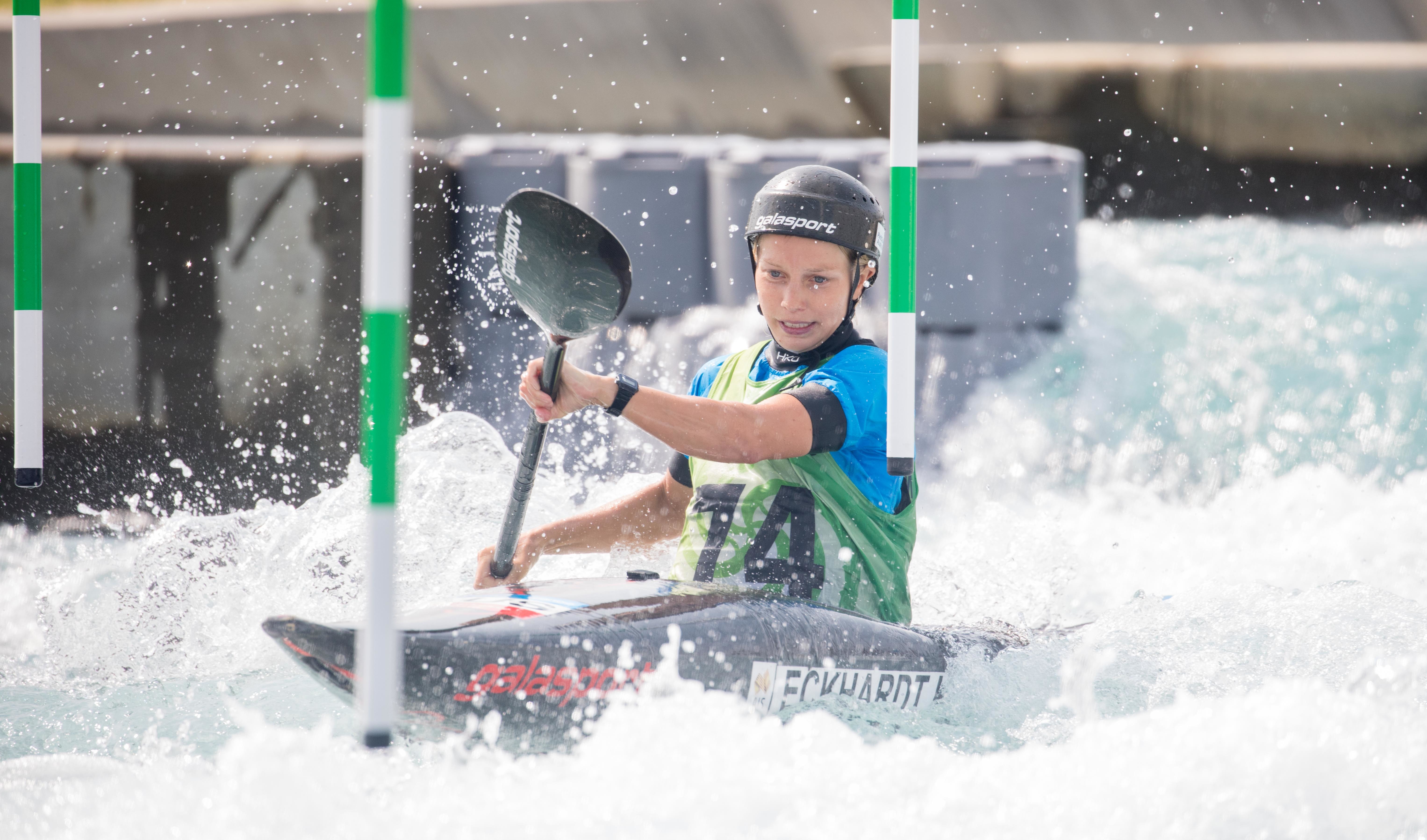 Racing concludes at Auckland’s Vector Wero Whitewater Park on Monday with the semi-finals and finals in the women’s C1 and men’s K1.

Entry is free for spectators across all three days of the event, with racing continuing at 9:15 am local time (AEDT +2 hrs) on Monday, 3 February 2020. 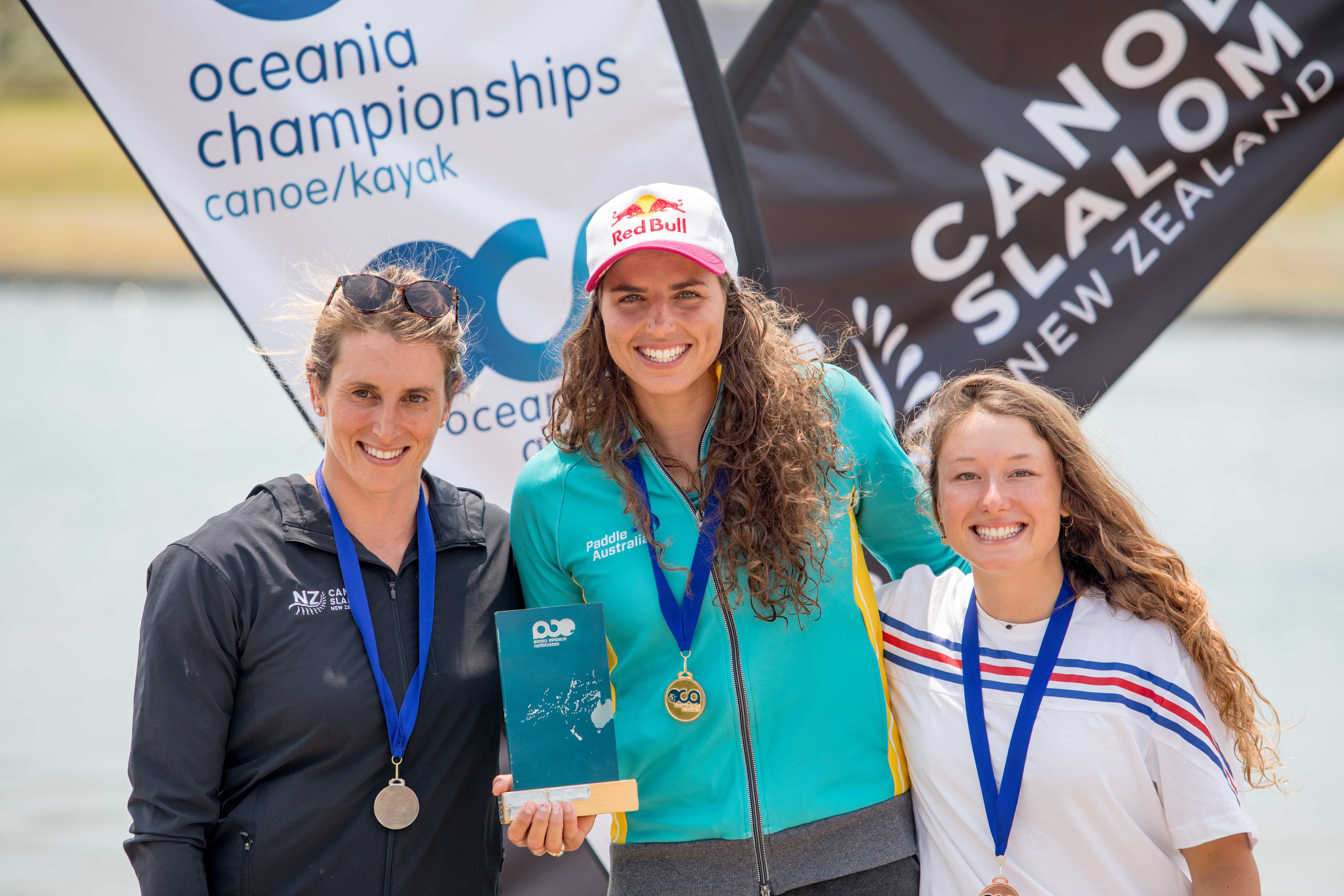 Livestreaming
The 2020 Oceania canoe slalom championships are being livestreamed on Sky Sport Next, in partnership with the New Zealand Sport Collective.