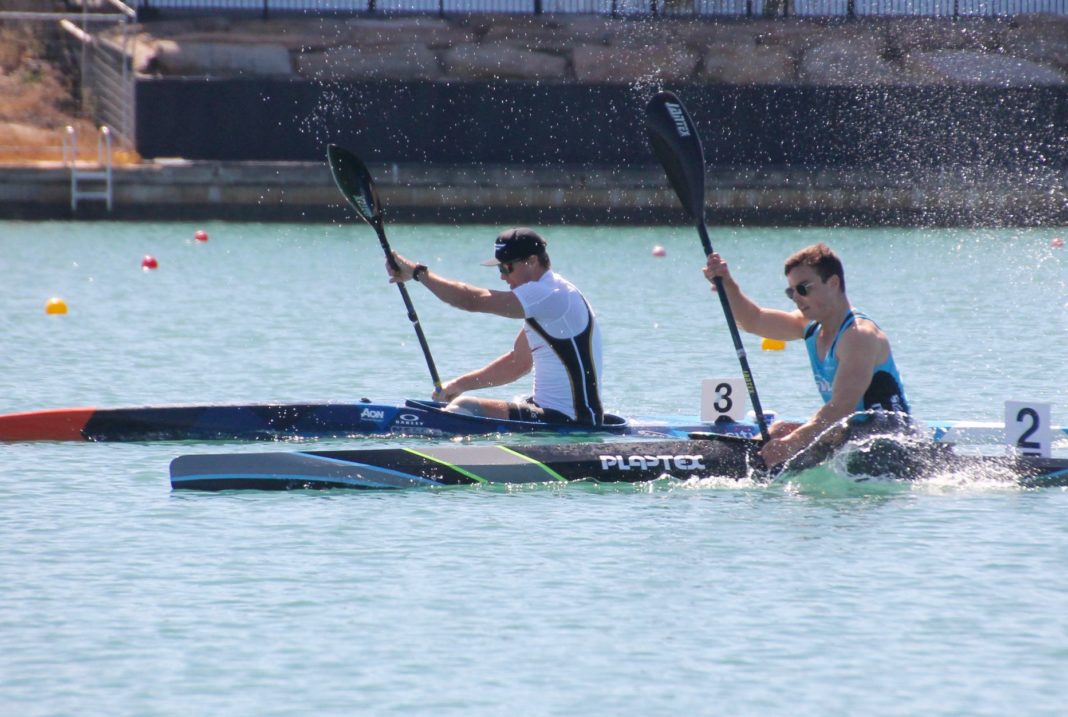 2016 Paralympic champion and ten times world champion Curtis McGrath made the most of the first racing opportunity of the season, competing in both the KL2 kayaking as well as the VL3 canoeing event over the Paralympic 200 metres distance. “It was the first 200ms I have done of the 2020 season so it’s nice to see where we are at and I’m feeling pretty good,” McGrath said after racing.

“Tokyo is still a long way out but you want to identify where the weaknesses are and fix them up. But overall I had pretty good races and I’m pretty happy with where we are at considering we haven’t done any speed work so far.”

“The whole team’s going really well and I think everyone’s on track. Hardly anyone of us have done any racing training, so it’s all been fitness and power work, trying to get fit and strong for the big season ahead.  It will be interesting to see how everyone develops over the next couple of months and we’ll see how we go as we get closer to nationals,” McGrath added.

Paracanoe will be part of the Paralympic Games program for the second time in Tokyo 2020 and the level of the paracanoe competition has been continuously on the rise around the world with McGrath taking home his world champion titles nine and ten by the narrowest of margins this year.

McGrath will be aiming for two gold medals come Tokyo 2020 with the Vaa’ outrigger canoe class included for the first time on the Paralympic program and following a thorough analysis of his racing at the world championships, he has identified the things he will need to work on. 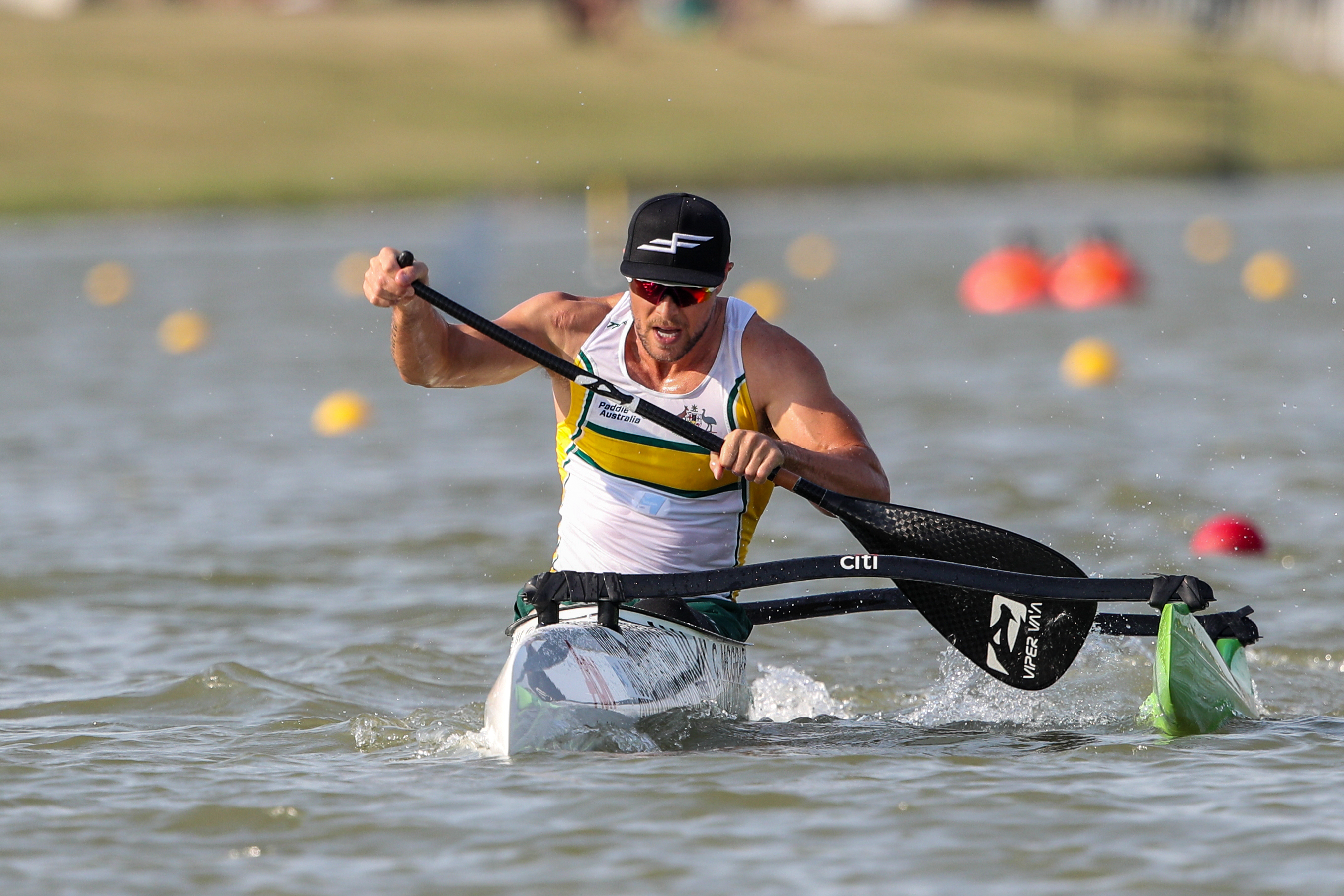 “Everyone’s stepped up and everyone is excited about Tokyo being just around the corner and wanting to qualify strongly and cementing themselves in the top spots for the Tokyo event.  And I have to race those competitors.  Generally, I’m not that great out of the start gate and I come through at the end and that’s obviously something we will be looking at to really fix that up come September,” McGrath explained.

Following a short break over Christmas, McGrath will head straight back into it for Queensland State Championships, then GP2 and nationals in the new year.

“That’s the next three months and there are obviously a lot of competitions in that time and also a lot of training and trying to fix those faults I just mentioned.”

2020 will also see the opportunity for the paracanoeists to go for world champion glory ahead of the Games, with McGrath aiming to defend his world champion titles before aiming for the Paralympic crown.

“It’s a little bit different for the Paras, we have the opportunity to be world champions because our pre-Tokyo international event in Duisburg is a world championship, unlike the able-bods, they just have a world cup.  That’s our second qualifying event so that will be a bit about testing the waters to see where everyone’s at and it will also be the opportunity for some countries to qualify and it should be a good event. I really like racing in Duisburg,” McGrath said.

The world championships ahead of the Games is also an event Paralympian Dylan Littlehales is looking forward to.

“Our World Champs in Duisburg in Germany in May will be a great hit-out, to get the seeding done for the Tokyo Games and to see where everyone is at coming into the most important year,” Littlehales said.

At only 20-years of age, Littlehales was one of the most improved athletes on the Australian paracanoe sprint team, setting a couple of new PBs throughout the 2019 season and finishing the World Championships with only 0.09 seconds off the podium.

“I’m feeling very good at the moment.  We’ve got a great program down at Narrabeen and it’s working well.  I had a great season last year and I can continue that this year,” Littlehales said, who was going head to head with McGrath on the weekend. 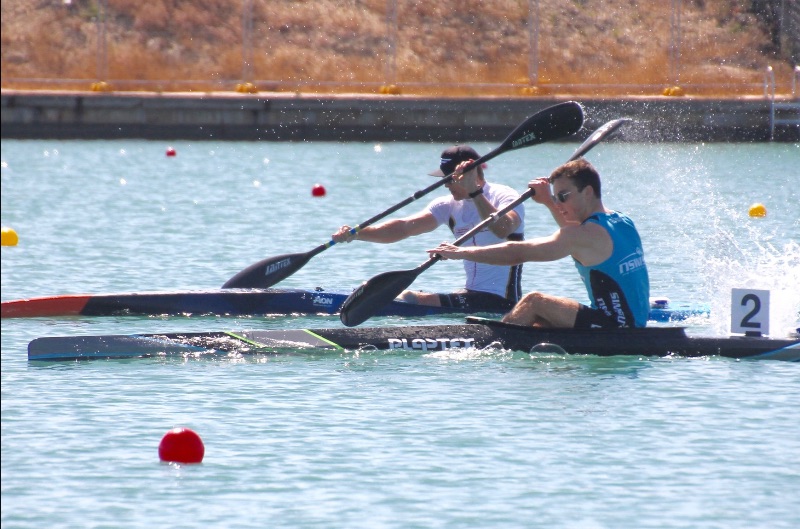 “It’s always tight racing with Curt and it’s a good hit-out for the first event of the year.  We’ve done a lot of longer distance work just trying to build the aerobic base down at NSWIS over the past few months so it was good to have a good hit out in Adelaide and we’ll then build up the speed slowly over the next couple of months.  The point of going to the GP is to get that race experience, you plan your days out and you know exactly how you are going to be racing in Tokyo and just be prepared for any situation.”

“It is still early in the season so I wasn’t too concerned with my 200m race times and just going through the process.  It’s good to be back racing though and we had some good conditions at West Lakes.  I’m excited for the coming year and especially the Tokyo Paralympic Team selection,” Seipel said. 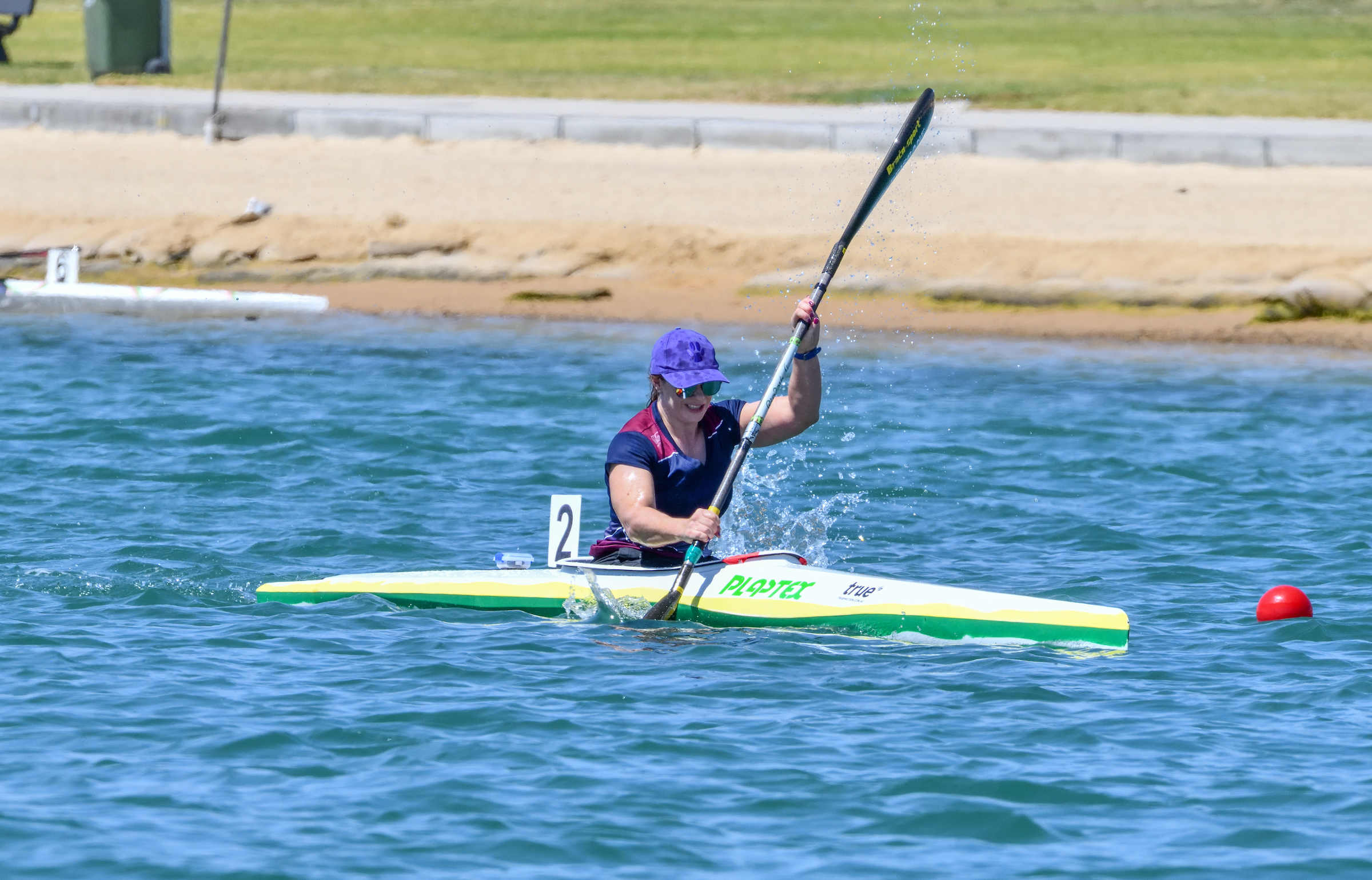 Race experience was also key for Paralympic silver medallist Amanda Reynolds, who was happy with her progression over the weekend.

“I’m happy with my progression this weekend as I’m still in an endurance block and this being our first hit out of the season, it was good to stretch the wings,” Reynolds said.

“Things are starting to come together; During the off season I managed to get some cross training in with surf lifesaving and gained my bronze medallion so I’m pretty stoked with that, it gives me the opportunity to give back to the community and learn new skills.”

Reynolds dedicated her weekend’s racing to her close childhood friend Darren, who unexpectantly passed away last week.  Despite a challenging weekend, Reynolds remained positive though and focussed on the things ahead.

“My focus now is on the oncoming session for kayak and to keep dotting the Is and crossing the Ts. I know it’s going to be a challenge as the KL3 class has a few new paddlers that have lifted competition but I’m not one to say no to a challenge, so as I see it bring it on,” Reynolds said. 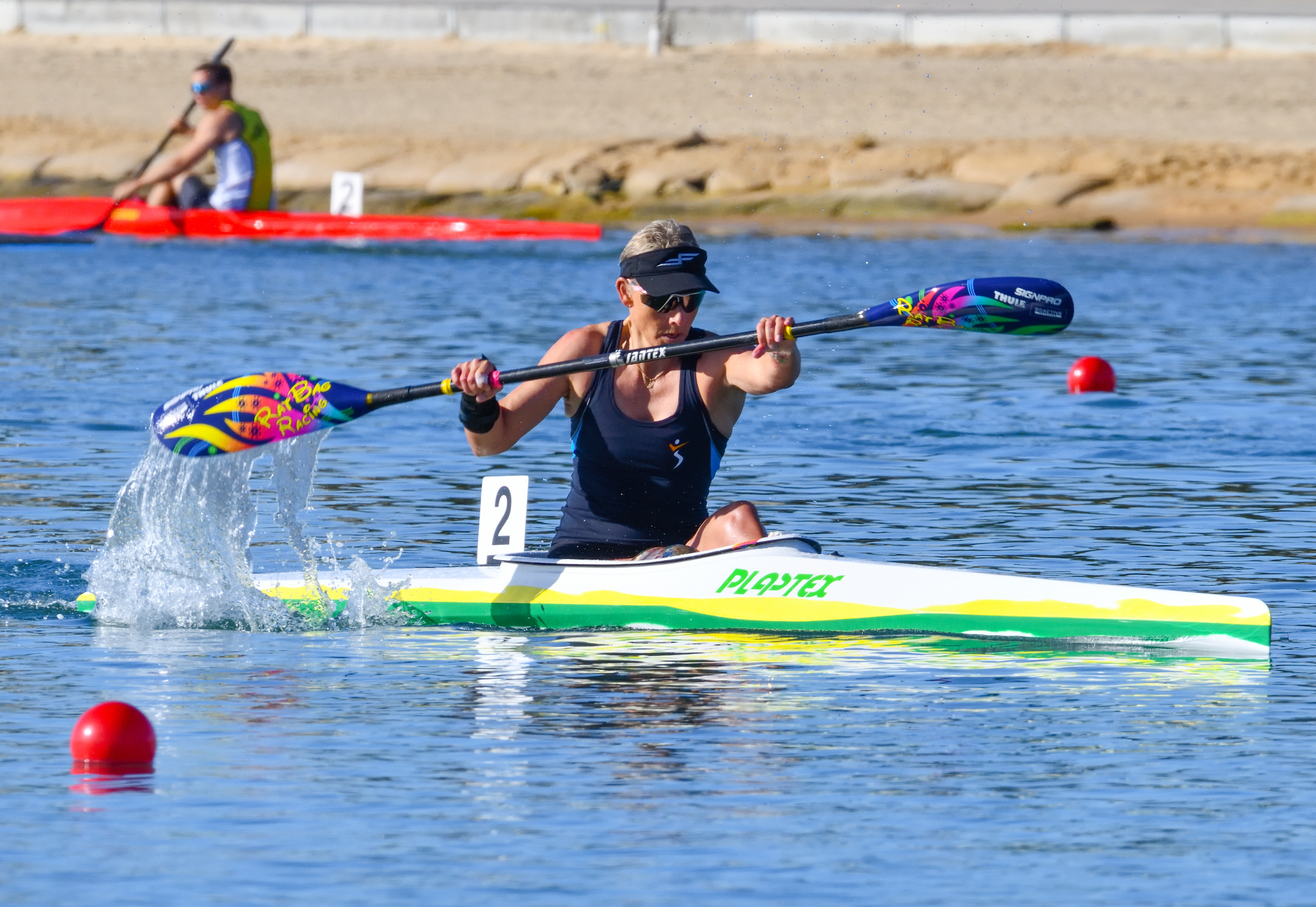 Paddle Australia’s Paracanoeists will be recognised for their achievements at tonight’s AIS Performance Awards (ASPAs) with Curtis McGrath and Susan Seipel amongst the finalists for the 2019 Male and Female Para-Athlete of the year award.

“It is truely an honour to be nominated for female para-athlete of the year at the Aspas.  There are so many incredible performances from female Para athletes this season it is fantastic to see and be a part of,” Seipel said.

McGrath, who also received the Paddle Australia Para-athlete of the Year award at the start of November, acknowledged the team effort going into any award nomination.