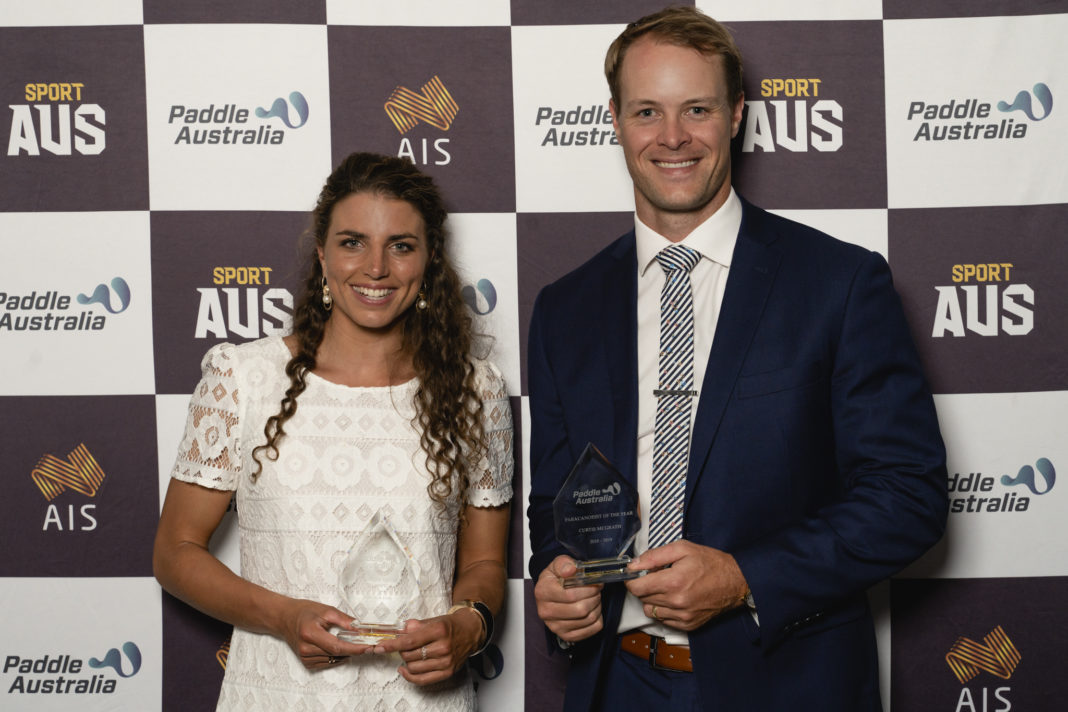 World #1 and dual 2019 world cup champion Jessica Fox received the 2019 Paddler of the Year – Olympic award topping off a successful year and a special day with the 25-year old celebrating her selection to the Tokyo 2020 Australian Olympic Team at the awards night.

Paralympic champion Curtis McGrath OAM was recognised for another unbeaten season and world champion title nine and ten with the Paracanoeist of the Year award.

The pair headlined a stellar line-up of athletes, coaches, instructors, technical officials and volunteers, who were recognised for their outstanding achievements and efforts over the past year at the 2019 Paddle Australia Annual Awards night hosted by Seven News Sydney’s sport presenter Jim Wilson at the Mercure Sydney.

It was the perfect finish to an exciting day for Jess Fox, who on Saturday became the fifth Australian athlete to secure her boarding pass to the Tokyo 2020 Olympic Games, her third Olympic Games, after the AOC confirmed her selection earlier in the day. See AOC selection announcement here: http://bit.ly/FoxTokyo 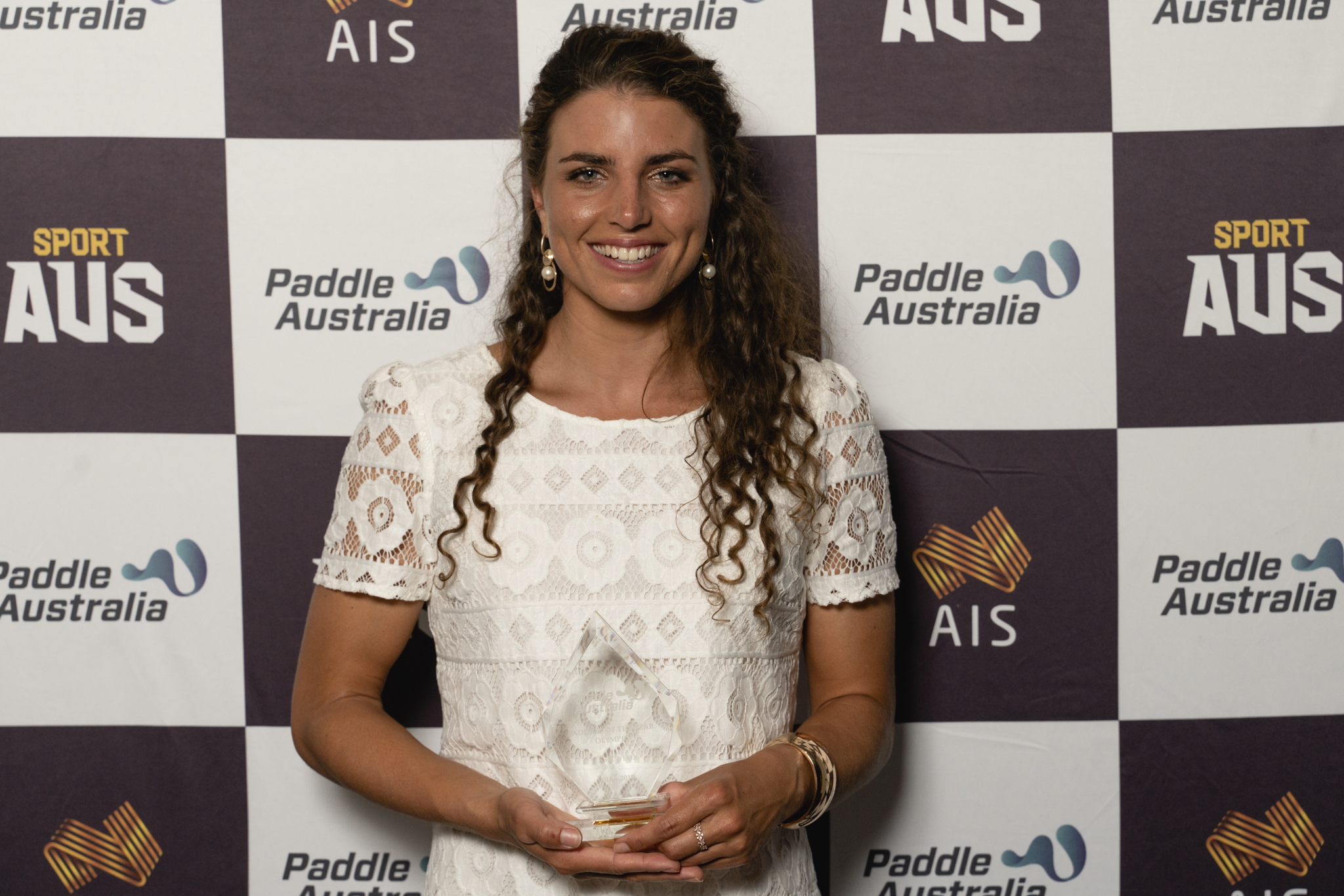 “Today was really special to be named on my third Olympic team and I think it’s still as exciting as the first time, it’s still extremely special. I progressed a lot the last three years and I’m a very different paddler from 18-year old Jess in London and Rio Jess and I’m excited for the next 258 days. We’ve been to Tokyo, we’ve had a look and the world championships have left me very hungry and excited.” Fox said about the count-down to Tokyo.

The Paddler Of the Year – Olympic recognises another stellar season for Jessica Fox, who defended her K1 and C1 world cup crown in 2019 making it three consecutive world cup wins in the C1 and two in the K1. Fox finished the season with two silver medals at the 2019 ICF Canoe Slalom World Championships securing Australia the canoe slalom spots for Tokyo 2020 that will see her aim for double gold next year.

Fox’s parents Myriam Fox-Jerusalmi and Richard Fox where both at the Australian Olympic Team selection announcement as well as at the awards night to celebrate together with their daughter. 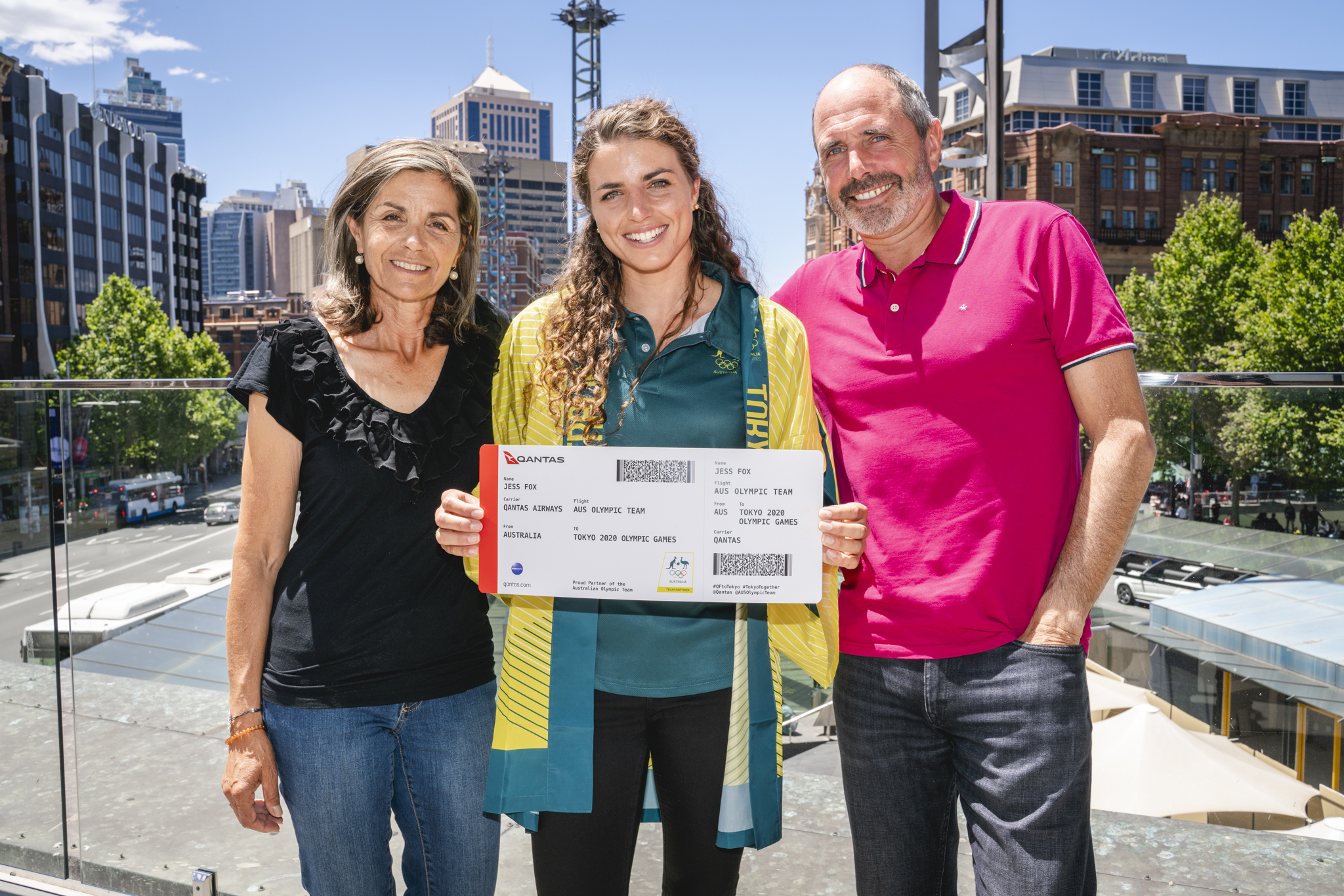 “It’s really special to share that moment with my family and to look back on the year and to reflect. I’ve had some great memories this season and some great moments on the water with friends and team mates and I’m really excited about the next year. It takes a village and I’m thankful for everyone who’s helped us get there.”

And about the paddler of the year award she added, “It’s always nice to come here and celebrate all the paddle sports. I loved hearing all the stories and see all the people celebrated and I’m very proud of being part of Paddle Australia.”

I also want to congratulate all the award winners and nominees tonight as well as Alyce (Burnett), Alyssa (Bull) and Tom (Green), the finalists in my category. And thank you to our team on the slalom side and Paddle Australia and everyone who supported us. It’s been a big year and it will even be a bigger one next year.”

McGrath also secured Australia the quota spots for Tokyo and with the Vaa’s (outrigger) canoe premiering at the Tokyo 2020 Paralympic Games he will have the chance to go for two Paralympic gold next year. 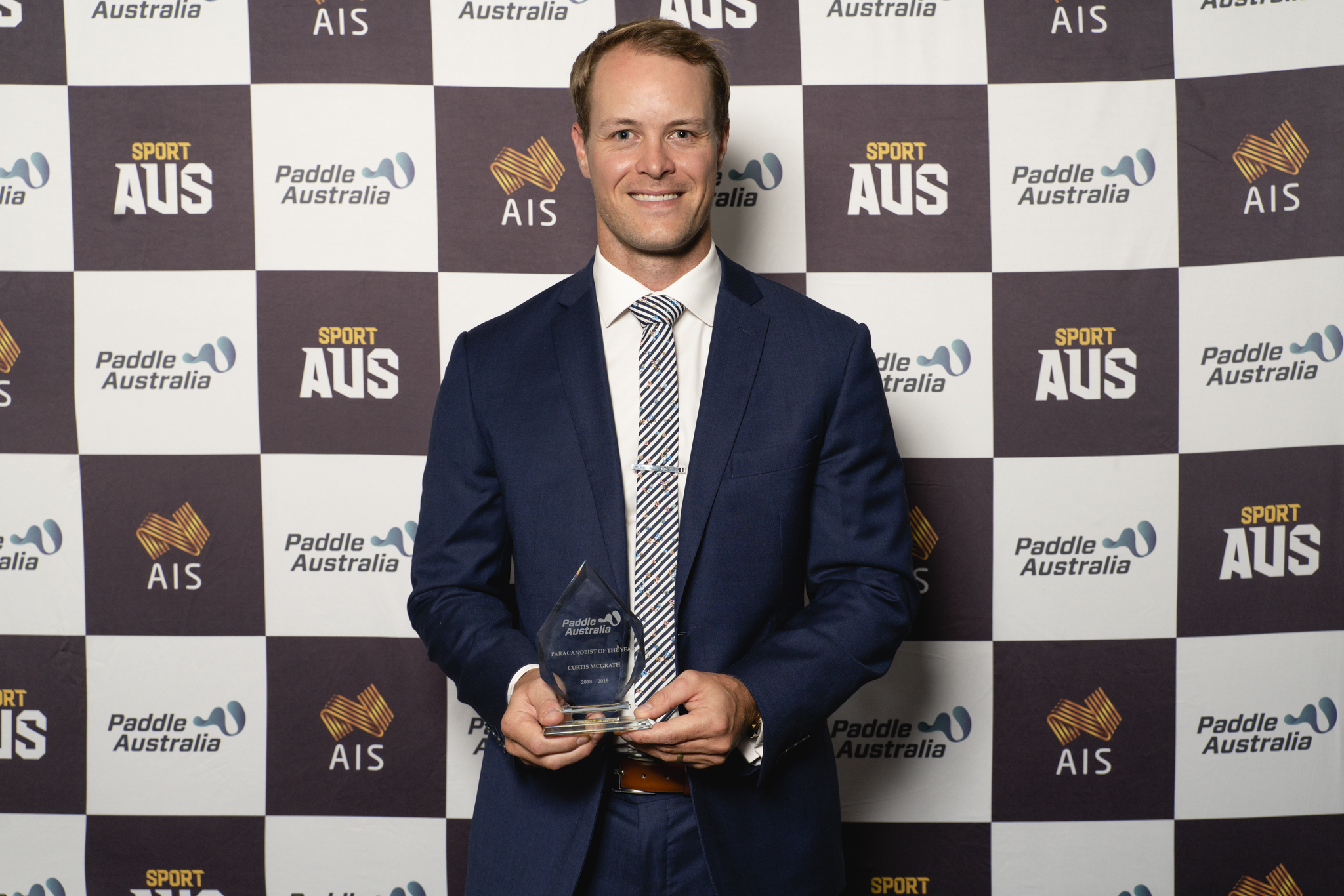 “I think this year I was pushed a lot more than I have been previously in my races, but I will work on that and hopefully come Tokyo we’ll have the success like we’ve had in Rio, if not more with our squad. I just wanted to thank the people that have supported me in our team and getting us to Tokyo will be another hurdle, but I’m really excited about the opportunity to represent Australia,” McGrath said about the goals ahead.

Australia’s strong season in paracanoeing was also recognised by paracanoe head coach Shaun Caven taking home the 2019 Coach of the Year award. The team brought home two world championships gold medals won by Curtis McGrath, while Susan Seipel added one silver and one bronze to the overall medal tally. Australia’s paracanoeists topped it all off by securing Australia four quota spots for the Tokyo 2020 Paralympic Games. Paracanoeing, which premiered at the 2016 Rio Paralympic Games, has been going from strength to strength and former head coach Andrea King, who established paracanoeing on the map in Australia and gave the foundations for the last four years, was recognised at the awards night for her work with the Services to Paddling award.

Paddle Australia’s future is looking bright with a long list of high-performing under 23 and Junior paddlers amongst the finalists at the awards. 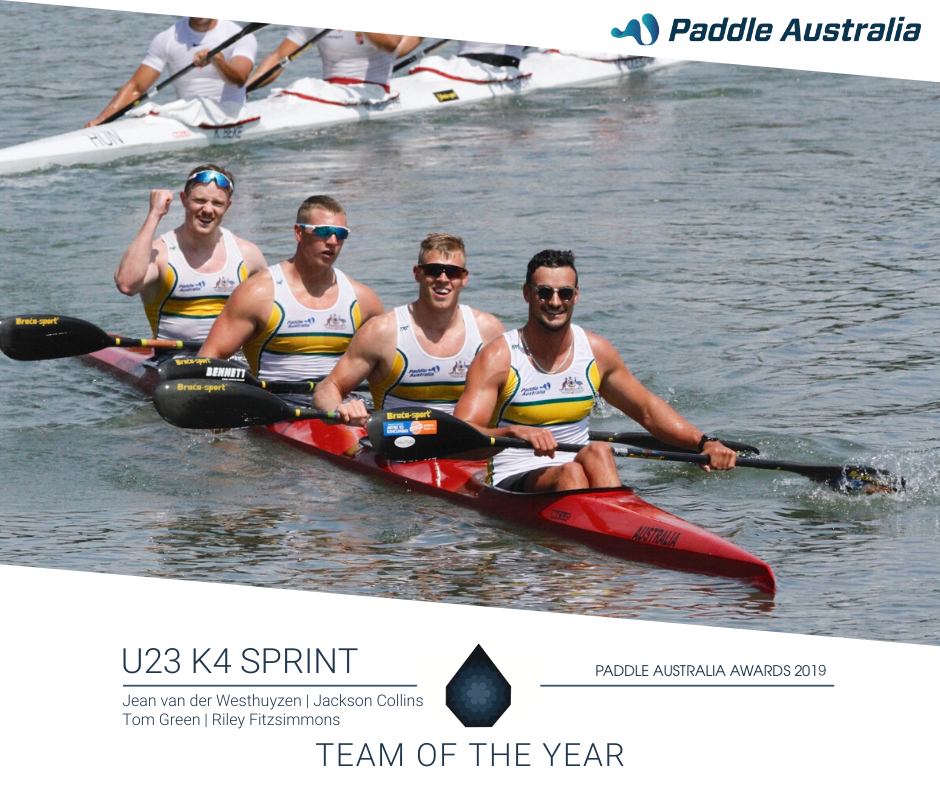 In addition to the annual awards, three-time Olympian and Olympic silver medallist Danielle Woodward as well as four-time canoe marathon world champion and adventurer John Jacoby were recognised for their achievements in the world of paddling with an induction into Paddle Australia’s Hall of Fame by Paddle Australia life member and Hall of Fame member Helen Brownlee AM.

The induction to the Paddle Australia Hall of Fame, which was established in 2017, represents the highest level of recognition for an individual’s contribution to canoeing.

“It’s not only the list of things he does that I give Jez the award. It’s his vision, his passion, and his generosity and encouragement of others that truly represent what Paddle Australia is about and I’m giving him this award because of the exceptional influence and impact that he has on paddling in Australia and across the world,” McQuitty said. 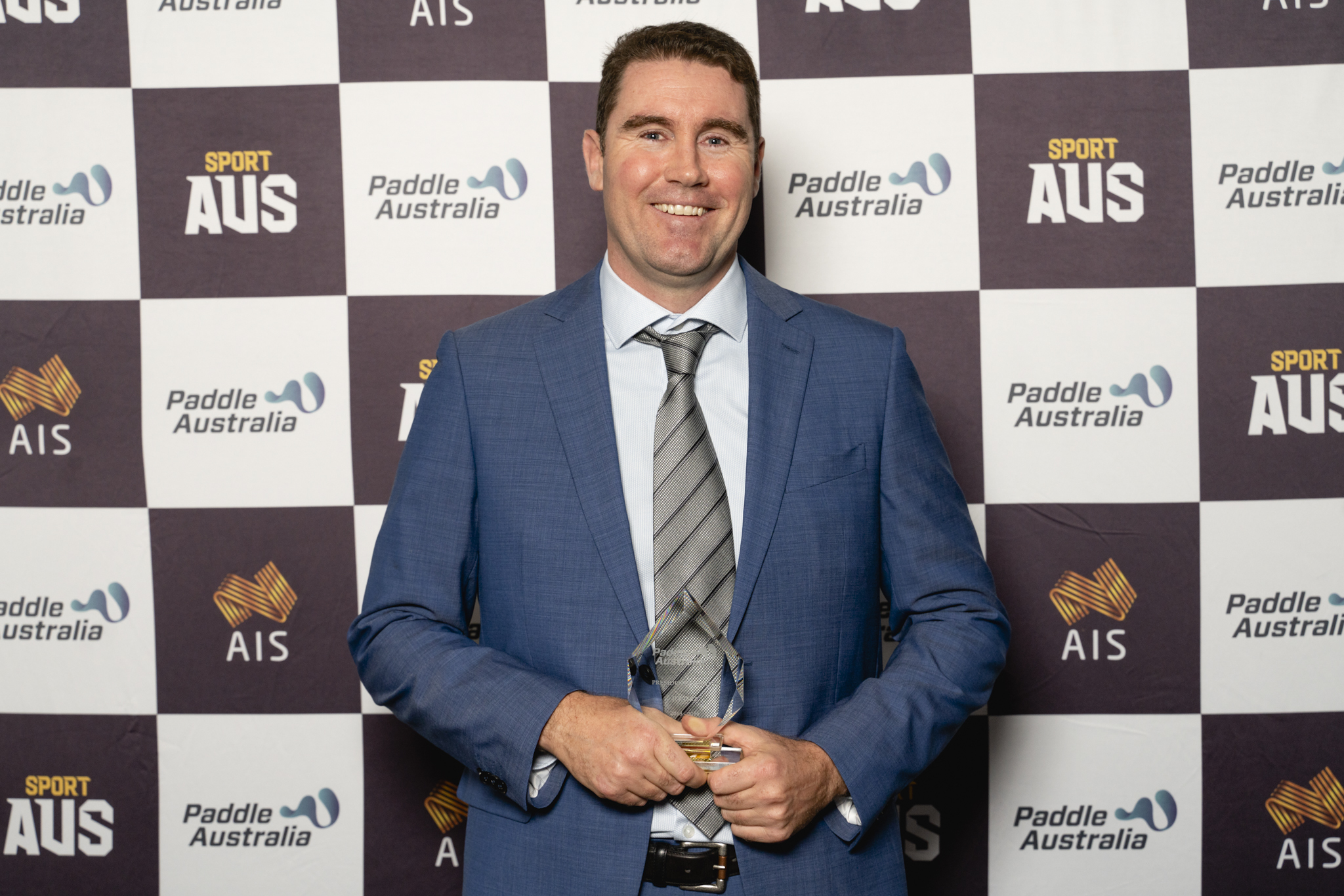 In other awards of the night, Paddle Australia’s first ever under 23 world championships wildwater medallists Georgina Collin, Madison Wilson and Demi O’Brien were recognised for their bronze medal in the women’s K1 team event with an Award of Merit. Geelong’s freestyle junior bronze medallist Jack Newland, who became Australia’s first ever junior freestyle medallist also received an Award of Merit as did Western Australian marathon paddler Doug Hodson.

Sarah Davis became the first woman to successfully lead a paddling expedition down the Nile this year and was recognised with the Olegas Truchanas award, which celebrates a canoeing trip that exemplifies the spirit of Olegas Truchanas and his passion for the natural environment. In the masters category, ccean racing world champion in the 44-49 age group Matthew Rees as well as recreational paddler Terry Bolland (WA), who completed a 1100kms expedition through Canada’s Inside Passage, were both awarded the Masters Paddler of the Year.

Victorian Graeme Caudry was recognised with the Technical Official of the Year award for his efforts as Slalom Technical Official at club, state and national events, while Tracy Gibson took home the back-to-back Instructor and Guide Of the Year Award for her efforts as a guide and specialising in sea kayaking, flatwater and surf kayaking. Ian Beasley received the Excellence Award. “Congratulations to all the winners tonight and congratulations to Paddle Australia. This has been a celebration of the breadth and depth of this sport. It is a great Australian sport and we look forward to next year and celebrating the opportunities the Olympic and Paralympic Games will bring you all in Tokyo. So good luck to all your athletes and we thank you for the work that you do,” guest and award presenter for the Paddler of the Year award, Matt Carroll, CEO of the Australian Olympic Committee commented on the evening.

Life Membership was awarded to Ian Hume and Lynn Parker.

“I think all of the award finalists and winners really represent how well Paddle Australia is performing on the world stage in every discipline and in other ways as well. Particularly Sarah’s (Davis) journey down the Nile shows us that it’s not only the competitive paddling we make great achievements in and I have also enjoyed seeing the range of ages here. Paddling is very much a sport for life,” McQuitty closed the evening.

The winners and inductees were announced at the Paddle Australia Awards dinner at the Mercure Sydney on Saturday, 9 November 2018 with Seven News Sydney’s sports journalist, presenter and reporter Jim Wilson hosting the event.

TECHNICAL OFFICIAL OF THE YEAR

INSTRUCTOR AND GUIDE OF THE YEAR