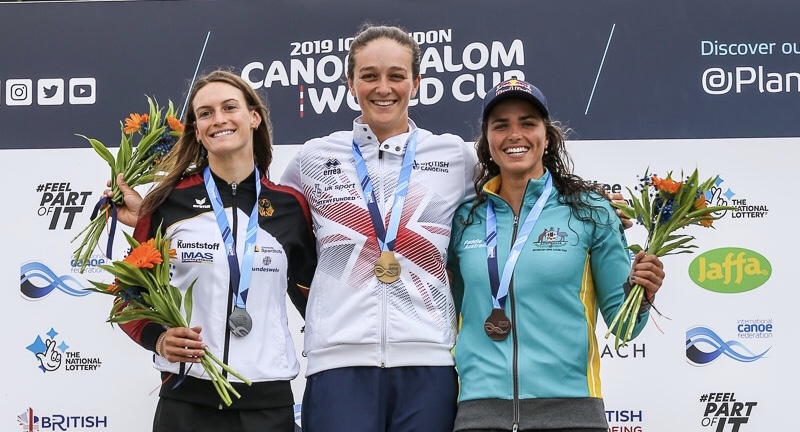 Jessica Fox has won her first World Cup medal of the 2019 season finishing third in the women’s K1 on day two of ICF Canoe Slalom World Cup 1 on Saturday.

Fox was the sole Australian representative in Saturday’s women’s K1 final after Rosalyn Lawrence and Noemie Fox missed out of the top ten  after finishing 24thand 26th in the semi-final. Ian Borrows and Daniel Watkins finished in similar positions in the men’s C1 posting a 20thand 23rd place in the semi-final.

It was a hard-earned bronze medal for three-time K1 World Champion Jessica Fox (NSW) who ran into difficulties on the challenging Lee Valley course, but still managed to finish third.

Fox qualified for the final with a second place in the morning’s semi-final, but did not have the best day on the course that saw her win Olympic silver as a teenager in 2012. 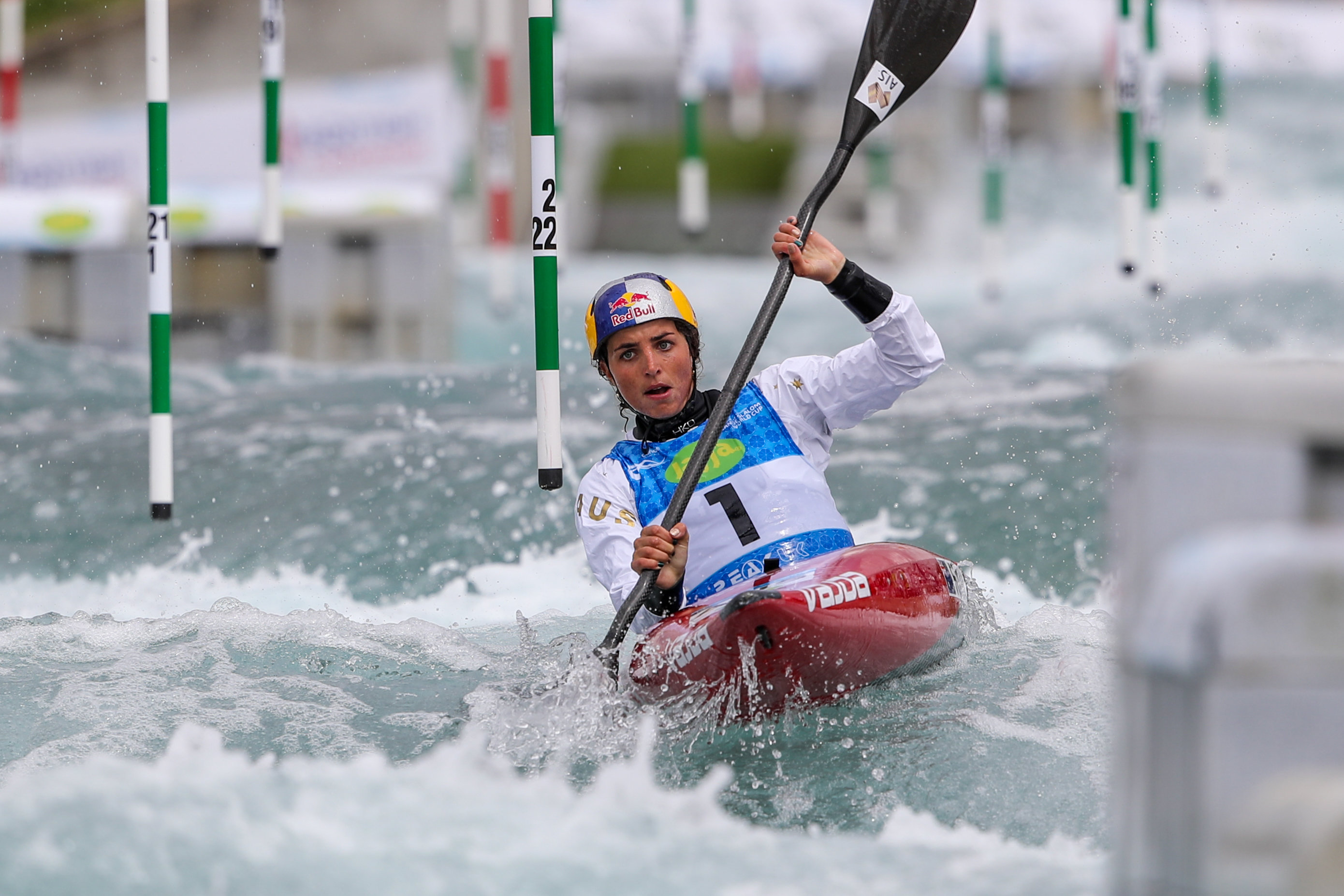 Great Britain’s Mallory Franklin took out the win on her home course in a time of 99.42 with Germany’s Ricarda Funk following 2.44 seconds behind. A touch on gate six meant a two seconds penalty for Fox who finished third and +5.97 seconds behind Franklin.

“Ricarda put down an amazing run and an amazing time and then Mallory just topped that. It’s her home course, but I had a good time racing today,” Fox acknowledged her competitors.

“The conditions are quite hard, it’s quite windy, the course itself is quite challenging with gate after gate after gate and never any breathing space and for the C1 tomorrow it will all be about keeping the flow on the boat, being tidy, being clean and I’ll focus on that now,” Fox added with the C1 semi-final on Sunday in mind.

Sister Noemie Fox, who is also doubling up in the women’s K1 and C1 events on the Senior World Cup team this year, finished 26thin her first world cup semi-final in kayak on Saturday and is looking forward to the C1 event on Sunday as well.

“This was my first semi-final in kayak. I have not done kayak on the senior circuit for a long time. I did one race in 2016, but that was it. I find it hard to double up and do both, but I was really happy with my second run yesterday (fifth),” the 22-year old said. 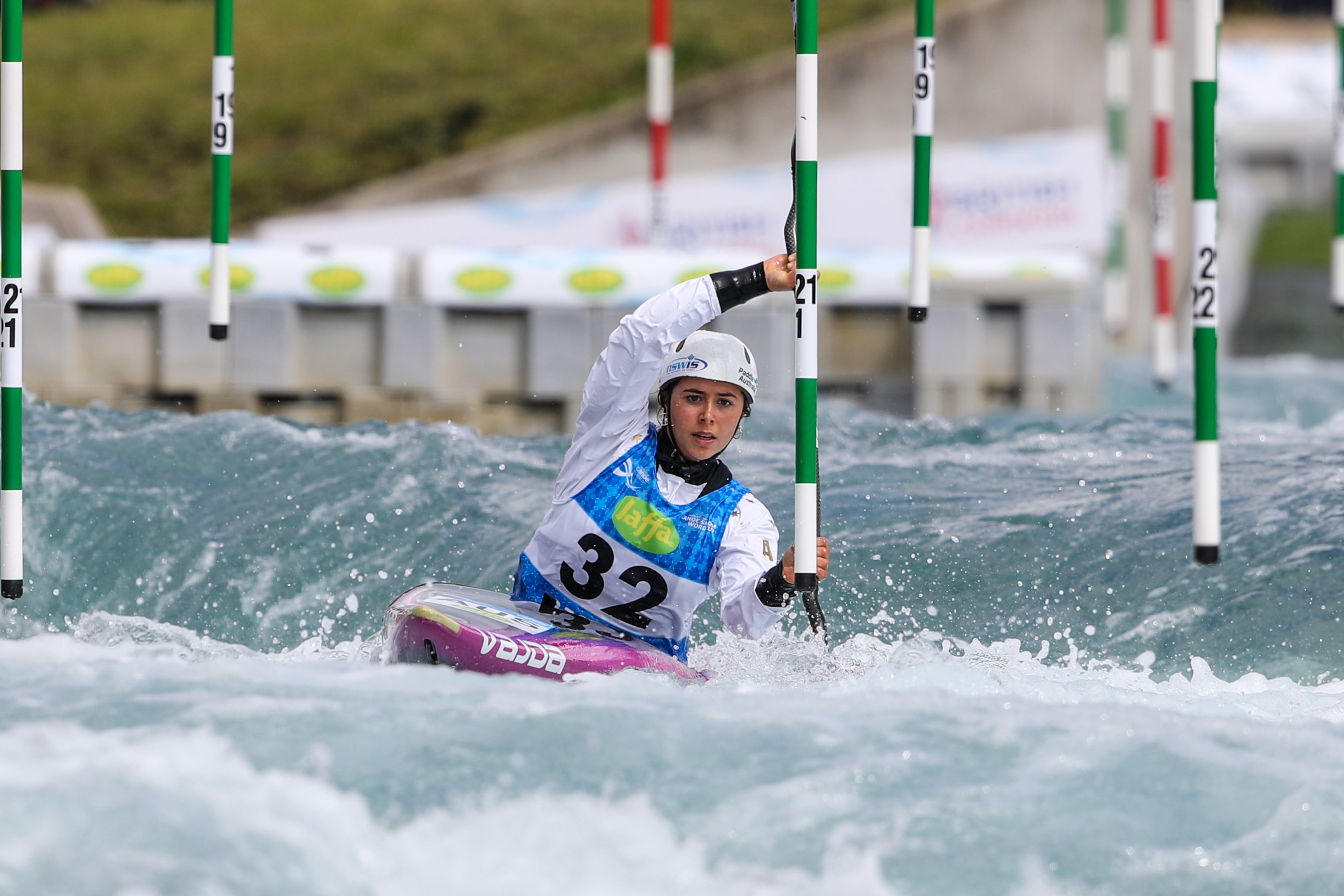 “The C1 is my main event and the one I’m looking forward to the most. It will be a tough race on this challenging course. The middle section is probably the trickiest, so there’s a lot of time to gain and a lot of time to lose. It will be a good race day tomorrow with all our three kayak guys through to the semi as well.”

Losing time was also the challenge for Rio Olympian Ian Borrows in Saturday’s semi-final of the men’s C1, who otherwise put in a clean run and was happy to start the World Cup season with a 20th place.

“The course is pretty hard out there and everyone is paddling really well and there’s not much time to be made, but you can lose a lot of time on the course and I think that’s what happened to me today. I was a little bit too heavy on the front and my ups were really slow,” Borrows reflected after the semi-final. 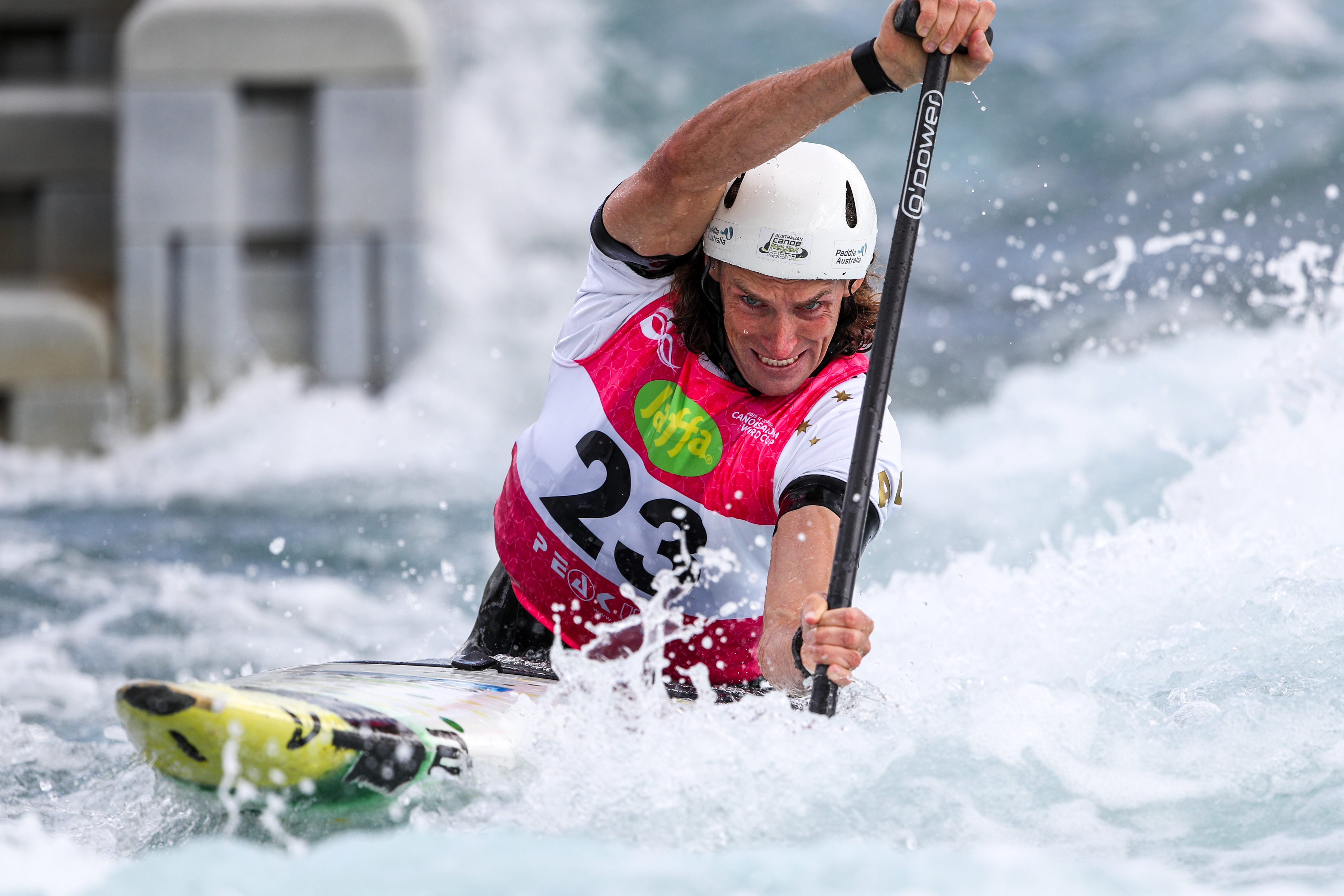 Ian Borrows – Photo Bence Vekassy
“I had a clean run and I was pretty happy with where I ended up and to finish 20th, which is not a bad start to the season. I’m looking forward to the next World Cup in Bratislava (Slovakia) next weekend and increasing that time and hopefully being in the top ten then.”
Fellow C1 paddler Daniel Watkins, who is doubling up in the C1 and K1 events, also ran into some difficulties in the semi-final, but will take his learnings into the K1 semi-final on Sunday.

“The C1 semi-final wasn’t the best run for me and I had a couple touches early on. The tail part was pretty good but then I lost a lot of time at the bottom. So it wasn’t a very fast time. But it was the first World Cup semi-final for the year so I’m just getting into the flow of racing I guess and learning how much I need to attack the run to make finals and I’ll learn for next week’s World Cup in Bratislava,” Watkins said. 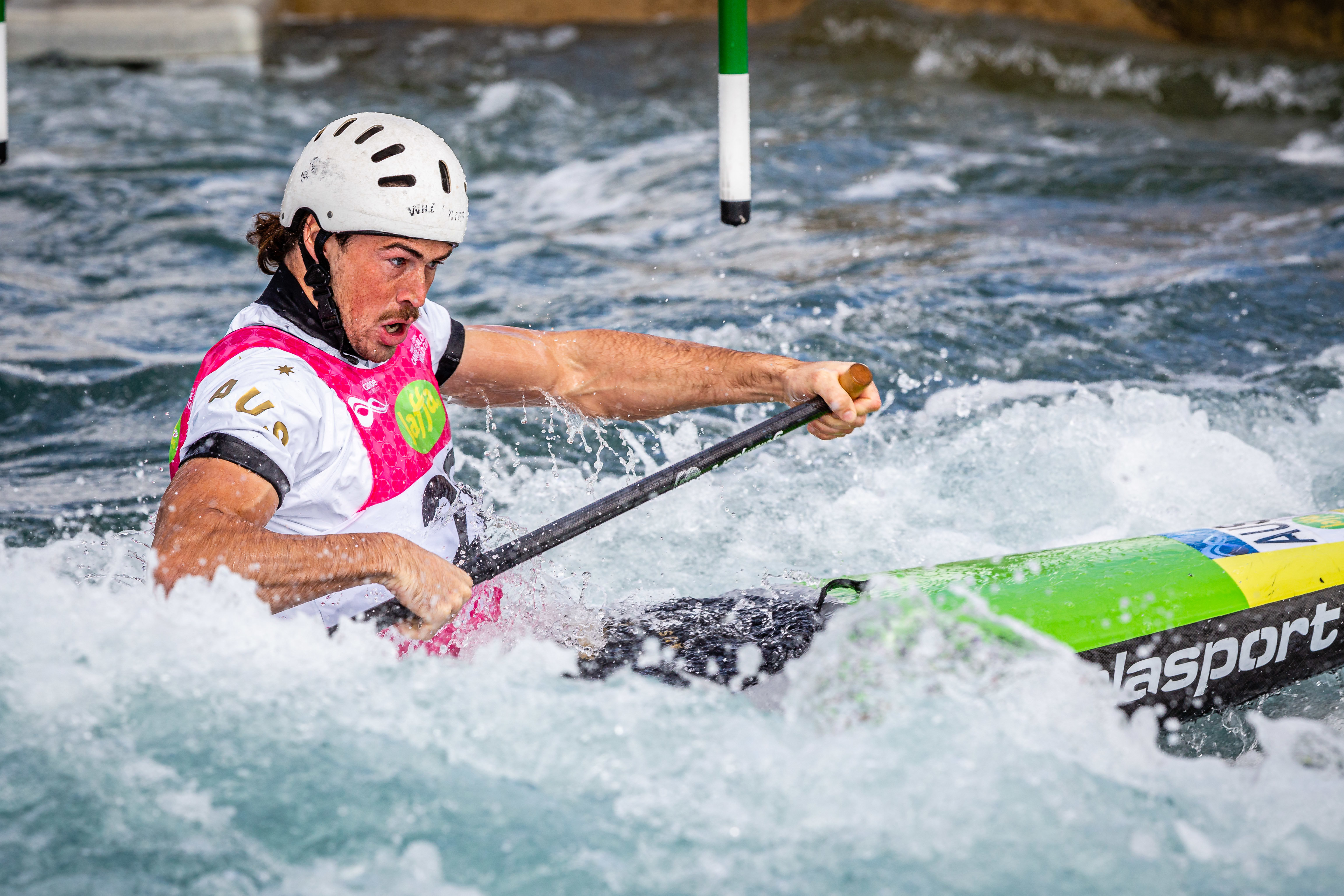 “I have the K1 semi-final tomorrow. I snug through in the first run yesterday (Friday), so I’ll be off about mid-field which is pretty good. And it’s good to have a little insight into the course paddling it in the C1 so I got a few little pointers what I can do in kayak which hopefully will help me,” Watkins added about the K1 semi-final on Sunday.

The opening ICF Canoe Slalom World Cup of the 2019 season continues on Sunday with semi-finals and finals in the women’s C1 and the men’s K1.

Lee Valley is the first of four World Cups, followed by a World Cup final. The circuit continues in Bratislava, Slovakia and Ljubljana, Slovenia the following weekends.