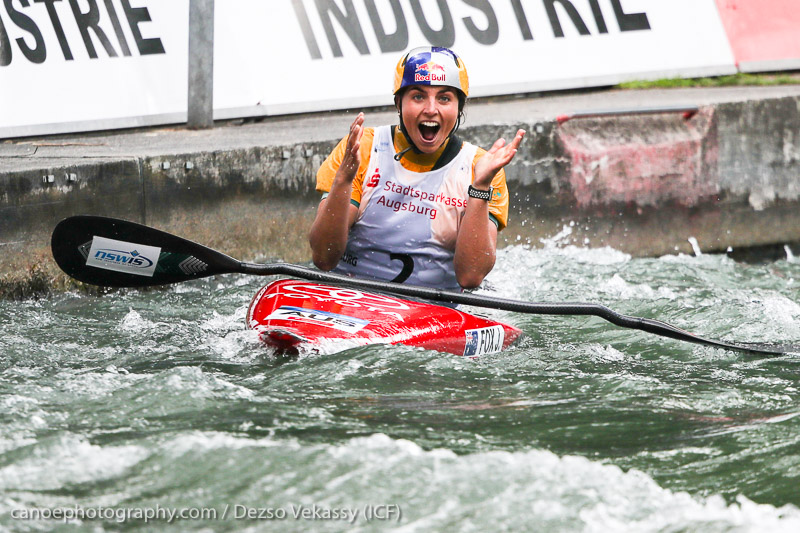 Fox has had an unprecedented run this World Cup season and has been unbeaten in both the women’s C1 and K1. After a short break and training camps since the last World Cup in Augsburg at the start of June, Fox will be aiming to continue her winning streak at the fourth World Cup of the season and with only one week to go the World Cup Final in La Seu d’Urgell, Spain next weekend (7-9 September).

Fox’s unbeaten World Cup run started with the K1 and C1 golden double at the opening World Cup of the season in Liptovsky Mikulas, Slovakia (22-24 June). She then repeated the impressive performance a week later in Krakow, Poland (29 June-1 July). Another week later, Fox made it a triple consecutive double gold after once again winning both the women’s K1 and C1 in Augsburg (6-8 June).

Tokyo 2020 is still a long way off, but after a K1 silver and bronze at the past two Olympics, and with the debut of the C1 at the next Games, Fox is already eying off the prospect of making history.

“I’ve had an amazing run over the first three World Cups. We are two years out and the Tokyo clock is ticking, so I really want to make every race count and learn each time I sit on the start line,” Fox said.

Not only has Fox been winning every single World Cup event this season, but she has also been clocking some of the fastest times. “I think my K1 race in Augsburg was one of my best runs ever and I can’t believe, it’s been such an incredible start to the season. I know last year Ricarda (Funk, Germany) won three gold medals and I was three times second, so to get up on that and stop these times is wonderful.”

Rosalyn Lawrence (NSW), who had a couple podium finishes at the recent ICF Canoe Slalom Ranking events in Vienna and Prague will also double up in the women’s K1 and C1, while U23-World Championships paddler Demelza Wall (TAS/WA) will contest the C1. Tacen is the fourth out of five ICF Canoe Slalom World Cup this season, with the series culminating in the world cup final in La Seu, Spain next week, 7 – 9 September 2018.

This year’s World Championships will return to the Olympic course in Rio de Janeiro, Brazil (25-30 September 2018).