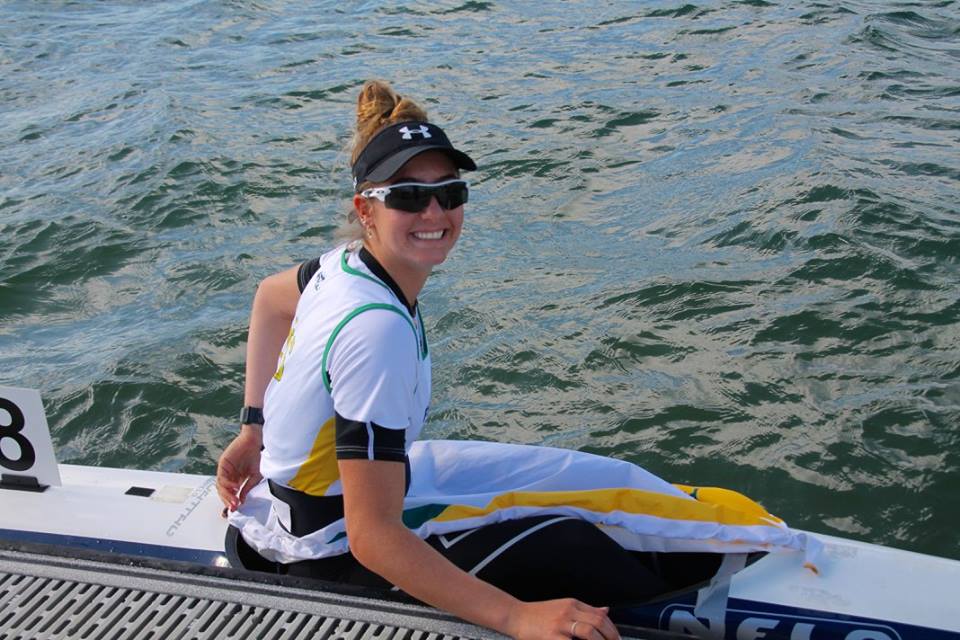 Copy thanks to AOC: http://corporate.olympics.com.au/news/massie-grateful-to-represent-australia-at-buenos-aires-2018
BUENOS AIRES 2018: Kayaking is a sport broken up in to two disciplines with athletes competing in either the speed of sprint or the obstacle of slalom. But for a spot at the Buenos Aires 2018 Youth Olympic Games (YOG), Jenaya Massie needed to excel in both.

Sixteen-year-old Massie has been selected as the sole representative to compete in both the kayak sprint and slalom at YOG in Argentina in October.

To secure the quota for the Oceania region at the World Youth qualifying event in Spain, Massie needed to compete in both the head-to-head sprint, and the head-to-head obstacle course on flat water, showing the true versatility and dedication of Australia’s Youth Olympian.

“I am extremely honoured to be the sole representative for Australia in the kayak sprint and slalom, though it’s a little bit scary being the only athlete representing your sport,” Massie said.

“When I found out that I made the Team I was completely stoked. I just couldn’t believe that I was going to be a Junior Olympian at the age of 16.

“It is such a privilege to represent your country, but to be part of an Olympic Team is the ultimate pinnacle and goal for any sports person. I am so excited, I can’t wait to be there.”

You could be forgiven for thinking that for someone so young, having such an honour bestowed upon you could incite feelings of anxiety, but the Sunshine Coast teen takes the double-pressure in her stride.

“My background is in kayak sprint, so I am in my comfort zone racing here, however, years of racing in Surf Life Saving has prepared me well for the slalom. I really enjoy the racing format because it’s totally new to me. The ramp start and the eskimo roll is my favourite aspect of the slalom.”

From the beginning, the Queenslander believes her love of the water was destined to be.

She said that as a Nipper in SLS, she was terrified of the water, but her father Ashley Massie taught her to respect and understand the ocean.

Ashley was an Australian Junior Ironman Champion and runner up Open Ironman Champion to Darren Mercer. He was also the winner of the Australian Open Men’s Double Ski with former Australian Kayak Olympian, Clint Robinson. All this considered, being able to dominate in the water was bound to run in Jenaya’s blood.

“Dad was lucky enough to compete in the Nutri Grain Ironman series during the era of surf dominated by Trevor Hendy and the Mercer brothers. I started as a Nipper at the age of six at Maroochydore SLS Club and have been fortunate to train alongside and meet many of these Australian Olympians and legends of surf.

“I swim under Janelle Pallister (nee Elford) who is also an Australian Olympian in the pool and my kayak coach is Shane Dalziel, World Marathon Kayak Champion.

“I have been incredibly blessed to have these amazing athletes in my life, which I think, makes you who you are at the end of the day,” she said.

Speaking with wisdom beyond her years, some may forget that Massie is still a school-girl with responsibilities the same as any other teen.

“The balance is tricky with school, but school work has always been given first priority. I have pretty good time management and organisational skills, so that really helps with keeping on top of school work and balancing training and school life.

“My school have been really supportive with my training too, so it all helps. [Rio 2016 Olympian] Alyce Burnett is a great role model and mentor that I admire. She manages kayak, ski and university, so no excuses!”