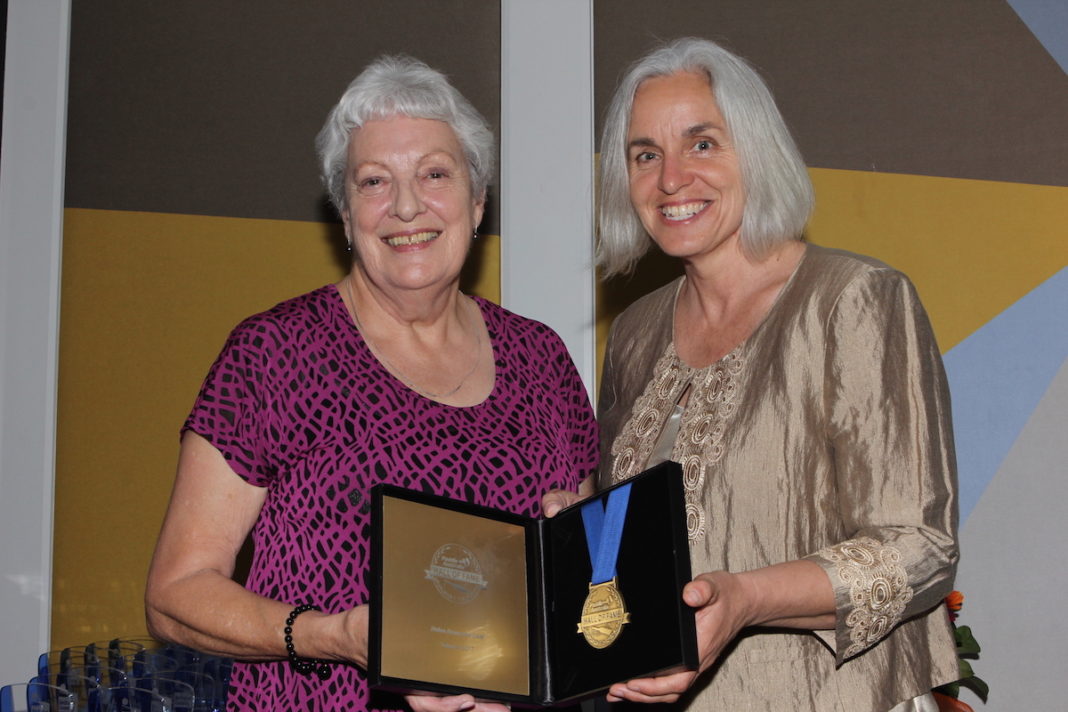 The Paddle Australia Board, management, staff and the entire paddling community congratulate Helen Brownlee, who has been has been awarded a Member of the Order of Australia (AM) in the Queen’s Birthday Honours announced today (Monday, 11 June 2018). This honour follows the Order of Australia Medal (OAM) Helen was awarded in 1985 for services to canoeing.

“Congratulations to Helen on this wonderful and much deserved recognition for her extraordinary achievements and contributions to paddle sports and sport in general in Australia and internationally,” Andrea McQuitty, President of Paddle Australia’s said.

President of the Australian Olympic Committee, John Coates congratulated Brownlee “for her remarkable contribution to sport” in an AOC media release, saying that “To this date Helen continues to devote herself to sport as an administrator at every level. She holds multiple significant posts within the world of canoeing, a sport to which she has devoted herself over a lifetime.”

“Right now, she is in Samoa where she continues to work tirelessly for the Oceania National Olympic Committee furthering women’s sport in our region. We are delighted that on top of the OAM she was awarded in 1985 she has been further recognised for her commitment to sport and particularly to athlete wellbeing.”

Helen says the honour was unexpected given she loves what she does.

“It’s been such a great pleasure to have worked with so many wonderful people over the years, you don’t think about receiving this type of recognition,” she said.

“There have been so many highlights, but getting the funding for the canoe slalom course so we could hold this event in Sydney 2000 was certainly one of the great challenges. If the money didn’t come through, it wouldn’t have been on the programme.”

Brownlee started in competitive canoeing as a teenager under the guidance of her father Os Brownlee, who was one of the founding members of Australian Canoeing. Her paddling took her from river touring to sprint competition and to slalom and wildwater disciplines. She won medals at state, national and international events, including Australia’s first international slalom medal.

Brownlee was a judge at the 1972 Munich and 1988 Seoul Olympic Games and a member of the competition jury at the 1992, 1996 and 2000 Olympic Games. A ground breaker for women in sports administration, she worked her way up to become President of the Australian Canoe Federation, a position she held for 14 years, and was given Life Membership. She has recently retired as the President of the Oceania Canoe Association and a Director of the International Canoe Federation but continues her work as Chair of the Oceania National Olympic Committee’s Women and Sport Commission.

Shortly before being inducted into The Sport Australia Hall of Fame in 2015 Brownlee was awarded the Olympic Order for her significant contribution to world sport and her dedication to upholding the Olympic ideals. The President of the International Olympic Committee, Thomas Bach, presented it to her during the Oceania National Olympic Committee’s general assembly in Fiji. A strong advocate for the involvement of more women in sport, in 2002 she was awarded the IOC Women and Sport Trophy of Oceania in recognition of her outstanding contribution to the promotion of women in sport.

“It is just amazing to see our athletes go beyond themselves to achieve success and I think that is what we are all working for and we are hoping that they will get there. Sometimes we have to share disappointments as well but to see them rise up as we have seen them do and then overcome that with determination makes me feel very proud of what we are doing for our young people and for the sport,” Brownlee said in her Paddle Australia Hall of Fame induction speech.