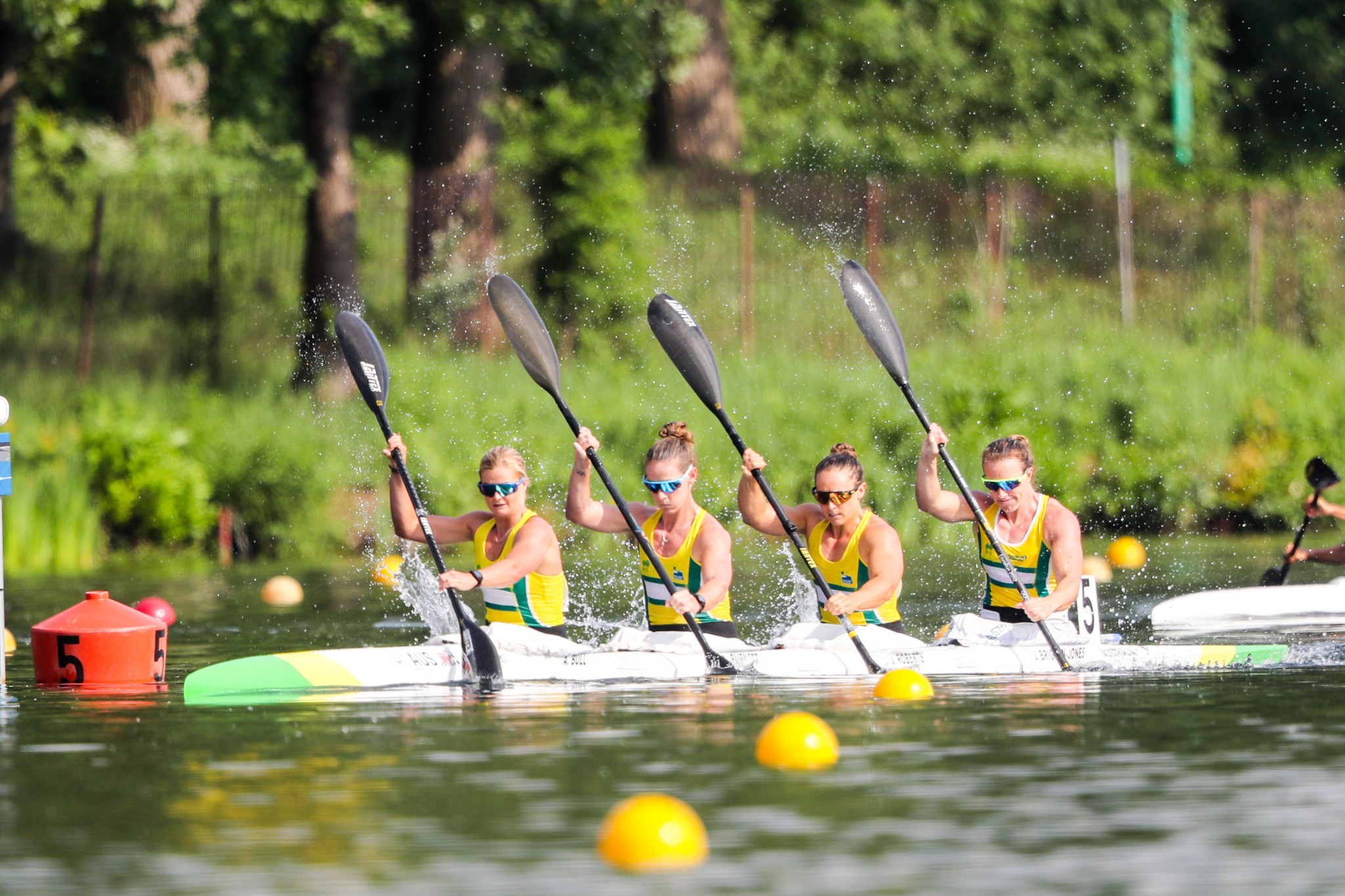 The K4 spearheads a strong Australian women’s team that also includes South Australians Cat McArthur and Josephine Bulmer. Cat McArthur won her first Senior international medal at the ICF Sprint World Cup in Duisburg (26 May) in the K1 1000m, while 21-year old Josie Bulmer made her first ever Senior final in C1 200 with the boat class to premier at the Olympic program in Tokyo 2020.

Alyce Burnett, Alyssa Bull and Jaime Roberts all paddled together in 2017, and for this year’s World Cup season they added experienced Olympian Jo Brigden-Jones with the team adding a fifth place at the World Cup in Duisburg.

“We’ve been focussing on the K4 this World Cup season and it has paid off. We decided after nationals to give the K4 a red hot crack, but to be honest it first didn’t gel as well together quite the way we expected and we had to go right back to the basics, but we couldn’t be happier how it all penned out. To come away with a silver in Szeged was more than we expected and the 1:30 topped it off,” Alyce Burnett said.

“We are still a new crew and still have things to work on, but we proved to ourselves that we have the ability and it’s a great building block for next year (Olympic qualification) and then hopefully the year after (Tokyo 2020). We want to qualify the K4 for Tokyo and to be part of that would be awesome,“ Burnett added about the confidence boosting World Cups.

Brigden-Jones, who was a member of the 2011 crew that set the previous fastest time for an Australian K4, said the World Cup results were a great start for the new crew. “The boat feels really good,” she said. “We were kind of struggling when we first got in the boat, but we knew we just had to break it down to build it back up again. The race we did in Szeged was the fastest time we’ve ever done in an Australian K4 team. It’s been awesome to paddle with the girls. I have been around for a long time (15 yrs) and I have been wondering these last few years if I have got another good international performance in me. But to come to the World Cups and step it up with these girls and to have a good building block is really exciting.”

Final boat classes for the World Championships will yet be decided for the women’s kayaking squad, who are coached by dual Olympic medallist Anna Wood and are back in Australia for a training block at the Gold Coast. The team will head back over to Europe mid-July which will mark two years to go until the Tokyo 2020 Olympic Games.

And Tokyo 2020 is what it’s all about Alyce Burnett explains, “as the female Australian team, our main goal collectively is to have the best possible result come Tokyo 2020. If that means we are needed in one boat or three boats. And personally, I rather do one boat really well than two boats medium well. At this point in time, we don’t know what boats we will finally be racing in and that’s why we were trialling a few things at the World Cups and testing the waters. But a lot of things can still change over the two years until Tokyo 2020.”

Tokyo 2020 is also on the mind of Josie Bulmer, who impressed in the women’s C1 200 and will join the World Championships kayaking team, finishing seventh in her first ever A-final on the Senior sprint circuit.

The women’s canoe classes will premier on the Olympic program in Tokyo 2020 and in her second year of international competition, 21-year old Bulmer has shown an impressive improvement in her performance.

“I’m still fairly new to this and I hopefully will keep going up and up, but everytime I get a PB it’s pretty exciting,” Bulmer said after her first Senior A-final. “I’ve knocked a few seconds off on last year and am excited to see where I’m at this year and I’m definitely feeling more confident after the two World Cups. It’s a massive learning experience and it’s good to have a lot of the older athletes around to get advice from.

And about the international women’s canoe field as a whole she added, “It’s good to see the women’s C1 squad developing so strongly and it only puts the pressure on me to get better as well. It’s exciting to be part of something new and growing. The Olympics are definitely on my mind and my goal.”

Bulmer will first race the ICF U23 Sprint World Championships in Plovdiv, Bulgaria (26-29 July), before re-joining the Senior A team.

In the men’s sprint team, Riley Fitzsimmons and Jordan Wood impressed selectors after winning two bronze medals in both the K2 1000 and K2 500 at the World Cup in Duisburg. They will be joined on the team by veteran Murray Stewart, Steve Bird, who is back after a one-year break post the Rio 2016 Olympic Games as well as team youngster Tom Green.

“Winning a couple of medals in the A finals has been great and a good stepping stone towards the World Champs in August. The main goal at the World Cups was to race everyone we can, get a lot of race practice under the belt and find consistency in our racing. The more races and pressure we can put ourselves under, the better it will be come August when it really counts at Worlds and we hope we can keep improving until then,” Riley Fitzsimmons said.

The men’s team will finish their training camp in Munich this week and head back to Australia as well. “We’re still mixing around boats and trying a few things. Once we are back home we will have a week off before getting some kms in at the Gold Coast before August.”

“I’m really optimistic in regard to the ability of our program, and where the boys are at to be able to build a strong K4 over the next two years and also over the next 12 months as we run into Olympic qualification come next year,” National Sprint Coach Jimmy Owens said.

“We’ve got a great squad and the likes of Kenny (Ken Wallace) and Lachie (Lachlan Tame) will also come back next season. They are quality athletes and Olympic medallists and everyone knows they are sitting on the backburner getting ready and getting set for a big campaign moving forward towards 2020.”

And focussing on Tokyo 2020 Owens added, “The journey to Tokyo has properly started now and we’ve come away from the World Cups with some good racing. We had a good kick-start in the men’s K4 500 with the boys doing well, Riley (Fitzsimmons) and Jordan (Wood) did a really good job in the K2 and Muzza (Murray Stewart) has been underlining his credentials by being at the front in the A-finals. Where the program for the men sits is really good and we’ve also seen some strong results in the women’s races.”

“I think the team has really stepped up over the last twelve months in terms of its positioning on the podium and the A finals. Coming away from the World Cups we will now reset and reboot in terms of where we need to get to for Worlds and that’s very important for our direction towards Tokyo 2020,” Owens added about the plans ahead.