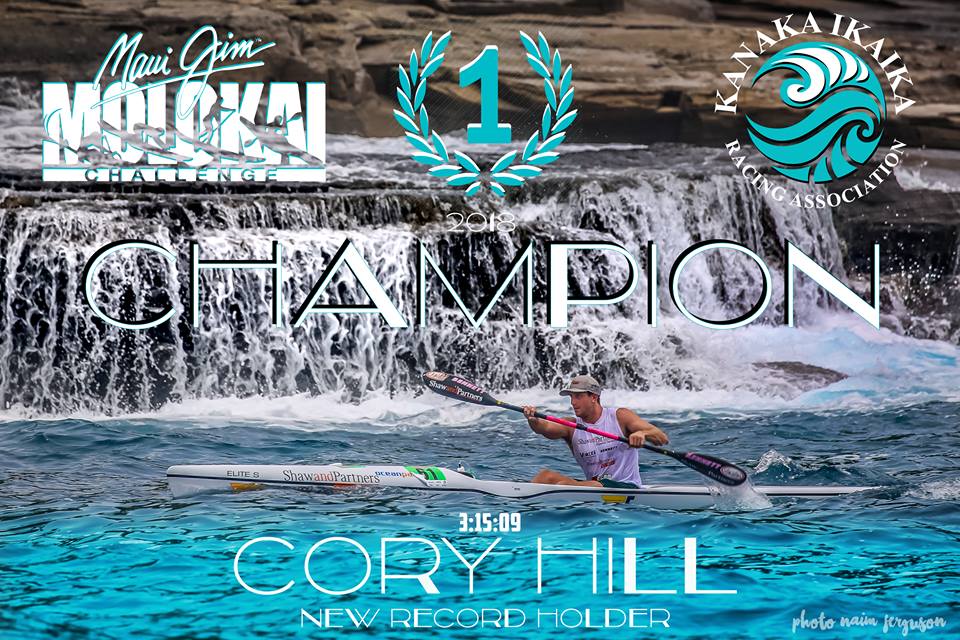 The 2017 ICF Ocean Paddling World Champion won the 2018 Maui Jim Molokai Challenge title ahead of South African duo of ICF Marathon World Champion Hank McGregor and Jasper Mocke in the 43rd edition of the event on Sunday (27 May 2018).

Hill led the fast pack into Koko Marina, crossing the finish line in 3 hours, 15 minutes and 9 seconds, just 20 seconds ahead of defending champion Hank McGregor of South Africa. It was Hill’s second victory of the 53km race — the 29-year-old finished in 3:22:17 in 2015 — and over 30 minutes faster than his 3:45:50 last year when he finished third.

The Kaiwi Channel delivered swells and favourable tide to see a record-breaking race with the top five paddlers staying under the record pace and six Australians amongst the top ten solo paddlers.

“To come in first in this race, with so much history, is something special,” said Hill, paddling in his sixth Molokai Challenge. “We had some of the greatest conditions the race has seen. The last five years all we’ve heard about is the good years, and to finally get a taste of that, to see what it is all about, is just an honour to be out in that channel”

“You’ve got 32 miles in your language and 52 kilometers in ours, it’s hectic out there. There’s always that hope in the back of your head (for a record). I knew I could do it if everything turned out right. Some of my great mates have won this race, some of my idols. I can’t wait to have a beer with my good friend Dean Gardiner and tell him how much better we are these days.”

Australian ocean paddling pioneer and nine-time Molokai champion Gardiner, 54, who set the record of 3:21:26 in 1997, was eighth overall on Sunday in 3:27.40. From his first Molokai in 1999 Gardiner has taken part in every race since and held the record for the race since 1994 lowering it again in 1997 until it was broken by Hill on Sunday.

U23 silver medallist at the 2017 ICF Ocean World Championships Mackenzie Hynard (NSW) finished overall sixth and second in the 19-29 age group in what he called his “toughest race to date.”

On social media he added: “I couldn’t be more wrapped with a sixth spot in my first Molokai crossing, definitely leaving everything I had in the channel. I hope it’s the start of many more to come. Well done to everyone that made the crossing in what were most likely the best conditions in history. A huge congrats goes to Cory, who is my best mate and training partner and who showed yet again his class taking the win and smashing the 21 year old record in the process.”

Another record was smashed in the women’s field, where Australian Nutri-Grain IronWoman Series Champion and World Paddle Board Champion Jordan Mercer completed the Australian podium success by finishing third in the women’s field in her first ocean ski race. South African Hayley Nixon and Rachel Clarke from New Zealand completed the podium with the top three women all coming in under the previous world record time.

Australian Tegan Fraser (QLD) backed up her win at the Australian Canoe Marathon Champs with a fourth place in the women’s field. Fraser will be representing Australia at the ICF World Marathon Championships in Portugal in September