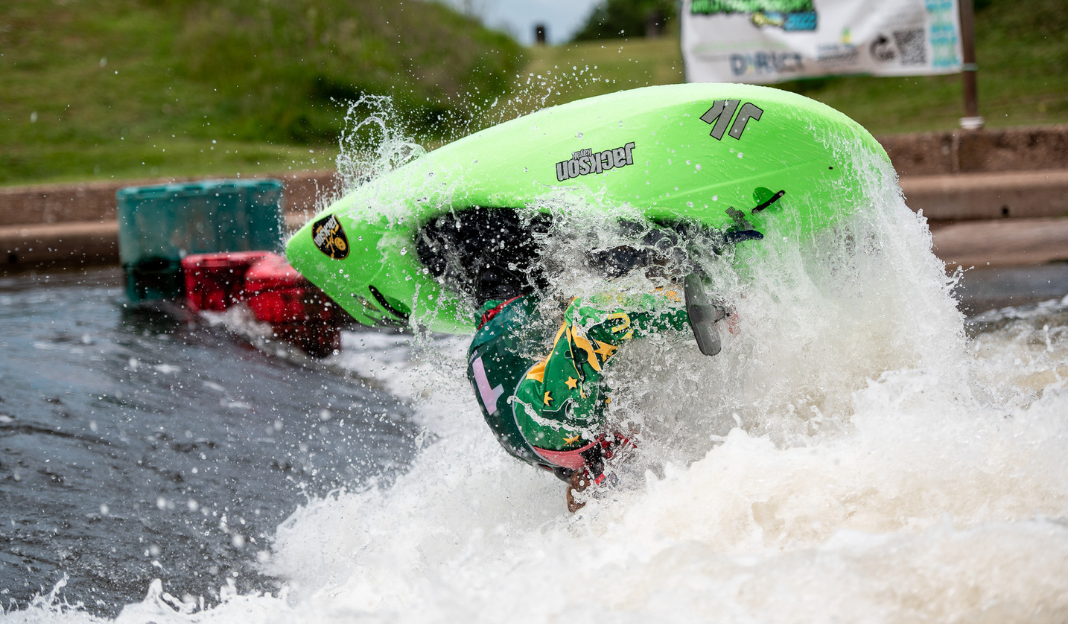 With a mixture of youth and experience in the team, the camaraderie across all three divisions was evident, highlighted by Australia securing a Masters bronze medal.

The 21-year-old placed 26th in the Men’s Kayak Surface, with a new Australian Record score of 1343.

“I am really happy with 26th, with all things considered,” Newland said.

“The pressure having come off a bronze [in 2019] was certainly there, but I had to keep in mind this was my first senior year.

“I’ve never been so happy to see who beat me, all those guys paddle everyday around the world without another full-time job like me, so I’m very pleased with the result and I feel it sets me up in a good place for future events.”

Hogbin-Bourne placed 27th in the Men’s Kayak Surface, just ahead of his teammate Cook who placed 29th.

“Joe and Alex absolutely smashed it,” Newland said. “They should both be really stoked with their efforts.

“I really enjoy coaching because I love to see other people’s progression, and it shows me how to coach more effectively.”

Hailing from Moryua on the NSW South Coast, Cook said he loved his experience in Nottingham.

“It was so much fun, I couldn’t stop smiling,” Cook said.

“I came here to have fun, so I told myself that no matter what happened, it would be alright and took the pressure off myself.”

At the same time Australia’s youngest World Championship members were tackling the course, so too were Australia’s eldest competitors in the inaugural Master’s competition.

Jack Newland’s father, Peter, just missed out on a medal, placing 4th in the Men’s 60+ division, as did Australia’s only female competitor Kate Dyachuk.

In a very close battle in the women’s 40-49 category, Dyachuk had to battle Japan’s Mumu Tani in a tie break for a spot on the podium, but narrowly missed out.

“The masters competition was a fabulous addition to the event,” he said.

“The camaraderie between the 60+ group was something wonderful to experience – egging and cheering each other on but still fiercely competitive.

“Everyone put their best in and hopefully the masters event will be a permanent fixture going forward.”