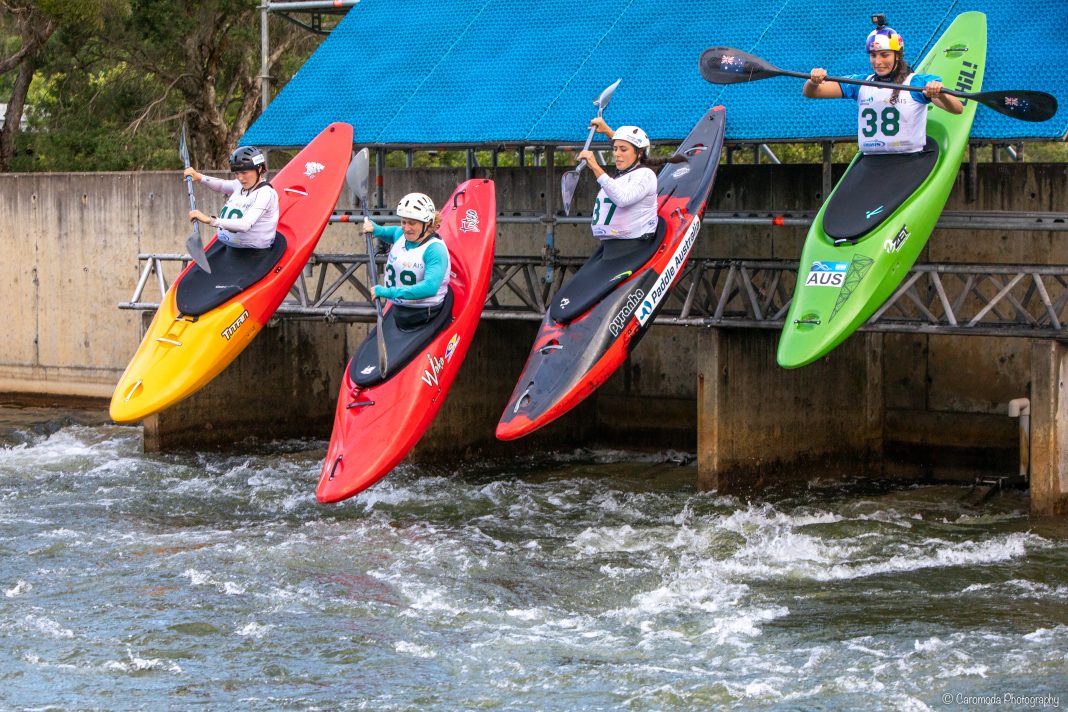 There was plenty of action at Penrith Whitewater Stadium for the final day of competition at the 2022 ICF Oceania Canoe Slalom Championships, with the C1 finals and debut races of the new Olympic discipline Extreme Canoe Slalom.

The canoe gold was the second medal of the weekend for Fox, who also won gold in the women’s kayak on Saturday.

Fox said that despite having raced the same course on both days, it was just as physically demanding in the canoe.

“It was just as long as physically challenging as it was in the kayak yesterday, but it felt better today for me in C1, especially that second run, I felt like I had really good water,” Fox said.

“I was able to attack the course a bit more, it probably helped having those two runs yesterday, but it was still just as hard on the body.

“I think the main thing for me reflecting on the weekend so far is how great it has been to be back racing.

“Taking each race as experience, and this is a selection event for us so there’s always that element of expectation and pressure.

“My goal was just to have good runs, try and challenge myself and really try to challenge the boys as well to try and get closer in time to them,” she said.

Victorian Tristan Carter was the fastest man in the men’s canoe, finishing 1.52 seconds in front of Kaylen Bassett to claim the gold medal.

Having had a nervous wait for the final results as he crossed the line, Carter said it was worth the wait for the ultimate outcome.

“I am so stoked to be walking away with a gold medal after the year we’ve had and the challenges we’ve faced,” Carter said.

“Coming in and out of lockdowns for three months, for me personally coming back from a broken hand – it was a less than ideal preparation but I’m so happy that I was able to pull out a winning run and have confidence in what I know I can do.

“I haven’t felt nerves like that around a race in a long time, it’s the first time we’ve had a proper race in almost two years now.

“We all train together, and I know how close we always are. I knew it was going to be tight because it always is, but personally I was just happy I was able to hold my nerves and pull it together when it mattered,” he said.

Rounding out the competition was the home soil debut of the new Olympic discipline Extreme Canoe Slalom.

With a new ramp installed shortly before the Oceania Championships, athletes were ready to start building their experience in the discipline which is set to join the Olympic programme in Paris 2024.

For Noemie, it was pure excitement to just be back racing in the plastic boats again.

“It feels pretty good to get the win – this is the first extreme race I’ve done since the World Championships last year,” Noemie said.

“It’s always fun to be able to race this event, especially against the current world champion in Jess (Fox).

“Extreme is one of those disciplines where the more practice you get, the more confident you get, and I’m excited to get even more experience in this type of racing,” she said.

With a silver medal in both the women’s canoe and kayak finals, and a gold in the extreme, Noemie said she was proud of her results this weekend.

“I’m pretty happy with my runs, but there’s a few improvements I need to make to close that gap to Jess,” she said.

“But it’s good to be racing, and it’s always cool to race in our own backyard at Penrith Whitewater Stadium.

“We certainly missed our Oceania friends this weekend, but we’re looking forward to welcoming them back hopefully very soon.

“I’d also just like to thank all the volunteers who braved the heat this weekend to help put on this event, and give us the opportunity to race.

“We are very grateful for your support, and without you events like this wouldn’t be possible,” she said.

The Men’s Extreme Canoe Slalom final was won by Tim Anderson, in his first ever extreme race in Penrith.

“It’s pretty awesome to get the win today, the extreme is such a new and fun event,” Anderson said.

“I’m glad I started having a crack at it, especially since it’s going to be in the Olympics in Paris.

“We’re also lucky that we have a ramp in Penrith now, and I’m hoping we can use it a lot more at training and club races too.”

“It’s important that we start getting more and more experience, and I’m looking forward to seeing where I can take my extreme racing,” he said.