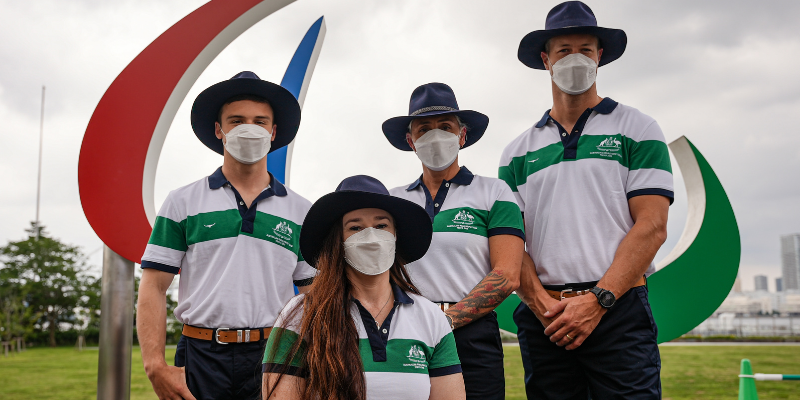 Australia’s Para-canoe team will have their opportunity to go for gold at the Tokyo Paralympic Games when competition gets underway from Thursday 2 September.

Defending Paralympic KL2 champion McGrath will come into the event as the one to beat, having won every world championship competition in both the KL2 and VL3 events since his gold medal winning performance in Rio.

With his program doubling at these Games since the inclusion of the Va’a, McGrath said he has a solid plan in place to manage his increased load.

“Thursday’s heats are racing both boats so that is just a manner of getting them done and then Friday is just the Kayak. What I plan to do is race and then cool down in the Va’a, that way I will get a bit more time in it,” he said.

With McGrath unbeaten since he won his gold in Rio, he knows all eyes will be on him. But he is well aware of where the competition will be coming from.

“In my Kayak which is first, I have really hot competition from an Italian Fernando Manchella, he has a really amazing start…so will come out of the gates quite fast. Scott Martlew from New Zealand will have a pretty good race, he looks really strong, a lot stronger than in Rio. HE is a similar racer to me, a little bit faster at the start but a strong finish. Another one who won the World Cup is the ‘Iron Cowboy’ Fernando de Rufino from Brazil, he is a big lad and another one to watch.

“In the V1,Caio (Ribeiro de Carvalho) from Brazil will be tough, he had an injury from a couple of months ago he was in a car crash so he is still recovering from that and we will just have to see how he presents. A really strong contender from the UK is Stewart Wood and he has been right on my tail for the last couple of years when we have raced internationally. There is a new guy who has come out of the woodwork this year at the World Cups, Adrian (Mosquera). He is one to watch. It is really tight in that class we are all within a foot of each other.”

Despite McGrath and his team mates not being able to race or prepare internationally since the COVID-19 pandemic, he said it’s about not letting the pressure get to him and trusting his processes.

“I have waves of no pressure but more nerves of trying to come to terms with what I achieved in Rio and trying to back that up here and what I am doing to mitigate that is that I haven’t been beaten since Rio. The closer I get now the more confident I become in my ability. I am probably the opposite to most people in that I was really nervous a long time ago and getting here was part of the journey and the struggle so now we are here and we can see the paddlers out on the lake and it is nice to get out and be amongst it all.

Australia’s other men’s competitor will be NSW based Paralympian Dylan Littlehales, who has big aspirations in the KL3 classification. He said the Sea Forest Waterway venue and hot weather in Tokyo will be all things to factor into his race plan.

“It is an interesting venue, Japan has done very well with what they have got, they have blocked off a section of the harbour they have put loads of buoys out there, even though there are very high winds around there is even a wind turbine they have managed to keep the water relatively flat and that is a big bonus.

“I think out of my competitors I am someone who races a lot better with a strong tail wind, I think I am getting better in a head wind now and especially with a cross wind coming across the boat.

“I have had a better lead-in than a lot of people. There are a few athletes who have had some very hard roads to get to the Paralympics.

“Serhii (Yemeliano) is the World Champion and hasn’t been beaten in five years. The last time I raced him was in 2019… but I’m a few years older now, getting quicker in time and there is some technology in my boat that I think will hopefully make it a race between two of us and hopefully I can pull away from him. Leonid Krylov (RPC) is still up there with his times, and although Brazil and Robert (GBR) haven’t had the greatest lead-in they are two blokes that have been around for a long time and know how to get a result,” he said.

Littlehales is hoping the technology improvements he’s been able to make to his boat will better support him during his second Paralympic Games campaign.

“I have a discrepancy in my leg length, my right leg is a bit shorter than my left. I have to build out the right side of my foot plate to be able to leg drive, which was originally just a bit of a DIY with some foam and plywood that we did ourselves.

“But after the 2019 season I had some steering issues, I managed to secure some funding through the Paralympic Equipment Fund which allowed me to get a proper one done by the person who does my shoe orthotics as well,” he said.

In the women’s events, Rio silver medallist AJ Jennings returns in the KL3 classification, relishing being back part of the broader Australian Paralympic Team.

“It is great to be back in amongst the mob, I think we get quite isolated especially being in lockdown when we are home so to be a part of the team again and with the other sports is fantastic.

“The delay due to COVID-19 hasn’t been too bad, we have different training patterns so we were accommodated to do our training and there really wasn’t any time when we were off the water. Paddle Australia have been fantastic with the gym and everything else… they just kept the ball rolling. The extra 12 months was good in a way as it helped me get through some injuries and to put the finishing touches on,” she said.

Crediting paddling for giving her a new lease on life, Jennings is part of the ICF Athletes Commission and committed to seeing the sport grow. She’s especially excited to see the Va’a part of the program increasing the number of athletes who can compete at the Paralympics

“It is fantastic because the more paddlers we get the more classes we can have and the more diversity we can have within the sport, which is looking really healthy. The new Va’a being brought in for this Paralympic Games and hopefully for Paris we will have the KL3 women’s as well to bring up equality for male and female athletes, Para-canoe is a new sport that is hopefully going to keep growing as years go by.”

Rio bronze medallist Susan Seipel is hoping to add to her medal collection, Tokyo giving her the opportunity to compete in both the kayak and Va’a events. She is determined to use her first experience at a Paralympic Games to propel her to success in Tokyo.

“I think I have learnt a whole lot since Rio. This time around I know what to expect and so I didn’t really have high expectations because sometimes you can be disappointed if you expect everything to be perfect. I am feeling really calm and happy about the whole thing and very grateful that we got here and we are finally here. I’m feeling really good about my second Games,” she said.

The squad has been preparing for the conditions they are likely to face in Tokyo, using acclimatisation techniques to prepare them for the hot Tokyo weather.

“We did a little bit of heat tent work a bit earlier in the season and getting towards Tokyo we did some hot spas. It sounds nice but they aren’t as nice as they sound, actually they aren’t nice at all – 30 minutes in a 40 degree spa is not fun at all. But it seems like it has been working and obviously we have gone through cooling strategies that we might use while we are here like slushies and ice vests and stuff like that and we have practiced all of that.”

“I think I was more excited watching those guys doing it and especially Jess Fox, she is a legend of our sport and it was so awesome to see her finally get the gold. On the sprint side we train with most of those guys and they all came up to the Gold Coast to train together so it was really good to see them do really well. Of course Tom and Jean getting gold was incredible, I loved watching them and it is a huge inspiration for us now,” she said.