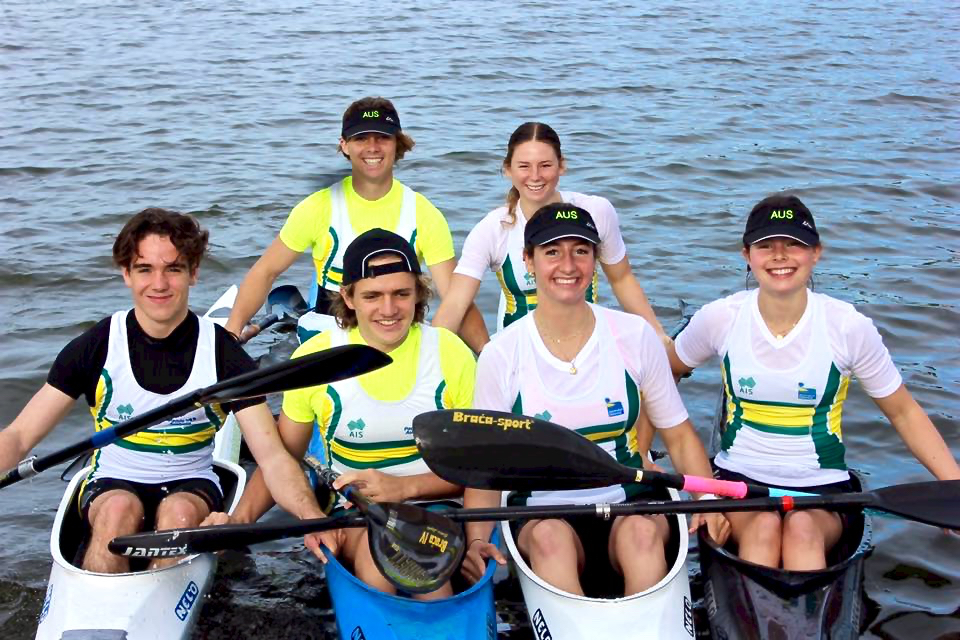 Olympic champion and three time Olympian Ken Wallace (QLD) as well as Rio 2016 Olympian Alyce Burnett (QLD) are spearheading this year’s Australian team to contest the 2018 Sprint Olympic Hopes Regatta in Poznan, Poland this weekend – not as athletes though, but as coaches (14 – 16 September 2018).

The Olympic Hopes regatta is recognised as one of the pinnacle International Canoe Sprint events for athletes, who are under 15, 16 and 17 of age.

The event will see some of the best young sprint paddlers in the world, representing over 30 countries and will be providing an exceptional high-level competition for Australia’s up and coming canoe sprint talent.

Australia will be contesting the event with a young team of six paddlers, who are all under 16 years of age and have another year of Olympic Hopes as well as Junior Team opportunities left in the years to come. They were selected following their outstanding results at the Asia Pacific Regatta in Adelaide in May and throughout the most recent domestic season.

Wallace and Burnett have ‘changed hats’ for the event and have been enjoying the experience of coaching Australia’s future talent.

“It’s my first time coaching an Australian Team and I’ve really enjoyed this experience. It’s been really rewarding to have a bunch of Juniors with us and I love helping out and love seeing the guys grow. I’m looking forward to watching them race,” Alyce Burnett said.

“It’s really exciting to see these guys and girls come through the ranks and putting on the green and gold is something that not many experiences can top. I hope they learn a little bit from us and they can teach us a lot of things as well.”

Ken Wallace, who is aiming for his fourth Olympic Games in Tokyo 2020, is also enjoying the experience.

“Coaching such young and enthusiastic kids and to give them some of the dos and don’ts of racing has been really enjoyable.

“It’s exciting to see the young kids putting on the green and gold for the first time and come tearing down the course, trying their hardest to make it through the semis and into the finals.

“It’s exciting to watch and it reminds me of when I was younger and I get goose bumps just thinking about it. I wish I was as young as them so I could do it all again,” Ken Wallace said. While Wallace already has three Olympic Games under his belt, coaching the young athletes even makes 26-year old Burnett feel old: “I used to have the nickname Junior on the team and I’m definitely not the junior anymore.”

Racing will take place on the Poznan flat-water course that also hosted the 2010 Canoe Sprint World Championships and will be hosting a Sprint World Cup again next year.

“I’ve got really good memories from here. It was 2010 and it was my first time for world champs – fresh eighteen and first time on the senior team and this is one of my favourite courses to come back to and I’m really excited for the team to race here.”

And Wallace added, “I’ve done some of the fastest times I’ve ever done here on this course. It’s a fast track and it’s an impressive place.”

“This is a great opportunity for the our up and coming youth athletes to learn from experienced paddlers like Kenny and Alyce and it’s part of our pathways strategy to continue involving our Olympians in coaching our Olympic Hopes Team.”

“I think, it’s a great motivation for the current team as well as for our young developing athletes in our pathway and gives them something to strive for next year.”

But it also works the other way around and both Wallace and Burnett appreciate the opportunity given to switch roles and work with the Olympic hopefuls of the future.

“Quite often we get stuck in our little bubble and an experiences like this makes us a better paddler as well,” Burnett said.

“We are still athletes ourselves and I’m still learning too. At the moment we stop learning we should give up the sport and this experience helps me learn as well,” Wallace agreed.

Racing will kick-off in Poznan on Friday, 4 September with Australia’s team of six athletes contesting different events in the K1 and K2s.

“I’m feeling really good for this regatta. We’ve definitely done the preparation at home and here with Kenny and Alyce, who are both Olympians and know everything they are talking about” Jenaya Massie said.

It’s a big month for Massie, who will also be competing at the Youth Olympic Games in Argentina at the beginning of October.

“I’m definitely using this event to race my hardest and hopefully it will be a podium finish with Phoebe in the K2. But I’ll also be able to see how all the other girls are going and where I’m sitting at in the flat-water racing.”

All girls will be racing the K1 with Jenaya Massie also teaming up with Phoebe Wills-Grace in the K2.

“We’re really excited and want to make the final and hopefully also the podium. We’ve done a lot of training and trained very hard for this so hopefully it pays off,” Phoebe Wills-Grace said.

Fletcher Armstrong (NSW) and Jarrah Sheppard (NSW) are returners to the Olympic Hope team, while it is the first time on the team for Lincoln Loughry (SA).

“I’m pretty stoked to put on the Australian uniform, the green and gold. I’ve been trying to cope with the jetlag but quickly got over that during training and we’re ready to race,” Lincoln Loughry said.

It is the second time at an Olympic Hope Regatta for Jarrah Sheppard and he learnt a lot in his first year.

“I’ve learnt that you need to pace yourself to make it through the heats, semis and finals. It’s not my first time, but I still certainly excited and green and gold is always super cool.”

And about the preparation he added,

“We’ve been training the past week over here and put in some really good finishing touches in the K2s and working out the team crews. We’ve worked out that I’m probably better in the front with Lincoln and sit in the back for the 1000 with Fletcher.”

Fletcher Armstrong will be racing different events across the 200, 500 and 1000.

“We are probably expected to go well in the 1000, which is one of the main focuses for this weekend. And the 200 is my main event so I’m looking to make the final for that and see how I go against the big boys,” Armstrong said about the goals ahead.