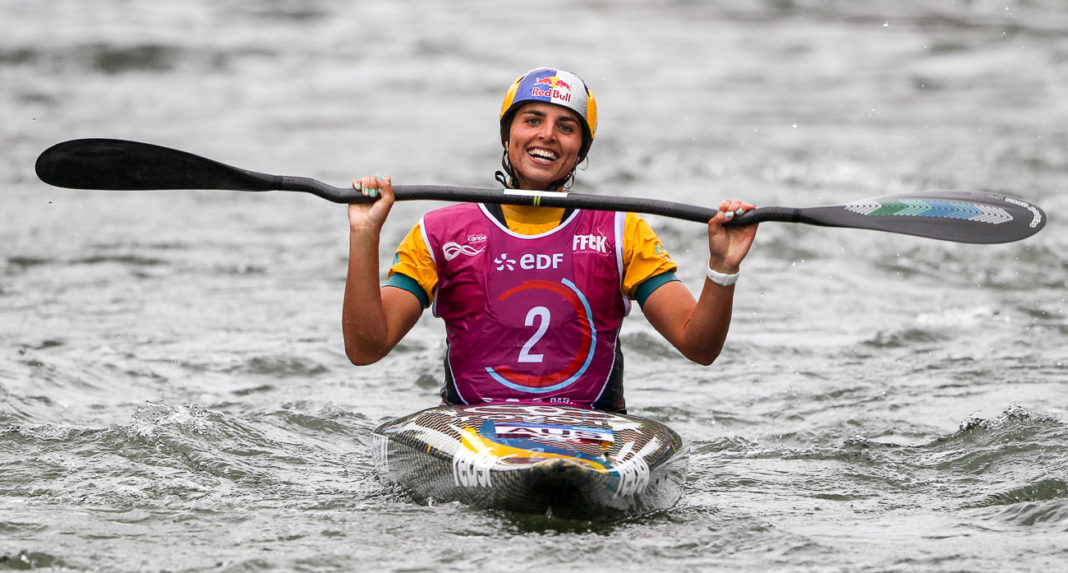 Olympic medallist and 2017 Canoe Slalom World Champion in the women’s K1 Jessica Fox (NSW) took home the Canoeist of the Year Award, while Paralympic champion and 2017 dual World Champion Curtis McGrath was awarded the Paracanoeist of the Year Award at the Australian Canoeing 2017 Annual Awards held on the Gold Coast on Saturday (4 November 2017).

2017 Canoeist of the Year Jessica Fox had another outstanding season winning a total of 13 individual medals and three team medals in the women’s C1 and K1 events at the 2017 World Cups and World Championships and wrapped up her year with the World Champion title in the K1 at the recent ICF Slalom World Championships in Pau, France.

Together with sister Noemi Fox (NSW) and Kate Eckhardt (TAS) she was also a finalist for the Team of the Year Award, which went to the men’s K4 1000m crew of Ken Wallace (QLD), Jordan Wood (QLD), Murray Stewart (NSW) and Riley Fitzsimmons (NSW). The Australian men’s K4 were recognised for their outstanding international season, which culminated in the 2017 World Championship title.

“It’s a big honour receiving this award. We had some great results in the slalom and for me it’s been a fantastic season in my individual races and also in the team races with the other girls Kate (Eckhardt), Noemi (Fox) and Ros (Lawrence). But it’s been an amazing year in the sport as a whole and also in sprint, paracanoe and marathon there were some amazing results, so to win this I’m really honoured and humbled,” Jess Fox said at the end of the awards night.

“Curt McGrath I thought would have it, so I’m very happy and thank you to Australian Canoeing and the coaches, the program as well as the Australian Institute of Sport that these awards and who support our sport,” Fox added.

For Curtis McGrath, who was not able to attend in person, it was the third time in a row to receive the coveted Paralympic honour after he took home both the Canoeist of the Year and Paracanoeist of the Year award in 2016. The Queenslander and Sydney 2018 Invictus Games ambassador followed up on his Rio 2016 Paralympic gold medal by wining both the K1 and V1 paracanoe events at the 2017 ICF Paracanoe World Championships in Racice, Czech Republic in August.

Fellow Paralympian Dylan Littlehales (NSW) won the Junior Canoeist of the Year Award. Dylan, who only just turned 18 last week, has been competing in the paracanoeing senior class, where he finished fifth in the men’s KL3 200m at the 2017 ICF Paracanoe World Championships.

“It’s a huge honour to receive this award. I competed against the Junior athletes not only in the paracanoe, but also in the Olympic class and everyone is at a high level, so getting this award feels incredible,” Dylan Littlehales said after receiving the award. And making his ambitions for the future clear, he added: “It’s great to train with the likes of Curtis, who is a great athlete and the goal I had ever since I started competing is to be able to beat him and I’m finally starting to get there”

2017 Canoe Sprint World Champion in the women’s K1 1000m Alyce Burnett (QLD) received the Canoeist of the Year Award Non-Olympic for achievements in the non-olympic classes.

Erin Blanch’s coach and Paracanoe Team coach Andrea King (QLD) was awarded Coach of the Year for the third time in a row. King who provides her time to a number of junior paddlers training out of the Gold Coast’s Varsity Paddlers with national team success across canoe marathon, sprint and paracanoe. Her paracanoe athletes won four gold medals at the 2017 ICF Paracanoe World Championships with the Australian Paracanoe Team finishing as the top rank nation.

The Australian Canoeing Awards not only recognise the exceptional achievements in paddle sports in the elite environment but across a range of categories including adventurous paddlers, instructors and club volunteers.

The Excellence Award is awarded for services to canoeing in either administration or sporting endeavour over a “significant” period of time and this year was awarded to Western Australian Canoe Slalom coach Zlatan Ibrahimbegovic for his outstanding contribution over twenty five years in Australia to WA slalom and to the broader Australian slalom community.

Western Australian Sandy Robson received the 2017 Olegas Truchanas Canoeing Award Award for kayaking 23,000kms on the historic Oskar Speck route from Germany to Australia. The Award celebrates an active or tour which best exemplifies the spirit of Olegas Truchanas, who shared his passion for the natural environment through photography, publishing environmental issues and teaching young people how to face the challenges of life. Robson covered the trip in four stages spread over the years 2011 to 2014 with the longest stage covering 4233km (Germany to Cyprus) and the shortest covering 2240km (Indian West Coast and Gulf of Mannar).

Australian Canoeing’s awards night also recognised the Master Canoeist of the Year and Instructor of the Year.

“It’s been an amazing night celebrating the Hall of Fame together with the Awards and all the history coming with it. There are a lot of people that I knew but I didn’t know their full story so that was really lovely.” Canoeist of the Year Jessica Fox said. “I think everybody learnt a lot tonight and it’s great to reflect on the history in our sport and to celebrate the achievements of the inductees, the current athletes as well as the volunteers, who work behind the scenes.”

The 2017 annual awards were presented at a Gala Dinner at the Mantra Legends on the Sunshine Coast on Saturday, 4 November 2017.

See a list of finalists for the 2017 Australian Canoeing Awards winners here: