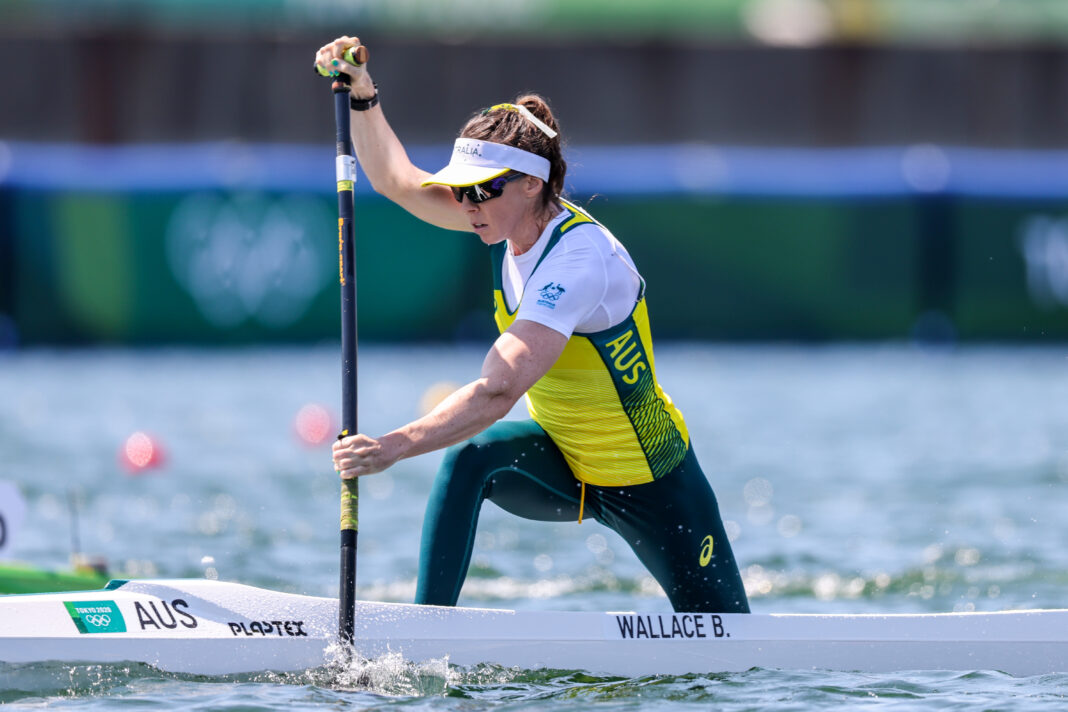 Jumping head first into the sport, Bernadette quickly found her way onto the Australian Junior team in 2006 and 2007 seasons, before moving into the senior ranks in 2008.

Her bid to make the Rio Olympics was cut short due to a health scare, however her Olympic dream was far from over.

In good health, Bernadette moved to Ottawa, Canada in 2016 to coach canoe and kayak at Rideau Canoe Club (RCC).

By chance while working there, Josephine Bulmer and a team from SASI booked a training camp at RCC while preparing for U23 World Championships. Bernadette was invited to join in training and soon after decided to return to Australia to pursue the Olympics once again, but this time in a canoe.

Her 14-year career was highlighted by a history-making feat at the Tokyo Olympic Games, where she and Bulmer became the first Australians to compete in the women’s C boat class at an Olympics.

However Bernadette will not be a stranger to paddling, having been selected earlier this year as one of 16 coaches to take part in this year’s Australian Institute of Sport (AIS) Gen32 Coach Program, which focuses on professional development for Performance Pathways coaches.

In her new role, Bernadette will work in the South Australian Institute of Sport (SASI) canoe sprint program, as a Talent Pathways and Para Coach within the Paddle Australia National Network.

“One of my motivations as an athlete was to make sure I wasn’t one of the first and last women to race in canoe for Australia,” Bernadette said.

“That legacy was a main motivator for me to keep going as an athlete, and now it’s a natural step for me to go into a coaching role post my athletic career to give back to the sport and support the talent coming through our pathway.

“Before Tokyo, I was heading down to West Lakes and helping out a couple of times a week to stay in touch with the younger group.

“For me at the moment, being a new mum, I couldn’t see a better career for myself than coaching and I’m so grateful to have been given this opportunity,” she said.

Having performed at the top of her sport for so long, Bernadette said she couldn’t see a better fit for herself than the Gen 2032 Coach Program.

“What I liked was it respected a coach’s progress, the same way it did to me as an athlete,” Wallace said.

“I had certain goals and had to do certain things before I could make the Olympic Games as an athlete, and I like the fact that this program provides a realistic progression for me as a coach.

“I’m not jumping in the deep end, I’ve got so much support around me…the fact that I’m a new mother is very welcomed and supported by Paddle Australia, AIS and SASI.

“The network of coaches at SASI, AIS Gen32 and Paddle Australia are very like-minded with everyone sharing their journeys – it’s like a community of coaches to lean on for support when I take that step away from my training squad,” she said.

Bernadette said she is looking forward to working closely with David Smith and Luke Haniford as part of the SASI team.

“Luke and I have known each other since we were 15 years old, and I feel like we’re a team. Smithy and I have been on kayak teams together before, and toured together as a team before,” Bernadette said.

“It’s easy to step into a role as a team in SASI having worked together like that before.

“But I think what’s extra special, and what I really enjoy, is realising each other’s strengths other than how fast you can paddle or how much you can bench press, like we did when we were athletes. Their strengths as coaches and as people I’m getting to see more and more everyday which is really exciting,” she said.

In her new role, Bernadette said that she sees a key part of it being to inspire the next generation to become not only the best paddlers, but the best people.

“When I was growing up, I didn’t think being an Olympian was ever on the cards for me – I did scouts and arts,” Bernadette said.

“But when I did start paddling, it was the first time I felt like a bigger, stronger, more confident version of myself and I would like to share that with the next generation.

“Sport can give you those kinds of gifts – it’s fun to win the medals but what’s even better is being able to be proud of yourself, make friends and have a healthy lifestyle.

“I’m definitely driven to help them achieve the podium performances, but it’s about so much more than paddling fast…it can lead to a very exciting life and one I’ve been privileged to have and live for so many years,” she said.

“It’s often hard to define, but elite sport helps shape you as a person,” Crane said.

“We identified earlier this year that Berni has the experience, knowledge, skills and personal style attributes to make a successful career transition from athlete to coach.

“Thanks to initiatives like the AIS Gen32 Coach Program we have pathways where expertise and support from the system and sport are in place to meet the needs of young emerging coaches.

“Berni is more than the title of athlete, mother, and coach…she’s a phenomenal woman doing incredible things to inspire both our talented athletes and the wider paddling community, just as she inspired a nation when she raced on the world stage,” she said.