Paddle Australia’s 2022 Annual Awards Night is just around the corner, and we’re pleased to announce the finalists for the Community award categories.

The Paddle Australia (PA) awards evening is a fantastic opportunity to not only celebrate the high performance athletes and support staff’s successes over the past twelve months, but to also pay tribute to those coaches and officials at the grassroots level who display excellence in their everyday role.

South Australia’s Jayden Ellis, from West Lakes Paddlesports Club, has assisted throughout the year coaching both the Club’s Junior Development Squad, as well as providing coaching support to senior members. He has also been the Lead Coach for both the club and State  Parapaddling Programs. While helping train members of his squad for the Asia Pacific Cup Canoe Sprint Team and National Development Squad, he also provided valuable backfill support when the State Development Squad Coach was seconded to the South Australian Sports Institute (SASI) for six months.

Heading west, Beau Lewis moved to Busselton in WA in 2020 and ran Paddle Western Australia’s ‘South West  Development Program’. The program became so successful that the group turned into the Geographe Bay Paddling Club, and is now WA’s most thriving club outside of the metro area. Since moving to Busselton, Lewis has completed his Foundation Coaching Course, and is now coaching junior and senior paddlers on both ocean and flat water. 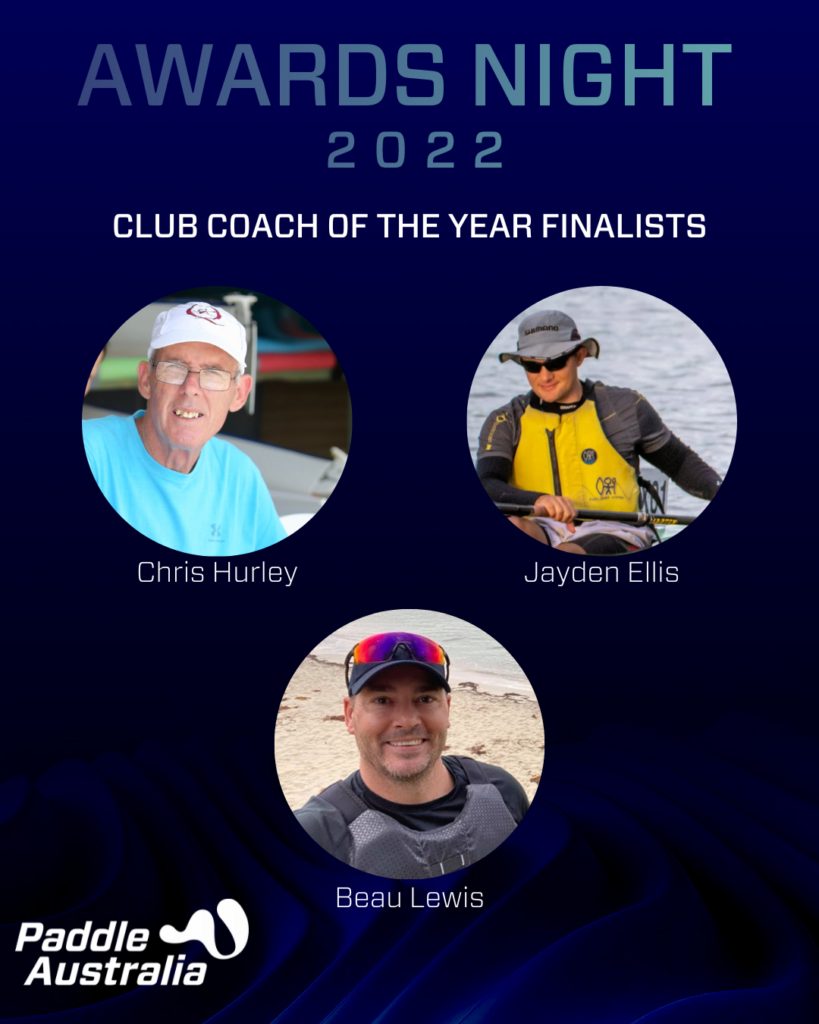 Up north in Queensland, Chris Hurley has supported a number of junior athletes to achieve great success this season. With a number of Sprint National Champions in his squad, a special mention must go to his athlete Jasmine Rayward, who represented Australia at the Junior World Championships in Hungary. He currently runs training sessions at the Lake Orr location four mornings and two afternoons per week, dedicating his time to develop paddlers of all levels.

Along with his wife Brenda Hurley, who is a finalist for Volunteer of the Year, the pair have been instrumental in the  development of Juniors at the Lake Orr location of Currumbin Creek Paddlers, many of whom have competed at state / national / and international levels, and have attracted many new paddlers to the sport. Brenda and Chris have also hosted international paddlers at Lake Orr, run local competitions, and supported athletes to compete at the national and international levels.

The Volunteer of the Year award is one of the most hotly contested awards of the evening.

Laura Kleinrahm and Adam Hofmeyer (NSW) have been also announced as joint finalists for the award, alongside other finalists Mark Loram (SA), and Kristopher Smith (WA), in addition to Brenda and Chris Hurley. 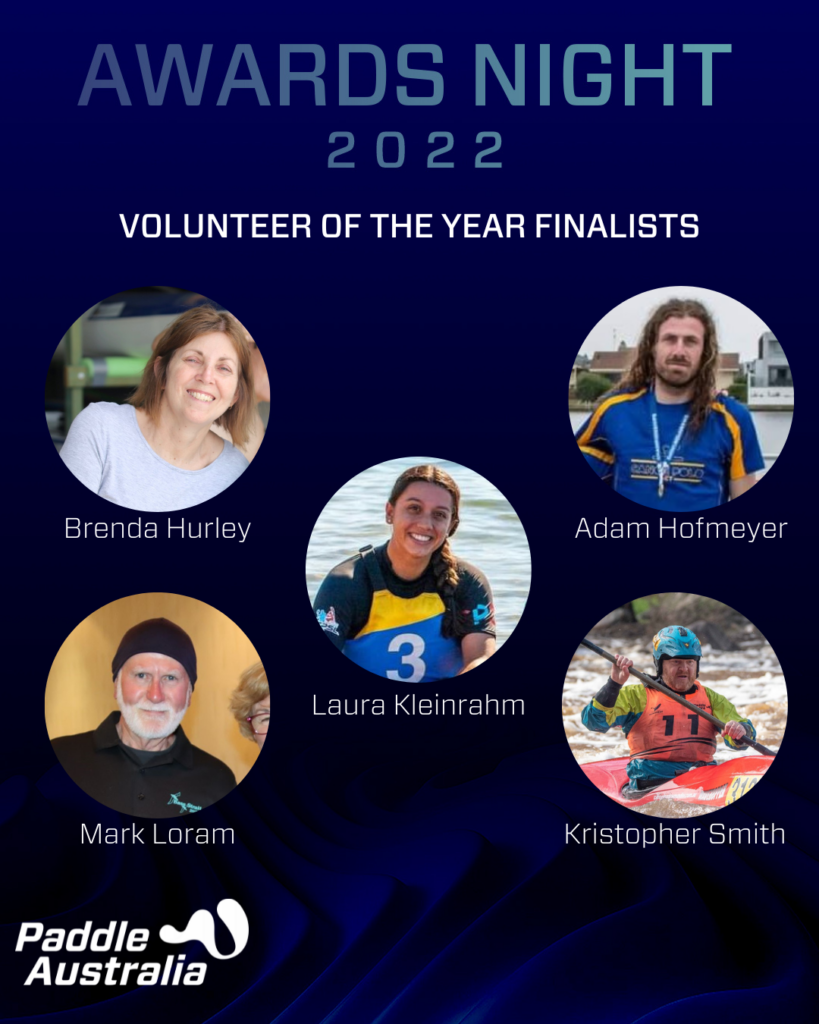 Canberra’s Laura Kleinrahm and Adam Hofmeyer have been instrumental in the growth of Canoe Polo in their local community. Laura has run a canoe polo development program that has doubled the number of female participants in the club. Adam coaches canoe polo multiple times a week from beginner, women’s, B grade and open sessions, and has encouraged a number of juniors to transition to A grade by mentoring them in open division teams. Both Laura and Adam continue to help rookie paddlers with equipment needs, including transportation of club boats to the pool and interstate competition, provision of  their own equipment where there are Club shortages, and the coordination of personal equipment purchases to reduce transportation costs.

As President of the Adelaide Canoe Club, Mark Loram tirelessly and relentlessly promotes paddling to new and current members in South Australia. He provides leadership and strategic direction to the club committee to ensure the club members are provided with ongoing paddling opportunities throughout  the year. His ability to provide positive vision to the club’s future and inclusiveness to all is what makes it a happy and welcoming environment that nurtures and maintains club paddlers. Mark also led the development of a new club website, which has been a great asset to the promotion of the Club.

When the 2022 Australian Wildwater Championships were held in Western Australia for the first time in 19 years this year, Kristopher Smith was there to bring the event to life as the event coordinator. Not only did he run a smooth event for over 50 paddlers, Kris also introduced live streaming to increase awareness and exposure of the competition. Outside of major events, Kris coordinates his local WA Wildwater season and has recently been named Vice-Chair of the PA Wildwater Technical Committee.

The Club Coach of the Year and Volunteer of the Year winners will be announced on Saturday night in Sydney, along with the Instructor / Guide of the Year, which has two finalists; Anne Langsford (SA) and Allana Bold (QLD). 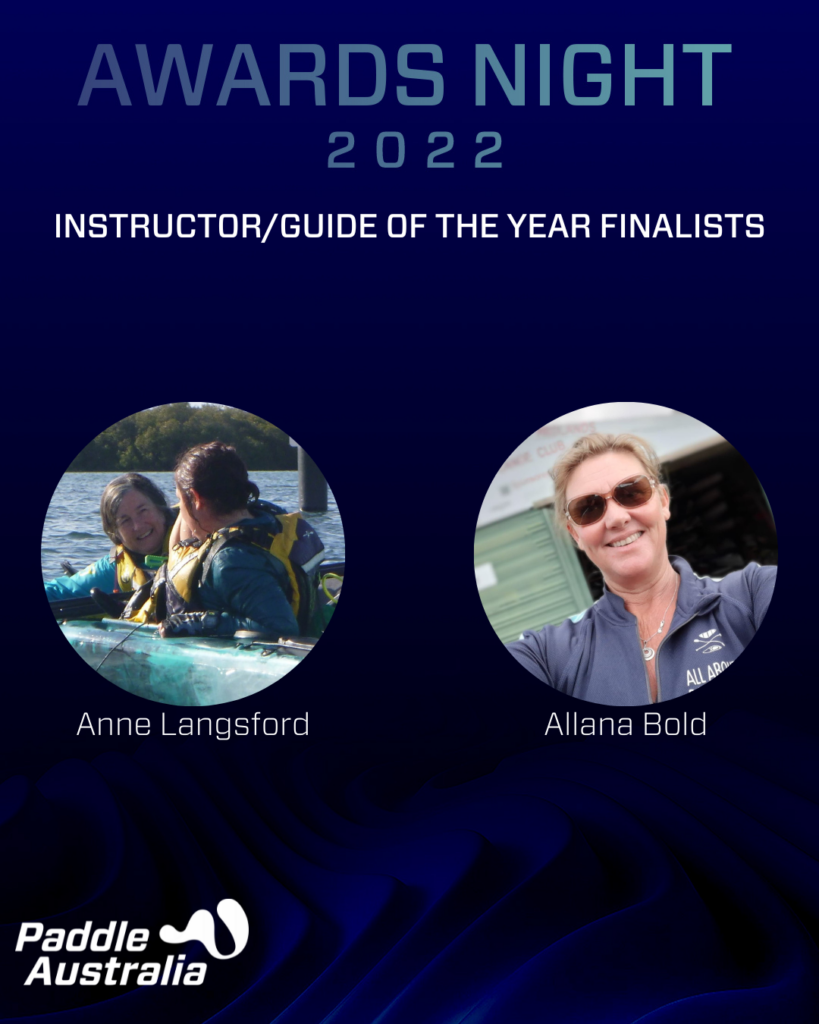 Anne Langsford is a highly respected member of the Paddle SA’s Education and Safety team who generously gives her time to instruct school and community programs. Anne obtained her Sea Instructor qualification this year and has demonstrated exceptional commitment to skills training, including beginner rolling sessions. Alongside her husband Simon, she has been a  leading force in Basic Skills and Rescue Training for new paddle members, while also facilitating regular canoe polo training sessions at schools, and providing kayak skills training to young members of the local community.

Allana Bold has guided high schools students in Queensland through the Pumicestone Passage program. In a program designed to allow students independence, and encourage them to take on more responsibility as they progress through the five-day program, Allana’s preparation, knowledge of paddling and commitment to engaging the students, provided a smooth journey filled with excitement, age-appropriate challenges and education-focused learning outcomes.

All community award winners and high performance award winners will be announced on Saturday 29 October at the 2022 PA Awards Evening in Sydney.