Home General #MyPaddleOZ | On The Water With Canoe Sprint Officials Tracey Tapscott and... 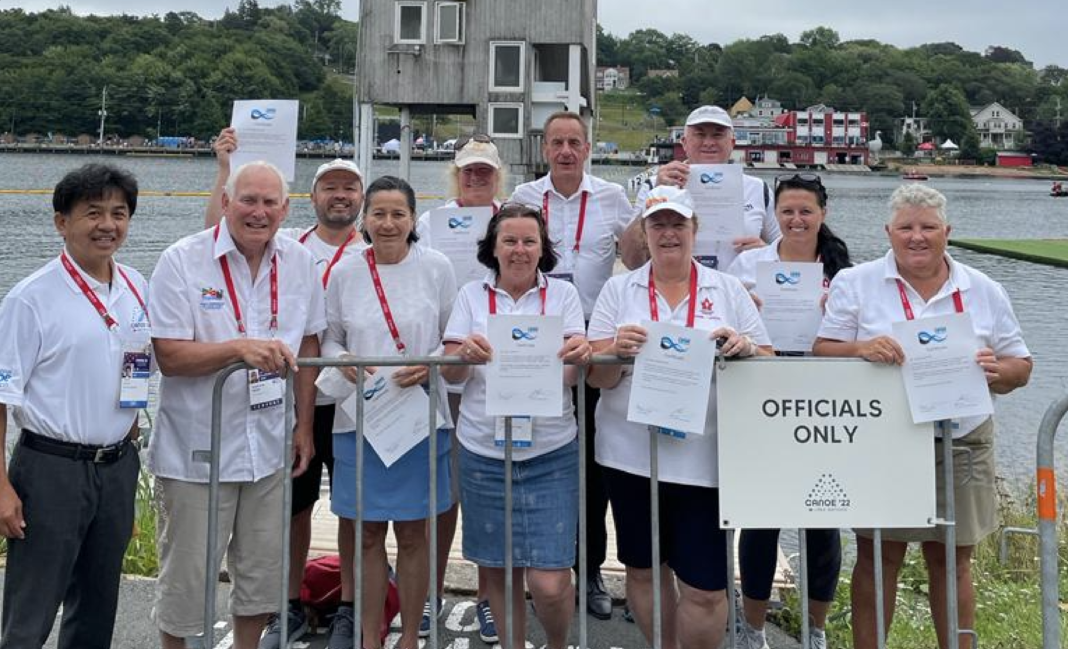 The ICF 2022 Canoe Sprint World Championships in Canada have just wrapped up and Australia had a hugely successful campaign, and it wasn’t just our Aussie athletes flying the flag.

There are only 1-2 active and qualified ITOs from Australia, so this is a great example of a pathway for more people to get involved especially in the lead-up to the 2032 Olympics in Brisbane.

Mark Bulmer and Tracey Tapscott both became passionate about the sport of Canoe Sprint through their children and were nominated by Paddle Australia to register for the seminar.

“Like all sports and community events, volunteers are critical to providing the planning, preparation and running of Canoe Sprint events. Revenue to run such events is limited and it is almost impossible to operate as a fully self-sustaining commercial enterprise,” Bulmer said.

There are two parts to the seminar, theory and practical which ran over the five days of competition.

Mark and Tracey were given hands-on experience and tuition in the roles of ID Control, Aligner, Starter, Umpire, Finish Line Judge and Boat Control. The Starter’s position at the 1000m start line and Tracey working as a Finish-line Judge.

“Officiating is a more formalised volunteering role, which requires knowledge of the structure and rules of the sports and ensures that events are run consistent, fair, safe and in a time-efficient manner,” Tapscott said.

To successfully complete the course, the theory and practical components had to be accomplished.

The theory involved learning the ICF Statutes and ICF Canoe Sprint Rules to then complete two online assessments with a 70% pass mark.

The practical component involved working directly with existing ITOs in all aspects of competition officiating and attending daily pre-competition meetings. “We have found it to be a very rewarding and enjoyable experience, whether at a state or national level and now at an international level,” Bulmer said.

Back at home, Mark and Tracey are passionate about their involvement in the sport and have spent a lot of time volunteering at their local and interstate competitions.

In 2014, Mark was elected as the President of the West Lakes Canoe Club which he held for 3 years and was appointed as a Director on the Paddle SA Board, which he still serves today.

Tracey has served on the committee of West Lakes Canoe Club from 2014 to 2017 and the Paddle SA Flatwater Technical Committee since 2015, performing the role of Sprint regatta programming and results.

“Throughout my involvement, I have received invaluable mentoring in the different roles by Mark O’Brien, Ian Hume and Jim Murphy, all long-term stalwarts of our sport and this has provided the foundation for moving to become an ICF ITO,” Tapscott said. “We have made many friends who were involved in the Canoe Sprint events in the lead-up to and during the Sydney 2000 Olympics.

“Speaking with them about the whole experience underlines the importance of officials to the success of such a high-level international competition.

“This will be the same for Brisbane 2032 and we need to start to facilitate the recruitment and training of local personnel to become ICF ITOs in the lead-up to the Games,” Bulmer added.

“Our experience in Halifax exceeded expectations and has only strengthened our commitment to Canoe Sprint.

“We are very excited about our path to Brisbane 2032, which continues with the 2022 Asia Pacific Cup Regatta in Japan in October this year, which we have been invited to attend as ITOs for the first time,” Tapscott added.