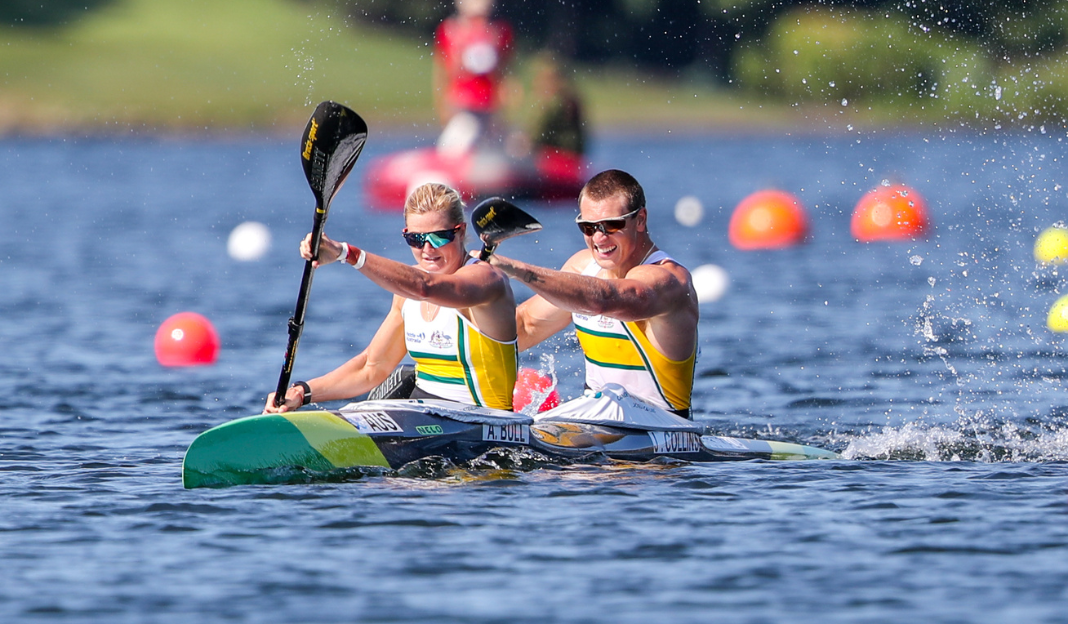 Australia has capped off their 2022 ICF Canoe Sprint & Paracanoe World Championships campaign in sensational style with two gold and one bronze medal on the final day of racing in Canada.

Dual Olympian Aly Bull produced two gold medals, kicking off with the Women’s K1 1000 before teaming up with Jackson Collins to take gold in Mixed K2 500.

Olympic champions Tom Green and Jean van der Westhuyzen once again paired up to finish with the bronze medal in the Men’s K2 500.

The three medals on the final day of racing took Australia’s medal tally from the World Championships to seven, with three gold, two silver and two bronze medals.

For Bull she’ll walk away from the World Championships with two gold and a silver medal, and she couldn’t be happier.

“It’s been a good day. I really wanted to have a good start [in K1 1000]. I knew it was going to be long and I had to keep it strong but I also just wanted to save some energy for our Mixed K2 which was a really tight turnaround.

“The team here is awesome, with nutrition and physio and I can’t thank Kate and Steph and coaches and everyone so much for moving mountains for us to make our job look easy,” she said.

For Collins, he couldn’t wipe the smile off his face after winning the gold medal and says “he doesn’t want to ever take it off.”

“It’s awesome, every time I think about it, I keep smiling. It’s such an amazing feeling to be able to go out there and race with Bully and now to be World Champions together,” he said.

In other results, Georgia Sinclair finished second in the Women’s K1 200 B Final and Lachlan Armstrong 7th in the Men’s K1 222 B Final.

Yesterday Australia delivered silver in the Women’s K4 500 and another silver from Olympic Champion Jean van der Westhuyzen in the Mens K1 500.

Paddle Australia’s National Performance Director, Kim Crane, said with just two years out from the Paris Olympic Games there are great signs both on and off the water for the team.

“To be honest, results here have been a bonus, rather than an expectation. We’re still leading and navigating considerable change across many critical elements of our program, and ensuring our people, athletes, coaches and staff are happy, supported and able to thrive is our highest priority,” said Crane.

“While 3 gold, 2 silver and 2 bronze medals is absolutely fantastic, the goal has been on building multiple high performing boats across events and establishing a culture to set us up for success across the whole Program, Sprint Men/Women and Para.

“We’re only seven months into implementing our new strategy, where our Sprint Kayak Program is focused around a centralised National Centre of Excellence model which creates a competitive daily training environment on the Gold Coast and in Europe to support both individual and team boat development.

“Our Para Program relies heavily on our nationally co-ordinated approach and to be able to provide the individual support for athletes that we do, we need strong relationships with our national network partners of AIS and State Institutes and Academies who are such an important part of our overall success.

“We absolutely love that our Sprint and Paracanoe athletes are embedded together into the competition environment and team”.

“Our Coaches are masterful at how they provide different race experiences to build athletes performance confidence, whilst also exploring different crew combinations. The passion, expertise and personal investment of our Coaches, along with Staff here on the ground and at home is truly valued.

“We complete these World Championships with everyone’s energy well and truly up, celebrating our World Champions Ben, Bully and Jacko, as well as our medalists and those who hit personal bests; but we also understand there’s a long road ahead.

“Our performances here will provide motivation for us all to keep showing up to do the work, whilst maintaining a growth mindset and commitment to lead together as one team.

“We’ve come a long way together as a group in seven months but there’s still so much work to do but bottom line, I’m excited about where we’re heading as a team and as a High Performance Program and am grateful for everyone’s effort.” she said.