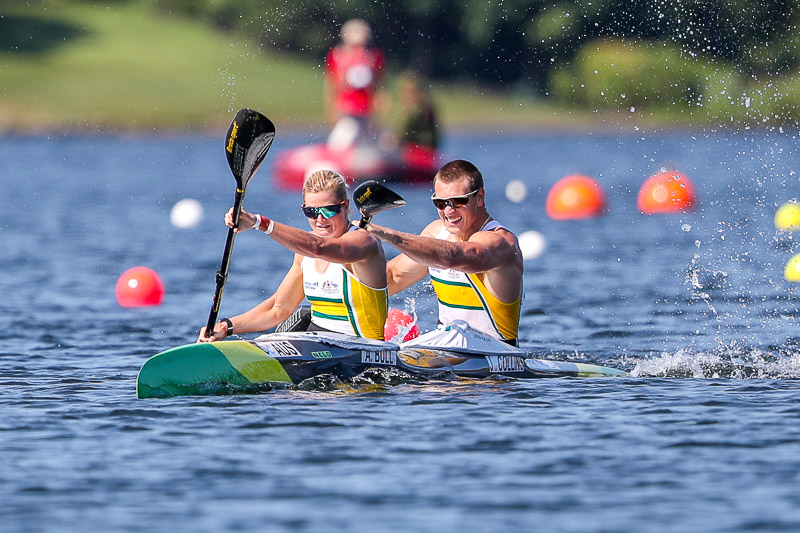 Australia has continued its impressive form at the ICF Canoe Sprint and Paracanoe World Championships in Canada, with all Aussies advancing in their respective disciplines.

Following on from day one success that saw Paracanoe sensation Ben Sainsbury claim gold at his World Championships debut, Australia continued to deliver impressive form on the world stage.

The 17-strong team from Australia has not only been focused on delivering on the water but also getting around their teammates, with the green and gold crew support crew on point.

In the newest discipline, the Mixed K2 500, Aussie duo Aly Bull and Jackson Collins have qualified fastest through to Sunday’s final.

Collins said that they are pleased with their times and are hoping to build on their bronze medal secured during the World Cup.

“It feels really good, it feels nice that we are going really fast, especially into that head wind which I think suits us a bit more.

“We came third in the World Cup to the crew that were in our heat [today] so it’s good to get one up on them and it’s nice to know we’re going fast,” he said.

“I’m feeling good, it’s been a fun day here. It’s been a long races, but we had a good game plan to go out hard and then just try and stretch it out because we knew it was going to be longer [day].

“It’s a really cool event to be able to race together… It’s something different and really fresh. I really enjoy doing it and I’m stoked for Sunday [finals].

Making her World Championships debut, Kathleen O’Kelly Kennedy has qualified for the Final in the Women’s KL3.

There were mixed feelings for O’Kelly Kennedy as she crossed the line, not quite sure if she was going to advance to the final.

“It’s pretty surreal to be through to the final. When I crossed the line I didn’t think I’d made it.

“So I was processing that and I looked over and Anna [Wood] gave me the thumbs up so I hoped I was through… it was an emotional rollercoaster at the end,” she said.

The former wheelchair basketballer has come into her first Australian Canoe Sprint and Paracanoe team that boasts a strong support crew, and she couldn’t be more impressed by the culture within the team.

“Everyone is getting around each other and everyone is doing so well.

“I’ve never been part of a team where able-bodied and disabled athletes are all together… we are one team. We are all supporting each other and it’s just a great feeling,” she said.

Racing will continue on Lake Banook from August 5-7, in Dartmouth, Nova Scotia.