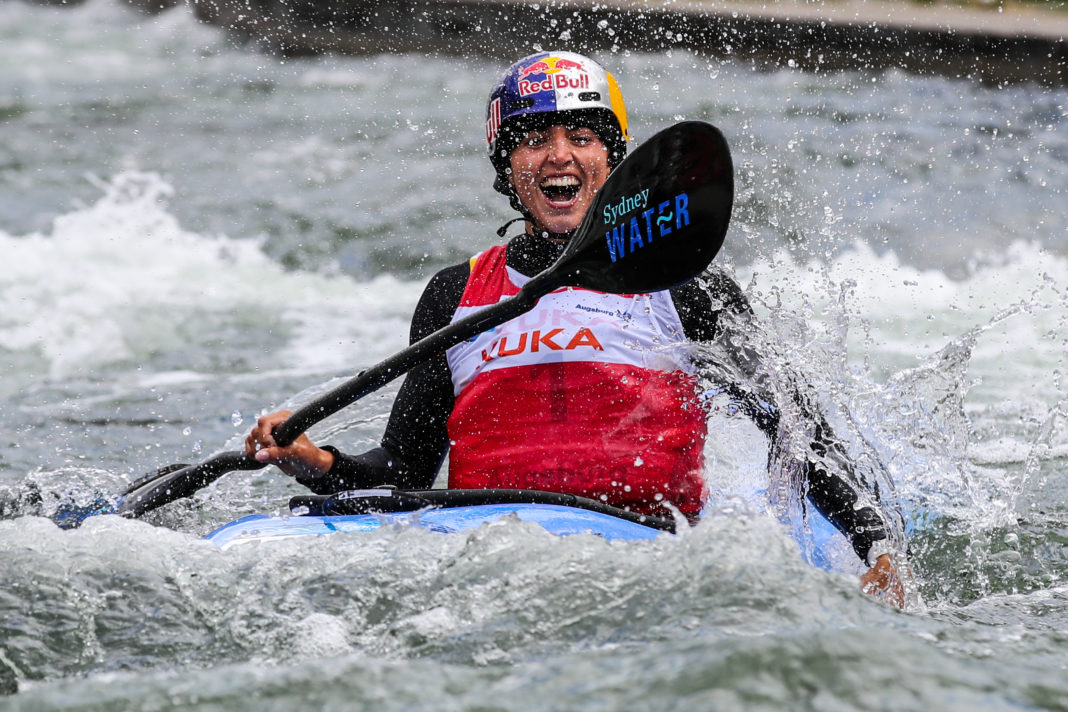 Jess Fox has wrapped up the 2022 ICF Canoe Slalom World Championships winning gold and adding another silver medal on an exciting final day of racing in Germany.

In an impressive performance, Fox defended her 2021 World Champion title in the extreme slalom after coming second in the women’s canoe (WC1) earlier in the day, bringing her overall world championships medal tally to three after already winning silver in the women’s K1 (WK1) on Saturday.

Extreme canoe slalom will premier as an Olympic event at the Paris 2024 Olympic Games and after two subsequent world championship titles, Fox is firming up as one of the favourites.

The Olympic C1 champion, added gold in the extreme slalom to her weekend kayak and canoe silver medals with a hard-fought win in the women’s extreme slalom final.

In the women’s C1, host nation favourite Andrea Herzog took home the gold while Great Britain’s Mallory Franklin rounded out the podium.  Fox, Herzog and Franklin all finished on the podium at the Tokyo Olympic Games, only in 2021 it was Fox (gold), Franklin (Franklin) and Herzog (bronze).

While the Olympic Champion didn’t have her strongest start in the C1, she stormed home in front of a roaring crowd of more than 8000, narrowly missing the gold medal by less than one second.

“It’s been an amazing weekend here in Augsburg and I can’t quite believe I managed to pull that off in extreme and to back up the world title. It’s always such a battle out there in extreme but the crowd was amazing. You just have to keep taking it round by round and I guess I was carried by the crowd which was amazing.

“It’s been just incredible to race here, there was so much atmosphere and I’m so pleased to come away with three medals.” Fox said at the end of the competition.

“For the kayak and the canoe, it was always going to be really tough to beat the Germans on their home course and I wanted to give it the best shot I could. I’m really pleased with the way I raced and I enjoyed every second out here on the water.”

“I’m so pleased with this and so grateful to become world champion on the same course as my dad in 1985. I finally got it which is very cool and I can’t thank everyone enough for the support.”

In the C1 final, Jess Fox was joined by her sister Noemie Fox, who finished a strong eighth. Tasmanian Kate Eckhardt narrowly missed the final in 13th place in her first ever world championships women’s canoe semi-final.

With one gold and two silver medals Australia placed fourth on the overall medal rankings.

Paddle Australia National Performance Director Kim Crane said: “What an incredible experience it’s been for our team competing here at ICF World Championships. We’re so proud of all of our athletes who’ve represented, with three medals and many world class performances on an exciting and challenging course.

“We celebrate our athletes’ outstanding performances and acknowledge our team of coaches and staff who work tirelessly behind the scenes supporting them to become the world’s best paddlers and people. Whilst competing as individuals, this group of athletes and staff are united, showing up for each other on a daily basis with long periods of time away from home whilst working together as ‘one team’.

“I’m in absolute awe of this venue and can’t help but admire this blueprint example of a powerful Olympic legacy; masterfully designed 50 years ago, creating a special place using hero elements of the environment, not just for the 1972 Olympic Games but also the wider Augsburg community.

“We aspire for this vision back home in Australia with our Brisbane 2032 Legacy (10+10) planning where nationally co-ordinated facility enhancements like the revitalisation of the Penrith Whitewater Centre kick started by the NSW Government and the new Queensland development of the Redlands Birkland Community project will ensure sustainable Canoe Slalom Program success with events, community, pathway and high-performance initiatives.

“It’s time now for our athletes to quickly recover and reset before World Cup 4 at the end of August. The 2022 ICF Canoe Slalom World Championships event has been a tremendous success for our team with the fourth place on the overall medal tally, placing us in a great position as we get within two years to go for the Paris 2024 Olympic Games,” she said.