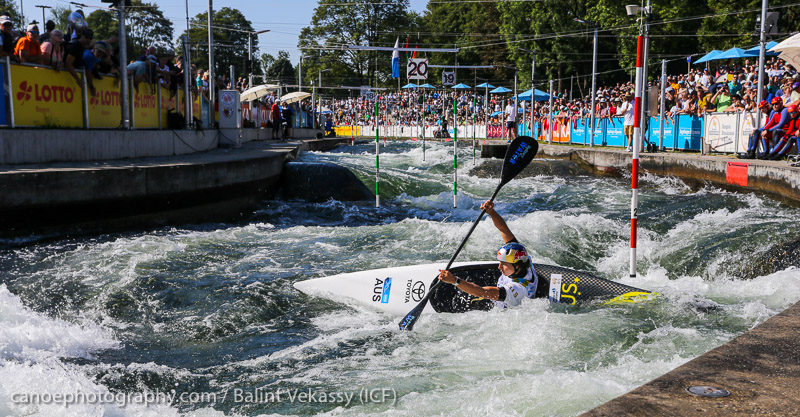 Jess Fox channelled family history at the iconic Augsburg white water venue, to take out the silver medal in the Women’s K1 at the 2022 ICF Canoe Slalom World Championships in Germany overnight.

At the same venue that saw her father Richard Fox claim the gold medal in the Men’s K1 in 1985, Jess kept the ‘fierce Fox’ reputation alive to deliver another impressive podium finish.

Fox said the history of the venue combined with the energetic crowd made for a very special day.

“I put down a good run, until the last up left where I made a mistake and lost my paddle for a second… a silver medal, I’m really proud of the way I raced,” she said.

With her dad Richard in the crowd, Fox said she drew inspiration from his track record at the venue.

“It is so special to race here in Augsburg and I tried to channel the ‘fierce Fox’ I know he was in 1985 when he won here,” she said.

The Augsburg venue hosted the 1972 Munich Olympic Games, with the venue considered one of the best on the international circuit.

Not only were alumni from the Munich Olympic Games in the crowd to support the next generation, International Olympic Committee President Thomas Bach was also in attendance and one of the first to congratulate Jess on her silver medal.

The day saw five Aussies line up in the Semi Finals and despite delivering strong performances, Noemie Fox, Tim Anderson, Ben Pope and Lucien Delfour didn’t qualify through to the final.

Reflecting on his World Championships races, Anderson said he has enjoyed the experience.

“I’m happy with my paddling, I think I paddled quite well.

“It’s been awesome [the World Championships], I’ve loved it. It’s a great atmosphere here, huge crowd, really nice place to paddle, probably one of my favourite in the world,” he said.

The Aussies wrapped up the day with the qualifying for the Extreme Slalom, which is set to make its Olympic debut as a discipline in 2024 in Paris and with Jessica Fox qualifying with the fastest time in the time trial. Tim Anderson also went straight through to the head to head knockouts scheduled for Sunday afternoon local time, qualifying in tenth place in the men’s kayaking time trials.

Jessica Fox, together with Noemie Fox and Kate Eckhardt, will also return to the start line for the women’s canoe semi-finals on Sunday.