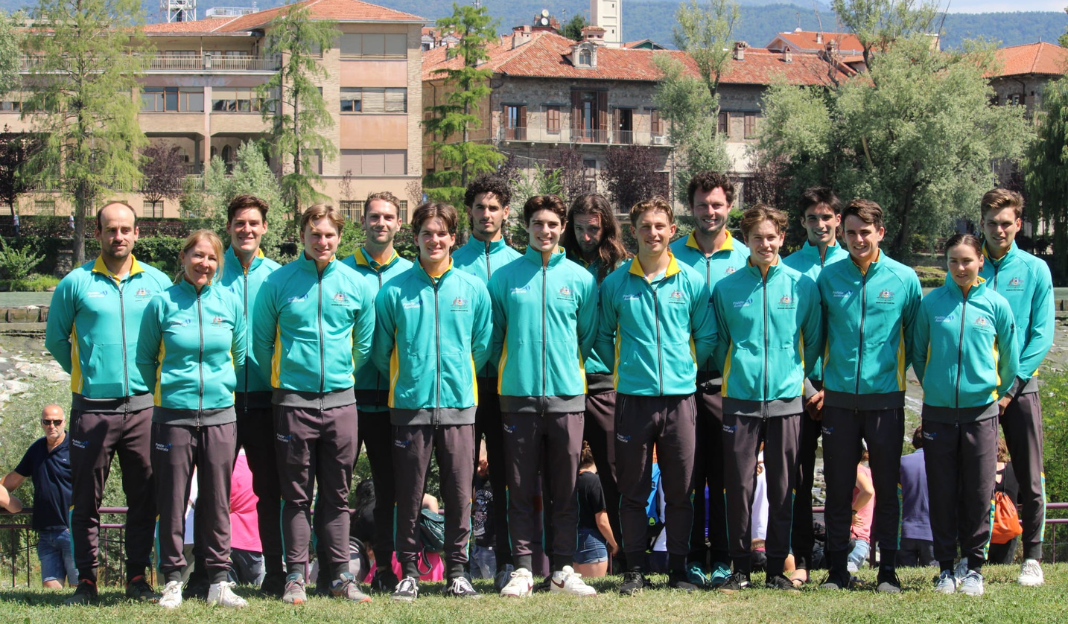 The 2022 ICF Junior/U23 Canoe Slalom World Championships came to a close over the weekend in Ivrea, Italy, with one new Australian Junior World Champion and an invaluable international experience for the entire team.

The new Head Coach of the National Junior and U23 Canoe Slalom Team, Titouan Dupras, said he was extremely pleased with the performance of the whole team, especially considering the challenges they’ve faced over the past few years with the on-going COVID pandemic, and natural weather disasters limiting access to the Penrith white water facility.

“After three years without exposure to competitions and international standards, the junior and U23 team finally had a great opportunity to compete in Italy,” Dupras said.

“It was hard for the team to set expectations, but with great results overall, this experience has put Australia back among the strongest slalom nations, especially with the gold medal performance of Mark Crosbee.

“This first experience as head coach of the Australian team was great and I am really satisfied with the team culture we set in the group. All the athletes were involved in creating a good and balanced dynamic and we had a great sense of team spirit,” he said.

A clear highlight of the event was Mark Crosbee’s gold medal winning Junior C1 performance, which the 18-year-old was able to share with family and friends.

“Being able to share it [C1 gold medal] with my family, especially after all the setbacks, injury and COVID leading up to this year, was definitely the highlight of the event for me,” Crosbee said.

“The C1 also gave me my first experience of a World Championship final which was a great learning experience of how it feels to be going for the win.

“In K1, I was really happy with my raw pace but two mistakes in the semis left me disappointed. Although it was easy to figure out what I need to work on in order to close the gap to the top guys which nicely gives some clear things to work on.”

Crossbe said his experience in Ivrea has spurred him on to aim for bigger events.

“It was a great feeling to represent Australia after all the hard work I’ve put in, and it meant a lot to bring Australia back to the top step of the podium.

“Moving forward my aim is to push to make the senior and U23 team next year, with the aim of qualifying for the U23 World Championship finals and Paris 2024 Olympics.”

18-year-old George Pankhurst said he was pleased to have achieved his goal of making the C1 semi-finals, and said the experience has left him hungry for more.

“Representing Australia at this level was very important to me as it felt as though all the hard work paid off,” Pankhurst said.

“I am fairly happy with my racing but a mistake in the C1 semi-final left me out of the final, however, going into the event, my goal was to make the semi-final so I can’t be too disappointed.

“I learnt a lot about race prep and what works for me, and as this was my last year in juniors, I hope to make the U23 team next year with the hope of semi-finals and finals moving forwards.”

Teammate Hamish Dalziel is also in his last year of the junior category and said he learnt a lot to help him move into the U23 division next year.

“The best learning experience would definitely be my K1 semi-finals run because there were a lot of mistakes there and a lot to learn from it,” Dalziel said.

“The majority of racing I’ve been happy with my runs, but just a few too many mistakes in my semis kept me out of the final but overall the experience has been very good… especially with the Australian traditional hair cut, the mullet,” he joked.

Australia results at the Junior & U23 Canoe Slalom World Championships