Home General #MyPaddleOz | On The Water With: Richard Barnes paddling from Australia to... 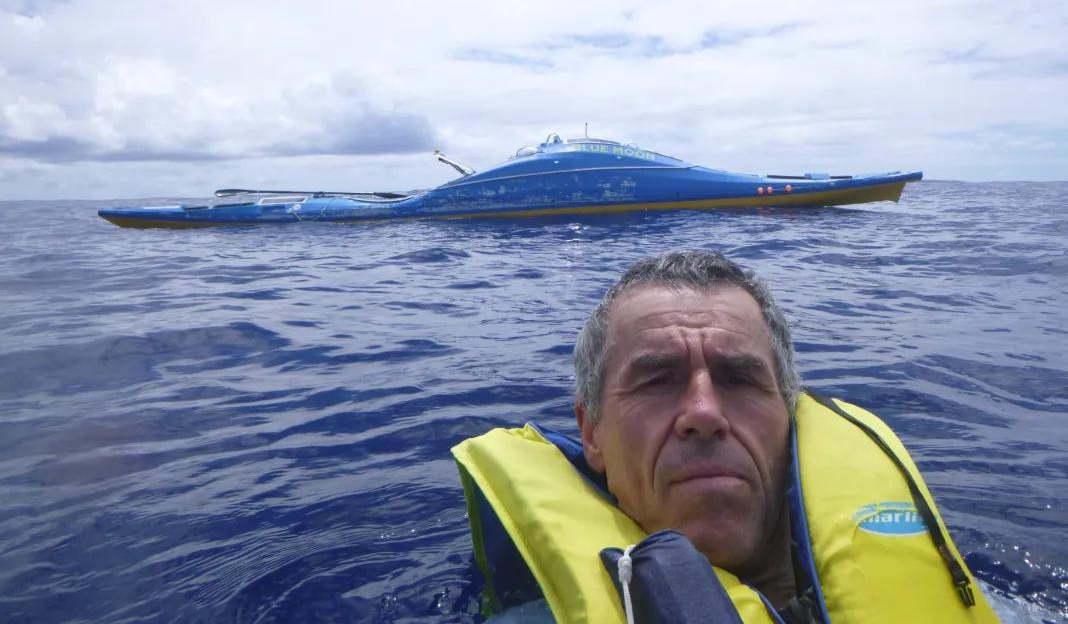 Richard Barnes is an experienced paddler with many stories to tell from paddling on six of the seven continents. Thriving on adventure, his latest challenge involved designing an ocean kayak that he could paddle from Sydney to New Zealand.

A great amount of time – seven years to be exact – and research was put into his equipment choices and trial expeditions. His kayak, ‘Blue Moon’, was crafted alongside the help and knowledge of local legends and was ready to take on the 2200+ km journey across the Tasman.

With a crucial land support team consisting of Chris Stanley, John Bowe, Phil Newman and Greg Smith, a plan was made, “to extend sea trialling by heading northward up the coast to Port Macquarie, and then veer oceanward via Lord Howe, keeping options open in the early stages for landing and repairs should they be needed,” Barnes said.

The south-setting current and headwinds set off for a slow start with cruising speeds of a mere 3km/h. Although it took 25 days to coast-hop northward, Richard made the most of settling into his surroundings and preparing for the bigger journey ahead.

“This was a glorious start to the adventure, regularly meeting up with kayaking friends who came out to meet and paddle with me all the way up the coast,” Barnes said.

“Some nights I stopped in sheltered moorings, whilst others I drifted, usually backward, on the currents close offshore.

Food was tactical but not so appetising, Richard explained.

“Weetbix for breakfast, vitaweats for lunch, and a smorgasbord of soup and desserts around a dehydrated main dinner meal. A can of coke was my luxury treat each evening.”

Come December, Richard was finally free to leave Australia. Nothing but the horizon in his sights and his spot tracker sending out position updates every 10 minutes. He had everything sorted from his solar panels storing a full charge to his amended rudder system increasing robustness. The days were rewarding with nothing but the sea, sky, sun, and stars.

Richard’s route took him almost to Lord Howe Island where on a sunny day, he would have been close enough to spot Mt Gower. Mother nature however, soon alarmed his land support crew as Cyclone Seth was nearing. Richard was forced to turn around and paddle as far away from the storm as possible.

”I experienced the highlight of the expedition, just enough ocean roughness to be exciting, without being intimidating or boat-breaking,” Barnes reminisces.

The sun rose again with 360-degree ocean views. However, it was not meant to be.

“After nearing Lord Howe, they told a story of being played with by currents and wind, like flotsam, looping back toward the Aussie coastline. There was a distinct lack of meaningful progress, particularly when the current was faster than my paddling speed and the net result was reverse motion,” Barnes explains.

40 days later, Richard looked to his compass for comfort in his progress but realised the destination was now out of reach. He reconnected with the mainland at Port Stephens and refuelled on some more substantial food.

The East Coast current swiftly helped him back down the coast in 10 days where he was welcomed by supporters with open arms at every port of call.

“Newy Paddlers were there on Newcastle’s breakwater to guide me in even when I arrived well after dark. Such support was heart-warming even after not making the target of New Zealand,” he said.

The trip may not have been what Richard set out to achieve but his ever-growing passion for paddling will always be his best reward. He reminisces on the worst part being that his anchor wrapped around a hatch cover and out flew his precious coke supply!

Richard only needed two weeks back in normal life and work to realise that he needs to take on the challenge again.

“Blue Moon still has plenty of life to live, and New Zealand is still out there over the horizon,” said Barnes.

Keep an eye out for his quest Part 2 to cross the Tasman in December 2022!

Thank you to Paddle NSW and Richard Barnes for sharing this great story.