Home General On The Water With Terry Bolland: the 70-year-old paddling 365 days in... 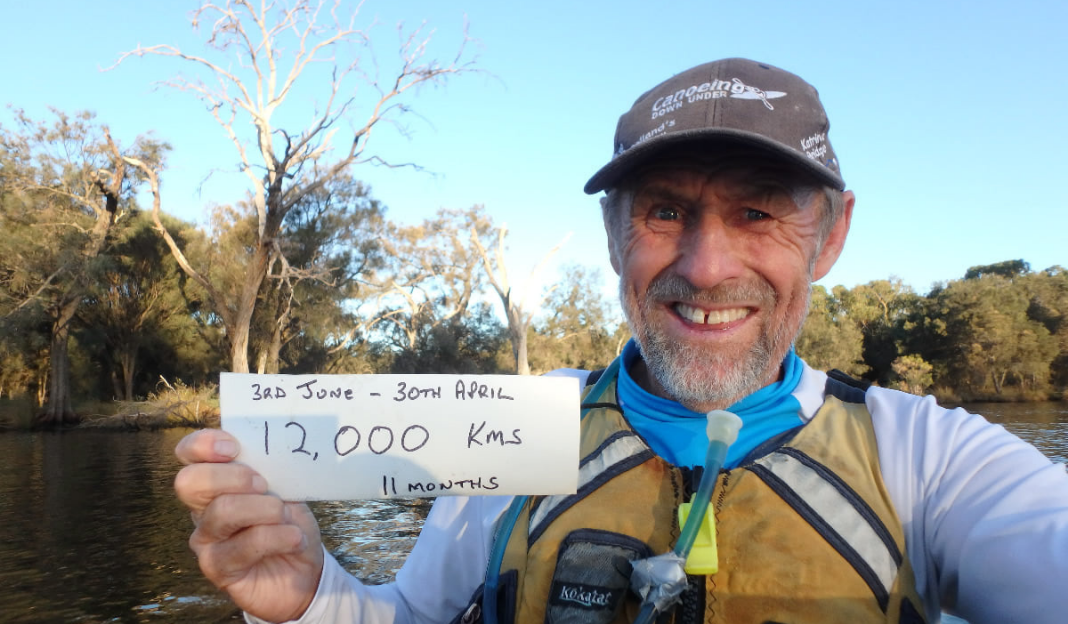 Today, on Tuesday 24 May, Bolland is just 10 days away from achieving his goal of paddling every single day for one year, to raise awareness and money for the Prostate Cancer Foundation.

“It’s quite satisfying to think that I have paddled every day for almost 12 months, without a single day’s rest,” Bolland said. “Although I knew my body has never faulted before on other challenges, I didn’t imagine paddling for a year without some aches and pains or a slight injury, but so far I have had no issues.”

Bolland is indeed no stranger to these kinds of challenges. In 2017 he paddled 2,800km across Canada and the USA, later winning the WA Marathon Championships and the Australian Marathon Championships in the 65+ category. Before, in 2011, he had paddled 6,000km in a year to celebrate his 60th birthday, a feature he repeated five years later (6,500km) and was again planning for 2021, with 7,000km on the agenda.

Except that four years ago, in 2018, Terry was diagnosed with prostate cancer.

“I thought – wow, what will my life be like, from now on?” Bolland said, adding that he is very grateful for the medical attention and the support he received after he made the biggest and most important decision of his life: to have his prostate removed.

“My doctor sent me to get some tests right away. My surgeon was also first class, ensuring a very successful operation and a quick recovery,” Bolland explained.

Three months after the surgery Bolland was paddling again and in 2019 he completed a 1,100km kayak expedition along the West Coast of Canada, before taking home a bronze medal in the K1 65+ class and a gold in the K2 65+ class at the Canoe Marathon World Masters Championships in China.

“I have never looked back. I just keep paddling and living a good life,” he said.

“On 30th April I reached 12,000km and with 33 days left before my challenge was over, my target became 13,000kms. You can help to spur me on by donating to the Prostate Cancer Foundation of Australia.”

Bolland’s ambitious goal is to raise awareness and funds for the Prostate Cancer Foundation, to help research on a disease that threatens the lives of one in six Australian men.

Based in Western Australia and unable to leave his state for most of his 12-month challenge due to COVID restrictions, Bolland soon became a familiar sight on the Swan River, paddling up and down the same 20km section of the river close to his home, on the water that has been his familiar training ground for the last 45 years.

“With no real destination to head to, the Swan River didn’t have the same appeal as paddling the entire lengths of the Yukon, the Mississippi or the several other rivers and great lakes I have paddled on in North America,” he confessed.

Nevertheless it has been an enormous challenge that requires physical and mental strength, patience and endurance, as Bolland spends between five to eight hours on the kayak every day in rain, storms, floods and heat waves. He averages around 40km every day, with the greatest distance paddled on a single day being 70km.

Bolland’s biggest month of paddling was December 2021, where he amassed 1369.03kms. His lowest kilometre week was when WA was in their strictest COVID lockdown, where he still clocked 145.2kms.

“The best parts of the day have been early morning and late evening, when the colours are crisp, and in the evening when the sun is setting. I also paddle a lot in the dark and I love when the winds calm, the moon is out and the stars are bright.

“I’m usually the only one on the river to take in the experience,” said Bolland, who also sits on a number of paddling committees, has authored five books, and finds the time to run a training course at Ascot Kayak Club every Tuesday evening.

“I definitely have to structure my day so I can still fulfil family commitments, including walking the dog and taking care of jobs around the house,” said the 2022 Australian Masters Games dual gold medallist.

Bolland has lived cancer-free for four years, but recent blood tests indicated that his cancer may be returning. He will undergo more tests in June, after his year-long challenge is completed.

His charity efforts have just hit his $10,000 goal, just weeks out from his birthday. And how will he celebrate his 71st birthday the following day, you ask? On the water, of course.

“But I can go for a normal paddle, I won’t have to spend seven or more hours on the river!” he said.

The last few kilometres of Terry Bolland’s challenge will be paddled at the Ascot Kayak Club on Thursday 2 June, at 5pm.

To donate to the Paddle for Prostate Cancer Foundation, visit https://fundraise.pcfa.org.au/fundraisers/terrybolland.

You can also follow Terry on Facebook or read more about his paddle adventures, including his five books, at https://terrybolland.wordpress.com.