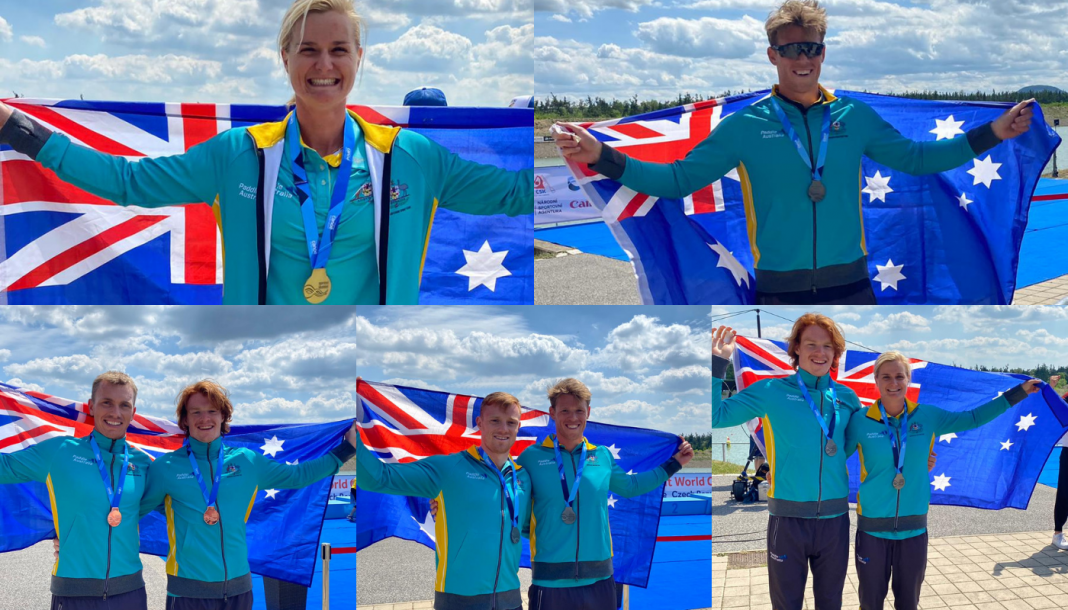 Making a spectacular return to racing after suffering wrist injury during the Aussie summer, Bull was thrilled to kick off her international season with such a convincing win.

“That was a good race. Coming back from injury, it’s probably only been about six weeks back in the boat. I’ve been doing a lot of work on the bike for the last four months, but it feels good to be back.

“I was racing the Surf [Life Saving] Ironwoman Series over the summer in Australia, and tore two ligaments in my wrist.  So that was a bit of a blow, and not quite the start to the international season that we wanted.

Bull went on to team up with rising star Pierre van der Westhuyzen to claim a silver medal in the Mixed K2 500.

“It was an absolute privilege to be representing Australia for the first time, and it was also my first ever international regatta so I wasn’t entirely sure what to expect,” Pierre said.

“Coming away with two medals is definitely not what I was expecting – I was proud to receive those two medals not only because of the work and effort I have put in, but also because of all the time and effort my coaches, physios and other support staff have invested in me.

“As much as it is the athlete that crosses the line, at the end of the day there is definitely a team behind the team,” he said.

Pairing with Noah Havard in the Men’s K2 1000, the young guns took the bronze medal at their first World Cup meet, a feat which Havard said he couldn’t have scripted better.

“It is a huge honour to have made the podium at my first World Cup – having only started the sport last year I would have never in a million years thought I would be in this position.

“It is a great testament to all the hard work put in by my fellow team mates, coaches, support staff and myself,” he said.

Tokyo Olympic gold medalists Tom Green and Jean van der Westhuyzen delivered a silver medal in the K1 500 at their first international competition together since the Tokyo Olympic Games.

Having won the gold in the longer distance event, Jean said the challenge of a shorter distance is one that he and Green welcome.

“There is a lot that changes in this new event, it’s a really big change and requires a different race plan and structure around it,” Jean said.

“But we’re really happy to start it off with a silver medal.

“There is a lot to improve on moving forward, so hopefully we can build off that result,” he said.

It was the second silver medal for Green at the World Cup after finishing second place in the Men’s K1 1000 the previous.

Five medals for the Aussies at the first ICF World Cup puts the squad in good standing heading into the second ICF World Cup that will be held next weekend, 26-29 May 2022 in Poznan, Poland. Australia’s Para Canoe team will join the Canoe Sprint team at the World Cup.