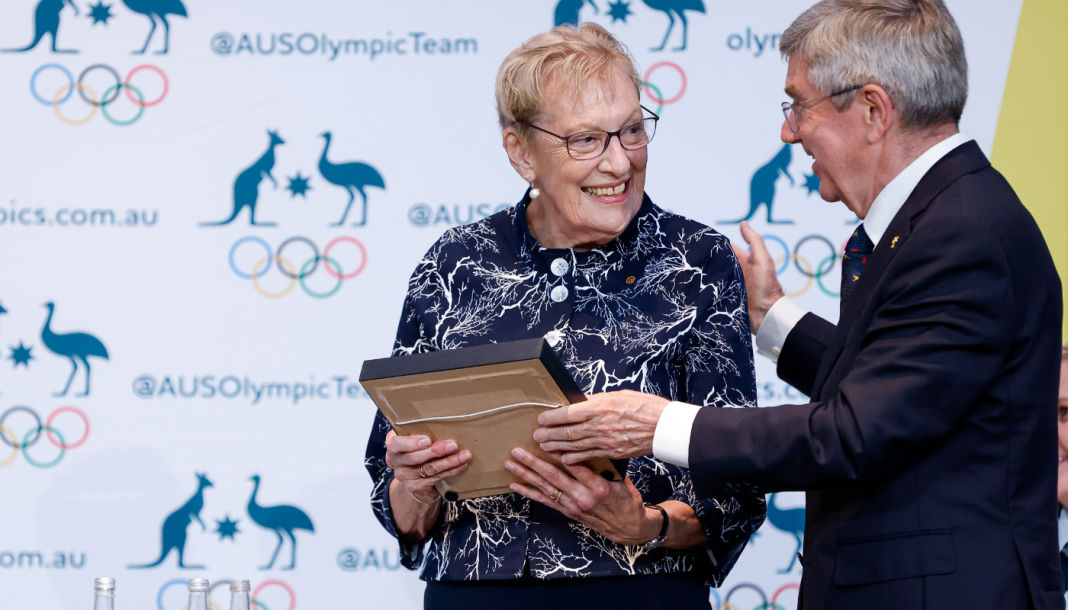 Paddle Australia and Sport Australia of Famer Helen Brownlee AM has stepped down from her role as Vice President of the Australian Olympic Committee, following the AOC Annual General Meeting held last Saturday in Sydney.

Brownlee had served as Vice President since 2013 and was the first woman ever to be elected to the Executive of the AOC, also receiving life membership.

Over a successful 50-year career, she has had a remarkable impact on the sporting community, championing the pursuit of education and gender equity, and collecting many remarkable achievements as she broke new ground for women in sport administration.

A former athlete and the first Australian to win an international canoe slalom event, Brownlee was also the first woman elected to the ICF Canoe Slalom and WildWater Committee, serving as a judge at the 1972 Munich and 1988 Seoul Olympic Games and as a member of the competition jury at the 1992, 1996 and 2000 Olympic Games.

After the announcement, Brownlee told the ABC that she retired from her role within the Australian Olympic Committee with mixed feelings, realising the time had come, but grateful for her amazing time within the organisation.

“Today has been a bit emotional because it was my last Executive Meeting,” Brownlee said on Tracey Holmes’ ‘The Ticket’.

“I’ve really learned a lot from John Coates and I think we leave the AOC in a really good place. It’s a very strong, well-managed organisation.

“I am leaving at a good time. In fact, I have probably been there too long, but I’ve just enjoyed every moment of it and all the opportunities that I’ve been given over the years to support our athletes, cheer them on and commiserate them over their exploits at the Olympic Games, which have been so memorable,” she said.

Among her many achievements, Brownlee is also remembered for playing a vital role in ensuring that Canoe Slalom returned to the Olympic program at the 1992 Games, subsequently working hard to confirm its presence at Sydney 2000 and promote the development of the Penrith course as a legacy training and competition venue.

“To get Slalom on the program for Sydney was a huge thing. We had a small team but we were really committed and determined that we would have the event,” Brownlee reminisced.

“I really take comfort in the fact that the dreams of so many of our athletes became a reality and that venue is still operating.”

Paddle Australia President, Andrea McQuitty, has experienced first hand the tremendous mentorship Brownlee has offered so many in sport and has seen the impact she has had for the paddling community both at home and abroad.

“Helen’s global perspective of paddling, through her involvement at both Paddle Australia and ICF level, has been instrumental in Paddling in Australia being at the forefront of international success,” said McQuitty.

“Her dedication to seeing Canoe Slalom return to the Olympics has benefited not just the paddlers who have competed recently but the generations yet to come.  Her unwavering support of everything paddling, from a global to a personal level, has been of significance to so many across the world.

“Helen’s legacy in the sport within Australia is extensive. She has not just been a leader, but also a mentor who has ensured the ongoing vision, international connection and aspirations for paddlers and the sport that she loves,” she said.

As a female leader in the sport, McQuitty acknowledged the incredible support of Brownlee to other women in sport.

“Helen has led the way for women in leadership positions within national and international sporting bodies.  As a trailblazer, she has proven the value of bringing a female voice into traditionally male dominated boards, and in doing so she has gained the utmost respect from both the Australian and international paddling communities.

“In leading the way, she has opened the opportunity for other women to follow, many of whom she has mentored into various leadership positions.

“As an active campaigner for the inclusion of the Women’s C1 Canoe Slalom event into the Olympic program, Helen has helped to provide a gender equitable competition. It was very fitting that Jess Fox won the first gold medal for Australia in this event in Tokyo,” said McQuitty.

Brownlee’s influence in the Oceania/Pacific region, in the Olympic and canoeing community and in schools has been enormous, including her work in creating the Pierre de Coubertin Awards to recognise secondary school students who are active participants in sport and demonstrate fair play and sportsmanship.

After stepping down from her role with the AOC, Brownlee will continue a career marked by exceptional commitment and dedication to the sport. She has confirmed that she will continue chairing the Equity Commission Oceania (ECO) and she said she feels really proud of how Oceania is now leading all other continents in the promotion of gender equity as they pursue the vision to see women and girls empowered through sport.